University of Alberta running back Ed Ilnicki was honoured with the Hec Crighton Trophy as the Most Outstanding Player in U SPORTS football Thursday night, as the national award winners were celebrated at the annual All-Canadian Gala.

Laval linebacker Adam Auclair was named the stand-up Defensive Player of the Year, Rouge et Or teammate Mathieu Betts was voted the Outstanding Down Lineman for the second straight season, Western linebacker Nick Vanin claimed the Russ Jackson Award recognizing excellence in football, academics and citizenship, and Acadia bench boss Jeff Cummins was selected Coach of the Year for the second time in his career.

The gala held at the Hamilton Convention Centre officially kicked off the ArcelorMittal Dofasco Vanier Cup festivities, which will culminate on Saturday at Tim Hortons Field, where the Laval Rouge et Or and Western Mustangs are set to battle for Canadian university football supremacy starting at 1 p.m. Eastern / 10 a.m. Pacific.

Television coverage on Sportsnet 360, Sportsnet ONE and TVA Sports gets under way at 12:30 p.m. with half-hour pre-game shows. The 53rd U SPORTS championship game is also available online through Sportsnet NOW and TVASports.ca and on the radio at AM900 CHML in Hamilton. 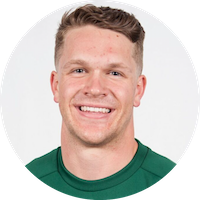 Ilnicki, a 5-foot-10, 220-pound running back from Spruce Grove, Alta., became only the third Golden Bears standout to claim the Hec Crighton Trophy and the first since receiver Brian Fryer, who was honoured back in 1975. Another U of A receiver, Mel Smith, had previously captured the award in 1971.

His selection puts an end to a 10-year domination by quarterbacks, who had won the trophy every year since the crowning of Windsor running back Daryl Stephenson in 2006.

In his fifth and final university campaign, Ilnicki, a seventh-round draft pick of the CFL’s Ottawa REDBLACKS last May (62nd overall), set a single-season Canada West record with 1,468 yards on the ground, good for fifth on the U SPORTS all-time list. In addition to leading the country by more than 300 rushing yards, he was tops in the nation in touchdown runs (11) and carries (196) as he helped the Bears reach the post-season for the first time since 2010. 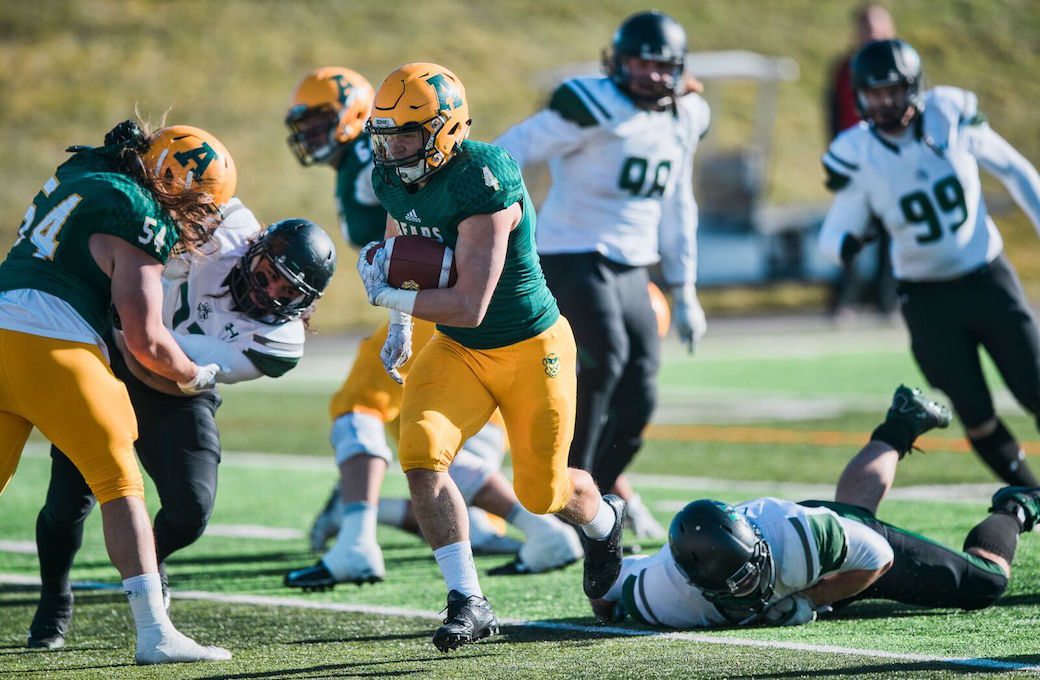 The 22-year-old concluded his five-year career as Alberta’s all-time rushing leader with 4,145 yards – the second most in Canada West history and fifth in U SPORTS annals.

In addition to being a leader on the field, the business student is a true example of what it means to be a student-athlete, as he was also the Canada West recipient of the Student-Athlete Community Service Award and the conference’s nominee for the Russ Jackson Award. The four-time Academic All-Canadian became the first University of Alberta student-athlete to study at the school’s Peter Lougheed Leadership College.

Ed embodies everything that is good about university athletics. He is a true scholar and has been a four-time Academic All-Canadian. He’s been a dominating and relentless competitor, who in 2017 ran for more yards than anyone in Canada West history. He is a young man of impeccable character who tirelessly serves his team and community. 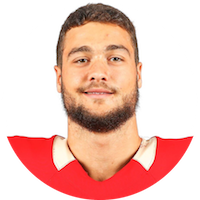 Auclair, who hails from Notre-Dame-des-Pins, Que., is only the second Laval player to merit the Presidents’ Trophy. Linebacker Frédéric Plesius, a five-year CFL veteran now with the Montreal Alouettes, was the first Rouge et Or to claim the honour in 2012.

Voted the RSEQ conference rookie of the year as a defensive back in 2016, the 6-foot-2, 196-pound sophomore was moved to hybrid linebacker this season and simply dominated at his new position, racking up a team-leading 41 tackles, including 32 solo, as part of the stingiest defensive unit in the country (9.6 points per game). For the second year in a row, the physical education and health student started in each of Laval’s eight league contests.

Despite his imposing stature, the product of the Champlain-Lennoxville Cougars remains fast and extremely efficient in coverage, as reflected by his three interceptions – good for second on the team - and two pass breakups.

I’ve had a good feeling about Adam since the start of the season because he is all over the field. He grabs interceptions, breaks up passes, excels at stopping the run, he does a lot of work from sideline to sideline. He is a smart player who has a very good football IQ. For me, he was a logical choice. 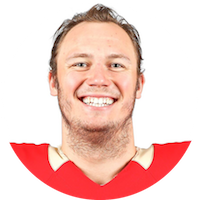 Betts captured his third national award in as many seasons with Laval, as he had also been named the Most Outstanding Down Lineman a year ago, after claiming top rookie honours in 2015. The Montreal native became only the second player in history to earn back-to-back J.P. Metras Trophies, joining another Rouge et Or standout, current Ottawa REDBLACKS defensive end Arnaud Gascon-Nadon, who won the trophy in both 2010 and 2011.

Despite being double-teamed more often than not this season, the 6-foot-3, 250-pound defensive end still managed to lead the RSEQ conference in quarterback sacks with 5.5 in eight league games, which was good enough for 10th in the nation. The physical education and health student tallied 12.5 total tackles – including eight solo and six for losses – while breaking up six passes and recovering a pair of fumbles.

In only three university campaigns, the product of CEGEP Vieux-Montréal has already tied the school record with 26.5 career sacks and is only five shy of the Quebec conference mark set over five seasons by Queen’s Jim Aru in the mid-1990s.

His statistics might not be as eye-popping as in past years, but it’s simply because our opponents’ game plans are very often built around him, to try and contain him. We saw all sorts of protection schemes to block him and, despite all that, he still led the conference in sacks. More importantly though, his domination creates more room for his teammates. He really is a special player. 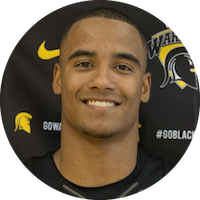 In his seven games this season, Ford collected 673 passing yards on a 66.7 per cent completion rate – throwing for over nine yards per attempt – while also picking up another 717 yards on the ground on 77 rushes, all culminating in 10 TDs on the campaign. Rounding out his eye-catching first season, Ford also saw a brief appearance as a kicker, punting once for 65 yards.

Ford’s Rookie of the Year nod is the second such award for his program, joining 2008 recipient Jordan Verdone, and his dynamic rookie campaign shows that the future is looking bright for the upstart Warriors squad. 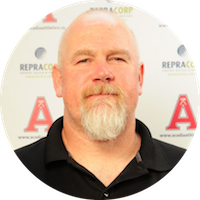 A five-time AUS coach of the year, Cummins had previously been honoured by his peers at the national level in 2011. John Huard, in 1981, is the only other Acadia winner of the Frank Tindall Trophy since it was first presented back in 1969.

In his 15th campaign at the helm of the Axemen, the former CFL defensive lineman led his troops to a 6-2 league record and a first-place finish in the AUS standings. Acadia topped the conference in a number of statistical categories on both sides of the ball, including total defence (375.5 yards per game), rushing defence (117.3) and rushing attack (208.3). 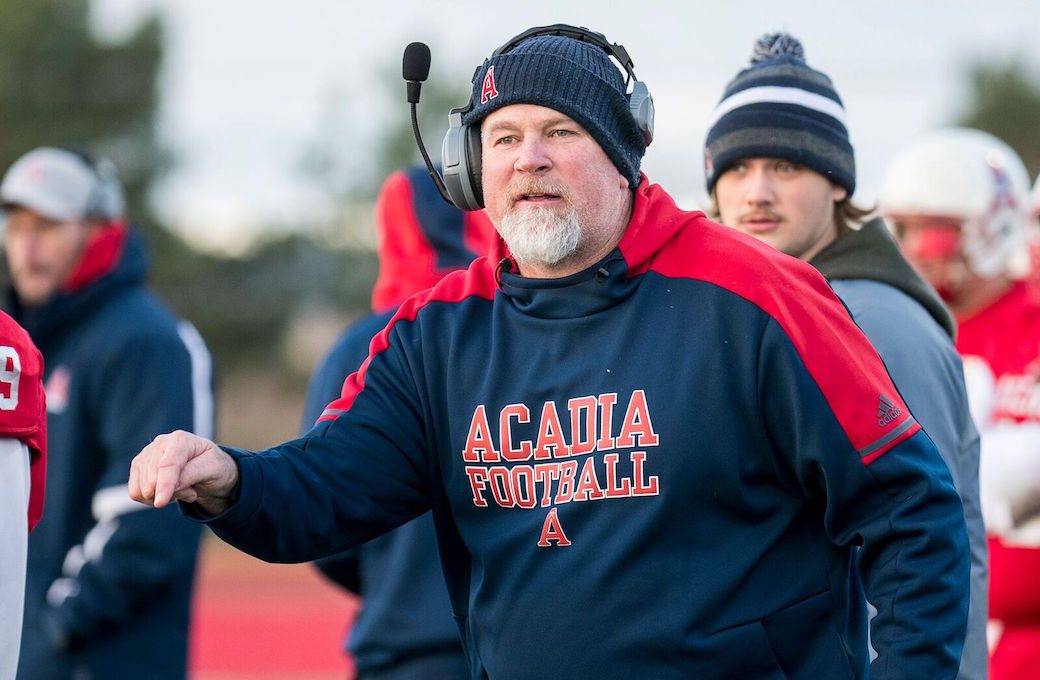 The Axemen would go on to capture the AUS banner, their fifth under Cummins.

I absolutely could not be happier for a coach, as the national award Jeff is receiving is so incredibly deserved. His leadership and ability to guide his program without flinching, through some adversity through the season, is something I've admired and been so proud of. Jeff is a leader in our Athletic Department, and has become a good friend. So many discussions with him prior to and during the season, remind me how much he’s put into making this season so successful as our head coach. I’m so happy for Jeff and his family. 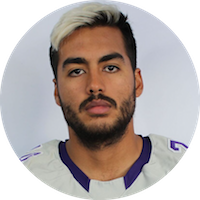 Vanin not only became the first Western student-athlete to win the Russ Jackson Award, he was also the school’s first-ever nominee for the prestigious trophy, which was first presented in 1986.

The fifth-year linebacker from London, Ont., was once again brilliant on the field this season, earning first-team OUA all-star honours for the second straight year thanks in large part to his 34 tackles in eight league games, good for second on the team.

Having already graduated from Western’s physiology program with a 91.3% average, Vanin is currently in his first year of Medical School. Putting his intelligence and passion into action, he is also a researcher at the Victoria Research Laboratories, Centre for Critical Illness Research. 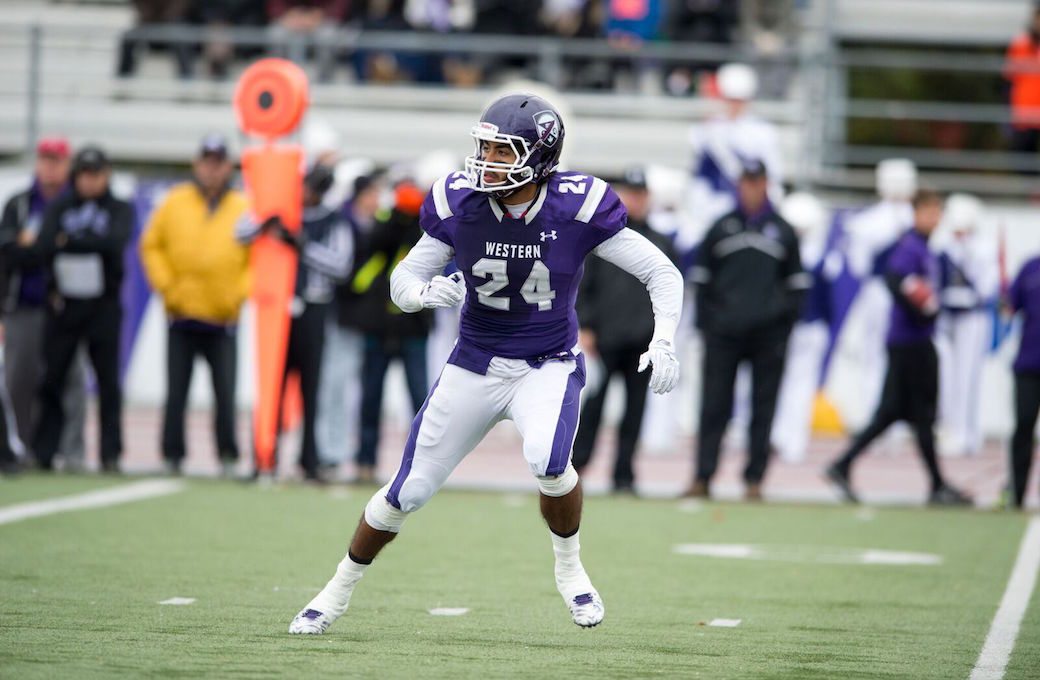 His community involvement doesn’t stop there, however, as Vanin has also taken part in numerous football and sport-related activities, including the London Jr. Mustangs Football Club, Western Football Mentorship Program (which he created) and BMO Sports Day, to name a few. He has also been involved with the Women’s Community House and Sexual Assault Centre, Ronald McDonald House, and Andrew’s Legacy Fundraiser.

Nick is a fantastic example of exactly who we want our student-athletes to be. Not only is he a standout player on the field, but he also excels in the classroom, managing the demands of both football and medical school and succeeding in both. Nick is also heavily involved in the community, helping with coaching youth teams, while also volunteering with a number of groups around London. 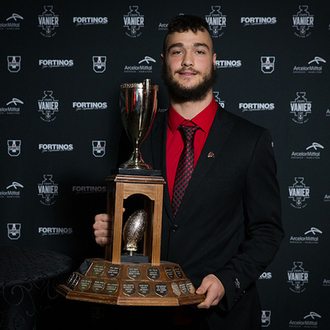 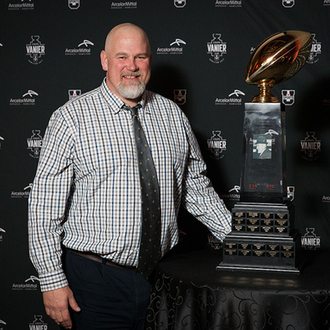 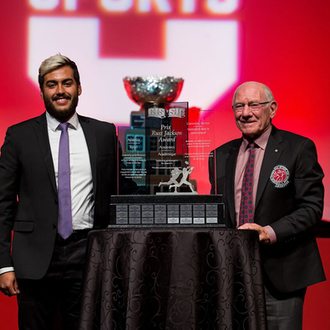 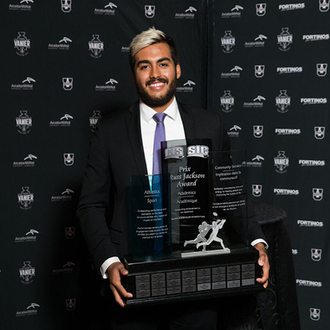 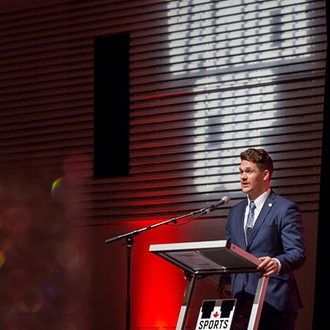 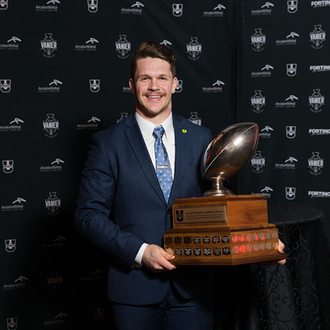