Legendary U SPORTS coaches Dave Smart of Carleton and Patrick Nearing of Dalhousie, veteran New Brunswick reporter Bruce Hallihan and Paralympian swimmer Elisabeth Walker-Young of Brock were honoured Tuesday as the winners of the 2020 U SPORTS Honours Awards for their contributions to university sports in Canada.

All winners receive a commemorative ring from Baron, the Exclusive Provider of championship rings and recognition jewelry for U SPORTS.

The announcement follows Thursday night’s reveal of Aboubacar Sissoko and Kelsey Wog as the winners of the 2020 Lieutenant Governor Athletic Awards Presented by Makadiff SPORTS as the U SPORTS Athletes of the Year. 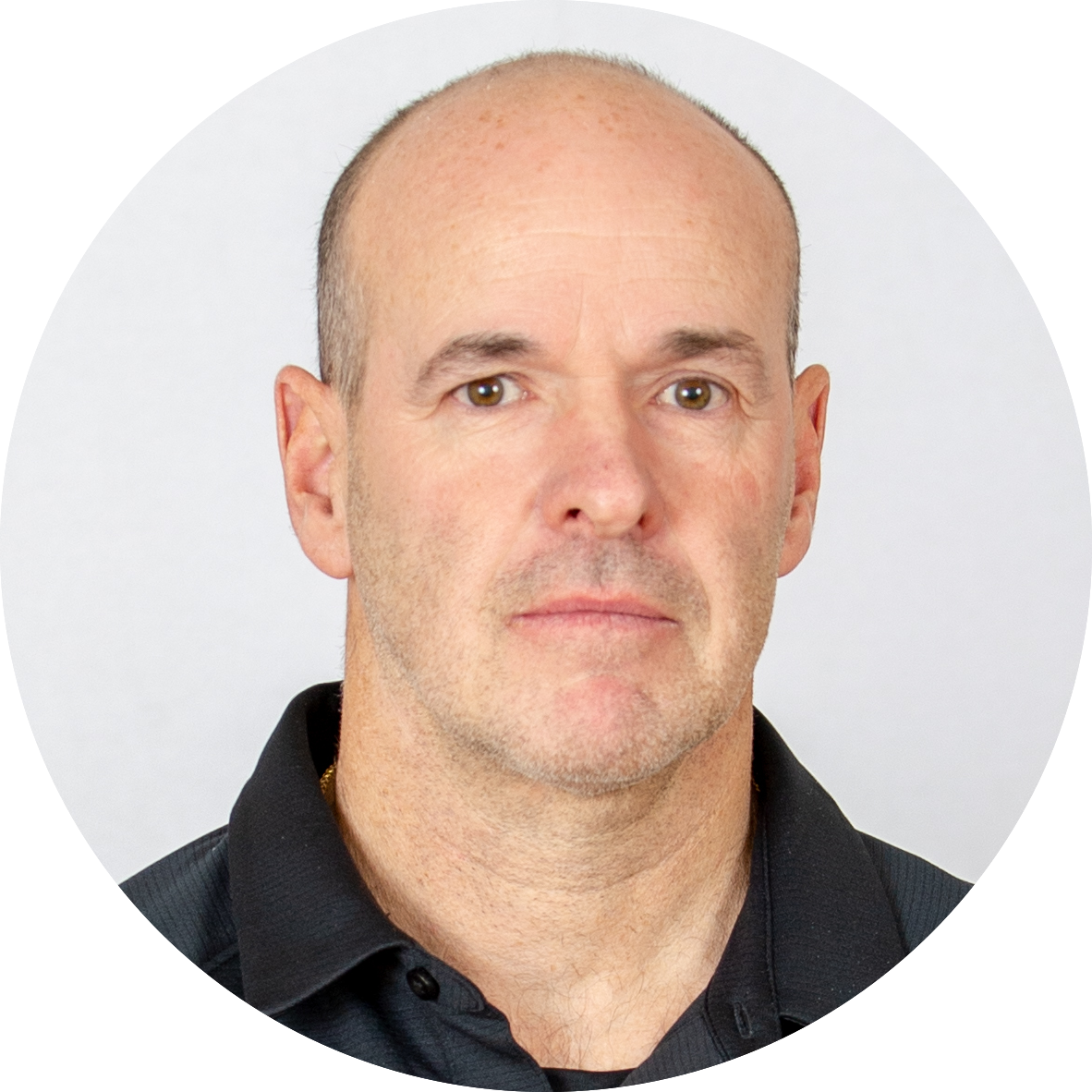 After taking over as head coach of the Carleton men’s basketball team in 1999-00, Dave Smart turned the Ravens program into one of the most successful dynasties in U SPORTS history. 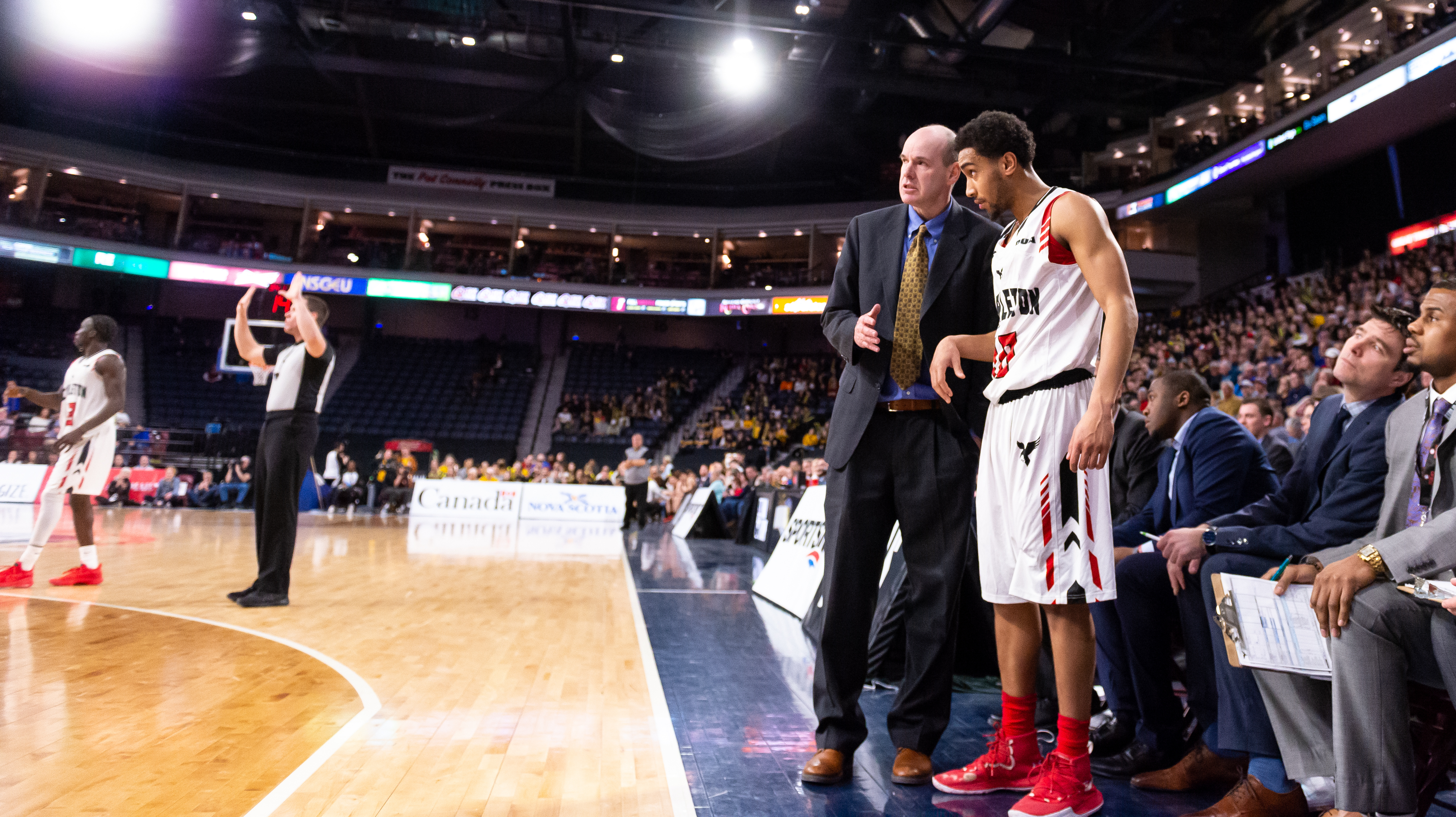 He led his team to 11 OUA championships – the most by any coach in conference history – and 13 U SPORTS Final 8 national championship titles in 17 years.

His incredible success at the Canadian university level has also provided him with several opportunities to work with Team Canada. Since 2012, Smart has served as an assistant coach of the Canadian Senior Men’s National team, where he has been behind the bench for the FIBA Americas Championship and the FIBA Olympic Qualifying Tournament, among other events. He also served as head coach of the U18 national squad, leading the team to a silver medal in 2018 on home court. 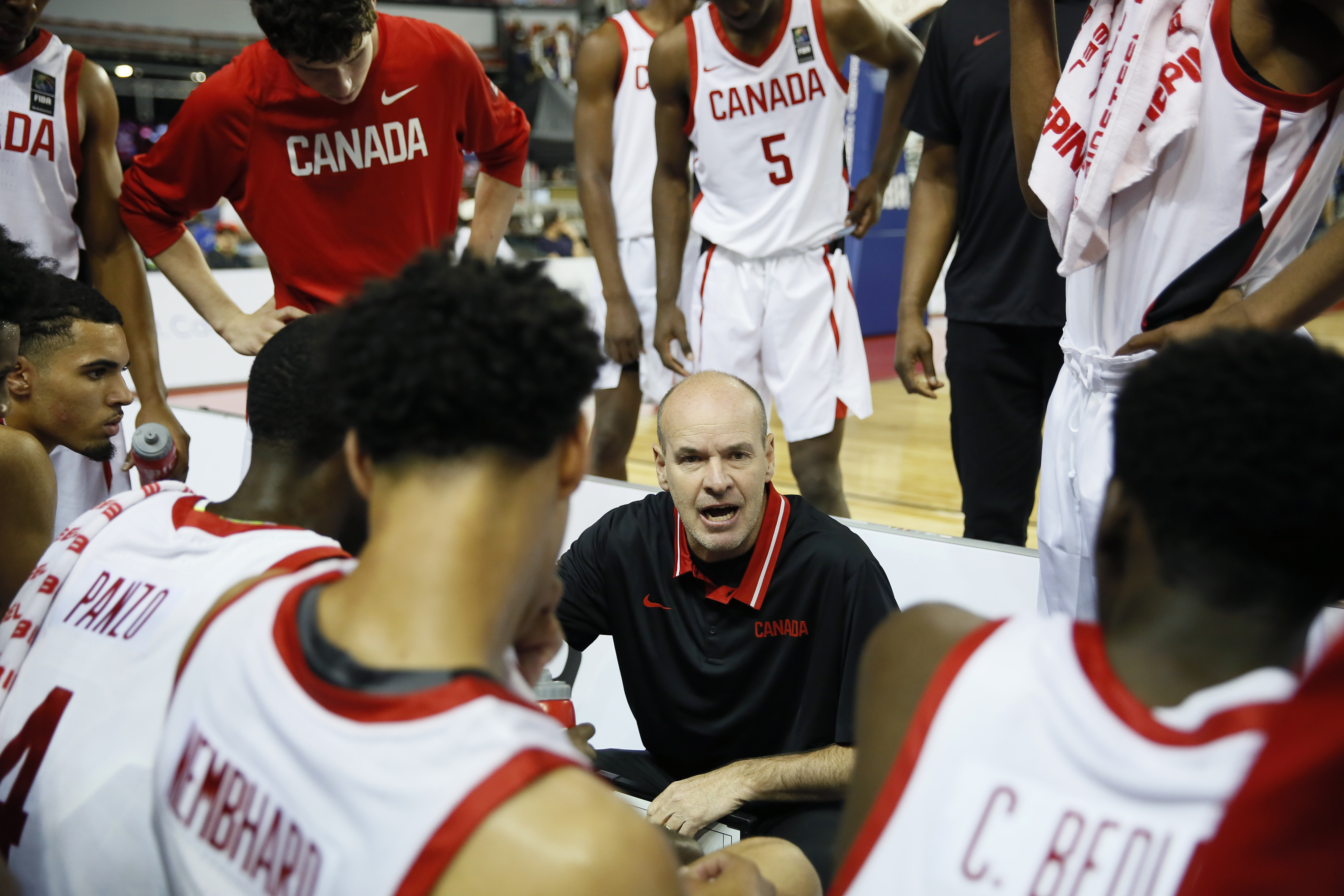 For the 2019-20 season, Smart moved from the sidelines to the newly-created position of Director of Basketball Operations of both the Ravens’ men’s and women’s basketball programs. He will continue his management career in 2020 as the first-ever general manager of the expansion Ottawa BlackJacks in the Canadian Elite Basketball League (CEBL).

"Dave Smart has had a remarkable career coaching the Carleton Ravens men's basketball program, this award is a great honour and Dave is a much-deserved recipient,” said Jennifer Brenning, Carleton Assistant Vice President of Athletics and Recreation. “Over his Carleton coaching career, he has developed incredible people both athletically, as many have gone on to play professional basketball,  and as leaders in the community.  Congratulations to Dave for being recognized with this remarkable award. " 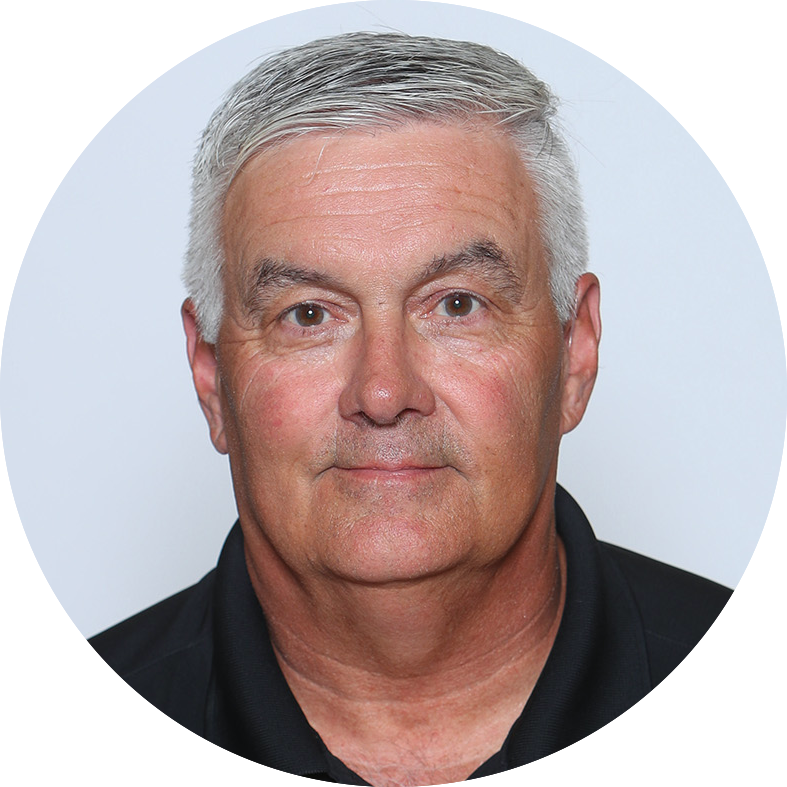 Patrick Nearing took over as head coach of the Dalhousie Tigers men’s soccer program to start the 1999 season – one that ended with an AUS title – and held the post until the completion of the 2019 campaign.

During his 21-year tenure, he has accumulated a .631 winning percentage in regular season play, finishing his career with a record of 128-75-59. The AUS and U SPORTS Men’s Soccer Fox 40 Coach of the Year in 2008, Nearing led the Tigers to an AUS championship and a sixth-place finish at the national championship that season. Nearing is also the reigning AUS men’s soccer Coach of the Year. 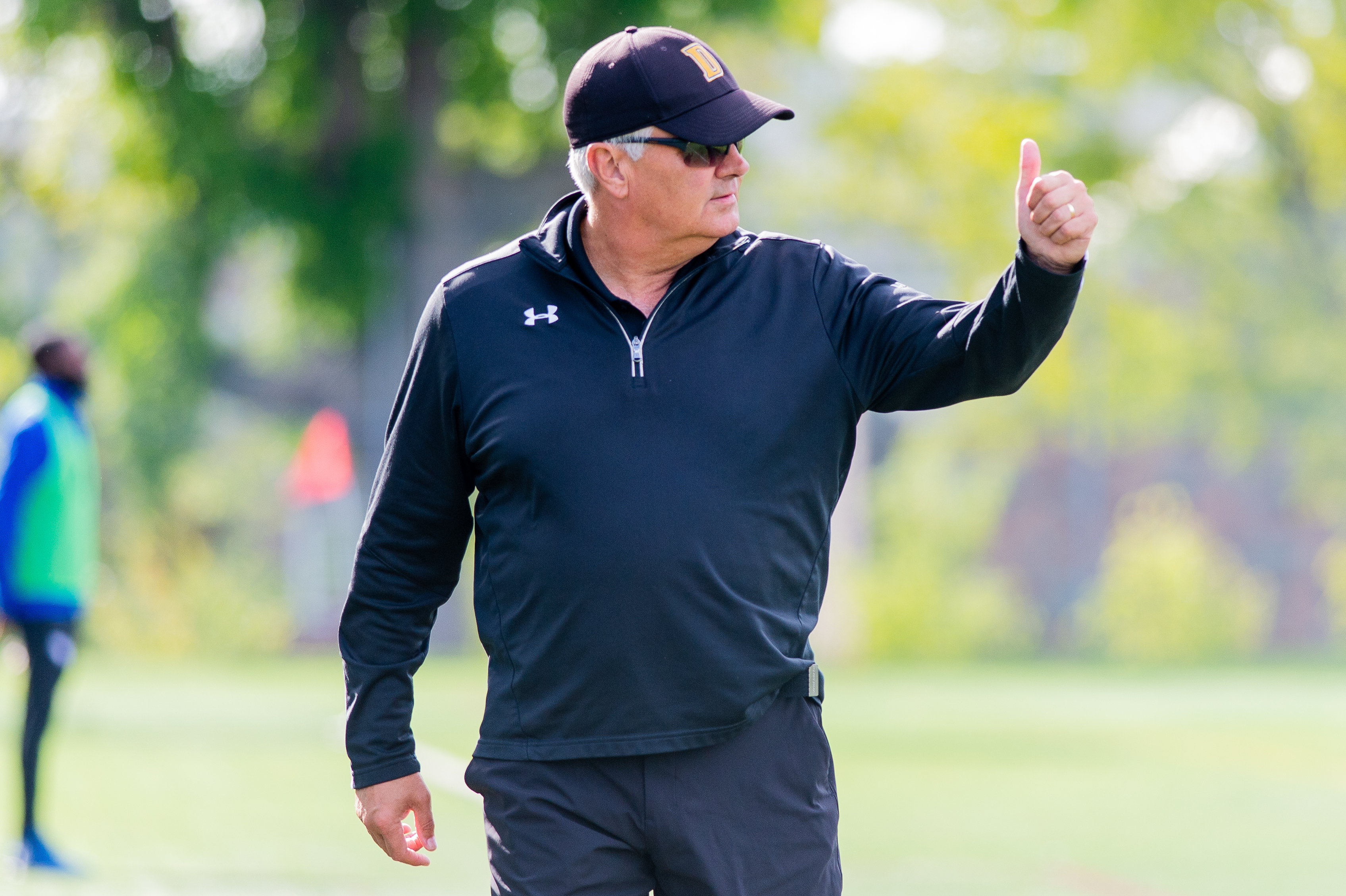 Off the pitch, Nearing has also served on several U SPORTS committees during his career, including compliance, eligibility, and athletic financial awards, while holding the roles of Chair of the men’s soccer sport technical subcommittee and as President of the men’s soccer coaches’ association.

Before assuming the reigns of the Dalhousie men’s soccer team, he was the Technical University of Nova Scotia’s (TUNS) men’s soccer coach for 17 seasons, leading them to nine Atlantic Collegiate Athletic Association (ACAA) championship titles. He also chaired the league from 1992-2000 while serving as TUNS’s athletic director. When TUNS amalgamated with Dalhousie University, he continued his tenure as director of the newly named Sexton Campus’s athletic program, eventually becoming Dalhousie’s assistant director of athletics and recreation. 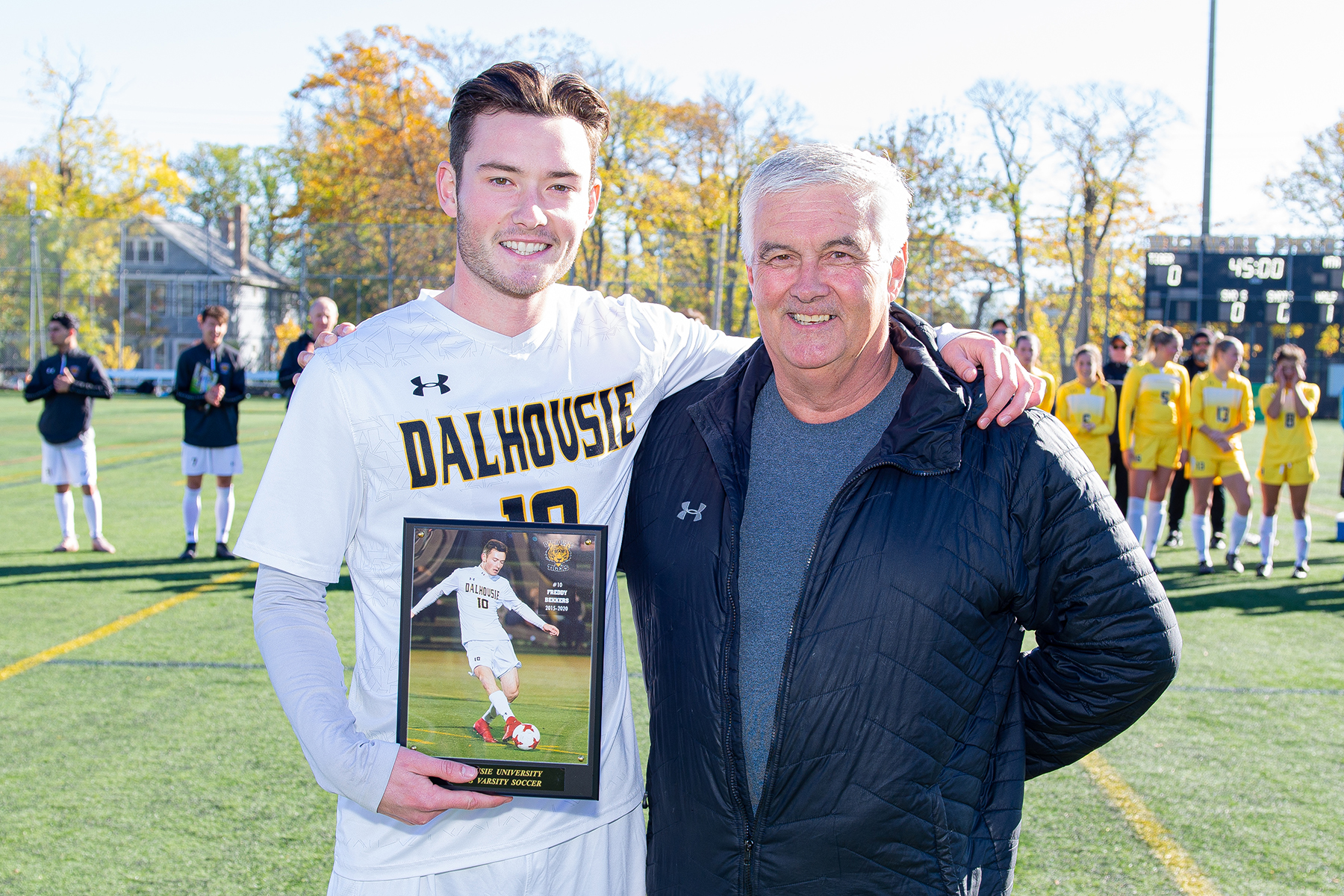 A Dalhousie University grad (BPE ‘79), he also spent 30 years as a club soccer coach in Bedford, N.S., coaching at the grassroots level all the way up to U18. He was also the head coach of the Dartmouth United senior men’s team for 15 seasons, leading them to a number of Nova Scotia provincial and Atlantic championship wins.

“Pat has been an instrumental part of the success of our student-athletes and programs at Dalhousie,” said Dalhousie Executive Director of Athletics and Recreation Tim Maloney. “He’s had an outstanding impact on the future of university sport serving for many years on several national committees. I  can’t think of anyone more deserving of this recognition.” 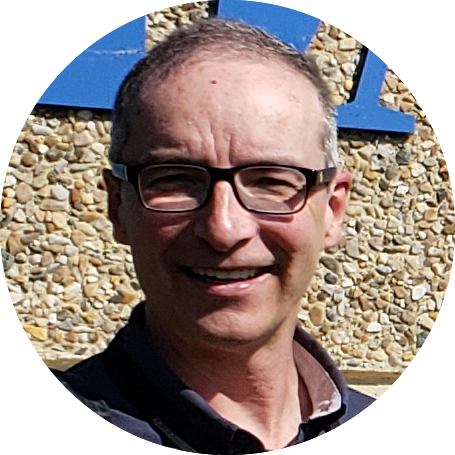 Bruce Hallihan has been a sports reporter for over 30 years in his home province of New Brunswick, and has dedicated a great deal of his career to covering university sport in Atlantic Canada.

He began covering university sports in the fall of 1988, when he joined Fredericton’s Daily Gleaner newspaper. Hallihan works painstakingly to provide accurate and fair coverage of the UNB Reds, St. Thomas Tommies, and their opponents. He’s well respected in all corners of the conference for his unbiased and comprehensive reporting. 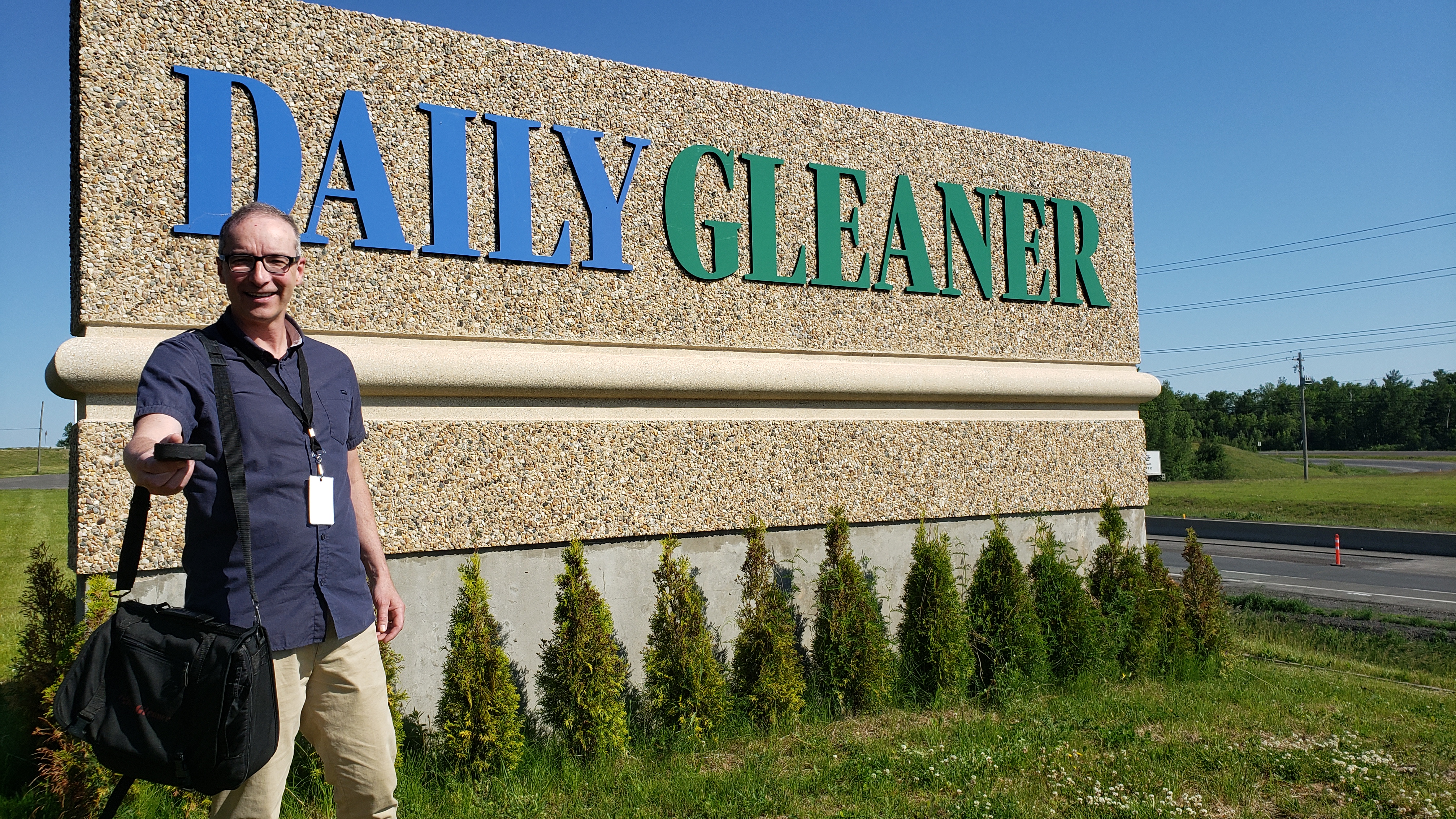 Hallihan is best known for his annual Atlantic University Sport men’s hockey conference preview. He devotes countless hours in preparing this highly-anticipated piece, which has become a must-read for fans, players, coaches, Athletic Directors and other media, during its 29-year run. Some in Atlantic Canada, fans and coaches alike, refer to it as the conference bible.

A former voting member of the U SPORTS men’s hockey Top 10 media panel for 15 years, Hallihan is universally respected by coaches and student-athletes. Hallihan often goes beyond what the spectators might see on the field of play, writing human interest stories that offer personal insight into the training and trials of student-athletes on the Fredericton campuses and beyond.

“Bruce has been a man who’s set the standard for university sports coverage in Atlantic Canada for more than 30 years. While his men’s hockey preview is his signature piece, he brings that standard to everything he covers. Coaches and athletes trust him with their stories, and he never lets them down,” said Bill Hunt, Sports Reporter at the Daily Gleaner.  He’s a good reporter, a good editor and an even better man.” 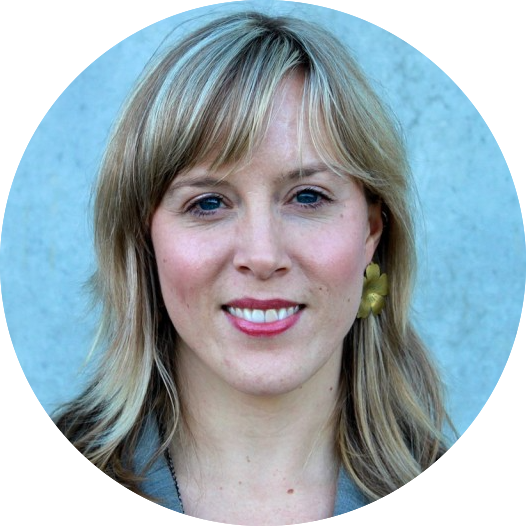 Born without arms below her elbows, Elisabeth Walker-Young was a ground-breaking OUA athlete with the Brock Badgers from 1996-2001, helping to pave the way for the inclusion of Para swimmers. She was also a member of the national team from 1992-2005, serving as captain from 1996 on, competing in four Paralympic Games (1992, 1996, 2000, 2004), winning six medals (three gold, one silver, two bronze). 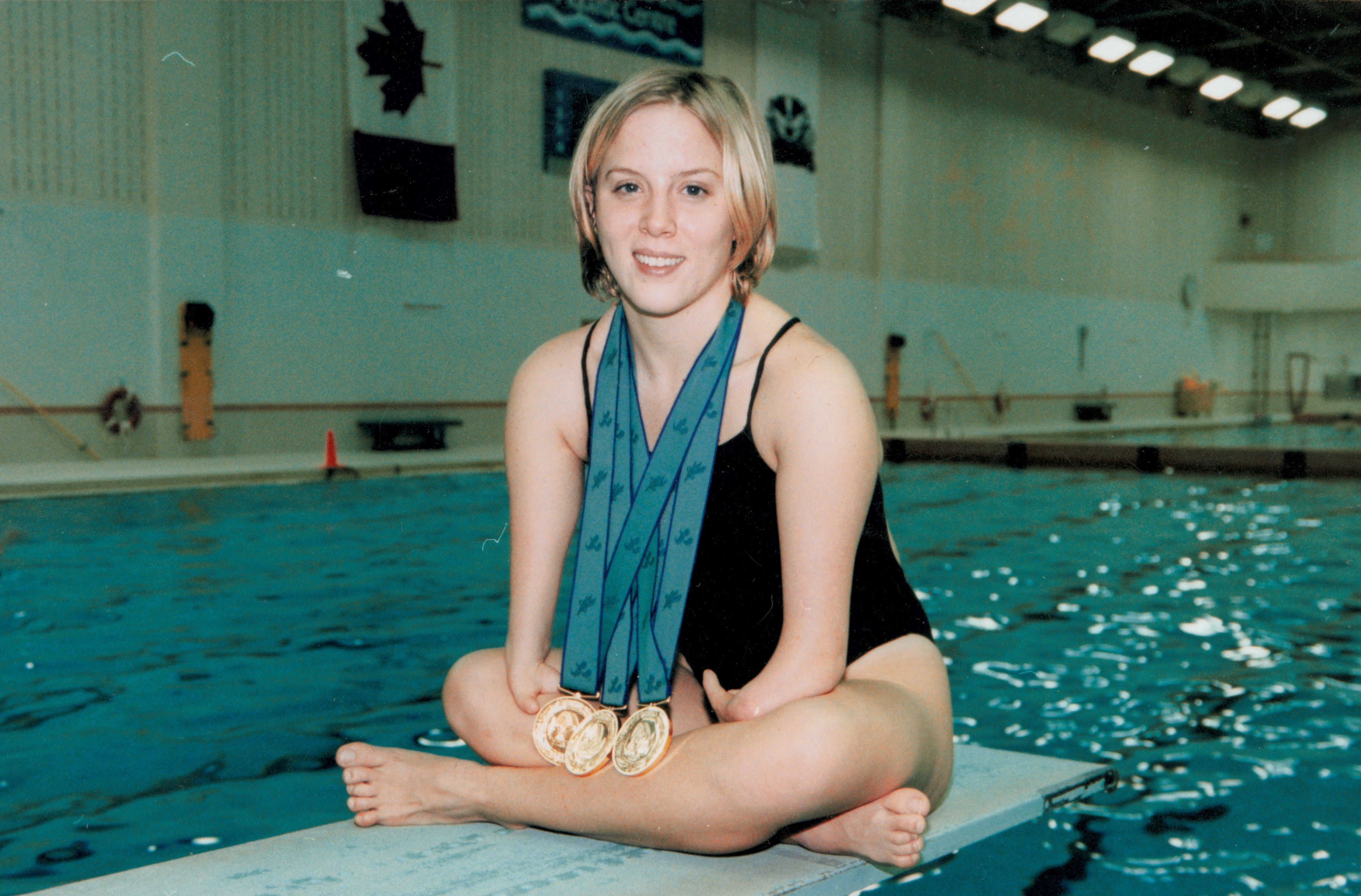 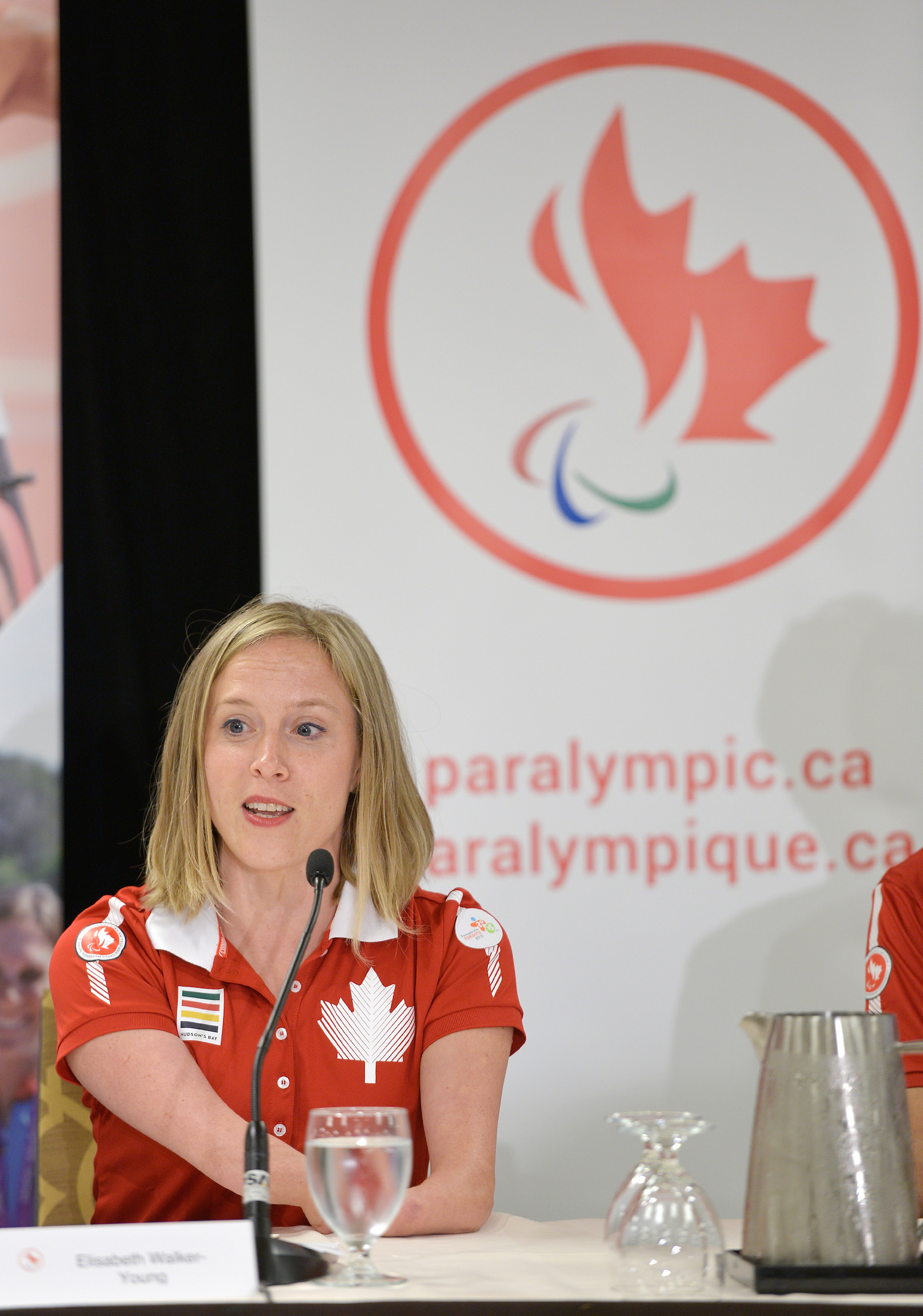 She also received several high-profile awards and recognitions including induction into the Swim Ontario Hall of Fame (2008), Queen Elizabeth II’s Diamond Jubilee medal for her contributions to the Paralympic Movement as an athlete and builder (2012), induction into the Canadian Disability Hall of Fame (2014), and was made an Officer of the Order of Canada, honouring her contribution to the betterment of inclusion and accessibility for Canadians (2018). Today, she is the Manager of Programs for the Canucks Autism Network.

While exciting visiting school children with details of her Paralympic experiences, Walker-Young’s classic line is “The only thing I cannot do is count to 10 on my fingers.” 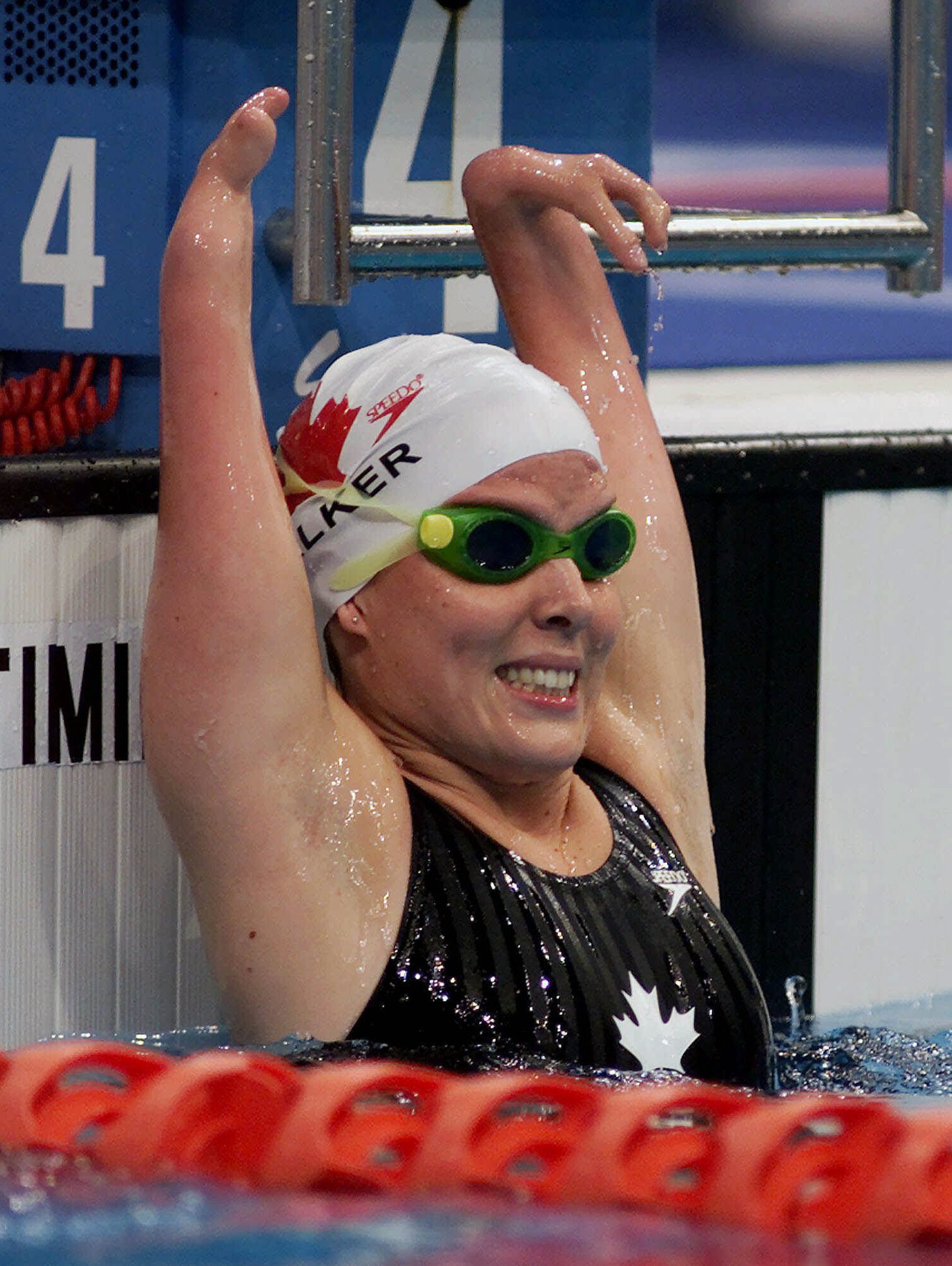 “A heartfelt congratulations to Elisabeth for this well-deserved honour,” said Canadian Paralympic Committee CEO Karen O’Neill. “Elisabeth has been a valued member of the Paralympic Movement for many years and has been a strong leader and powerful advocate for inclusive sport. She is an outstanding person who lives her values every day, and it’s wonderful to see her being recognized.”

“Elisabeth is exceptionally deserving of this award.  She has not only succeeded at the highest level as an athlete, but has used that success to springboard into other meaningful and important avenues, most notably inclusion and accessibility in sport,” said Brock Associate Director of Athletics Emily Allan. “Her experience as an athlete has certainly helped to carve out all the traits that make her so successful – hard work, focus, determination, resiliency, belief in herself and others – all these traits have enabled her to work hard and succeed in advocating so tirelessly for others.  She really is a remarkable individual, and we are always so proud of her accomplishments.”