The winners were announced in person at the U SPORTS Annual Awards Reception for the first time since 2019. 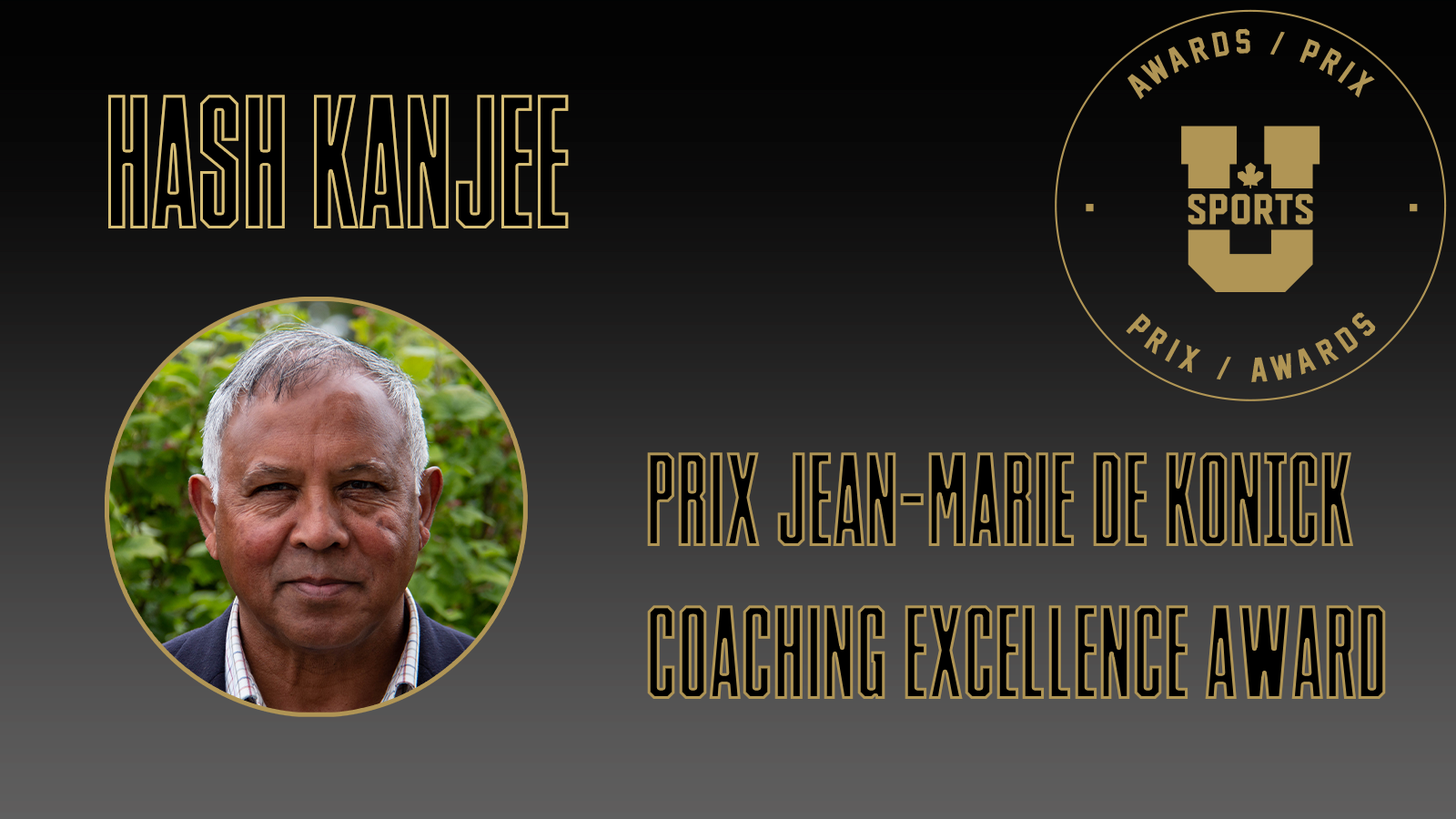 Hash Kanjee’s record in 21 seasons is 243 wins, 38 losses and 32 ties as head coach of UBC women’s field hockey.  Kanjee led the Thunderbirds to the U SPORTS championship 10 times.  He has won the Canada West conference title 15 times. In 2013, his UBC squad became the first U SPORTS program to win three national titles in a row.

At the university level, Kanjee has coached more than three-dozen players who have gone on to represent their country at the senior level.  He became the head coach of Canada’s national men’s team in 1989 and was named the country’s junior national women’s team in 2003, eventually leading Canada to the BDO Junior World Cup in Chile two years later.

As a player, he did a six-year stretch with the Men's National Team from 1976-82, where he competed in the World Cup, the Pan-Am Games and an Olympic qualifier. 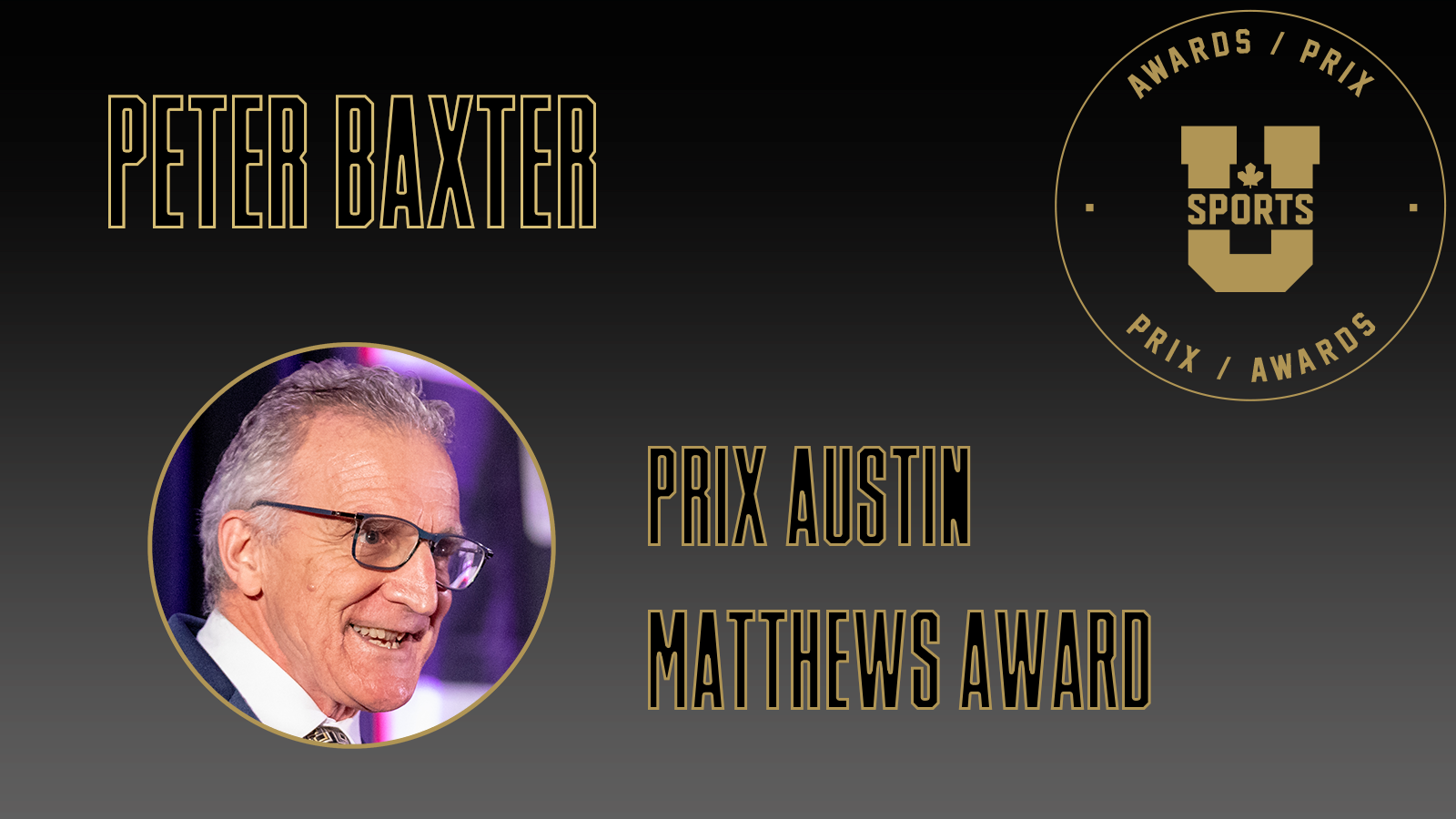 Baxter served as Laurier’s director of Athletics and Recreation for more than 23 years. Throughout his tenure he has been integral to the growth of many facets of Laurier’s athletics program. He has contributed to the further development of interuniversity sport offerings, particularly Golden Hawk women’s teams; the diversification of recreation, club, and intramural offerings; entrepreneurial revenue growth; and the expansion, renovation and construction of new athletic facilities, including Alumni Field, the Athletic Complex Fitness Centre and the Laurier Brantford YMCA. During his time as director, 45 (of 75 total) Ontario University Athletics (OUA) championships and 10 (of 14 total) national U Sports championships have been won by Golden Hawk teams.

“Peter’s leadership over the last two decades at Laurier and across the OUA have helped create exceptional student experiences for all Golden Hawks,” said Ivan Joseph, vice president: student affairs. “He cares deeply about the university and improved the athletic and recreation experience across both our campuses. His focus was not just on the high-performance athlete but in championing opportunities for all to participate.”

Baxter joined Laurier in May 1998 when Laurier had just 5,800 students on one campus. The Athletics portfolio has grown to overseeing multiple campuses that amass a student population exceeding 20,000. To accommodate for the changes in growth, Baxter implemented a student leadership model, which annually provides over 300 experiential learning opportunities for Laurier students passionate about recreation, intramural and interuniversity programs, facilities, marketing, communications, sports medicine and event operations.

Baxter has influenced every facet of the Athletics and Recreation program with an innovative approach and winning tradition during his career. This includes partnering and working closely with the Students’ Union and the Graduate Students’ Association to invest in capital facility projects and program enhancements to enhance the Athletics and Recreation programs and services; creating and implementing the Golden Hawk brand logo; Laurier Hawk Talk, the first one-hour weekly radio news program in Canada dedicated to a university Athletics program; and being the first in Canada to show video highlights of Golden Hawk games on the web and the first university athletic department in Canada to stream games live on the internet with the creation of “Laurier Hawk TV.” Baxter also initiated peer education and community partner educational workshops to affect social change, addressing systemic racism, doping and drug abuse, homophobia, masculinity issues and sexual violence, and beginning discussions to support reconciliation.

In addition to his work at Laurier, Baxter was president of Ontario University Athletics (OUA) and vice-president of Canadian Interuniversity Sport (now U Sports). He also served for 16 years as the OUA football convenor and served as chair of the Football Rules Committee for Football Canada. In 2010, Swim Ontario honoured Baxter with the Omni Friend of Swimming Award for enriching the sport of high-performance swimming. He was selected to serve as Chef de Mission for Team Canada at two World University Games: 2009 Harbin, China (winter) and 2011 in Shenzhen, China (summer). 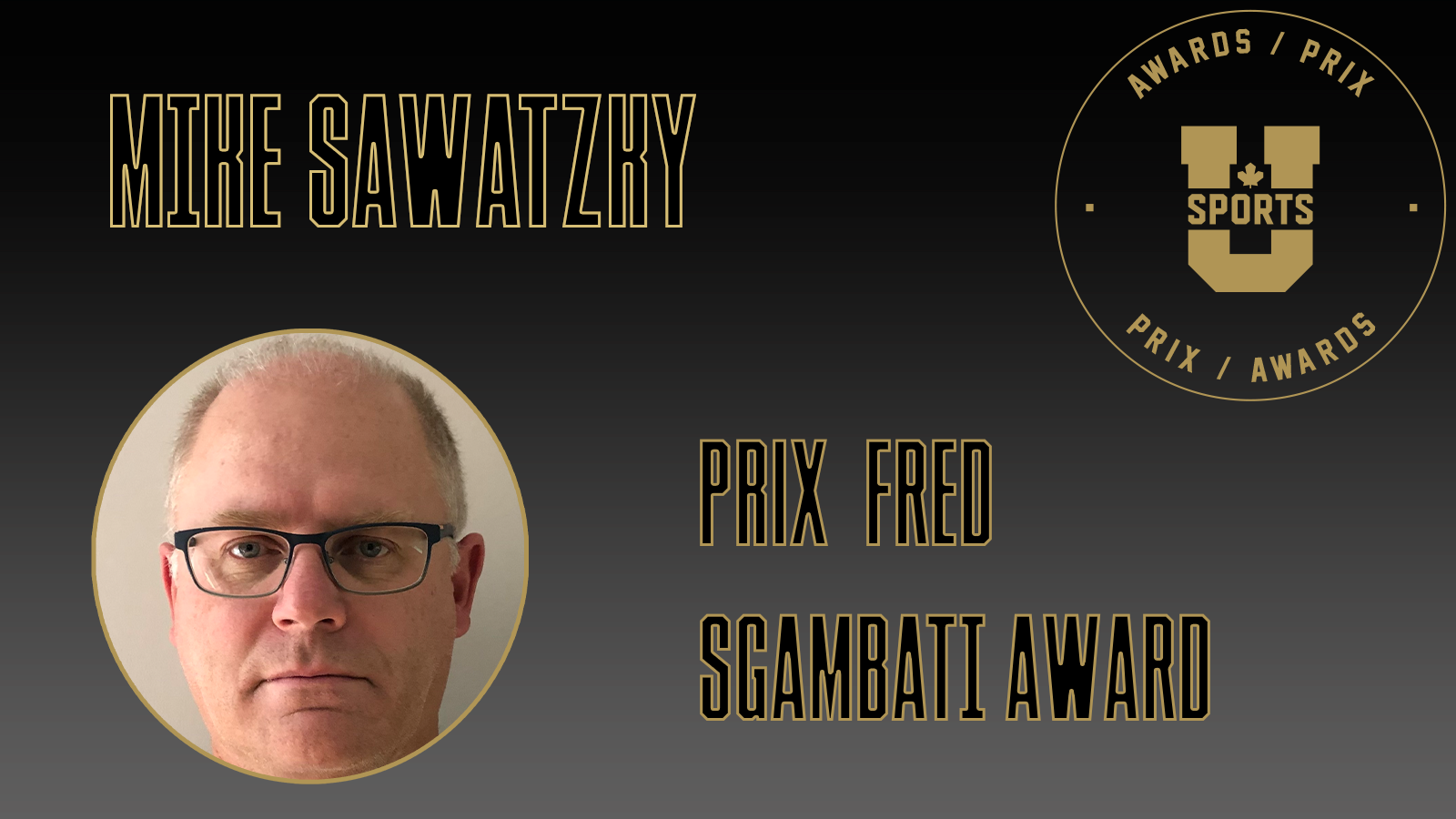 Mike Sawatzky has been committed to covering amateur sport in Winnipeg and the province of Manitoba in a city that generally flocks to its professional teams first.

A veteran reporter of more than 30 years, Mike has told the stories of Wesmen and Bisons athletes with a care, keen interest and conscientiousness that isn’t always there for amateur sports subjects in major cities. He is always ready and willing to pitch university stories and has made U SPORTS athletes a priority.

In 2021-22, Free Press reporters were tasked by their editor to find one team in the city to follow throughout the season and cover their stories. In the summer of 2021, Mike chose Wesmen Women’s Basketball as the team he would commit to, and for the next 10 months chronicled the journey from hopeful group to national silver medalists. In that time, he also went in-depth on individual stories, including that of guard Anna Kernaghan, whose father was serving as a coach on Anna’s provincial team when he passed away on a team trip in Regina in 2017. Mike’s touching and thoughtful approach to the story told of Anna’s grief and her drive to succeed in her father’s memory.

In the past month, Sawatzky has also featured unique angles for Bisons athletes, including Maya Turner, the kicker who committed to the University of Manitoba football team to become just the second female in program history to sign a letter of intent. Sawatzky was the only media member to cover her historic commitment.

Throughout this season, he accumulated more than 50 bylines of university sport coverage and was nominated not only for his continued dedication to telling university sports stories, but for his unquestioned enthusiasm to do so. He covers these stories not because he’s told or assigned to, but because he seeks them out and wants readers to know them.

Sawatzky began reporting at the Brandon Sun in 1985 and covered the Brandon Wheat Kings from 1988-1999. He joined the Winnipeg Free Press sports desk in 2003 and became WFP night sports editor in 2012.  Sawatzky moved back to reporting at WFP in 2016 covering university, amateur sports, as well as the Winnipeg Jets and the CFL’s Winnipeg Blue Bombers. 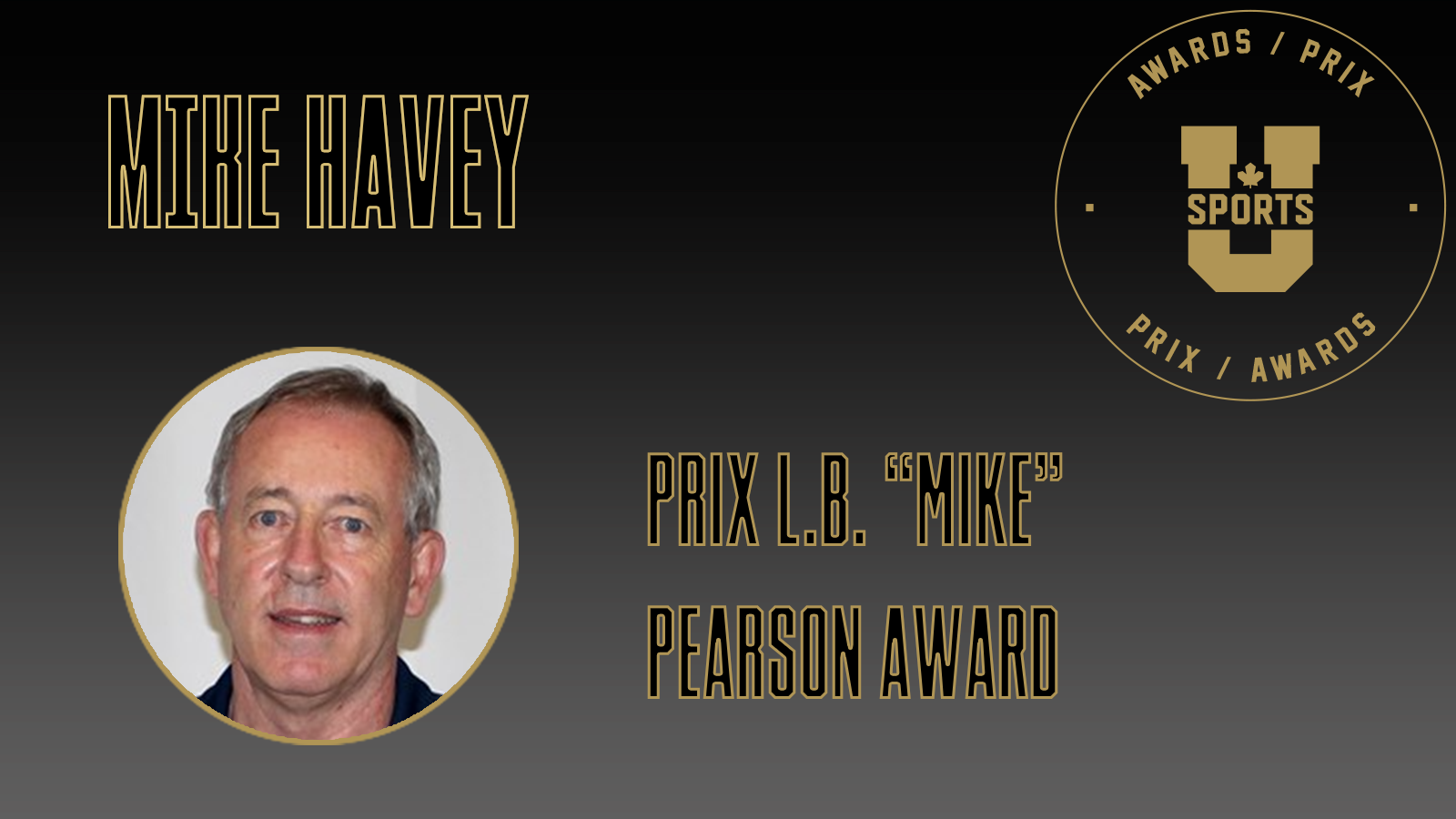 Mike Havey was named Director of Athletics and Recreational Services at the University of Windsor in 2013, following nine years as Associate Director.

Havey is recognized as a leader in inter-university sport across Canada with over 35 years of professional and volunteer experience in administration, coaching, event management, and program development at regional, national, and international levels.

He has been a member of capital construction management committees that have brought multiple enhancements to the University of Windsor, including the Lancer Sport and Recreation Centre (LSRC) currently under construction.

An NCCP Level IV certified basketball coach, Havey was the head coach of the Lancer men’s basketball program from 1991-2004 before advancing his career in sport administration. A native of Arnprior, ON Havey earned his Baccalaureate and Masters in Physical Education from the University of Ottawa.