We apologize for the technical issues encountered on the first day of competition for Track & Field and Women's Basketball. The issues were resolved by end of day on Thursday. U SPORTS and the respective hosts have worked together to ensure there will be no future issue for the remainder of the competitions.

We apologize for the inconvenience.

The No. 6-seeded Saskatchewan Huskies overcame a 15-point deficit enroute to a 72-67 upset over the No. 3 seeded and Atlantic University Sport champion Acadia Axewomen Thursday in quarter-final action in the U SPORTS Women’s Basketball Final 8 at the Centre for Kinesiology, Health and Sport.

Down from the final four minutes of the first quarter, Saskatchewan outscored Acadia in the second quarter by six points, in the third by one and in the fourth by six for the quarter-final victory.

“That had all the makings of a great game,” said Huskies head coach Lisa Thomaidis. “We were down big early and made a comeback and it was tight for most of the second half. I'm just so proud of this team to come out and win like we did.”

The Huskies will now face their provincial rivals, the Regina Cougars in an all-Saskatchewan semifinal Saturday. Acadia will meet the Laval Rouge et Or in a consolation semifinal Friday.

Second-year forward and junior national team player Summer Masikewich led the Huskies to the comeback, recording a double-double in the game with 14 rebounds and 25 points, 18 of which were in the second half. Sabine Dutake added another 17 points and nine rebounds, while Kyla Shand also registered a double-double off the bench with 11 points and 13 rebounds.

2018 Nan Copp winner Paloma Anderson led the Axewomen in the game with 25 points and six rebounds. Haley McDonald registered another 12 for Acadia. 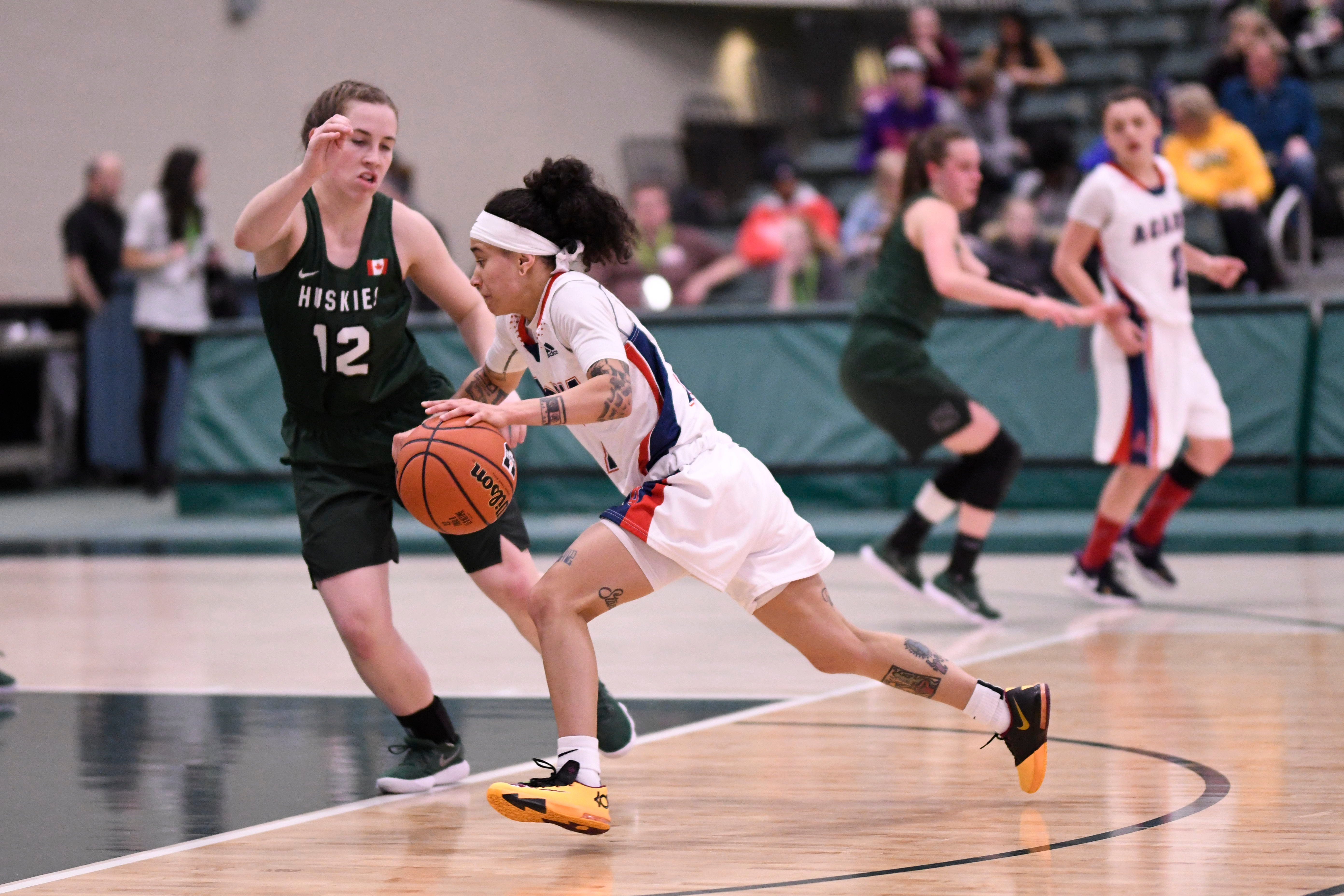 After Saskatchewan took a four-point lead, Acadia found a stride going on a 12-3 run to lead with under four left in the first quarter. The Axewomen extended their lead to nine after the first.

Acadia continued their momentum into the second, extending their lead to 15 at one point in the quarter. But the Huskies bounced back near the end of the quarter to make it a three-point game heading into the half at 39-36, inspired in large part by three triples from Sabine Dukate. Megan Lindquist and Libby Epoch also hit back-to-back threes in the run.

Acadia and Saskatchewan kept the game tight throughout the first minutes of the third quarter with Acadia’s lead growing no larger than four. Each time Acadia looked to extend to a larger lead Saskatchewan would tie the game. Anderson hit a quick shot from under the hoop to close the frame ahead 51-49.

The Huskies scored first to open the final quarter with a bucket to tie the contest and took their first lead since the first minutes of the game at 53-52. Masikewich extended the lead to 55 and Saskatchewan never looked back. The Huskies had as much as an eight-point lead in the final quarter.

“Summer and Kyla were just such a big presence and they had such a hard time matching up with that,” she added. “Our perimeter players did a good job of finding them.”

Tipoff on the all-Saskatchewan semifinal is at 7 p.m. ET / 4 p.m. PT Saturday, while the consolation semifinal for Acadia and Laval is 8 p.m. ET / 5 p.m. PT Friday.

Quarter-final 3: Cougars use big second-half run to pull away from Laval