It was a tense, one-possession game for the final three minutes, but the Calgary Dinos were able to hang on for a 71-68 win over Laval to win the consolation final at the 2018 U SPORTS Women’s Basketball Final 8 Championship on Saturday at the Centre for Kinesiology, Health & Sport.

Laval had one last chance to tie it at the buzzer off an inbound pass with 1.7 seconds left, but Jane Gagné wasn’t able to get a good look and her three-pointer was off to lock up the win for the Dinos.

“It’s interesting when you have a game the night before and then have to play at 11 a.m. the next day,” Calgary head coach Damian Jennings said. “We’re used to it in training, but we’re not used to it in a game situation and we just tried to keep it business as usual. Once you lose that first game, your ambition is to finish fifth and we put ourselves in a situation where we could do that.”

Michaela Nieuwenhuizen had an exceptional game for Calgary, breaking into the Dinos’ starting lineup for the first time all season and responding with a game-high 23 points while shooting a deadly 10-for-13 from the floor. Liene Stalidzane added 12 points and a game-high 10 rebounds for a double-double, while Erin McIntosh hit a pair of triples and finished with 13 points. 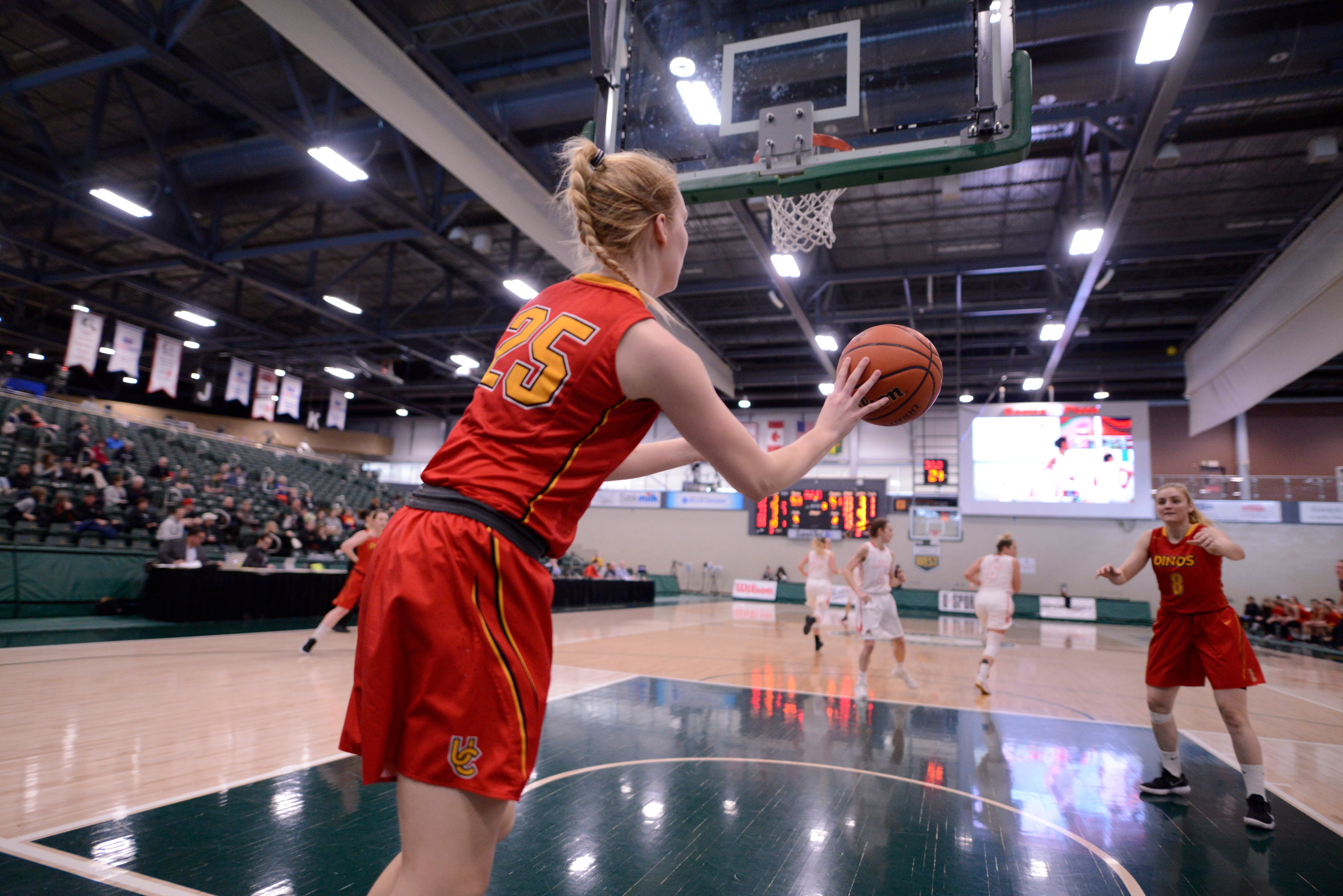 “Michaela’s a great person that’s been very resilient and patient all season when others have, perhaps, outperformed at different moments,” Jennings said. “With (guard) Shannon (Hatch) sick all weekend, we felt it was wiser to start with Michaela and she became the difference maker today.”

Raphaëlle Côté had 16 points and eight rebounds to lead Laval in both categories, while Claudia Émond scored 15 points and Gagné added 10. Côté and Geneviève Derome, both fifth-year players, played in their final game for Laval.

The entire game was a closely played affair, as neither team led by more than six points at any point. There were 15 lead changes throughout, the last of which came when McIntosh drilled a three-pointer early in the fourth quarter. 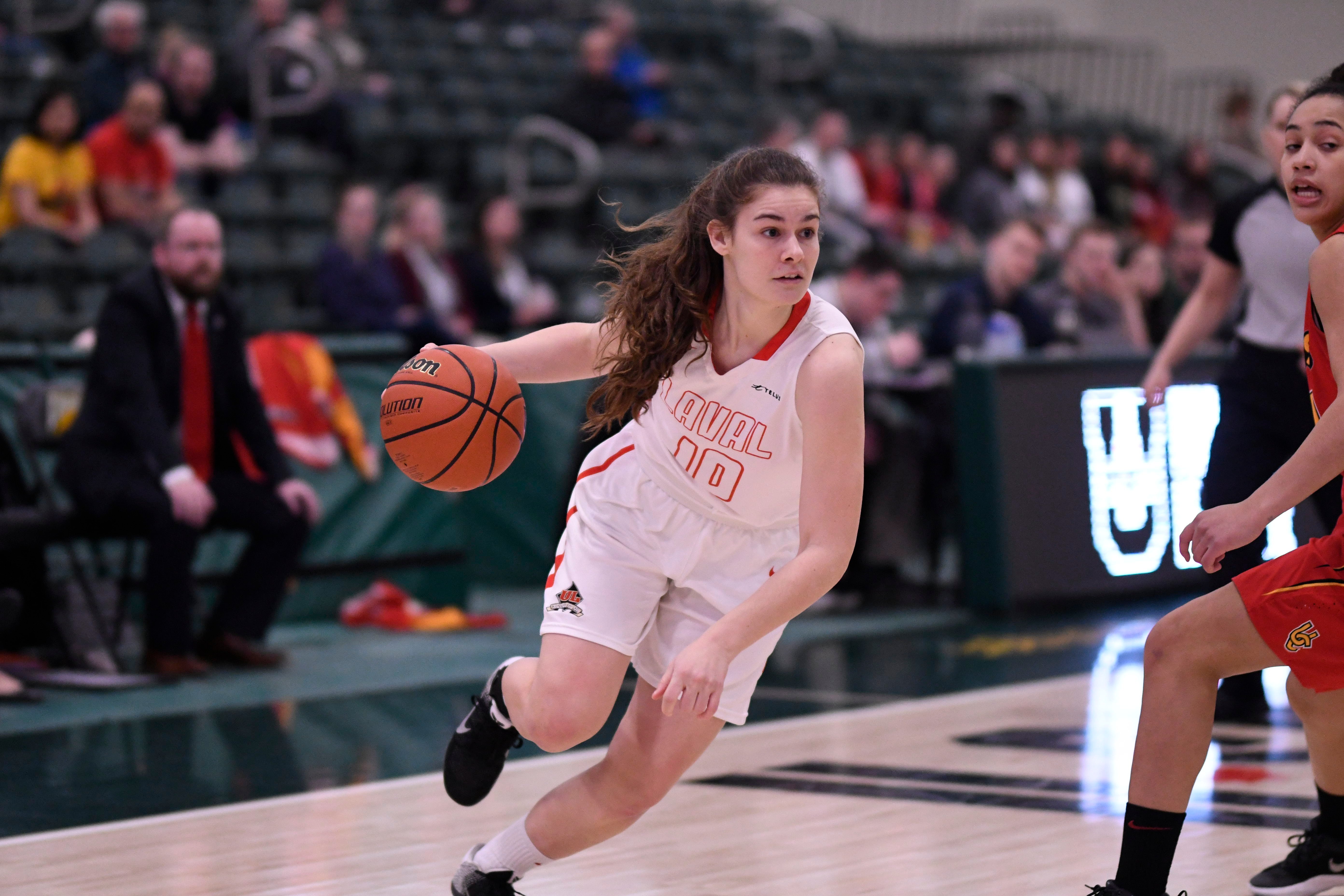 Calgary never trailed after that, though Laval did tie it up briefly before a pair of free throws by McIntosh put her team back up for good – despite Calgary’s final field goal of the game coming with just under five minutes to go. While the Dinos went the final 4:50 of the contest without a field goal, they hit seven of their 10 free throws in that time to keep Laval at an arm’s length.

Laval’s Sarah-Jane Marois hit a layup with three seconds left that made the score 69-68 for Calgary, but the Dinos’ Katie Upham hit a pair of clutch free throws to get the lead back up to three. That led to the last play of the game, which saw Gagné attempt a turnaround three-pointer from well beyond the top of the arc that fell short of the mark.

Hatch, Brianna Ghali, and Hilary Annich all played their final games for Calgary today and finish their careers with a victory.

“It’s one of those things that’s a natural cycle but it’s also upsetting at the same time,” Jennings said about his three fifth-year players. “I’m very proud of Hilary, Brianna, Shannon, and of course Brie Wilcox. It’s a real classy group and I’m sad to see them go.”

Calgary’s victory ensures that three Canada West schools will finish in the top five at the national tournament, with host and conference champion Regina set to battle to CW silver medalist Saskatchewan in Saturday night’s semifinal.

Consolation Semifinal #2: Laval moves on to consolation final with win over Acadia