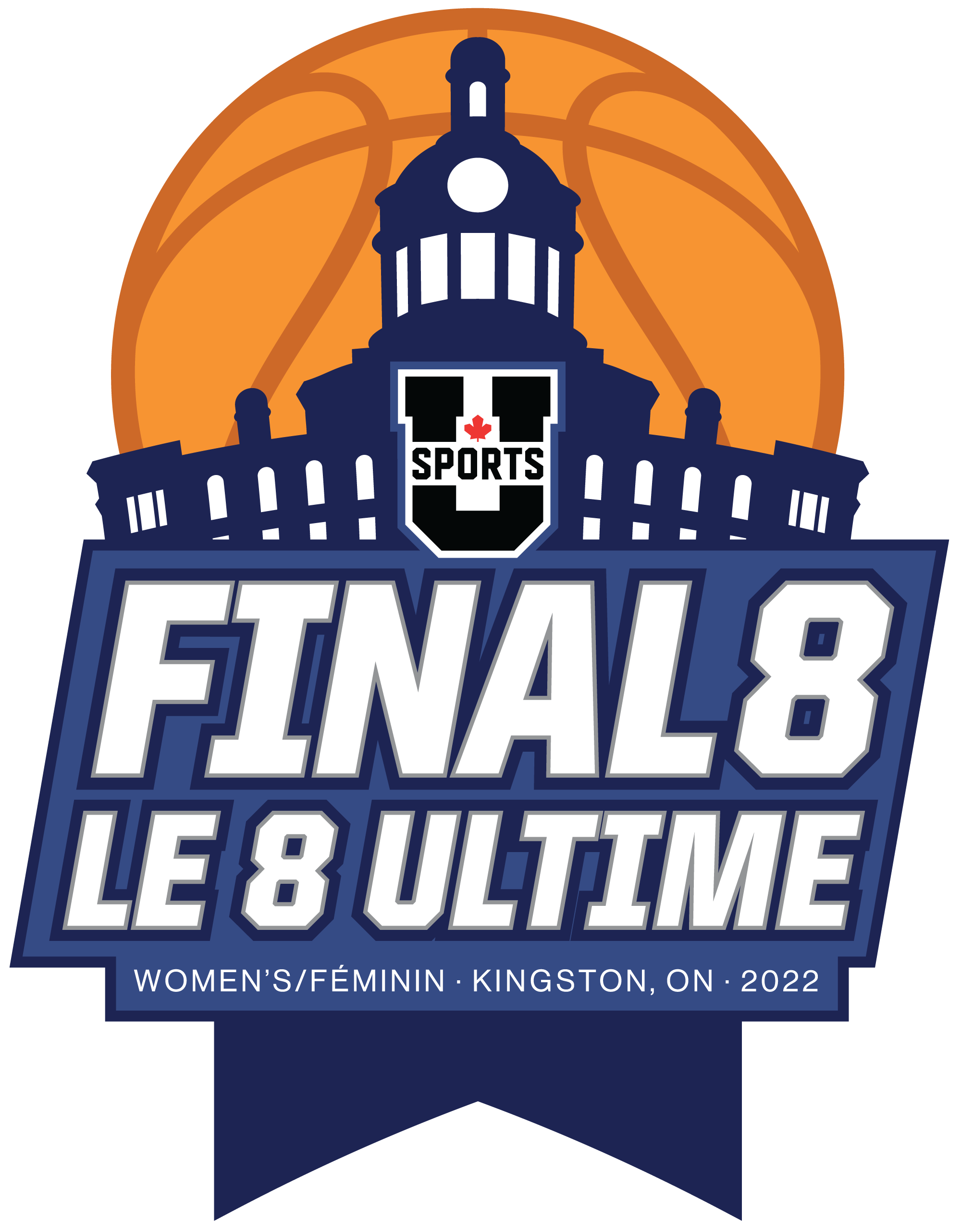 The reigning champion Saskatchewan Huskies look to retain their title at the U SPORTS Women’s Basketball Championship Presented by the University of Queen’s opens in Kingston later this week.

The Huskies, who have gone 14-2-0 this season, are eyeing their third U SPORTS banner to become the first back-to-back champions since the Windsor Lancers won five straight titles from 2010-2015. The top-ranked Ryerson Rams will look for their first Bronze Baby in program history on the heels of an undefeated season and OUA Championship.

The 2022 U SPORTS Women’s Basketball Championship, kicks off on Thursday at the Athletics and Recreation Centre (ARC) and concludes next Sunday with the gold-medal game at 6:00 p.m. ET / 3:00 p.m. PT.

English digital coverage can be accessed on cbcsports.ca the free CBC Gem streaming service the CBC Sports App and  usports.ca and in French on usports.ca. 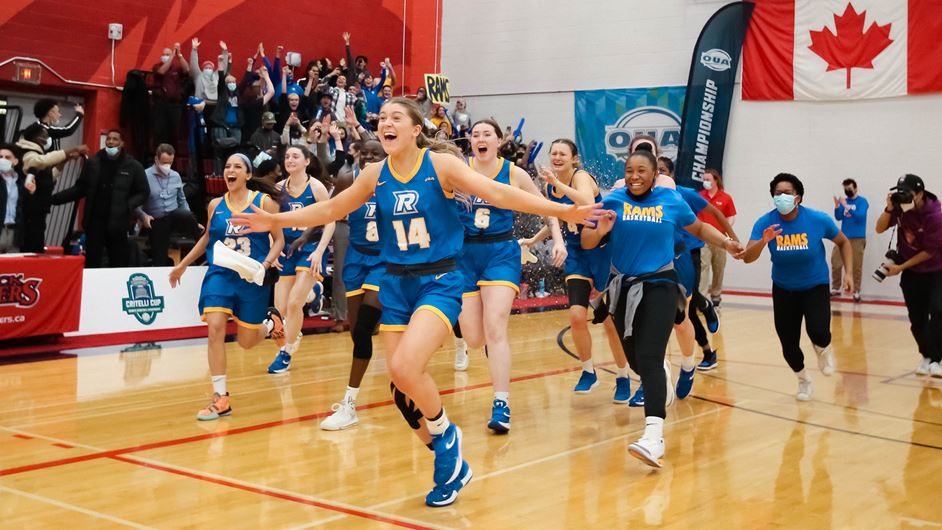 The Rams enter the Final 8 national championship following an unbeaten season in conference play in the OUA. The regular season saw the Rams post a 14-0 record, while their playoff run saw them beat three nationally-ranked teams in Queen’s, Carleton, and Brock to claim the second OUA championship in program history.

The Rams are riding a wave of momentum into the national championship following their dramatic OUA title. Down 22 points with seven minutes to play, the Rams came all the way back to force overtime then claim a two-point win at Brock. Four different Rams earned conference honours this season, including coach Carly Clarke as Coach of the Year and two first-team all-stars in Mikaela Dodig and Marin Scotten. The Rams owned the nation’s best defence in the regular season, allowing just 50.1 points against on average, while netting 74.4 points per game. The team was ranked as high as No. 3 in the nation throughout the year

The Rams are claiming the No. 1 seed for the first time in program history, and only the third time for any sport at the university – following men’s basketball in 2017 and 2018. They are in search of their first Bronze Baby championship.

The Rams had the stingiest defense in all of U SPORTS, allowing just 50.1 points per game,

Bench boss Carly Clarke is also an assistant coach with the Canadian Senior Women’s National team who competed at the 2020 Tokyo Olympics and will return to the team for the next cycle, looking ahead to Paris 2024 Games. Clarke was the winner of the OUA Coach of the Year Award. 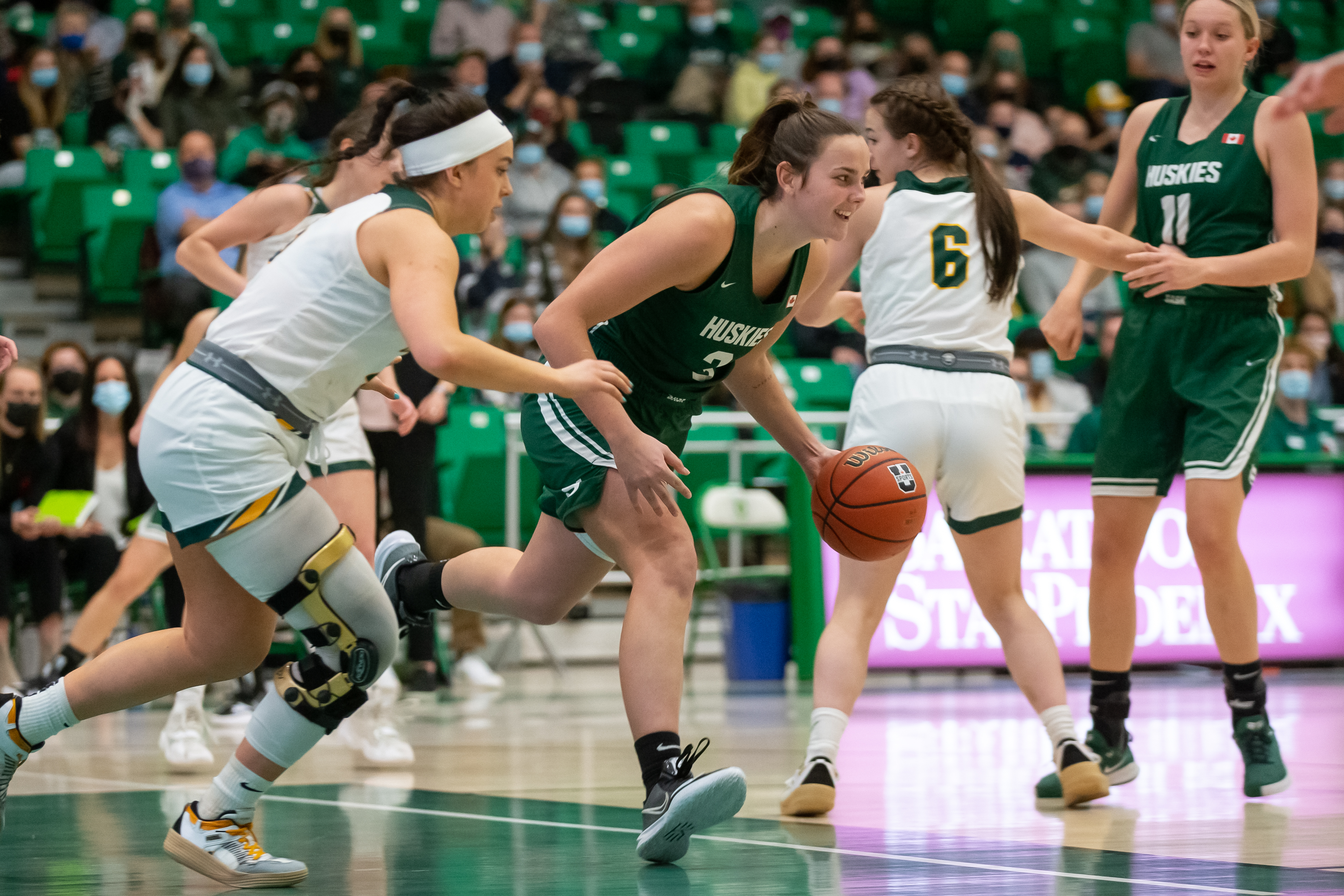 The Huskies picked up where they left off in 2020, running out to a 14-2 regular-season record (7-1 at home, 7-1 on the road). Saskatchewan won their fifth Canada West Championship in six seasons and qualified for their eighth straight U SPORTS Final 8 appearance.

The Huskies were led from the front by 5th-year forward Summer Masikewich. Masikewich made her name known as one of the conference’s best once again this season, as she finished the year inside the top five in the Canada West in points-per-game, rebounds-per-game, field-goal percentage and blocks-per-game. Her dominance earned her a Canada West 1st Team All-Star selection as well as the Canada West Defensive Player of the Year. 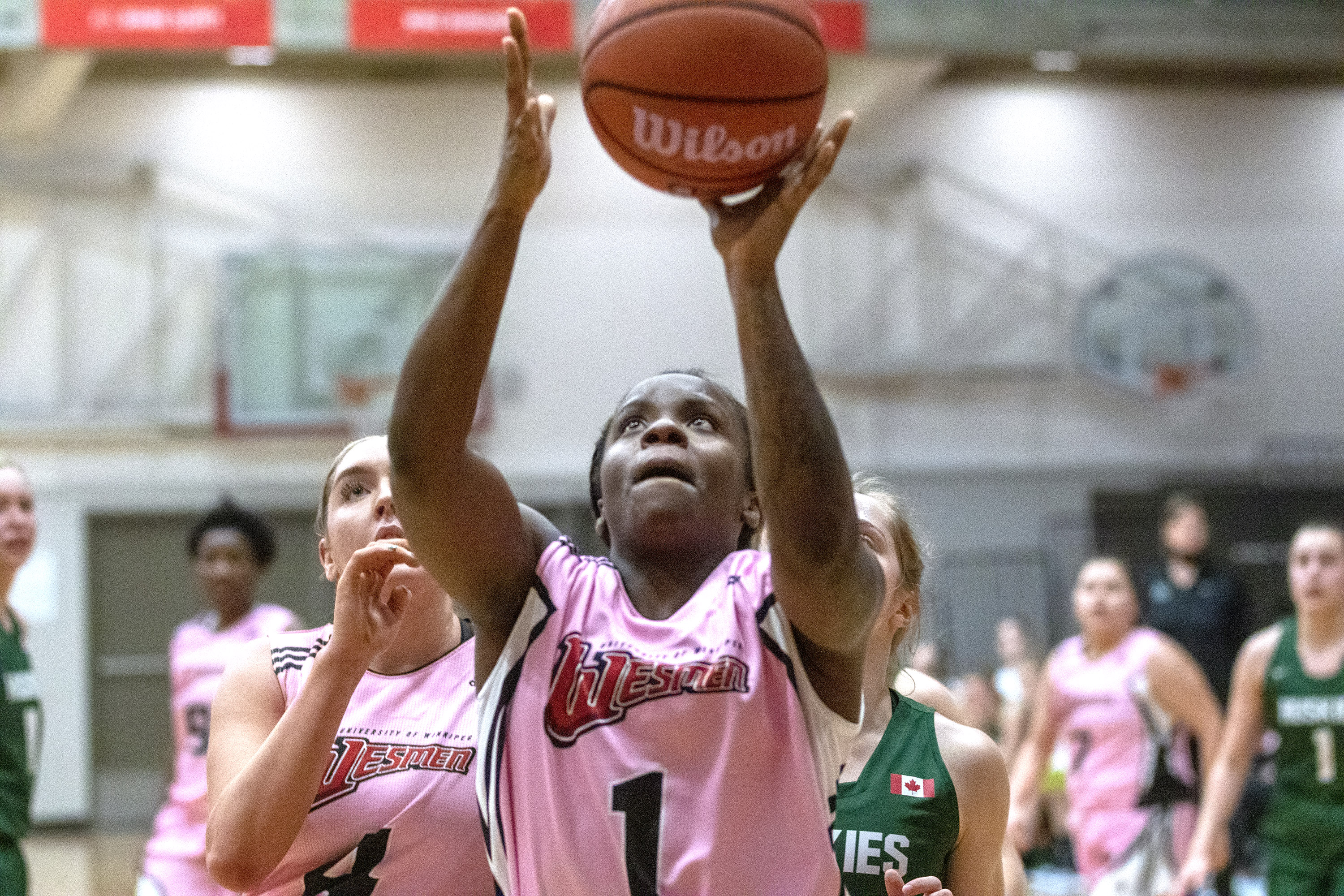 The Winnipeg Wesmen are making their first appearance at nationals since 2004-05 after coming runner-up to the Saskatchewan Huskies in the Canada West Championship.

After a 14-2 regular season and a Canada West silver medal, the Wesman will look for their fourth Bronze Baby after winning three straight from 1993-1995.

Winnipeg will rely on fifth-year senior and Canada West Player of the Year, Keylyn Filewich who averaged a double-double with 17.3 points and 10.5 rebounds per game to go along with 1.1 blocks per game on the defensive end.

The Wesmen ranked tops in U SPORTS in points scored per game with 81.3 in the regular season, while only allowing 62.5 points against. Winnipeg will look to continue their offensive dominance in the hopes of bringing home another U SPORTS banner. 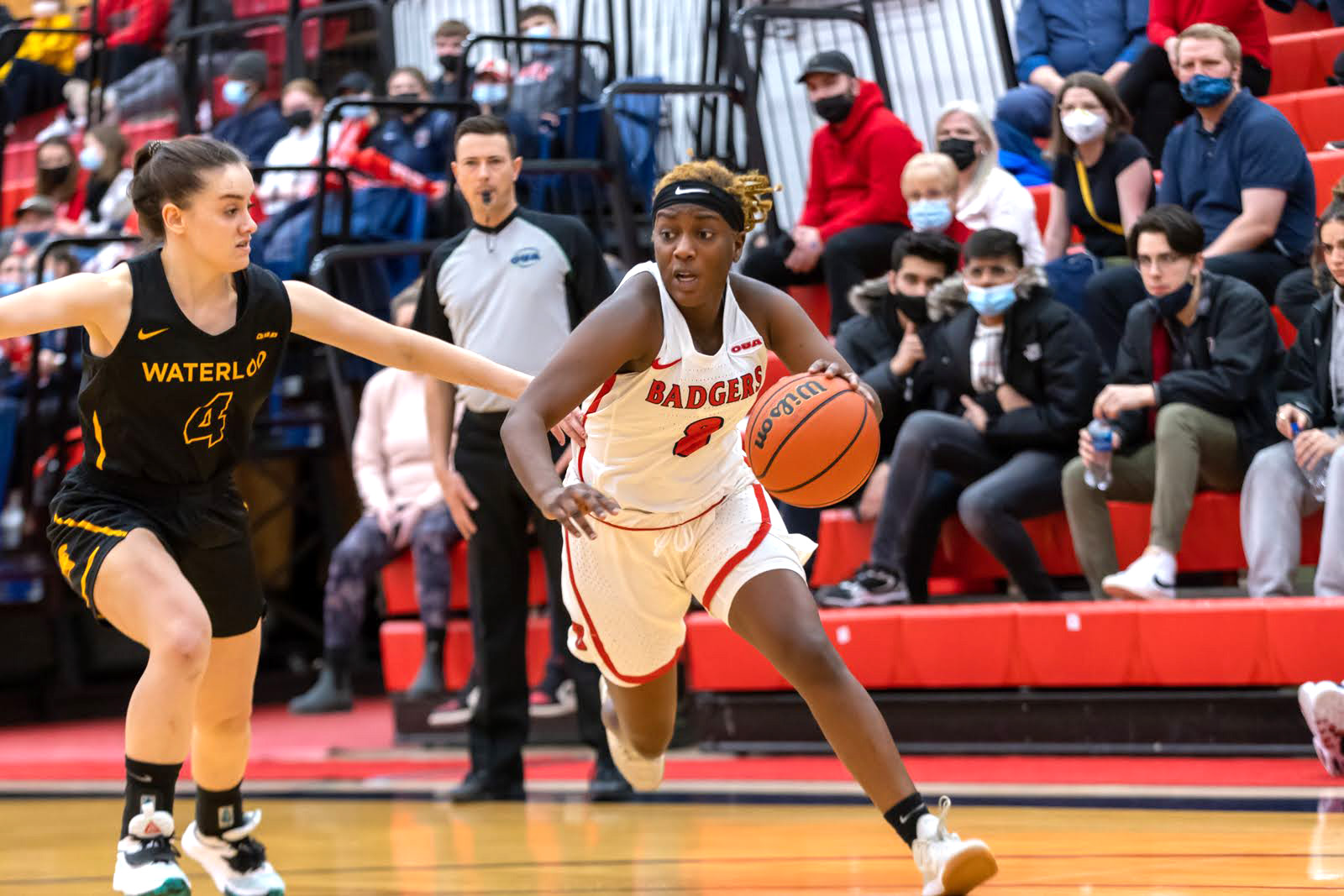 The cancellation of the 2020-21 Ontario University Athletics (OUA) season because of the COVID-19 pandemic has meant significant roster changes for many teams.

But as Brock University returns to a second-straight U SPORTS Final 8, the Badgers roster is virtually unrecognizable from 2019-20, when they won the OUA championship and went on to take the silver medal at the national championships in Ottawa.

With 2020 U SPORTS Coach of the Year Mike Rao back at the helm, however, the Badgers have shown that they’re still just as strong as two years ago, going 12-0 in the regular season to win the OUA West Division. Brock spent most of the year as the No. 1 team in the country before being edged out for the top spot by Saskatchewan during the post-season.

Dominant forward Sam Keltos, the OUA West MVP, left the team for a pro team in Australia prior to the start of the playoffs, but the rest of the lineup stepped up to secure another trip to the Final 8.

“This team really bought in and worked hard,” said Rao, who was also named OUA West Coach of the Year. “It shows their resolve and understanding of the game.”

The Badgers beat the McMaster Marauders 49-45 in the OUA quarter-final and powered past the Western Mustangs 77-58 in the semifinal before hosting Ryerson in a rematch of the 2020 Critelli Cup before a packed crowd at Bob Davis Gymnasium. 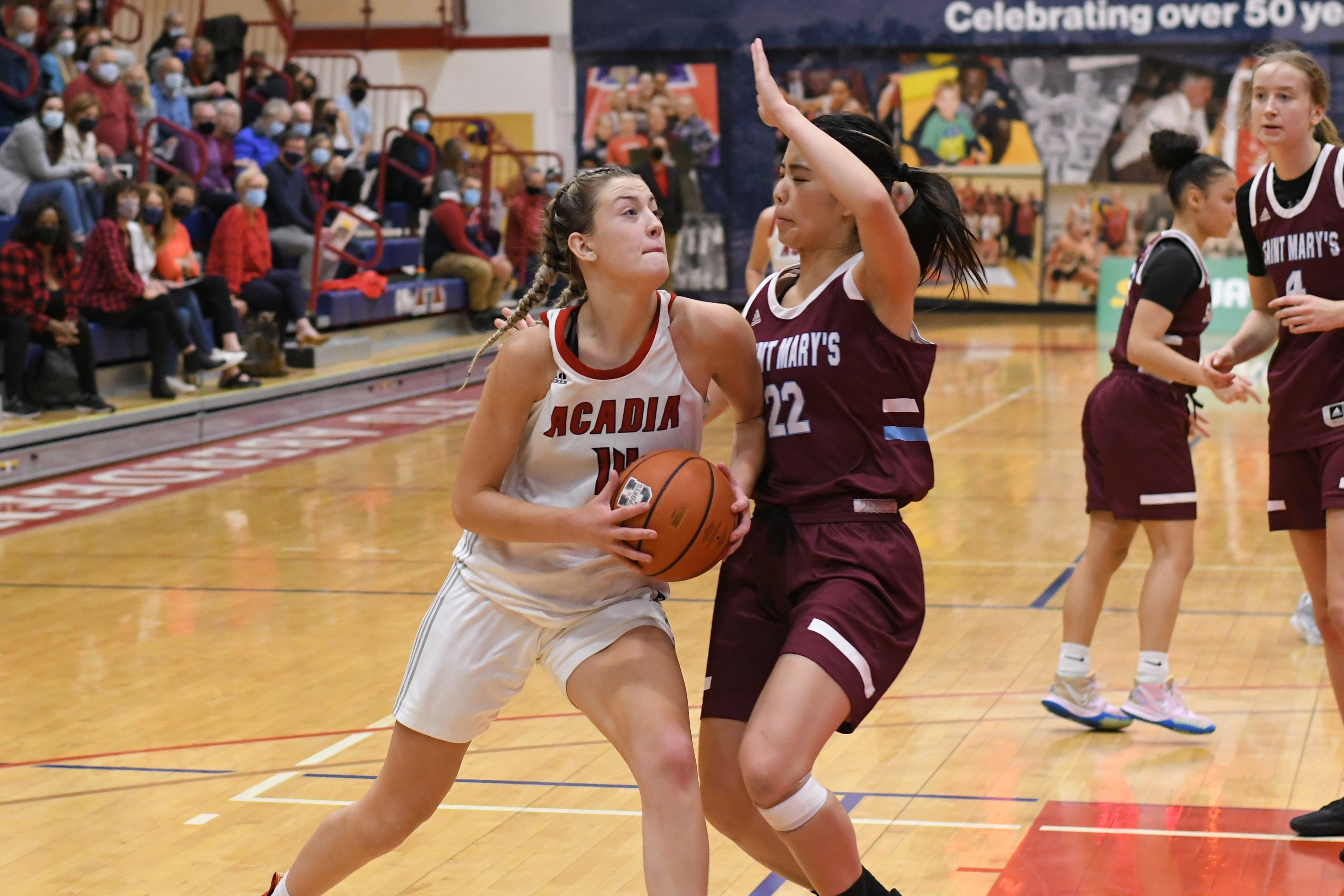 With a 4-1 preseason record against AUS opponents only, the Axewomen opened the regular season with two losses in a row against rival Saint Mary’s. Entering November with an 0-2 record, the Axewomen grabbed four wins a row to improve to 4-2.

Matched up against the 2019-20 AUS champion UPEI Panthers at home, the Axewomen fell short in extending their winning streak to five with a 74-58 loss to the Panthers. Ending the first half of the season with a win against Dalhousie, the 5-3 Axewomen returned to play on February 18th after a six-week delay because of COVID-19 restrictions in Atlantic Canada.

Beating Cape Breton in a home-and-home matchup on the opening weekend of the second half of the season, the Axewomen followed up with a convincing win over Saint Mary’s on Friday, Feb. 25 in Halifax followed by a loss to the Huskies at home on the Sunday.

The Axewomen wrapped up the AUS regular season with a cancelled game, a win against UPEI and two wins against StFX. Seeded second in the AUS standings, based on winning percentage since the schedule was not balanced, the Axewomen topped StFX in the quarterfinals and then posted a comeback win over Saint Mary’s in the semifinals before doing the same against Cape Breton in the finals. Veinot’s 34 point performance against Cape Breton earned her the Subway Player of the Game and AUS Championship Tournament MVP.

The Axewomen captured their third championship in the last four season. Senior forward Jayda Veinot was named the 2022 AUS Most Valuable Player; second-year forward Elizabeth Beals-Iseyemi was named the first-team AUS All-Star squad and first-year forward Samantha Russell was honoured as a member of the AUS All-Rookie Team. 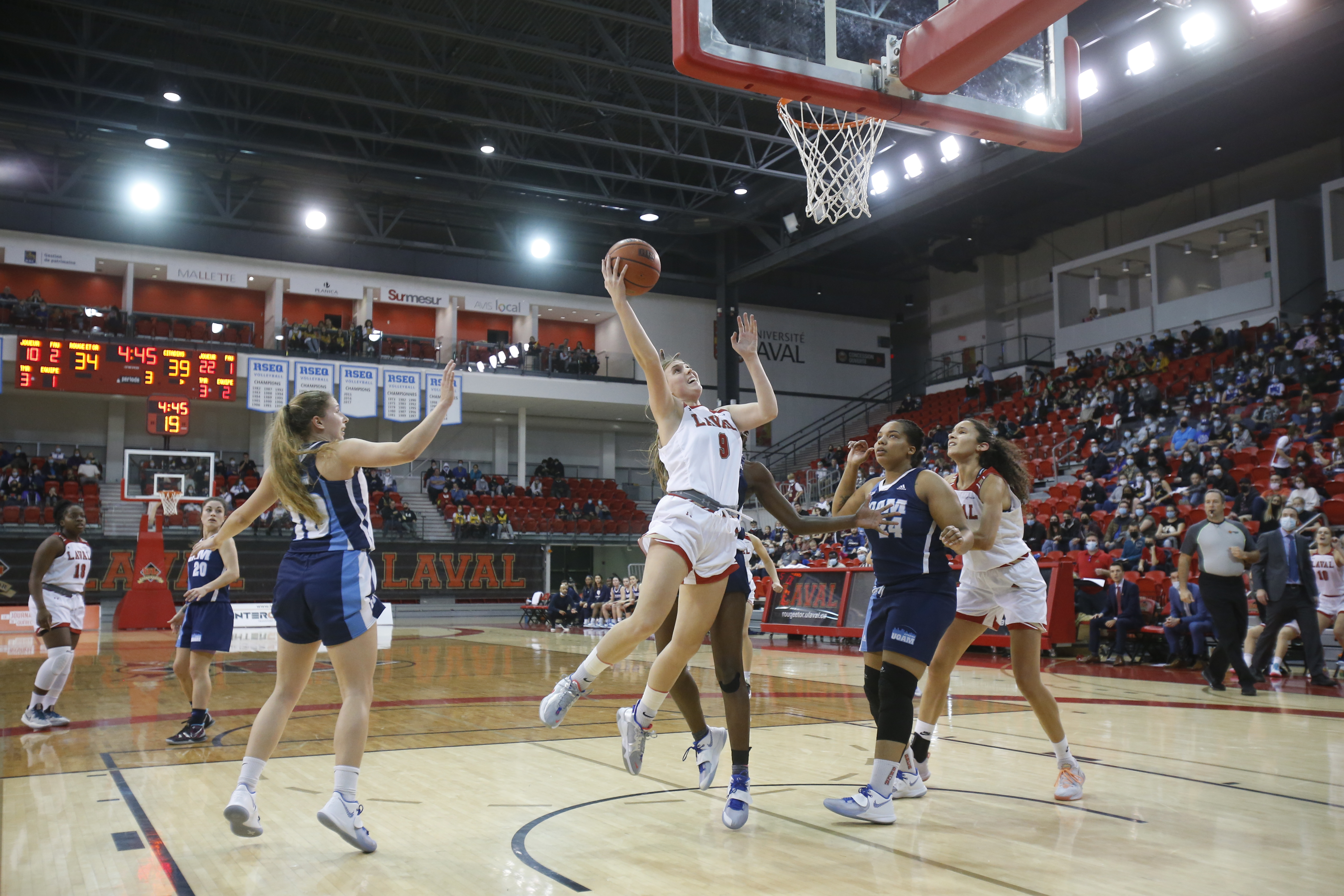 The Rouge et Or won its third conference title in a row in 2021-22 with a 75-69 win over the UQAM Citadins. It was a surprise final between the third and the fourth seeds, marking the first since 1994 that the third seed is winning it all. For head coach Guillaume Giroux, it will be his 5th trip to the U SPORTS Championship since taking over the team six seasons ago.

In a shortened season because of the COVID-19 pandemic, Laval had bet on a mix of rookies and last-year players. Of the 13 student-athletes on the roster, 10 are rookie or last-year players (5-5). Coach Giroux and the Rouge et Or has overcome the loss of Khaleann Caron-Goudreau, the reigning two-time national defensive player of the year, with the excellence of Lea Dominique, who stepped up at the right time. She led the RSEQ with a ,533 field goal percentage, adding a conference second-best 8.3 rebounds per game. Rookie Sabrine Khelifi has been a cornerstone during the playoffs, leading the Rouge et Or in points in both games. 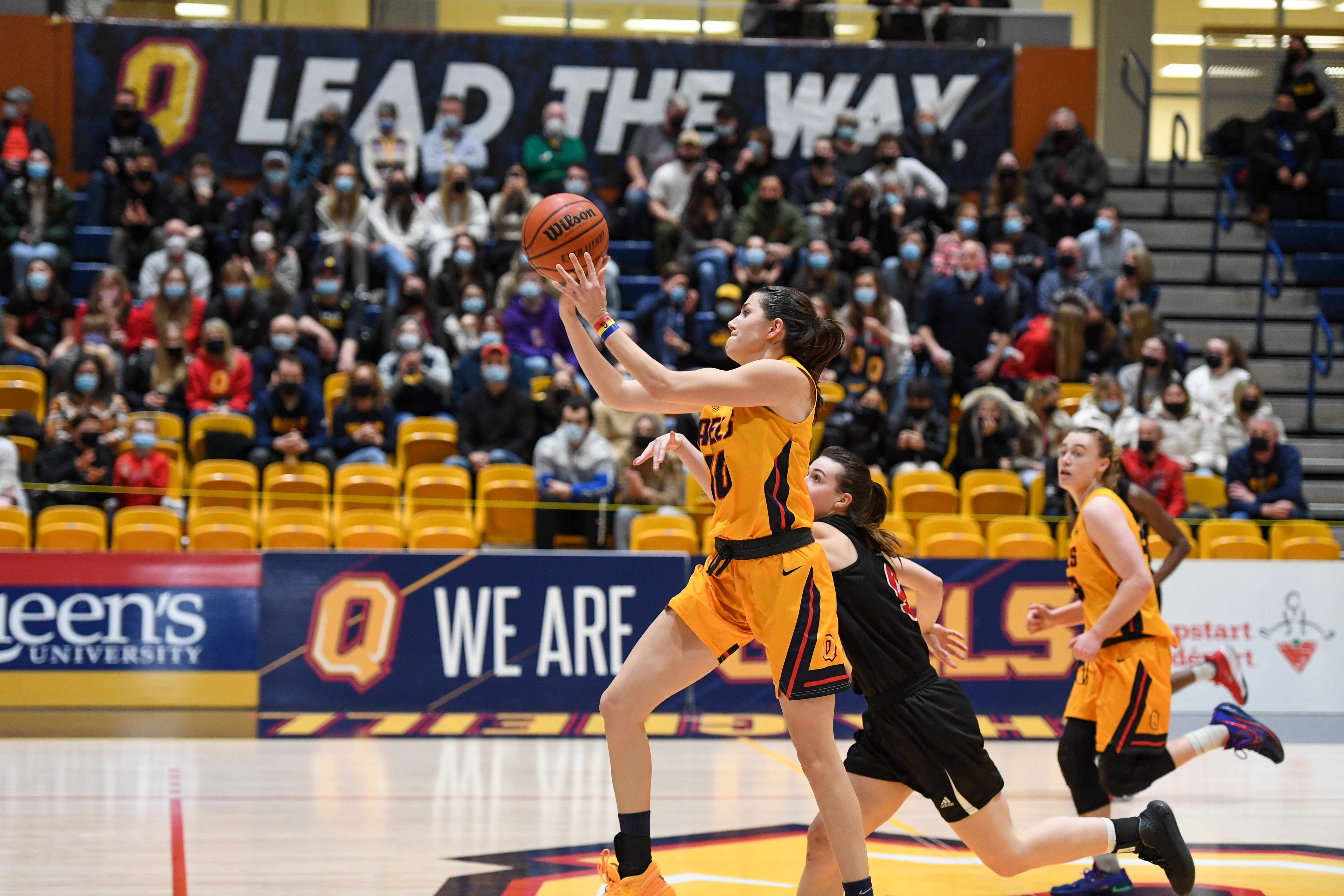 Queen’s Women’s Basketball finished fourth in the OUA East Division standings with a 9-5 record in Head Coach Claire Meadows’ first season with the team. After a narrow three-point loss to the Rams to start the season, the Gaels won three straight and remained above .500 the rest of the regular season.

After opening the playoffs with a 74-65 win over the York Lions, the Gaels lost to the undefeated Rams in the OUA East Division semifinal. Queen’s ranked sixth in the OUA in offence, averaging 71.6 points per game, and seventh in the conference in defence, giving up 60.7 points per game. 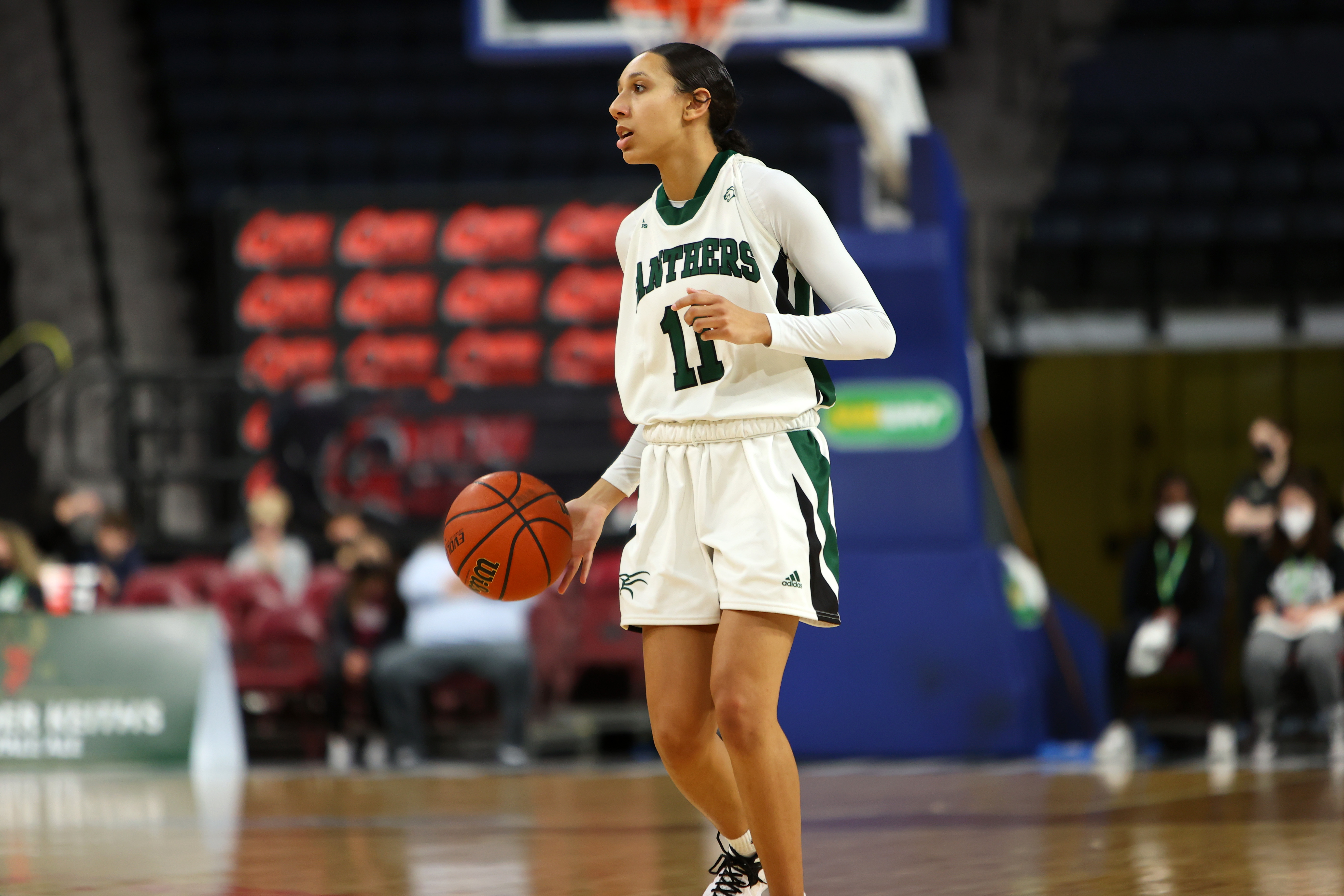 The UPEI Panthers will be looking for their first U SPORTS national title on the heels of a 11-2 regular season and a semifinal defeat against the Cape Breton Capers.

The Panthers employ a balanced squad that can get it done on both sides of the court. UPEI’s 75.5 points per game ranked sixth in the nation, while their offensive efficiency ranked third. On the defensive end, the Panthers allowed only 60.8 points per game, good for eleventh in U SPORTS.

Centre Carolina Del Santo cleaned the glass all season long for the Panthers, averaging an eye-popping 15 rebounds per game. Del Santo was also named the AUS Defensive Player of the Year and a second-team AUS All-Star,