The Carleton Ravens outscored the Dalhousie Tigers by 14 points in the fourth quarter to secure a 76-65 victory in the second semifinal game of the U SPORTS Men’s Basketball Final 8.

“It was a great game and we expected that from Dalhousie,” said veteran Carleton head coach Dave Smart, noting the Tigers came in on a “hot streak,” having won 12 consecutive games, including four on the Scotiabank Centre floor.

“They gave us everything we could handle. They are so solid in what they want to do as a team,” he added.

After a back-and-forth start to the match-up, the Ravens led 12-10 after five minutes, keyed by four points from First Team All-Canadian forward Eddie Ekiyor, while Keevan Veinot and Cedric Sanogo meshed five points apiece for the Tigers, including three-pointers from each player.

With strong work on the offensive boards, and stifling defence, the Ravens extended to an 18-13 edge late in the opening stanza.

Spurred by their ramped up defence, the Tigers notched the final four points of the first quarter to narrow the Ravens’ lead to 20-13.

Yasiin Joseph of the Ravens topped all scorers, with eight points, on three-out-of-four shooting. 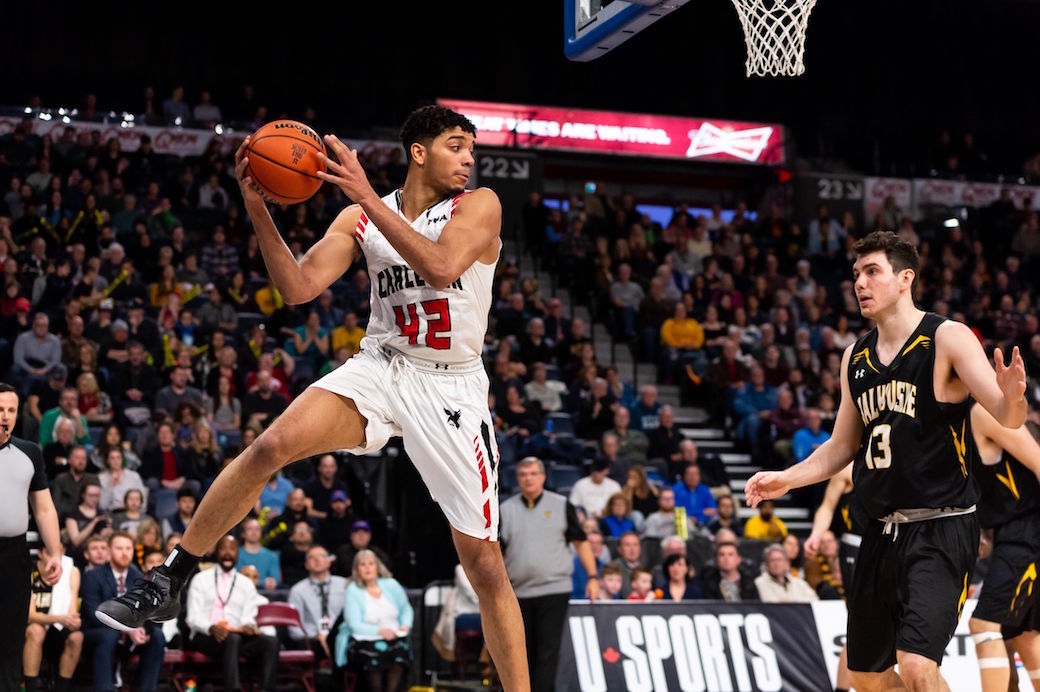 Early in the second quarter, after a turnaround jumper off one leg by TJ Lall, Carleton widened their advantage to 26-19.

The Tigers – specifically, Sascha Kappos – electrified the hometown crowd, with seven consecutive points, including a three-pointer and slam dunk, to knot the score 26-26, midway through the second quarter.

With a deep three-pointer from Jordan Brathwaite, in the final 20 seconds, the Tigers capped a 14-6 burst and led 33-32.

The Tigers, also showing their defensive prowess, helped force nine Raven turnovers in the first half.

Lall drained a three-pointer, just before the buzzer, to give the Ravens a 35-33 edge heading to the locker room.

Early in the third quarter, the teams traded hoops, including three-pointers from Munis Tutu of the Ravens and Sanogo of the Tigers. After a sensational block by Veinot on Ekiyor, Alex Carson, with a shot from downtown, sliced the Raven lead to 42-41.

By the midway point of the quarter, Carleton was up 46-42.

After the Ravens extended their edge to six points, Kappos capped off an old-fashioned three-point play to cut the advantage to 48-45.

A soaring shot block by Kappos, sandwiched between three-pointers from Brathwaite and Veinot, tied it 51-51.

Just before the third-quarter buzzer, Xavier Ochu grabbed an offensive rebound – off a Carson missed free throw – and sank the basket to give the Tigers a 56-53 edge.

Early in the fourth quarter, after the Tigers took a five-point edge, a three from Tutu highlighted a 7-0 spurt to put the Ravens up 60-58.

After a huge block by Ekiyor on a base line drive from Veinot, the forward showed his soft touch on consecutive lay-ups to give the Ravens a 72-64 lead with less than two minutes remaining in regulation time.

With less than a minute remaining, Ekiyor gave Carleton a double-digit lead – 75-65 – when he was fouled on a monster dunk and hit the free throw for a three-point play.

“I am really proud of our team – the boys played their butts off against a very, very, very good team,” said Tigers head coach Rick Plato.

The Ravens outscored the Tigers 23-9 in the fourth quarter.

“The difference in the game was offensive execution, especially in the fourth quarter,” said Plato, noting Dalhousie’s low point output over the final 10 minutes.

“You can’t do that against a team like Carleton,” he said.

Ekiyor, the Ravens Player of the Game, fashioned a double-double with 21 points and 13 rebounds, while Tutu added 21 and five assists. Joseph also meshed double-digits with 15.

Smart said late in the game the Ravens were successful running a play that served them well in previous years, but a set they had not used as much this season.

“We were able to get a couple of good looks,” he added.

The Ravens will take on the Calgary Dinos in the Men’s Basketball Final 8 gold medal game Sunday, at 5 p.m. ET / 2 p.m. PT, on Sportsnet 360, Sportsnet Now and TVA Sports, while the Tigers will tip off against the Ryerson Rams in the bronze medal game at 1 p.m. ET / 10 a.m. PT.