The Montreal Carabins finished fifth in the nation after a 7-1 win over the StFX X-Women in the consolation final on Sunday morning at the U SPORTS Women’s Hockey Championship at Thompson Arena.

“We’re proud of what we did - we did what we had to do,” said Carabins head coach Isabelle Leclaire. “We finished in the top five, but honestly I think our team was in the top four and deserved to play for a medal. But we didn’t, we’re not the champions, but I think we’re winners in the end.”

Montreal had five different goal scorers, with Kim Poirier registering two goals and Annie Germain notching a goal and an assist. For the X-Women, Lydia Schuman had the lone goal.

The Carabins came out strong to start the game, generating plenty of opportunities in front of the StFX net, leading with 12 shots to StFX’s seven. 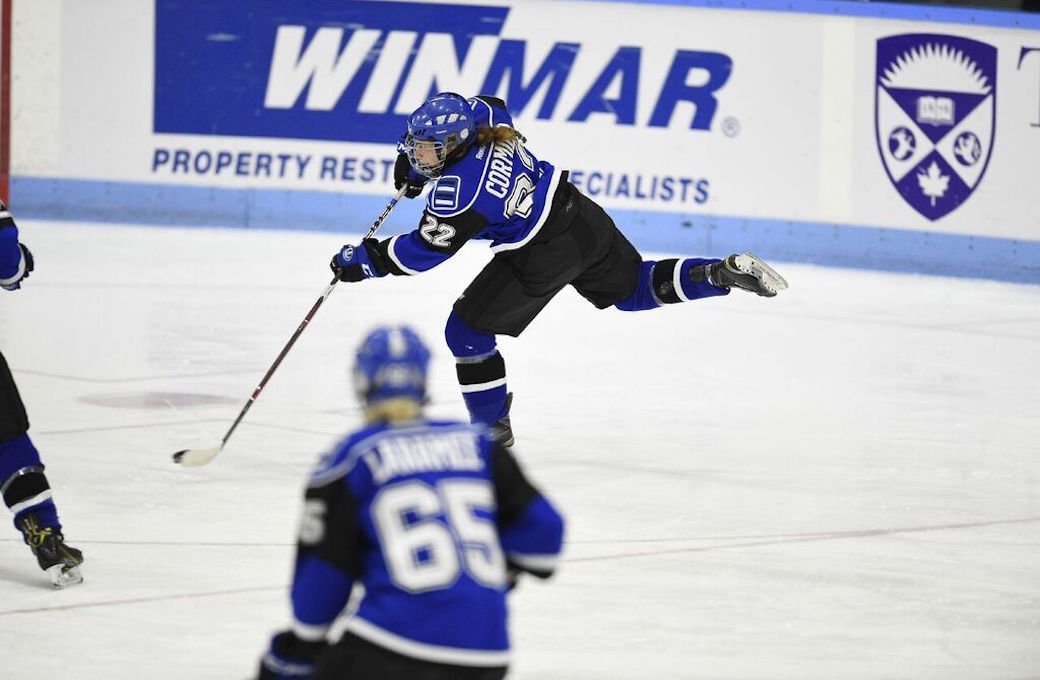 Despite the Carabins’ commanding presence, it was the X-Women who got on the scoresheet first, when Alley Goodreau slipped the puck past the Montreal defender to Schuman who was waiting at the doorstep, flicking it over the pads of Marie-Pier Chabot for the 1-0 lead.

“I think you look at the first period, adrenaline kicked in and we were moving alright. Montreal is a good hockey team and a good skating hockey team,” said StFX head coach Ben Berthiaume. “I think the second period kind of caught up to us a little bit and we got caught on our heels and just couldn’t get back from it.”

Although the X-Women escaped the first period with a 1-0 lead, it would not stay that way for long.

“We were still very confident because I think they scored on their first shot of the game, but actually we were dominating – our offence was great,” said Carabins head coach Isabelle Leclaire. “We joked a bit and tried to stay composed and keep believing that our offence would produce and that our power play would score and then it finally did.” 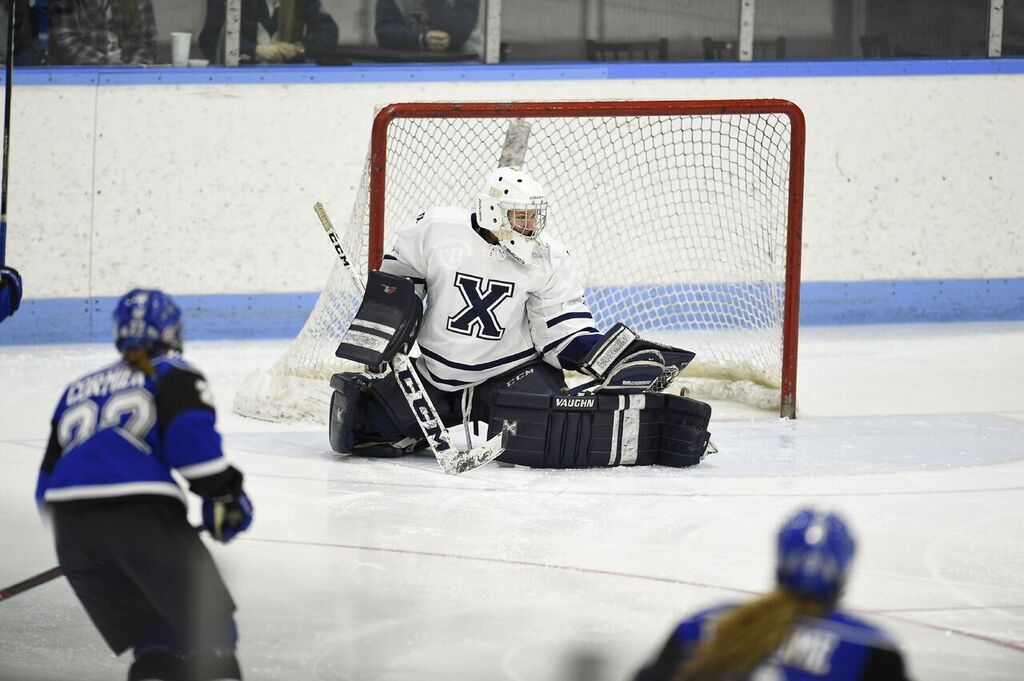 After a 5-on-3 from the first period rolled over to start the second, Montreal made quick work, tying the game just 27 seconds into the frame when Poirier blasted it home from the point.

The goal opened the floodgates, with the Carabins exploding for three goals in less than 90 seconds just six minutes later.

Montreal took the lead on a shot from the point, with the rebound trickling out for Alexandra Boulanger to pounce on, and fire the puck home.

Emmanuelle Passard got on the board 47 seconds later, when Montreal cycled the puck behind the net. Marie-Pier Dube passed the puck from below the goal line to Passard who was waiting in the slot and sent a one-timer over Carley Molnar’s glove to extend the lead.

Laurie Mercier contributed to the Carabins offence next, scoring off of a wraparound play to put her team up 4-1. 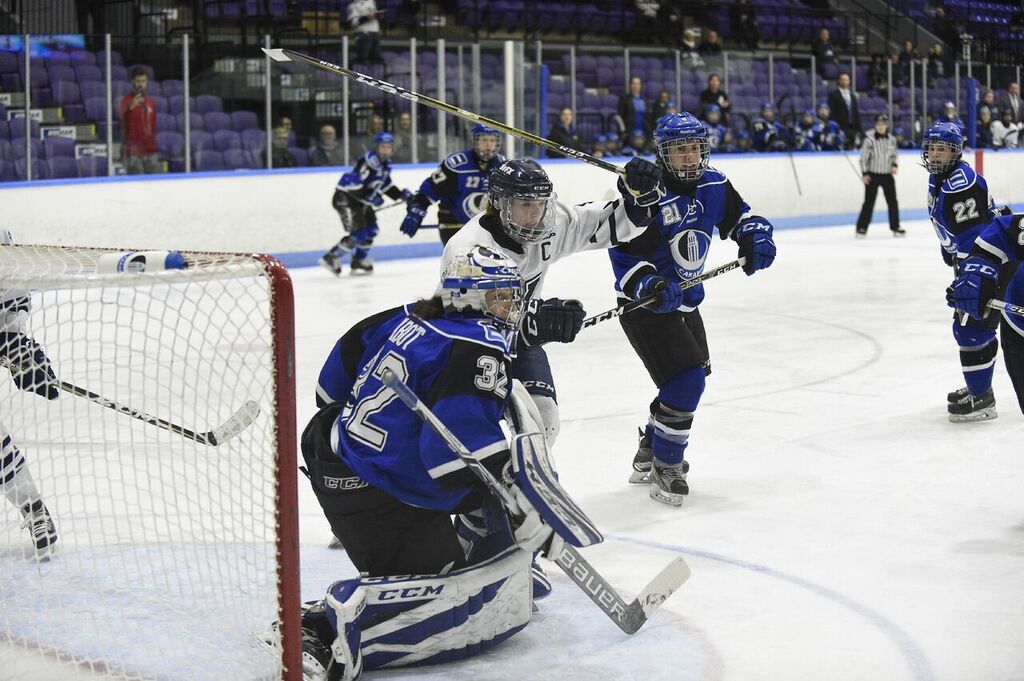 “Of course it can change a game really quickly - it gives us confidence that we can play offensively that way,” said Chabot. “t’s way easier for me as a goalie and for our defencemen when we lead by a few goals.”

Germain was next to get on the scoresheet, skating through four different StFX defenders to unleash a wrist shot top shelf.

Poirier notched her second of the night when a scrum in front of the net screened Molnar, allowing Poirier to tap the puck in amidst the confusion, making it 6-1 at the end of the second period.

The Carabins added another goal in the third before lock things down defensively and preventing StFX from registering another point, skating away with the 7-1 win.

“The first game here we didn’t get the outcome we wanted, but our goal was to win and to play on Sunday and to get the fifth place, and I’m just as happy to finish here with two wins,” said Chabot.

The Carabins wrapped up fifth place in the country with the win, while the X-Women nabbed sixth, both improvements over last season.

“Every time you go to a national tournament you learn a lot. Our first-year players especially have learned a lot, and we know we still have a couple more steps to go,” said Berthiaume. “We knew coming into here that some teams were going to be very strong, and I think we look at next year our recruiting class is very good and we’ve addresses some issues that we need.”

The U SPORTS Women’s Hockey championship continues throughout Sunday, with the bronze medal game between the Saskatchewan Huskies and Concordia Stingers, before concluding with the national champion between the No.1 seed Manitoba Bisons, and the host Western Mustangs.

Semifinal 2: Bisons move on to gold medal game with shootout win over Concordia