Alexandre Goulet scored two goals, including the overtime winner, as the UNB Varsity Reds beat the Saskatchewan Huskies 5-4 to take the bronze medal at the 2018 U SPORTS Cavendish Farms University Cup.

“I think it’s a testament to the character of our group,” said Varsity Reds head coach Gardiner MacDougall.

Goulet also had an assist for a three-point game for the Varsity Reds.

But it was Saskatchewan that opened the scoring, when Levi Cable tipped in a point shot from Jordan Fransoo six minutes into the first to put the Huskies up 1-0.

Saskatchewan would add to that lead too. 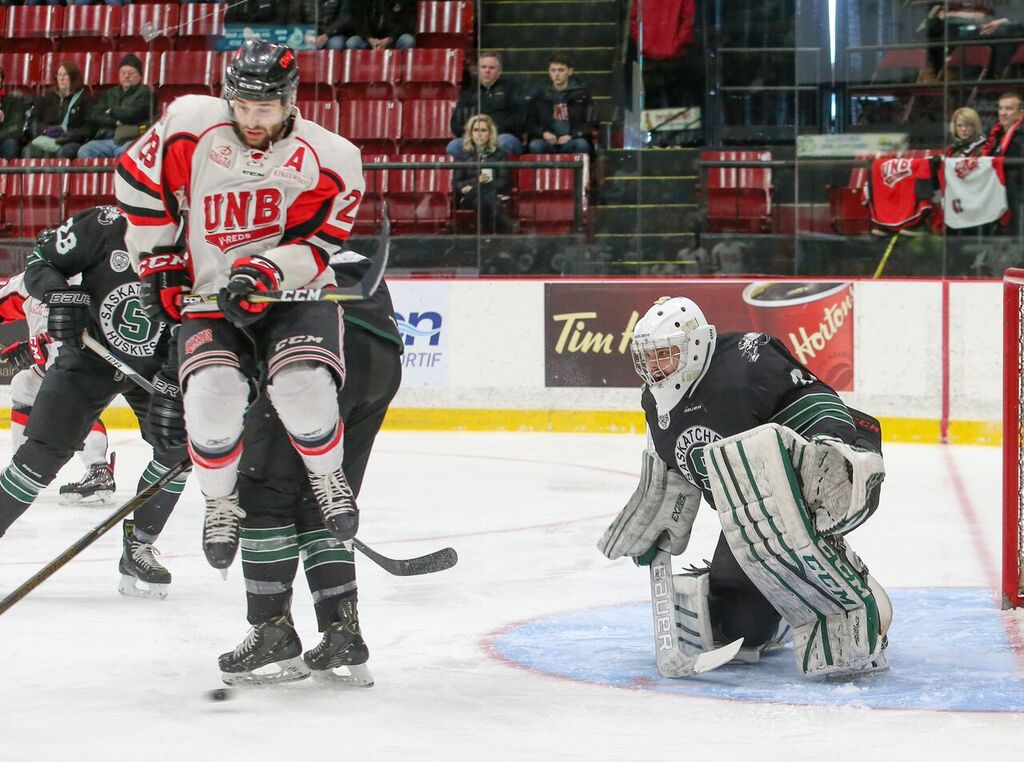 Jaimen Yakubowski went around Alex Dubeau and appeared to have his shot swept off the goal line. However, after a review, the goal judge ruled the puck crossed the line and the Huskies went up 2-0.

The Varsity Reds responded a short time later, scoring a shorthanded goal in the final minute of the first. Matt Murphy made a nice move and put a backhand shot past Taran Kozun to cut the Huskies’ lead to one.

A shot from the point by Mackenzie Johnston hit a stick in front of the UNB net and went past Dubeau to restore the Huskies’ two-goal lead just 2:32 into the second period.

Then, on a 3-on-1 just two minutes later, UNB’s Tyler Boland put a perfect shot past Kozun’s glove to once again make it a one goal game.

Goulet tied the game two minutes later with a hard shot from the high slot.

The Varsity Reds kept the pressure on the Huskies, and Oliver LeBlanc put a point shot through traffic to give UNB the lead 4-3. 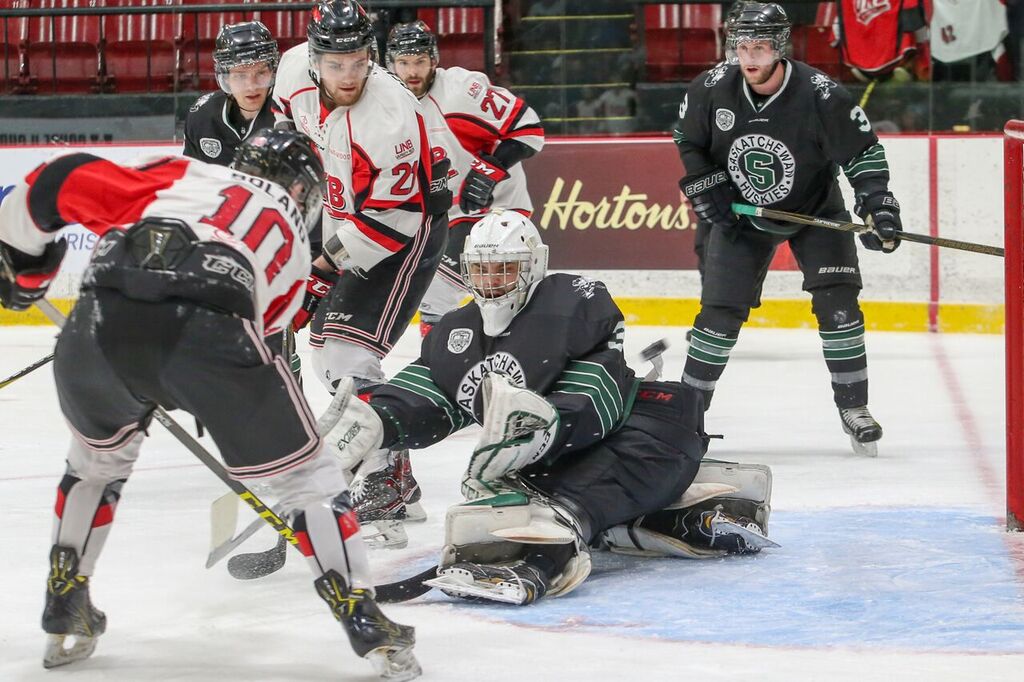 But Saskatchewan would tied it up again before the end of the second, when Collin Shirley got behind the Varsity Reds defence and eventually lifted the puck over Dubeau. Carson Stadnyk batted the puck out of mid-air to tie it at four.

“I thought our penalty killing was fantastic in the second period, it allowed us to stay in the game,” said Huskies head coach Dave Adolph.

Both teams hit multiple posts and traded multiple power play chances in the third, but the game remained tied after 60 minutes.

Shots on goal were 36-19 for the Varsity Reds at the end of regulation.

Just over four minutes into overtime, Mark Simpson centered a pass to Goulet, who found the back of the net to give UNB the 5-4 win and the bronze medal.

“That was a great play from Mark Simpson,” said Goulet. “I was lucky that it went in.”.

The Varsity Reds finished with 38 shots while Saskatchewan had 22.

Dubeau made 18 saves for the Varsity Reds, while Taran Kozun made 33 stops in the net for the Huskies.

Both teams combined to go 0-15 on the powerplay.

Cam Brace and Tristan Pomerleau each had two assists for the Varsity Reds.

The Huskies finish fourth at the tournament and will graduate four players this year, while the Varsity Reds finish in the top three at the University Cup for the fourth straight year.

“It’s honestly tough to put into words - it’s one big family right down from the alumni to the current players and past players,” said Huskies captain Kendall McFaull, when asked about playing his last game for Saskatchewan. “It was truly an honour to put on the jersey.”

Player of the game: