It’s a time-honoured Canadian tradition around the holidays: supporting Team Canada in the IIHF World Junior Hockey Championship. From fan to star forward, Canadians across the country celebrate the tournament from Boxing Day into the New Year.

For U SPORTS All-Star teammates Jason Fram and Cain Franson, the tournament also marks the time of year when they get to put their skills to the test against Canada’s up-and-comers in the annual All-Star Series.

“It …opens your eyes a bit to the talent level that some of these (junior) kids have. I think playing in the Western (Hockey) League before, (I) played against some of these kids growing up … a lot of us know a lot of guys who have played on that team,” says Fram, the third-year Alberta Golden Bears blueliner and reigning U SPORTS Defenceman of the Year. “For me personally, I have (Winnipeg Jets forward) Nick Petan and Curtis Lazar (of the Calgary Flames who) are my age that made that team when we were growing up. Now, you get on the same ice surface as a whole team like that, and it’s a bit of eye-opener just knowing how talented all of these kids are. I think it makes you appreciate where you are a little bit more and (it) makes us work a lot harder.”

This year, the duo will provide a veteran presence on the roster, having been selected to the U SPORTS All-Stars for the second consecutive year. Last year, both players played key roles, with Fram recording three points in the two-game series – capped off by the winning tally with 6.5 seconds remaining in the second contest. The goal clinched back-to-back victories for U SPORTS over the World Junior prospects for the first time. 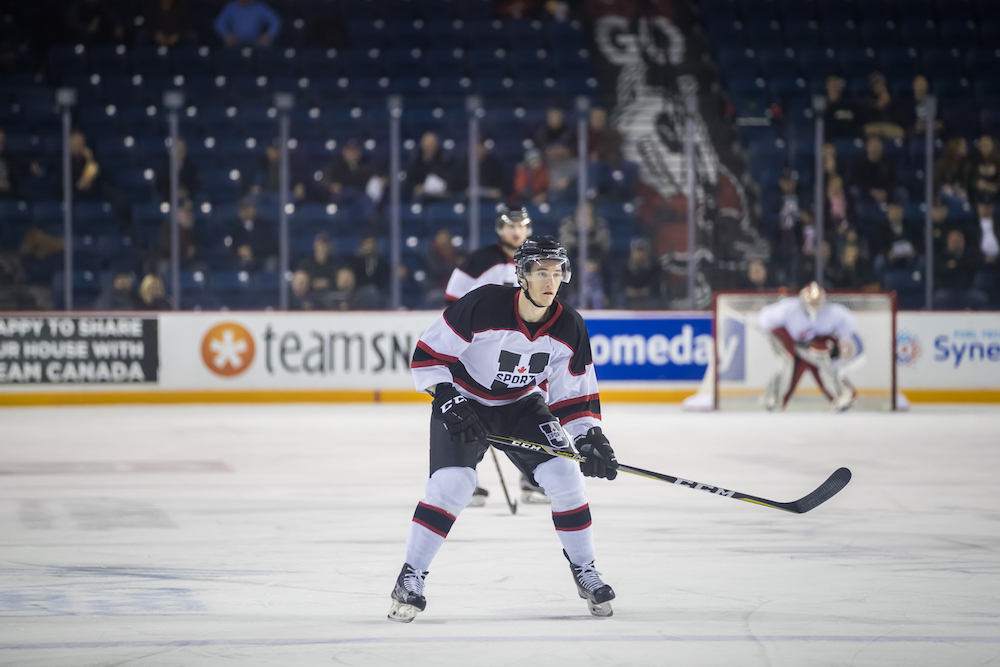 I feel like every year it’s just getting bigger, the entire series itself. The hockey is just continuously growing.

This year, the series is equally as exciting for both of them and they are looking forward to helping prepare Team Canada to defend last year’s gold medal.

“I feel like every year it’s just getting bigger, the entire series itself,” says Franson, a fifth-year forward for the Calgary Dinos. “The hockey is just continuously growing.”

This time around comes with the added bonus of showcasing themselves in front of familiar surroundings, with both players hailing from British Columbia – this year’s host of the World Junior tournament in Vancouver and Victoria. As many hockey players do, Fram and Franson have memories of growing up and watching the event – an aspect of the All-Star Series that isn’t lost on either of them.

“I remember that one year (in 2007), when they played the U.S. and they went into a shootout and it just kept going and going,” says Fram, a native of the Vancouver suburb of Delta, B.C., recalling the performance of current Chicago Blackhawks star Jonathan Toews, who scored three times in the skills competition. “That’s probably the most vivid memory for me.”

It’s not just a team that’s being formed in your division, it’s all of the universities across Canada, so it’s a big honour, a big accomplishment.

For Franson, that 2007 team holds even more significance: his older brother and former NHLer player Cody Franson was on the roster.

“I was 13 or 14 when he was playing in it so I was pretty young,” says Franson. “But I remember my family getting around and watching all the games...It was over in Sweden, so it was an experience and memory I’ve always kind of held onto because it was something pretty cool that was going on in that time of my life.”

His brother’s own successes on that World Junior roster are memories that follow Franson into the All-Star series each year. In particular, he remembers the time his brother nearly found the back of the net.

“It looked like he had scored, (but) actually he ended up getting an assist,” says Franson, who like his older brother, played for the WHL’s Vancouver Giants for his entire major junior career. “He took a shot from the point and it got deflected and I remember my house just erupted…In our little town of Sicamous, B.C., there (were) like probably close to 100 people over at my house, so it was a pretty big event.” 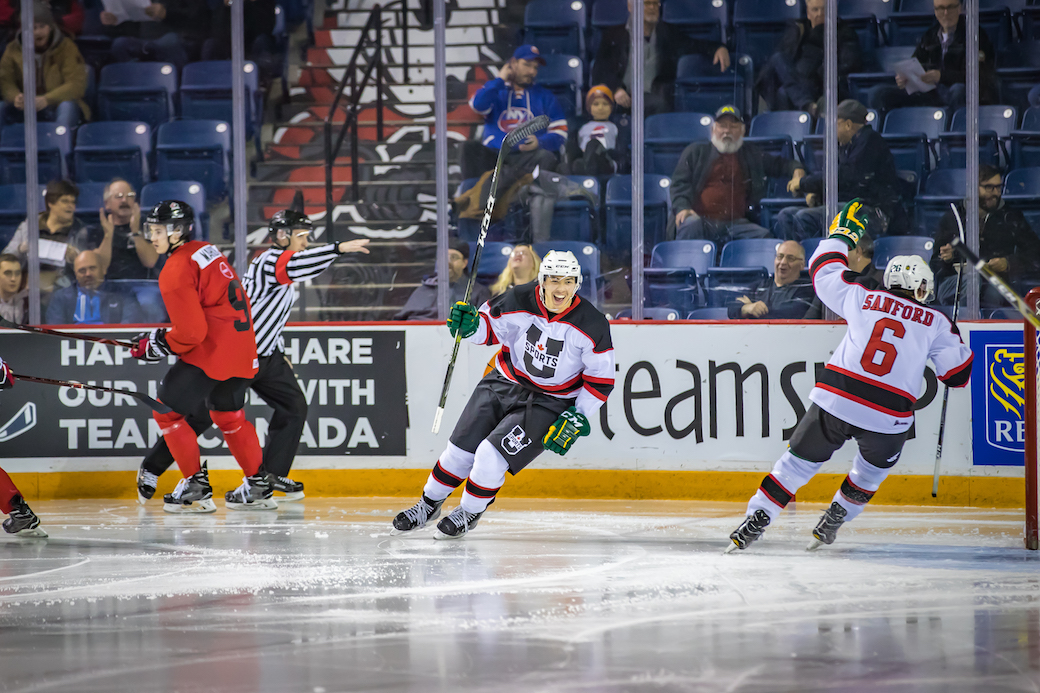 Now, both in their early 20s, the opportunity to play against the next generation of Fransons, Toews and Crosbys isn’t lost on either student-athlete.

...being able to have my parents come and watch something like this, it means a lot to me and I know it’ll mean a lot to them.

What’s more, being able to team up with the rest of the nation’s best at the U SPORTS level, in their home province, makes it that much sweeter.

“It’s not just a team that’s being formed in your division, it’s all of the universities across Canada, so it’s a big honour, a big accomplishment,” Franson says. “But…it’s an experience that not a lot of people get to endure, so I'm planning on taking advantage of it and learning as much as I can.”

Though there are five other returning players to the All-Star roster this year – including Coldstream, B.C., native and Alberta forward Cole Sanford who recorded four points last December, as well as StFX’s Holden Cook who is participating for the third straight year – there are other new recruits they look forward to playing with as well. Franson pointed to the University of Saskatchewan’s Kohl Bauml, Carson Stadnyk and Collin Shirley as a trio he has seen throughout the season and enjoyed watching.

With the series being played in Victoria this year, both are expecting some of their closest supporters to be in attendance. For Franson, he’s hoping some of his friends from home make it to the games. For Fram, it’s a chance for his family to catch him in action — something they weren’t able to do last year, when the event was hosted in St. Catharines, Ont.

“Obviously you don’t always get to play a lot of these kinds of games in places that are close to home. I know last year, my parents wanted to come out but it was a bit of a trek and they weren’t able to. So just personally, for me, being able to have my parents come and watch something like this, it means a lot to me and I know it’ll mean a lot to them.”