One year after their first-ever national title, the Ottawa Gee-Gees are tournament favourites heading into the 2018 U SPORTS Women’s Rugby Championship after holding the pole position in the Top 10 for the entire season.

The 2018 U SPORTS Women’s Rugby Championship, hosted for the first time by Acadia University, kicks off on Thursday at Raymond Field and concludes next Sunday with the gold-medal final at 4:30 p.m. ET / 1:30 p.m. PT. Live-streaming is available on USPORTS.LIVE. 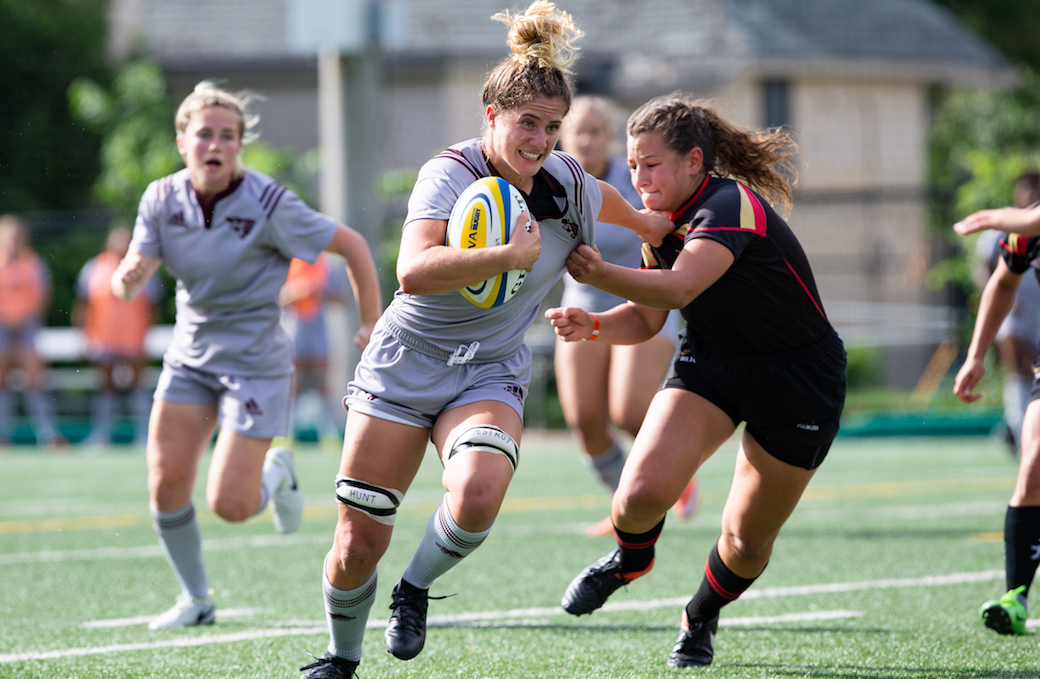 Defending a national title can be a daunting task, however the 2018 Ottawa Gee-Gees women’s rugby team is unbothered by lofty expectations. Powering through their exhibition and regular season schedule, the Garnet and Grey have racked up wins against nationally-ranked Laval, Carleton, and StFX, en route to a fifth-consecutive undefeated RSEQ regular season.

The Gee-Gees boast an eye-popping nine RSEQ all-stars, as well as the conference’s Rookie of the Year, Claire Gallagher. Despite sporting a roster peppered with provincial and national team talent, the scariest fact about this Gee-Gees team is their depth. With a dominant pack, the Gee-Gees have great strength in the scrum led by props Maya Montiel and Ellen Murphy. For their opponents speed also kills, with 2017 All-Canadian backs Sam Alli and Alex Ondo on the wings. Emily Gray, the team’s fly-half is a do-it-all force for the Gee-Gees, a powerful runner, stiff defender, and precise kicker that racks up points for the team. 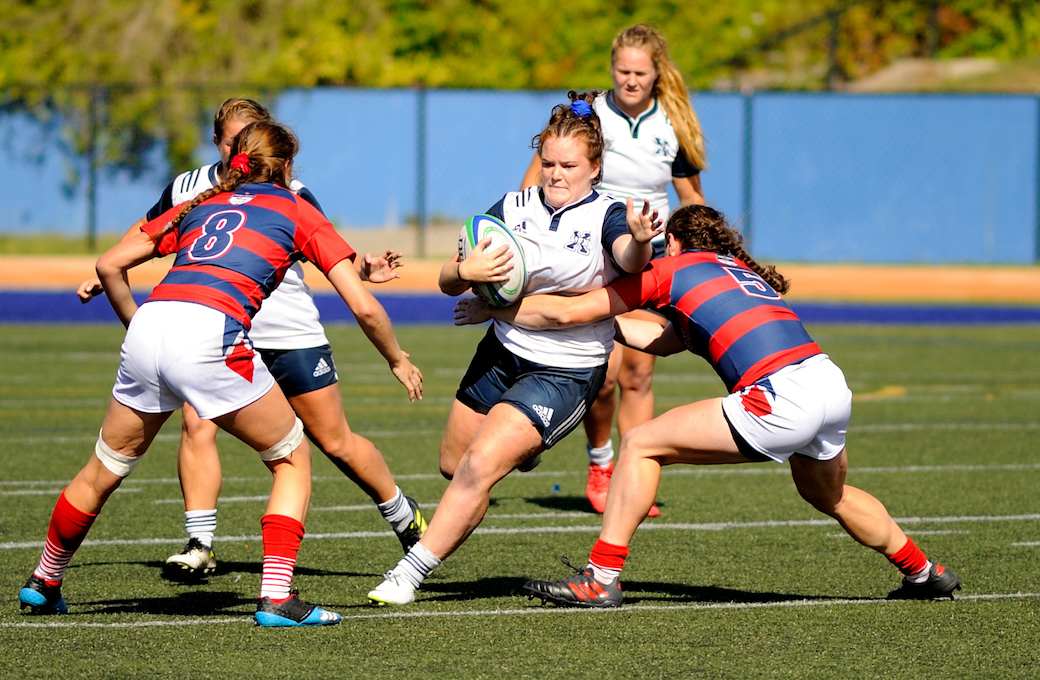 The StFX X-Women are the defending AUS champions and have captured the conference banner 19 out of the past 20 years. They also have five national titles to their claim, winning in 2006, 2010, 2012, 2014 and 2016, while finishing as bronze medalists last season. The X-Women were led by a pair of veteran fifth-year veterans in prop Joanna Alphonso (three-time U SPORTS All-Canadian and AUS MVP) and No. 8 Olivia DeMerchant, a Canadian 15’s national team member who returned for her fifth season after graduating from StFX in 2013. Fifth year scrum half Alison Blanchard and points leader Danielle Franada at fly half, along with U20 national team member senior flanker Amelia Hatfield also played key roles this season. The X-Women had a well-balanced scoring attack with threats from all positions including speedy backs Sarah Hoerig and Sophia Parker. 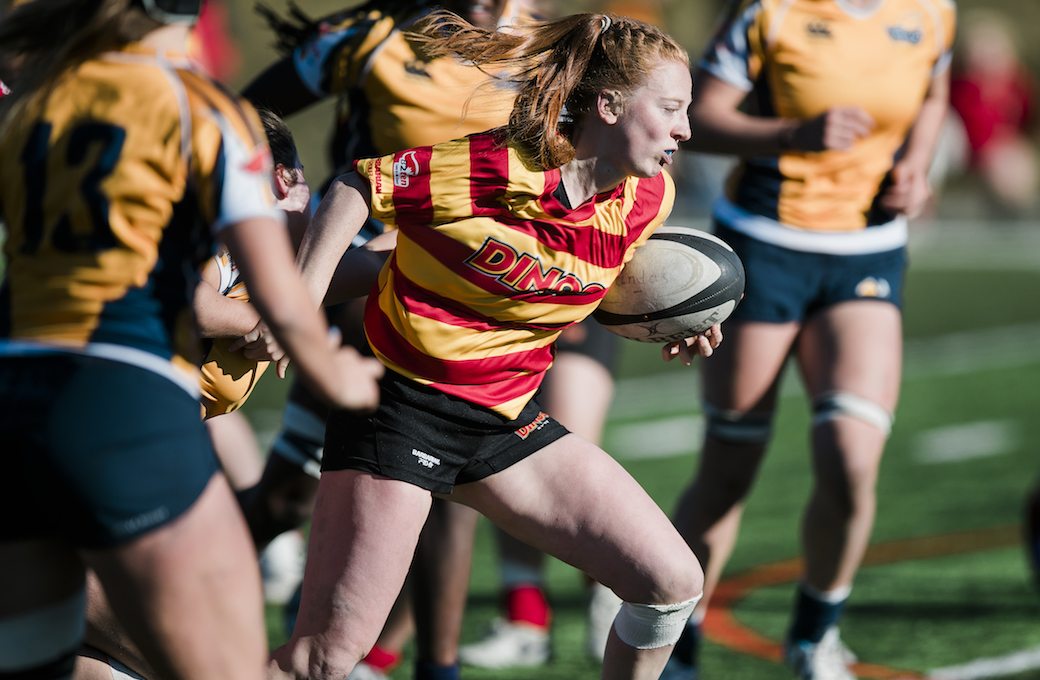 The Calgary Dinos make their third straight appearance at the U SPORTS national championship, looking for the first banner in the 10-year-old program’s history.

Calgary extended its dominance of Canada West in 2018, capturing a third consecutive conference title after completing a 20-game unbeaten streak against Canada West opponents. That streak came to an end in the Dinos’ only loss of the season, a 23-15 setback at Lethbridge in their final game of the regular season. They bounced back nicely, though, defeating Alberta in the semifinal followed by a 27-8 win over Victoria in the title game.

A young team that lost plenty of veteran leadership after their 2017 season, the Dinos were led once again by a Menin. Kasselle, the youngest of three Menin sisters to have played for the Dinos, followed in her sister DaLeaka’s footsteps as the Canada West Player of the Year. Taejah Thompson accounted a total of 45 points in the regular season, crowning her as the conference scoring leader, while Isla Shill scored 33 and Menin added 25. 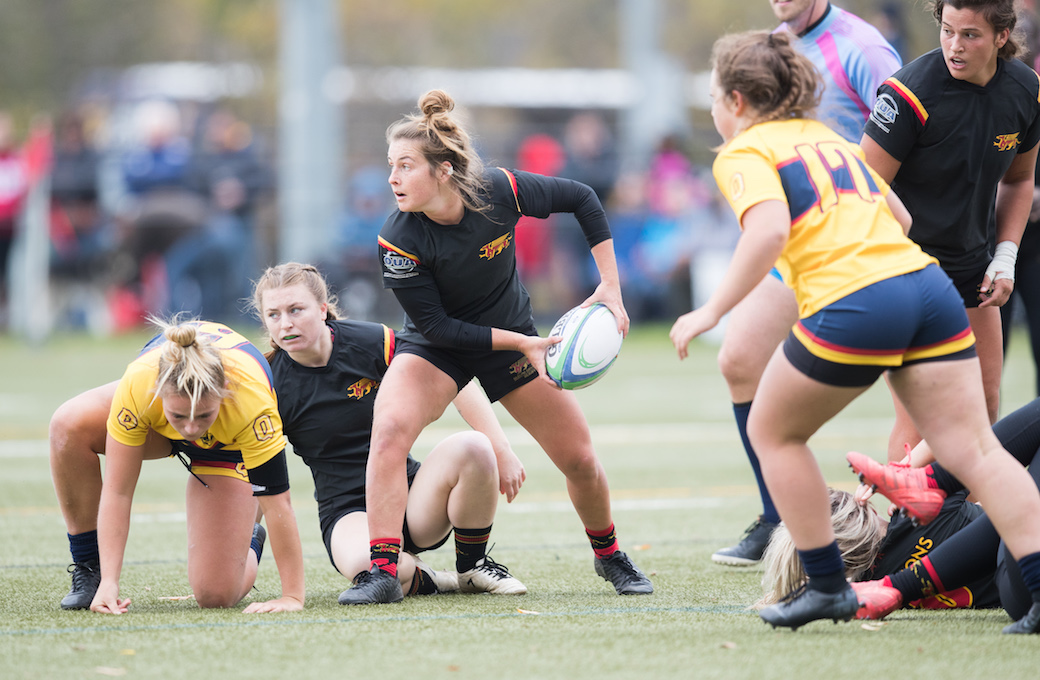 The Gryphons added another chapter to the program’s storied history with a 39-14 win over the Queen’s Gaels in the OUA Championship on Oct. 20. That victory completed a three-peat, which was also marked the eighth provincial banner in the past 11 years, and 16th overall in the quarter century of OUA women’s rugby.

Guelph once again ran the table and finished the regular season unbeaten atop the Shiels Division. The Gryphons did it by overwhelming OUA opponents with a blend of creative, ever-evolving offence and the defensive grit that has also become a trademark of the side. The multi-dimensional approach was on full display in the OUA postseason. The two-time defending champions traded tries early with the Russell Division-leading Brock Badgers in the OUA semifinal before running away to a one-sided 97-12 win. The dominance continued in the final and while Guelph squandered a couple opportunities early against Queen’s, they built momentum and scored the first 29 points of the match to secure a third straight title. 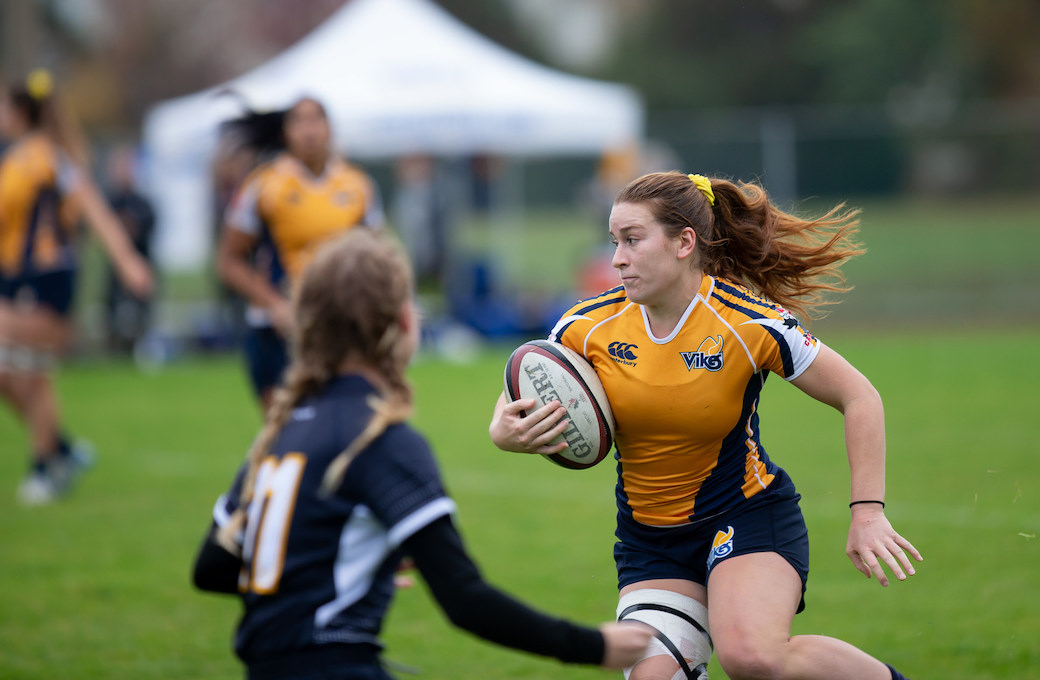 The Victoria Vikes women’s rugby team wrapped up their Canada West season as the conference silver medallists for the third-straight year. The Vikes have not hoisted the conference banner since head coach Brittany Waters’ inaugural year in 2015 but are set to return to the national championships for their fourth appearance in program history. The 2018 season was a roller coaster for the team that were plagued with injuries to key players from the start of their season.

The Vikes were 3-2 in regular season play and were led in scoring by centre and fourth year Maddy Aberg with 27 points and eight converts. The team is bolstered with talent including fifth-year Canada West All-Star Gurp Dhaliwal and Canadian 15s national team member Paige Farries, also named a 2018 Canada West All-Star.  The team’s depth also includes the talents of fourth-year Vike Chanelle Edwards-Challenger, also a member of Canada’s 15s program, second years Renee Gonzalez and Sasha Guedes, as well as first year McKenzie Pusch. The team booked their return to the national championship after a convincing 26-0 semifinal win over the T-Birds. 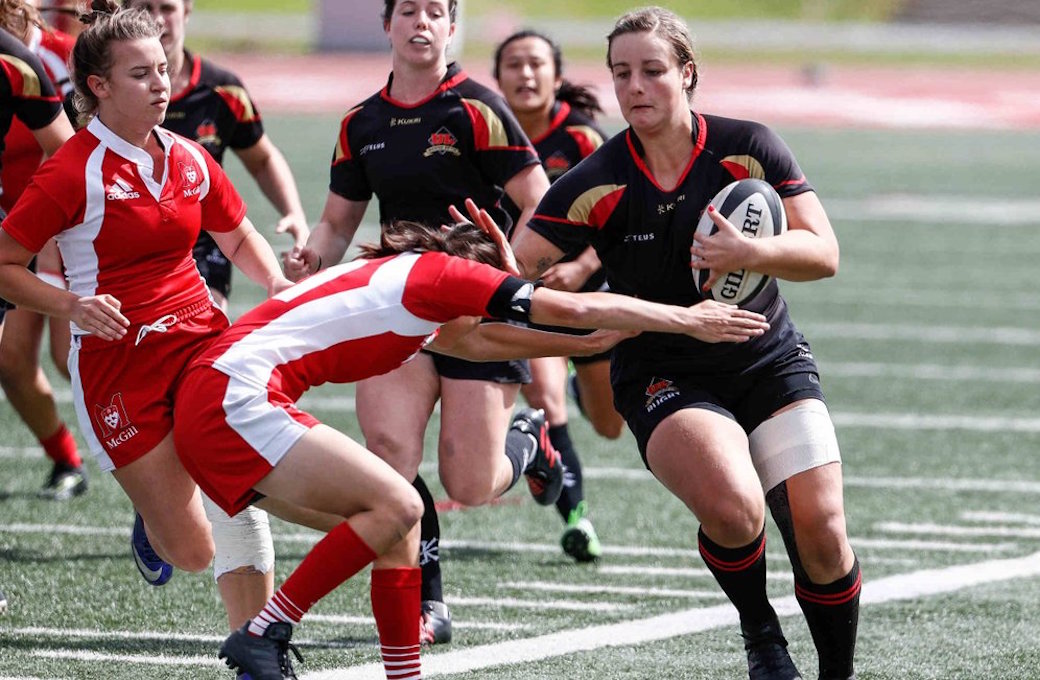 After suffering a setback in their season opener against the reigning national champion Ottawa Gee-Gees, the Laval Rouge et Or outshot their opponents, winning six straight games to finish in second place with a record of 6-1. Fifth-year veteran Laurie Houle led the charge, finishing third in the RSEQ with 10 tries, while Véronique Gagné had 74 points, ranking second overall in the conference and being named Player of the Match three times during the season. This is the second consecutive appearance at the U SPORTS Championship for the Rouge et Or, who won the silver medal in 2017, the best result in the program's history. 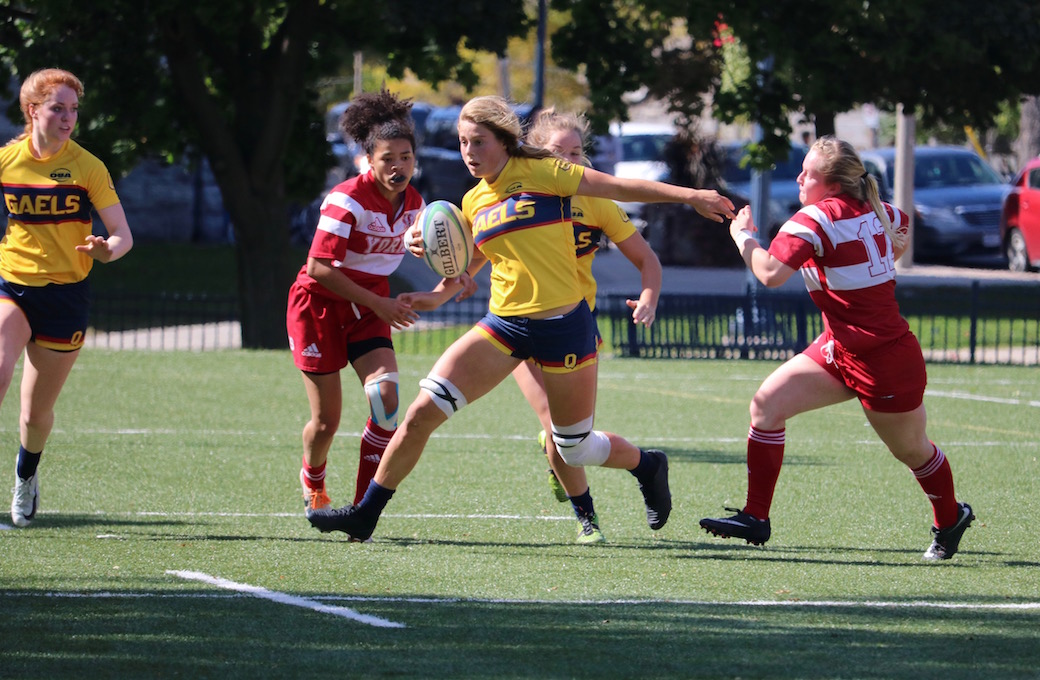 The Gaels are coming off a 2017 U SPORTS championship appearance and OUA silver medal and had their sights set on the conference and national titles once again.

Queen’s went 3-1 during the regular season, beating Western (68-10), McMaster (34-14) and York (90-5), while only falling to eventual conference champion Guelph (39-34). The Gaels also swept an exhibition series against the No.2-nationally ranked StFX X-Women in preparation for the playoffs.  In the post-season, Queen’s was able to stay in front late and take a 29-24 win over McMaster, setting up a rematch of the 2017 OUA final with Guelph, where they eventually fell 39-14. Conference all-star Nadia Popov and OUA MVP Sophie de Goede were able to put down tries for the Gaels who came away from the match with OUA silver. 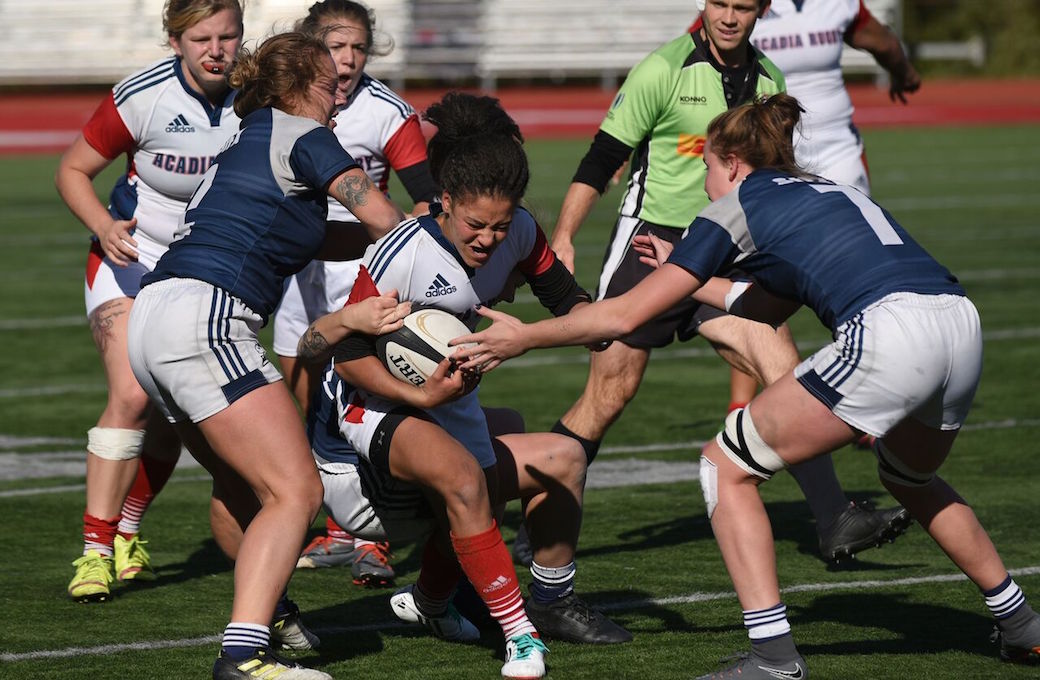 As host of this year's national championship, the Axewomen had an automatic berth to the championship tournament, leaving the season’s focus on a conference championship that has alluded them since the 2015 season – the only time a team other than StFX had captured the title.

With the return of several key veterans from the 2015 AUS championship team along with seniors from a strong 2017 squad, the Axewomen went 4-2 on the season – sweeping a pair of matchups against both Saint Mary’s and UPEI, while dropping both matchups against the rival X-Women – including the regular season finale. A missed conversion on the last play of the game gave the X-Women a 22-20 win and first place in the AUS standings.