The StFX X-Women made their final match of the 2018 season one of their best, scoring a convincing 41-24 victory over Guelph in the championship game of the U SPORTS Women's Rugby Championship on Sunday .

The national championship was the fifth in nine seasons for StFX – winning every other year beginning in 2010 – and the sixth national crown overall for the X-Women who also won the national title in 2006.

StFX turned in a total team effort, led as usual by their impressive group of forwards.

Fifth-year senior Joanna Alphonso made her final appearance in StFX blue and white one of the best of her five-year career, and Windsor, N.S., native Sam Lake led the way offensively with three tries and also turned in a yeoman effort on defence.

Guelph, one of the positive stories of the tournament after wins over Victoria and defending champion Ottawa, started strong and opened the scoring on a Julia Schell try just 1:44 into the game. Madison Brattan added the conversion for a 7-0 Guelph lead.

StFX responded in kind, with Alphonso pushing across a try at the 6:21 mark. Danielle Franada, virtually automatic on conversions all tournament long, tied the score 7-7.

Again, it was Guelph that grabbed the advantage, with Erika Barton scoring a try at 16:59. Again, Brattan was good on the conversion, and Guelph led 14-7.

The X-Women again stormed back, tying the score 14-14 on an Olivia DeMerchant try at 24:32 and another successful conversion by Franada.

The crowd held its breath, waiting to see which of the two talented teams would manage to blink first. As it turned out, it was Guelph.

Amelia Hatfield gave StFX the advantage, for good as it turned out, with a try at 37:46, and although Franada's conversion attempt failed, the X-Women went to the locker room at halftime with a 19-14 lead.

It figured the team that scored first in the second half would grab a sizeable advantage, and thanks to Lake, that team was StFX.

The fourth-year prop scored the first of what would end up being three second-half tries at 42:48. Franada, back to her usual accuracy, made the conversion for a 26-14 StFX lead.

Guelph, though, was not finished, nor were the Gryphons prepared to concede the decision to StFX quite yet. Rebecka Sundell scored a try for Guelph at 48:19, and after Brattan was good on the conversion, the Gryphons were back to within 26-19.

The X-women, though, were not to be denied on this occasion. Lake pushed across her second try at 55:53, and Franada's conversion increased the StFX lead to 33-19. Thirteen minutes later, at 68:02, a Franada penalty kick pretty much iced the contest, increasing the StFX lead to 36-19.

Still, the scoring - and the excitement -wasn't over. Brodie Schmidt scored Guelph's fourth try of the game at 72:05, and though the conversion attempt failed, the Gryphons pulled to within 36-24. 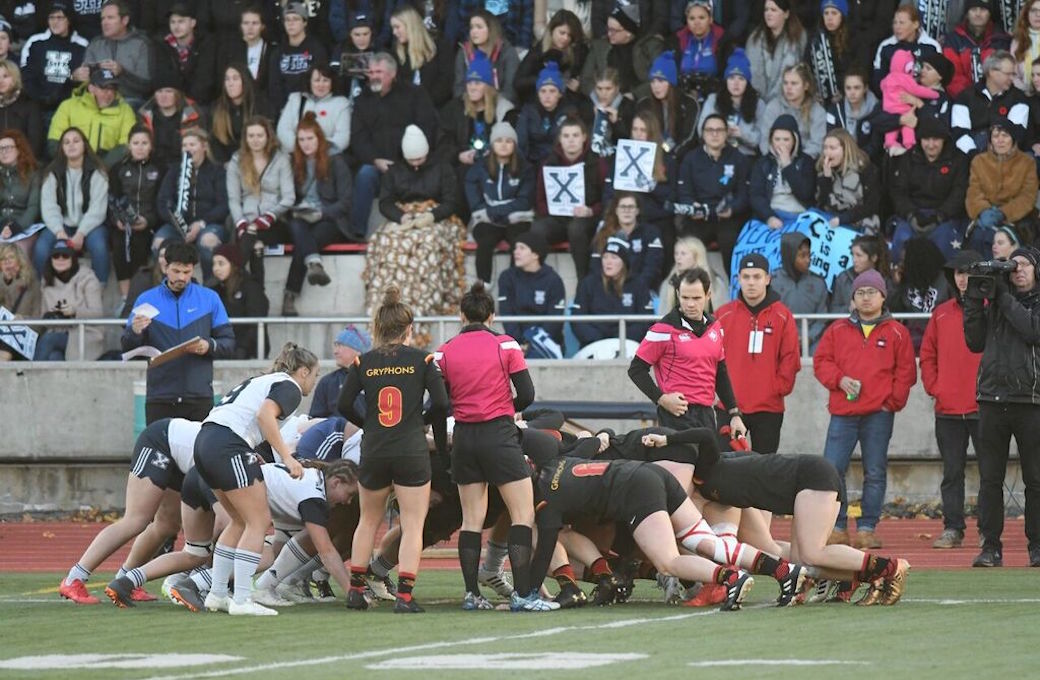 In the end, though, it was just too much StFX for the plucky Gryphons – and for everyone else in the tournament, in fact. Lake brought the capacity and highly partisan crowd to their feet with her third try of the game, at 81:04, making the final score 41-24 in favour of the X-Women.

Both teams, and in particular the victorious X-Women, had many candidates for Player of the Game, but Hatfield for StFX and Kylie Shaughnessy for Guelph took home the honours.

“It feels amazing. It's surreal. It's my second time being here with the team and we have come so far in the past month and we have peaked at just the right time,” said Hatfield after the game. “Credit to Guelph, they played an amazing game. (At the beginning of the game) we were thinking, we let them score on us and we have been down before and we can get back up.”