In the U SPORTS women’s rugby bronze medal game, the host Ottawa Gee-Gees defeated the Guelph Gryphons by a score of 33-17 at Matt Anthony Field. The victory marked the fifth consecutive U SPORTS medal for Ottawa.

Both teams were looking to end the championship on a high note after dropping hard-fought and emotionally draining semifinal games on Friday. 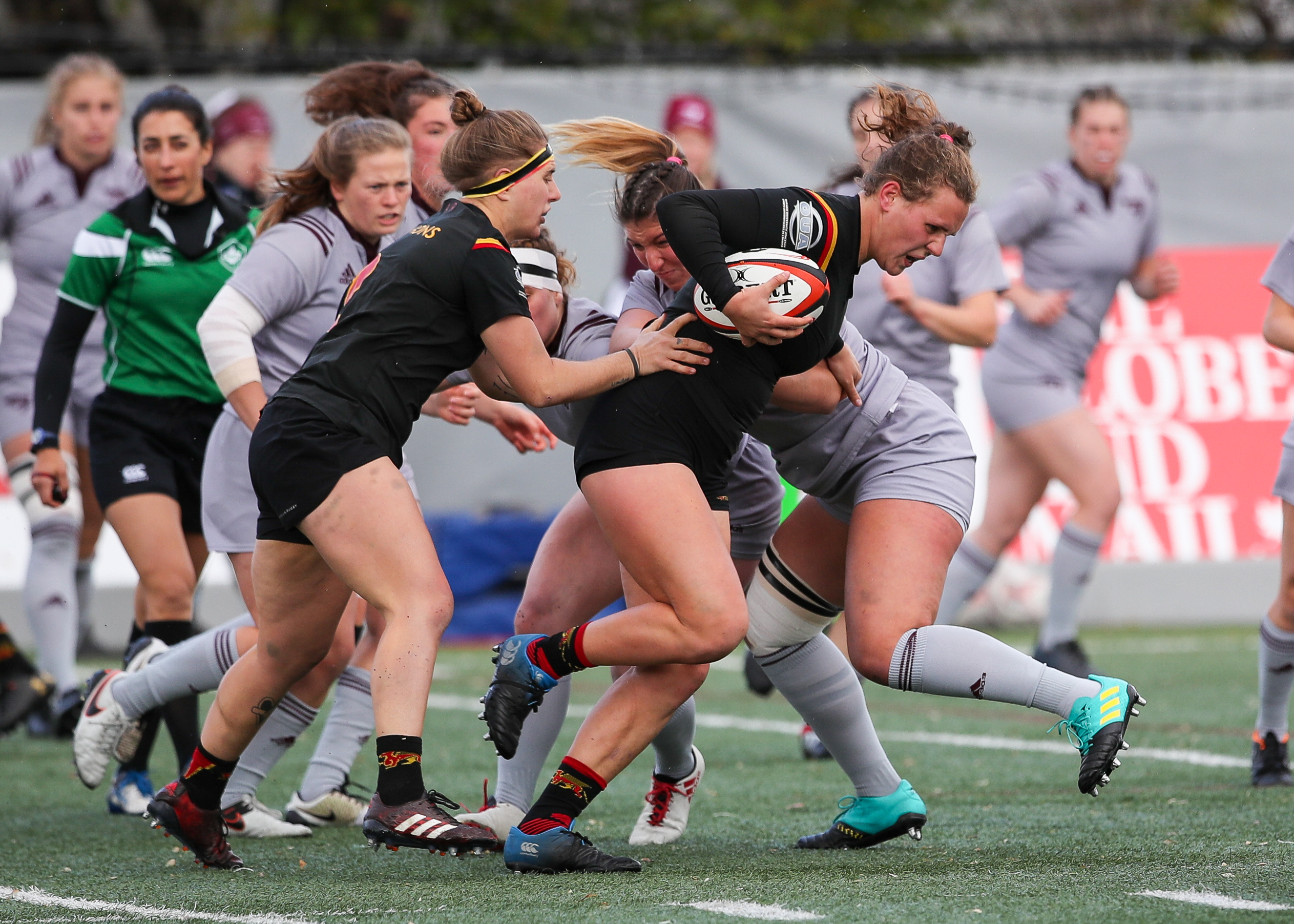 A light rain started to fall at the first whistle and the Gee-Gees came out firing early. Aggressive defence from the kick-off gave Ottawa a scrum in Guelph territory. A perfectly executed sweep play from Madison Grant across and through the Gryphons defence pushed the Gryphons to the brink. Off the ruck, Gee-Gees leading scorer Michaela Haley dragged a defender hanging off her uniform for the early try.

Great back-and-forth play followed with both teams controlling the ball until great defensive plays would steal it away. 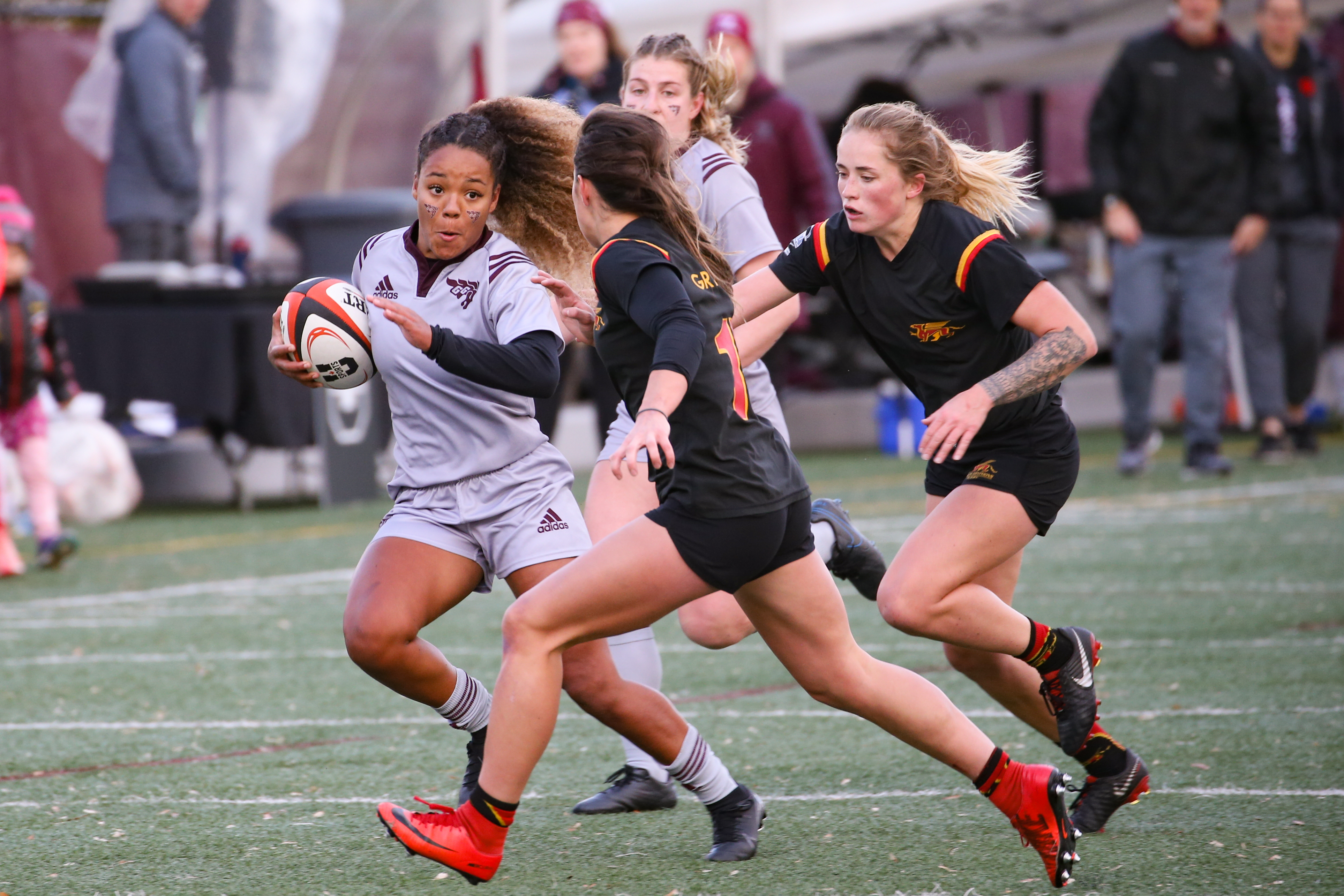 Alexandra Ondo got the ball within 10 yards with a great run for Ottawa before the forwards took over. The Gee-Gees forwards controlled the ball in pods punching their way through the defence, ending with Meredith Sirrs carrying the ball over the try line.

The Gee-Gees kept their foot on the gas when RSEQ Rookie of the Year Madison Grant scooped the ball out of the scrum and dove for the try.

With the ball still in play at the end of the half, the Gryphons refused to go into halftime without something to show for it. The Gryphons held possession and pushed the Gee-Gees defence back until Talia Hoffman burst through and scored a try on the last play of the half. The Gee-Gees led 19-7 with 40 minutes left to play.

The weather turned for the worse at the start of the half as the players were welcomed back to the field with hail. That didn’t matter to the Gryphons though, as they started the half with purpose.

After recovering their own kickoff, the Gryphons promptly marched the ball down the field with Brodie Schmidt finishing off the pick-and-go to narrow the Ottawa lead. 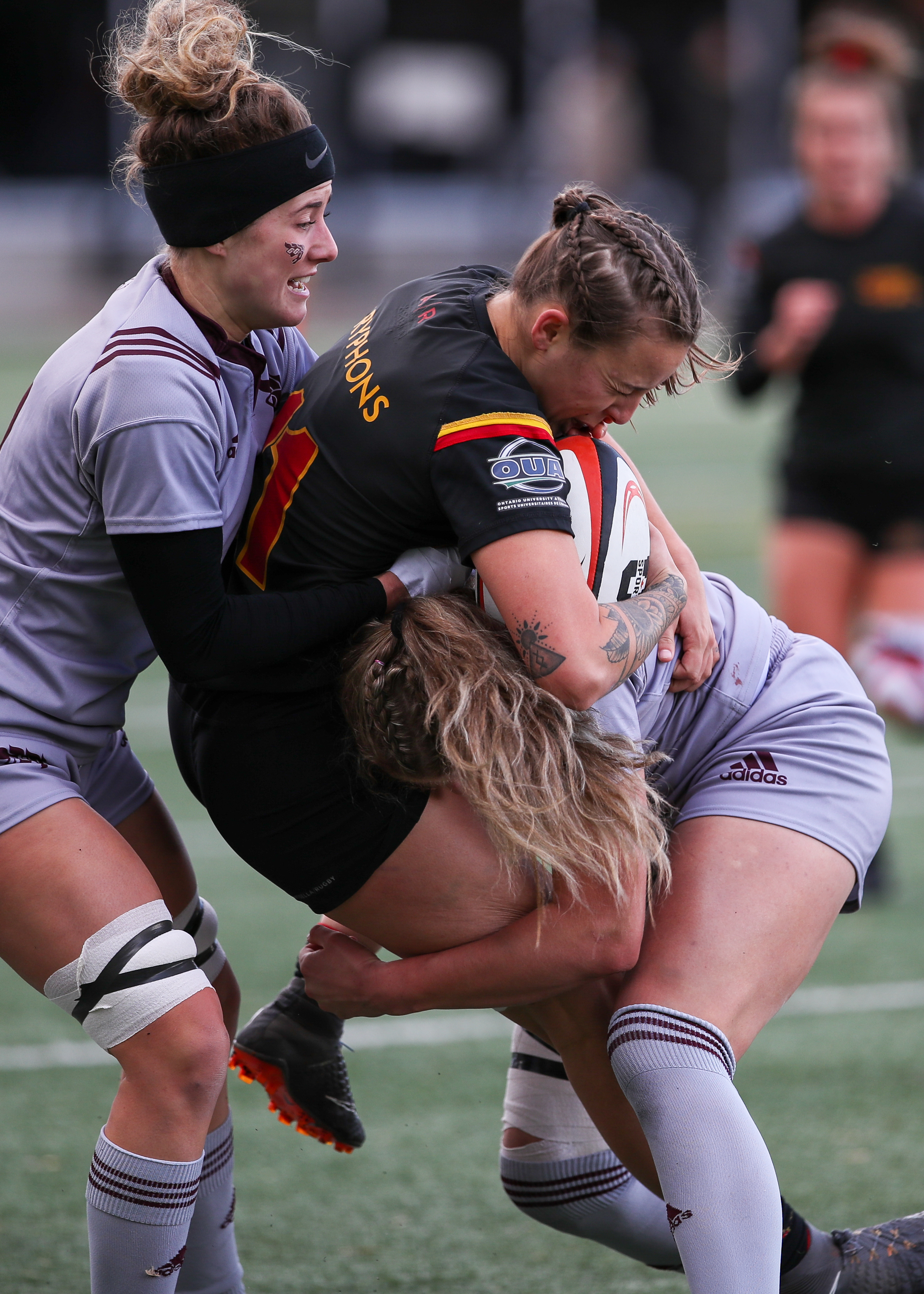 The Gryphons had multiple opportunities to regain possession but struggled with penalties which kept giving the ball back to the Gee-Gees.

The Gryphons were desperate and pushed for the comeback. Cassandra Tuffnail faked a pass out wide and slashed through the Gee-Gees in hopes of cutting into the deficit.

The game would end with the Gryphons still pressing, but the Gee-Gees defence was able to successfully fend off the final attack, and clinch the bronze medal victory. 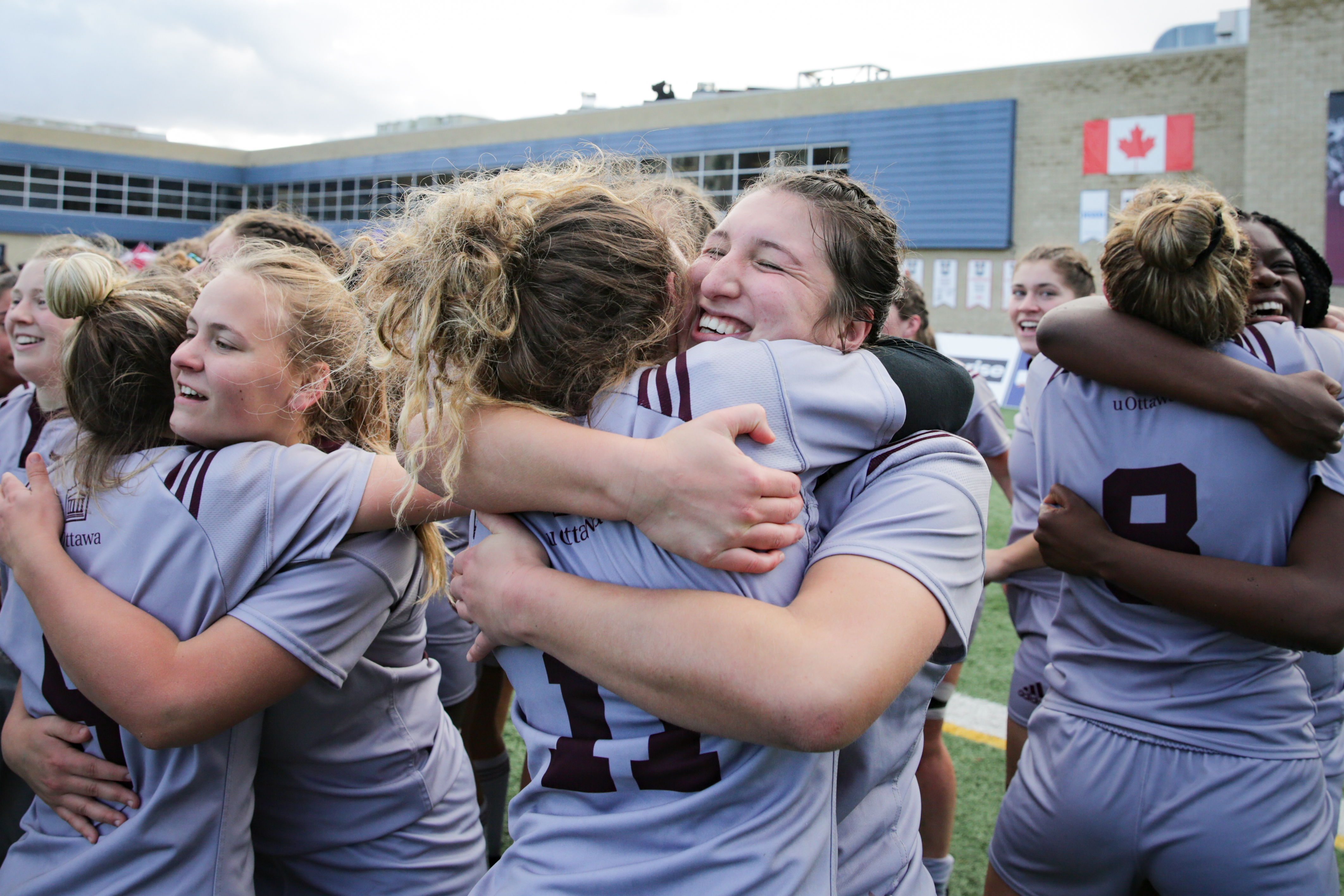 “We made it a little bit difficult for ourselves at the start of the second half. I thought the girls pulled through. We have a really young group, and then we lost one of our fifth-years to injury in the second half,” said Gee-Gees head coach Jen Boyd following the game, in reference to to All-Canadian lock Michaela Haley, who was helped off the field under her own power. “The kids just kept plugging along, I was really, really, proud of their efforts.”

For the Gee-Gees, the victory was even sweeter coming in front of a large contingent of family, friends and supporters cheering them on at their home turf.

“It’s pretty special. To finish the season with the win. We didn’t have a great start, a really atypical regular season,” Boyd said. “The same ending as last year, and then we’ll look to get a different colour next year. We’re going to appreciate and love this one.” 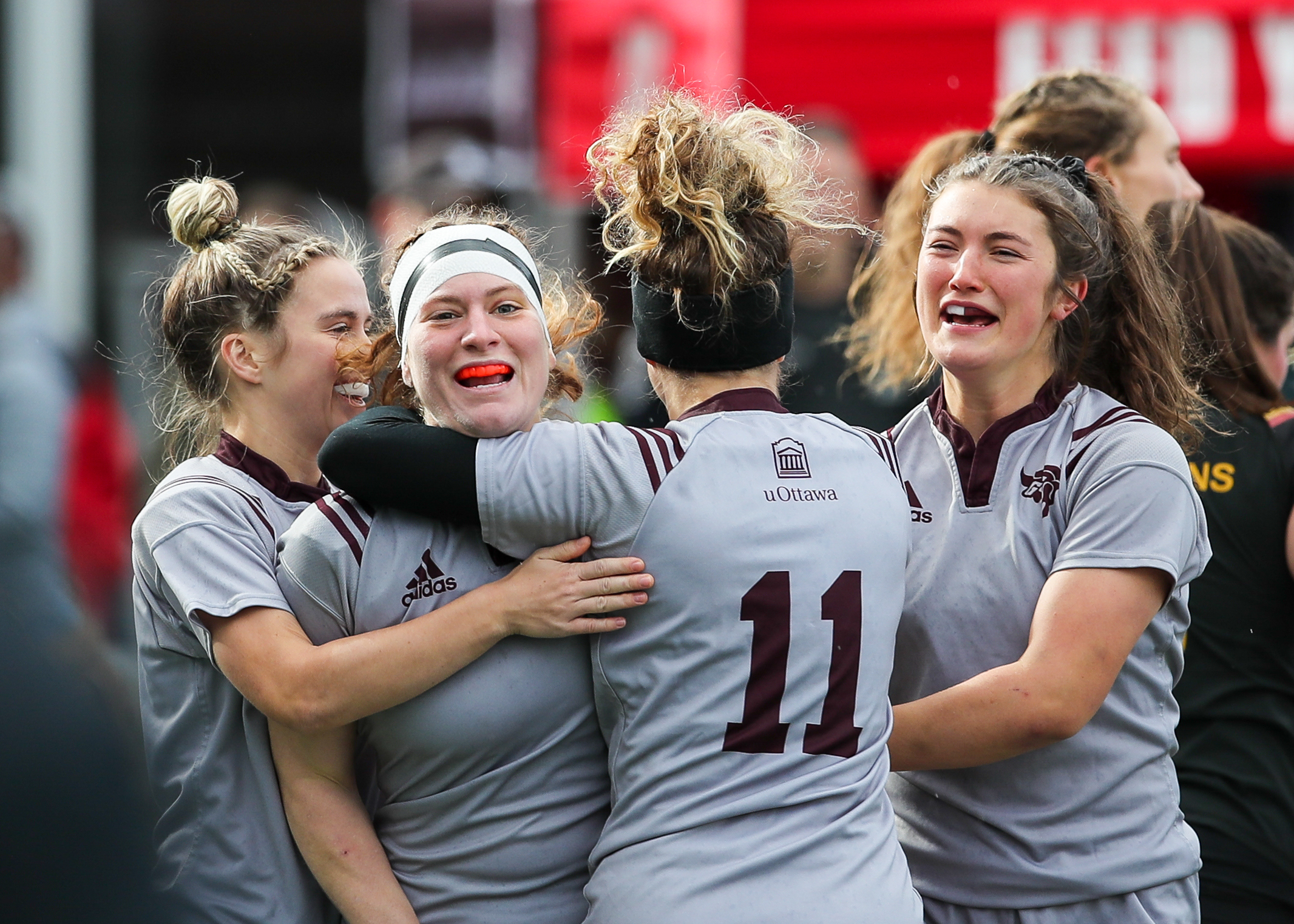 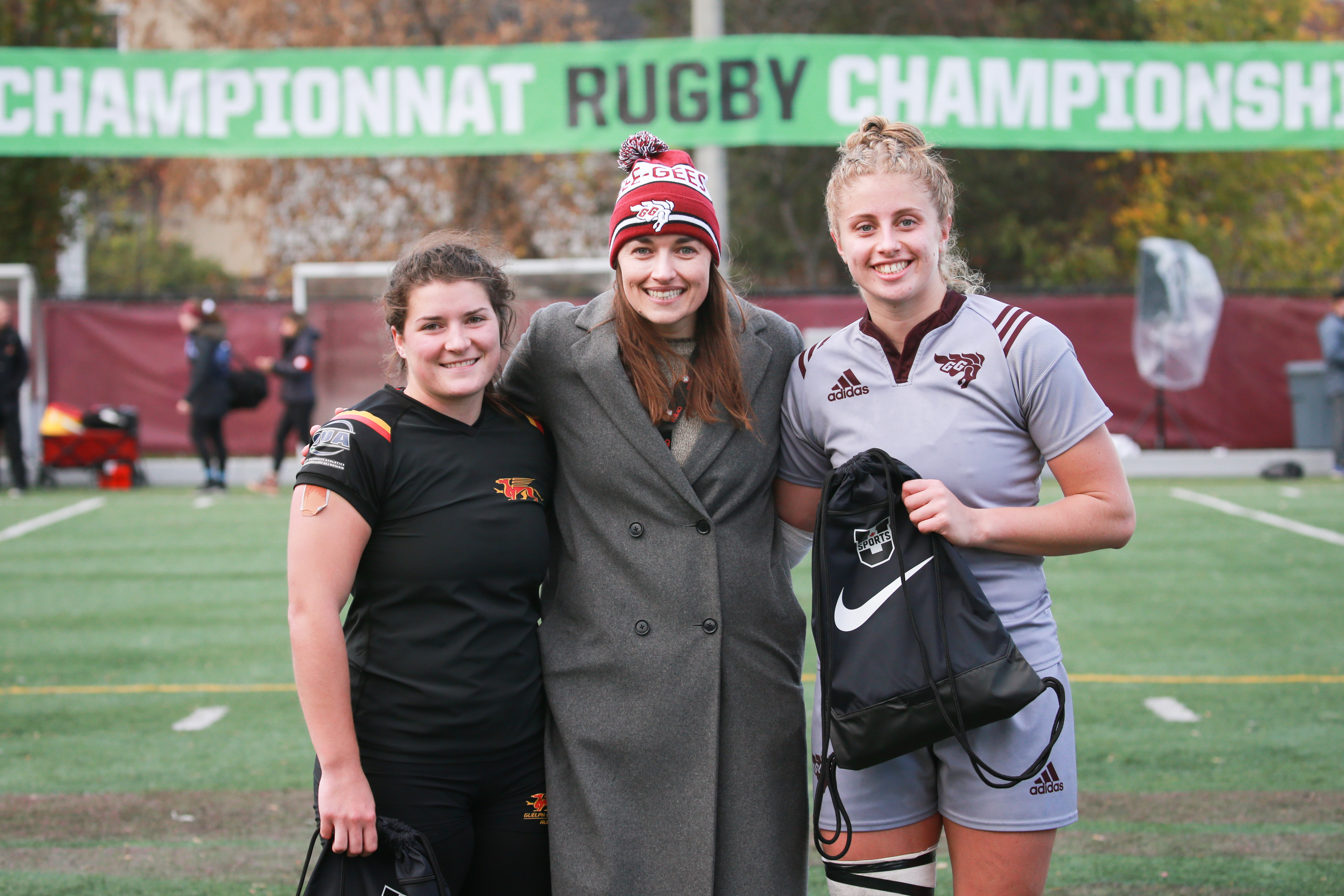