The Gladys Bean Memorial Trophy is headed to a new home this season.

With the 2018 champion Ottawa Gee-Gees eliminated from defending their title, and five new programs qualifying for the national tournament over last year, this edition of the U SPORTS Women’s Soccer Championship promises a more wide open competition than ever before.

The 2019 U SPORTS Women’s Soccer Championship, hosted for the fourth time by the Victoria Vikes, kicks off on Thursday at Centennial Stadium and concludes next Sunday with the gold medal game at 6 p.m. ET / 3 p.m. PT. Livestreaming is available on USPORTS.LIVE. 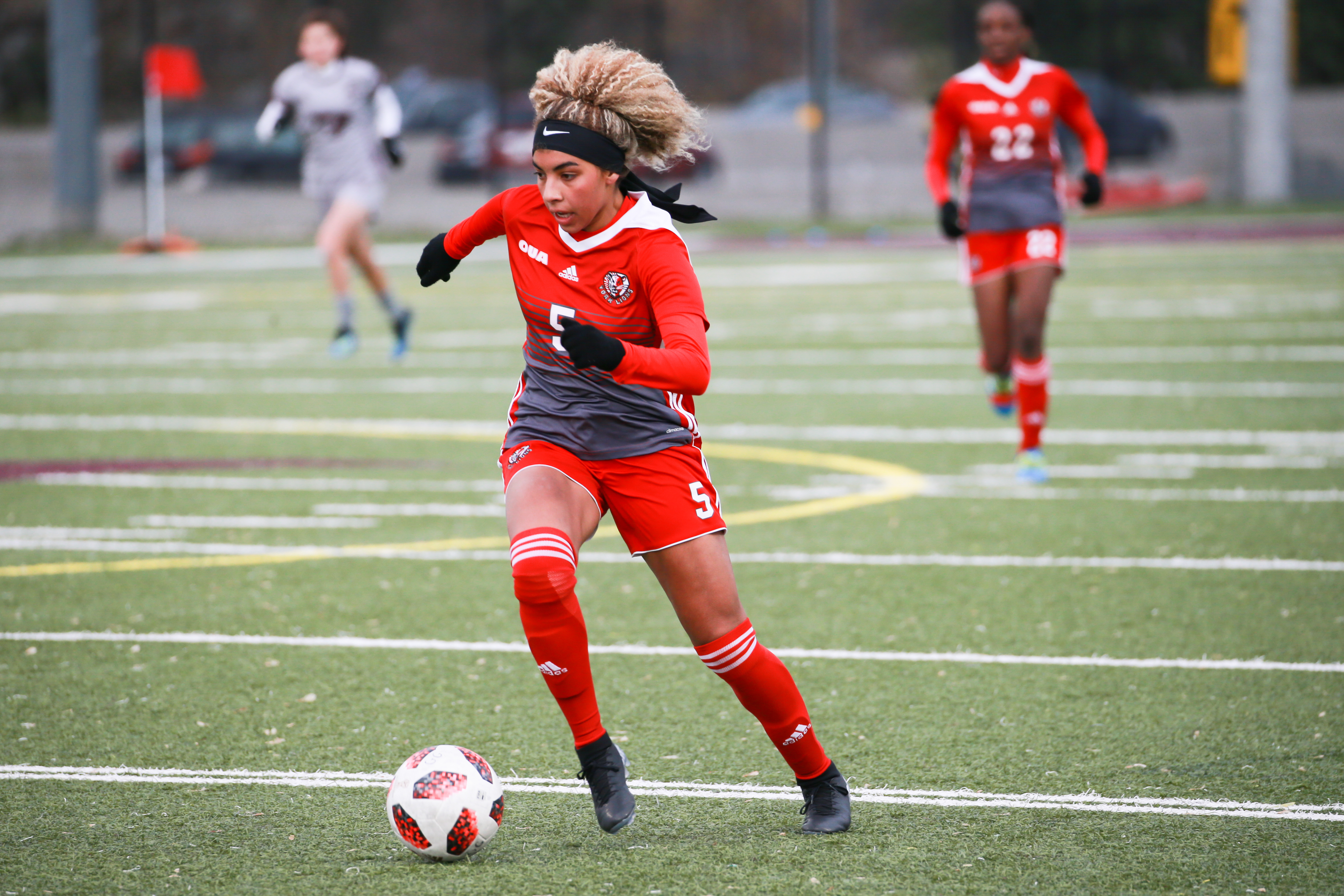 The York Lions have put together an impressive campaign in 2019 and have gotten better as the season has progressed. They opened the year with a narrow 2-1 loss to Guelph but have since been unbeatable. At the end of September their record was a respectable 2-1-4, but as the calendar flipped to October they started winning and haven’t stopped. The Lions won five in a row and six of seven to close the season at 8-1-5, missing out on a first-round bye only because Guelph had the tiebreaker.

Instead, the Lions finished third in the OUA West Division, squeaked out a 1-0 win over Waterloo in the first round of the playoffs and then avenged their one loss by defeating Guelph 1-0 in extra time in the quarter-finals. That victory advanced the Lions to the OUA Final Four for the first time since 2015, where they scored the upset of the year by knocking off No. 1 and previously undefeated Ottawa 3-2 in extra time in the semifinals.

The dream season did not stop there as the Lions defeated the rival Toronto Varsity Blues 2-0 in the final to win their first OUA championship since 2009. 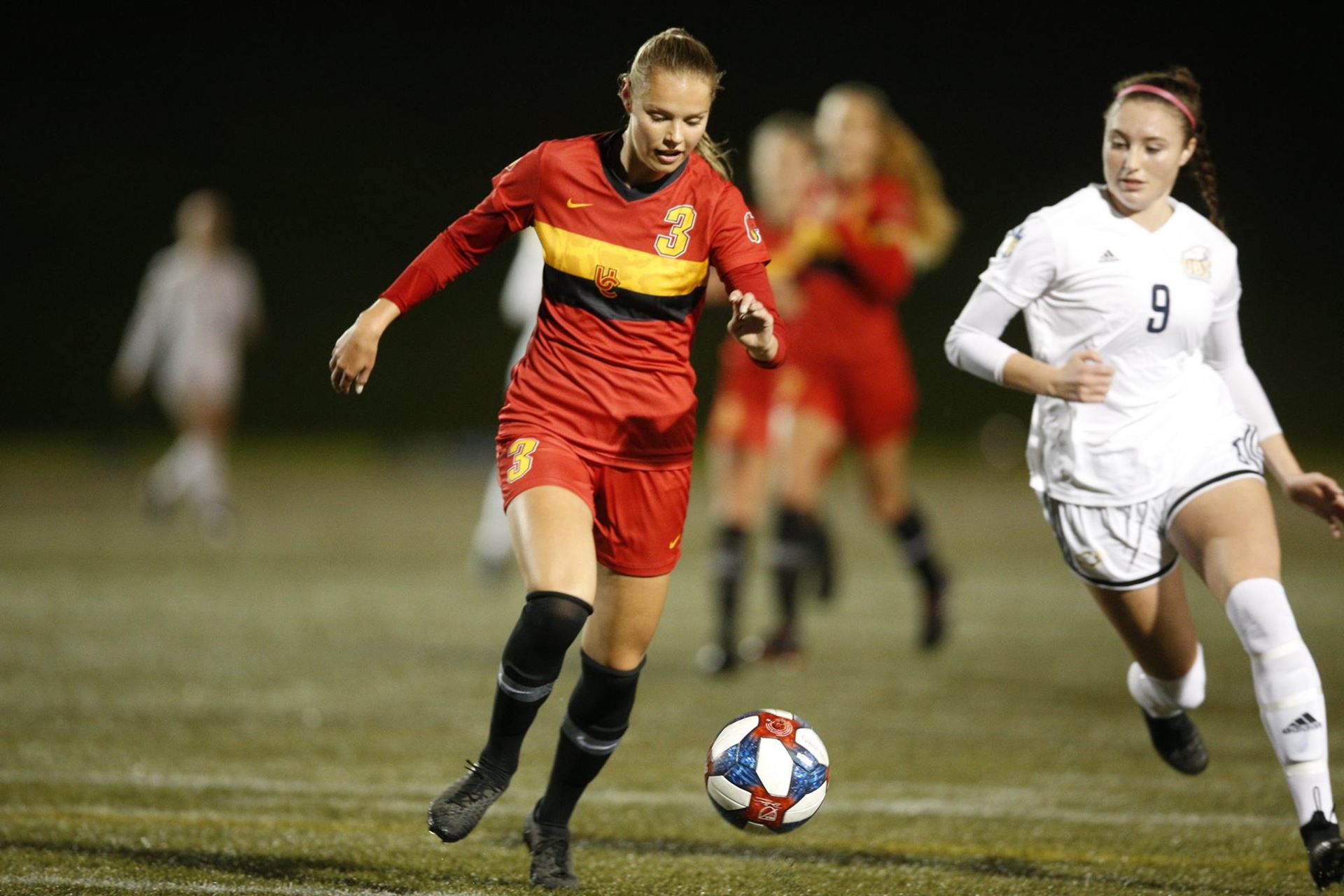 The Dinos lost just once in 2019, finishing second in the Pacific Division with a mark of 10-1-3. Calgary posted a Canada West-best 0.50 goals against average, thanks both to the play of goalkeeper Lauren Haughton, who led the conference in both wins (10) and shutouts (8), and a near-impenetrable defense that allowed just 36 shots on goal over the entire regular season.

In the playoffs, the Dinos beat the Manitoba Bisons 1-0 in the quarterfinals before earning a dramatic 4-3 victory in penalty kicks to eliminate the MacEwan Griffins in the semis and qualify for the national tournament. Calgary then captured its first conference title since 2005 with a 1-0 win over UBC. 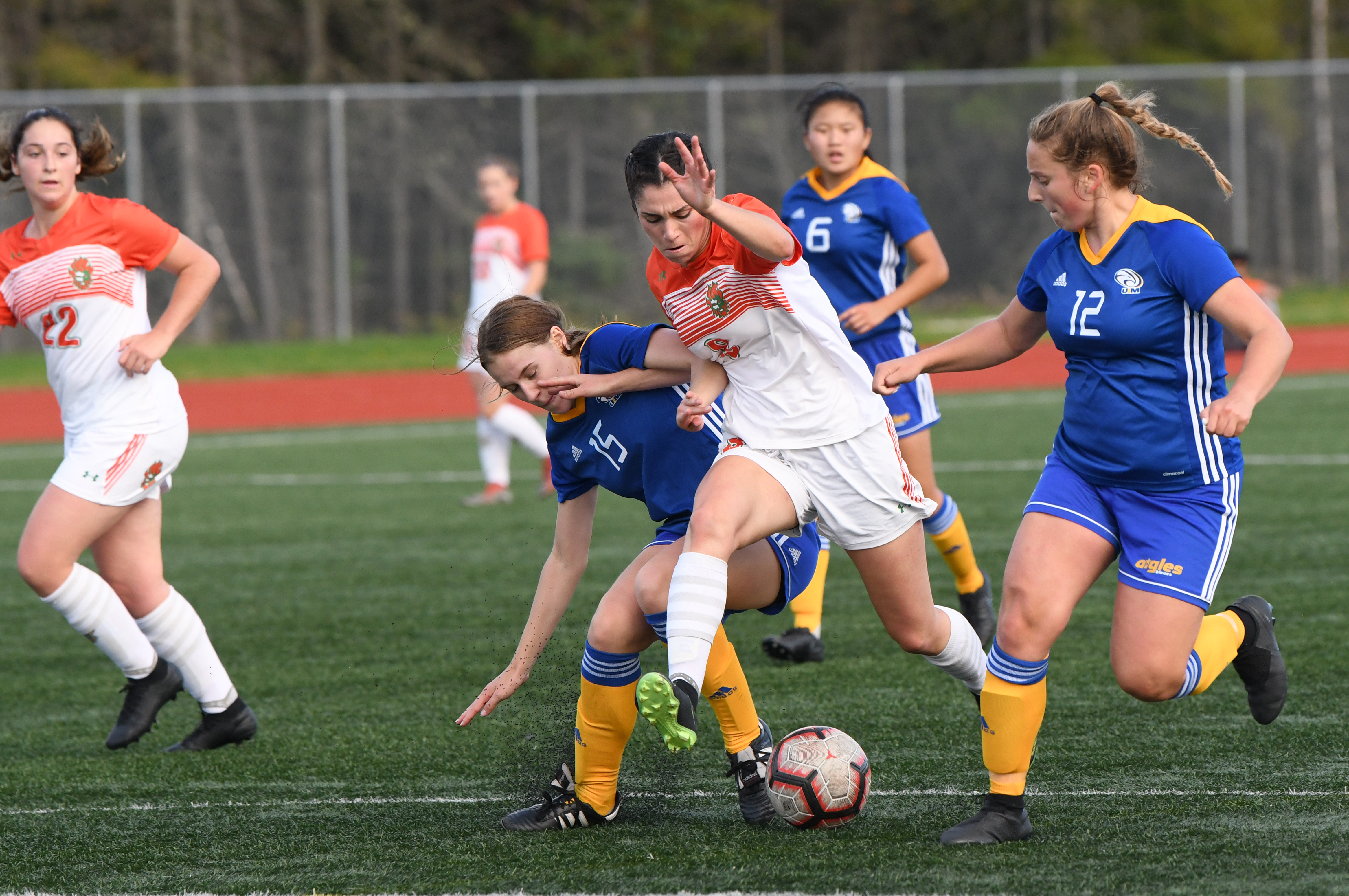 The 10-time AUS champion Capers finished second in the AUS regular season standings and ranked inside the Top 5 nationally all season long. They finished the regular season ranked No.44.

The Capers were led by three-time AUS MVP and captain Ciera Disipio, who had three goals and eight assists. Alliyah Rowe scored 14 goals to lead the conference and also won the AUS Rookie of the Year. Both Disipio and Rowe were named AUS First Team All-stars. Fatou Ndiaye, Madison Lavers and Rachel Leck were named second-team AUS All-stars.

Statistically, the Capers led the conference in scoring with 37 goals for and were third in goals against only allowing nine. The Capers are making their 11th appearance at the U SPORTS national championships in program history. 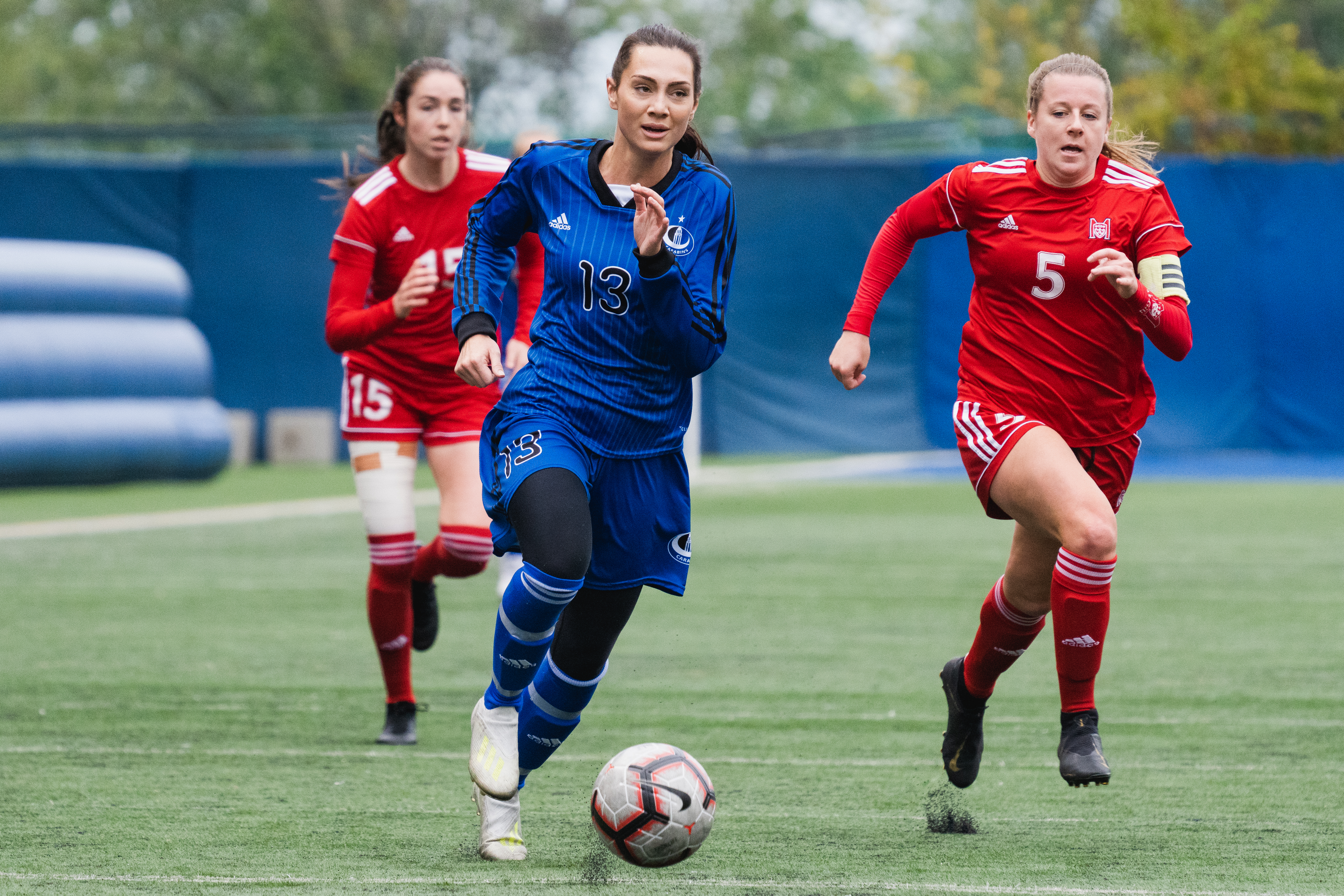 Once again this year, the Carabins women's soccer team has proven to be one of the elite in Canada.

The team finished 10-2-2, to finish in second place in the RSEQ regular season standings. In the conference semifinal, head coach Kevin McConnell's side had to contend with a terrible weather. Despite a torrential downpour, rookie Maxyme Nobert was able to move the strings in the 88th minute to allow his team to beat the Laval Rouge et Or 1-0 to reach their 13th provincial final in a row. The Carabins then went on to beat the UQAM Citadins to take home the title. 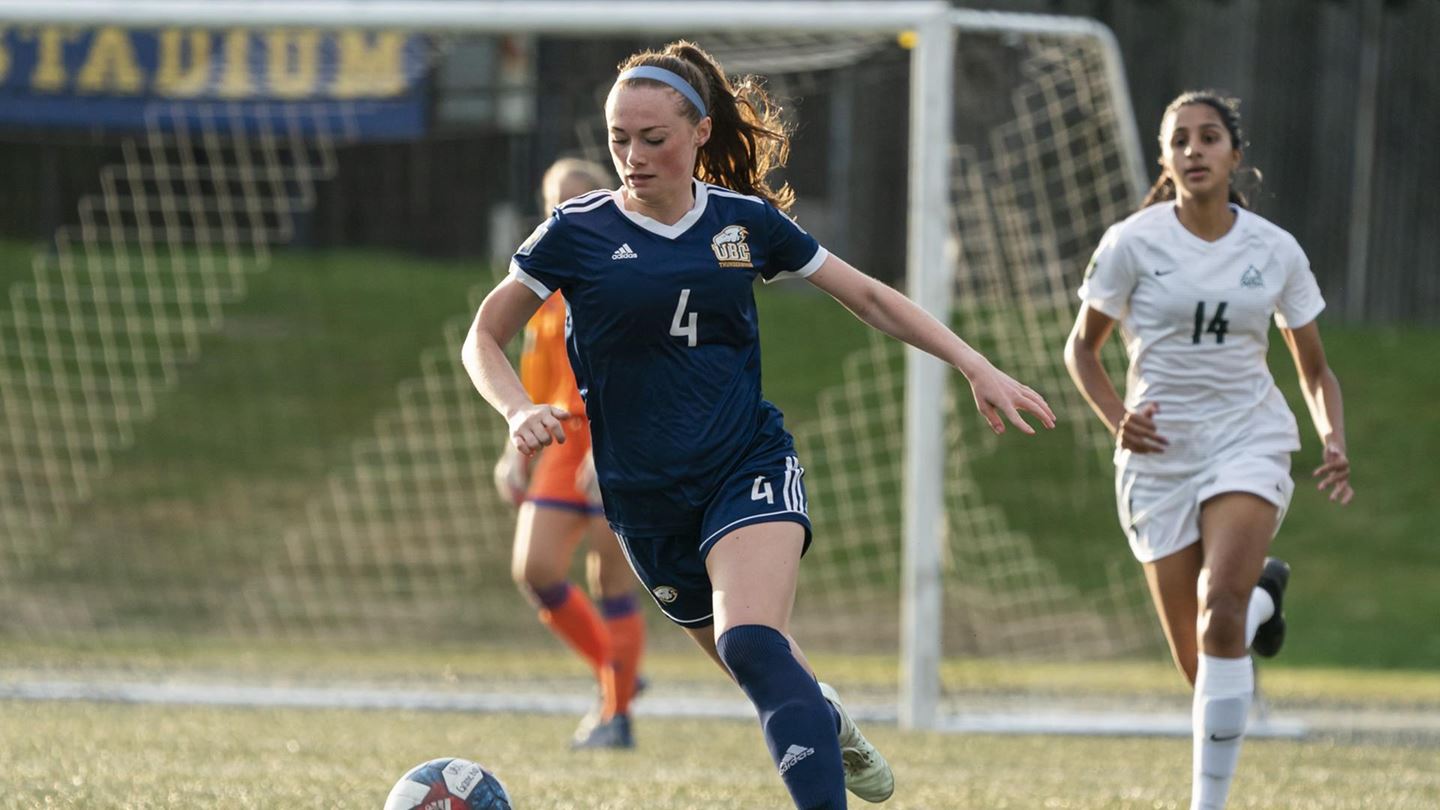 The UBC Thunderbirds return to the U SPORTS Women's Soccer Championship for the first time since 2016.

After a pair of wins in the Canada West play-in round and quarterfinals over Lethbridge and Saskatchewan, the Thunderbirds upset the two time-defending conference champion Trinity Western Spartans 1-0 to earn a place at the national tournament.

UBC is the most successful program in U SPORTS history with a record six national titles.

In the regular season, UBC placed third in the CW Pacific Division after going 8-2-4. The T-Birds’ were led by a strong defence, backed by veteran goalie Emily Moore, who started all 14 of her teams games while ranking second among Canada West ‘keepers with an .864 save percentage. Offensively, contributions have come from a variety of sources, ranging from senior Alyssa Hunt, who led the team with six goals, to rookies Nisa Reehal (three), Katalin Tolnai and Vanessa Tome (one each). 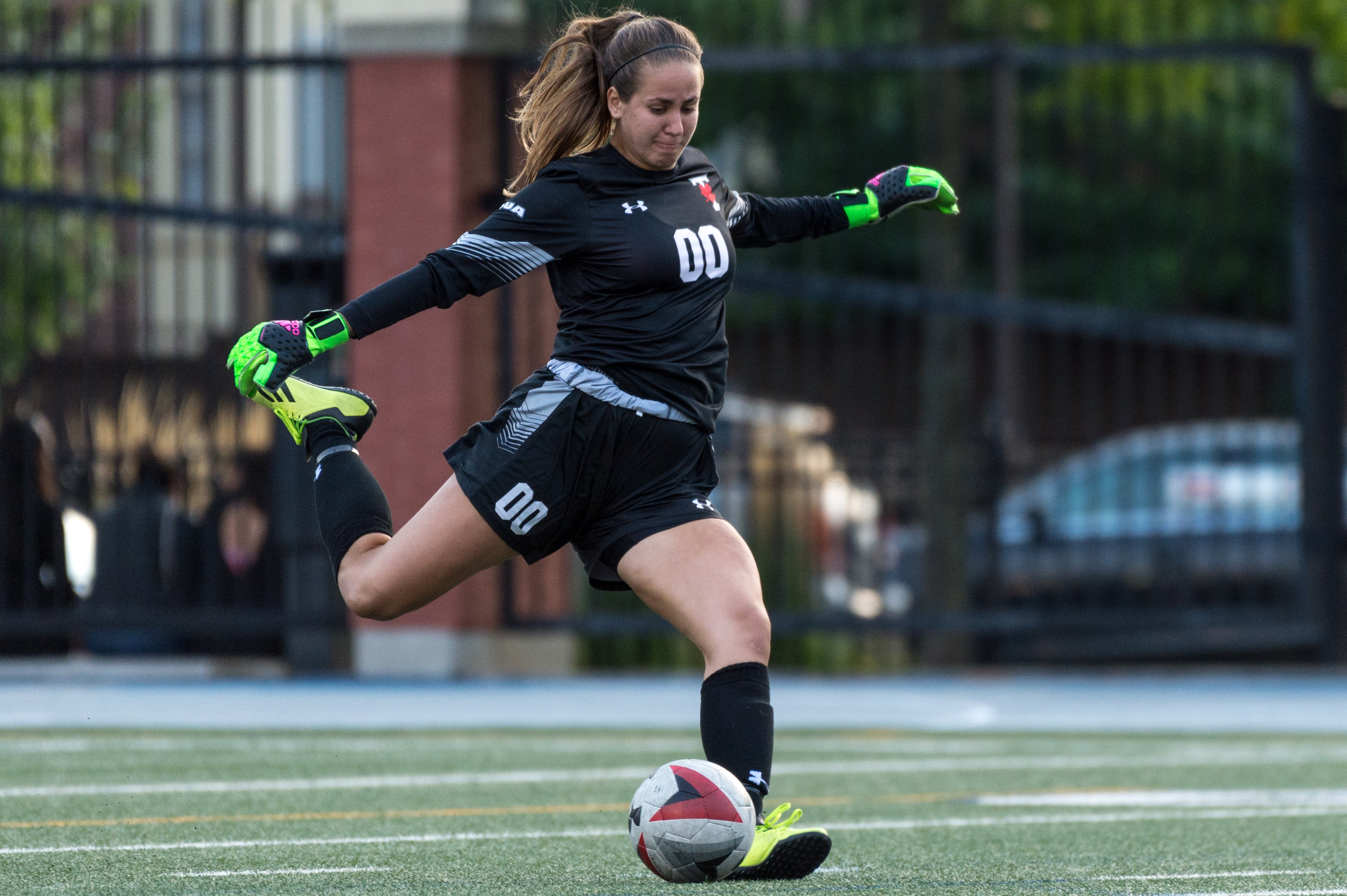 The Varsity Blues have certainly made a name for themselves in U SPORTS soccer over the past few weeks. After finishing the regular season with a 7-4-3 record in fourth place in the OUA East division, the Blues squeaked out a 1-0 victory over the fifth-ranked Ontario Tech Ridgebacks in the first round of the playoffs.

Toronto then met the then No. 5 nationally-ranked and undefeated Queen’s Gaels in quarter-final action. Third-year midfielder Miranda Badovinac scored two goals and added one assist in leading U of T to an upset 3-1 victory over the Gaels to book their ticket to their first OUA Final Four since 2004.

The Blues went onto battle the No. 7 Western Mustangs, who were also undefeated, in OUA semifinal action and went scoreless through 105 minutes of play. Western scored midway through extra time but that did not stop U of T from clawing back. Badovinac scored a beautiful goal to even the game and force penalty kicks, where U of T came out on top, 2-1 (3-2 PK) to earn a spot in the OUA final and national tournament.

U of T then fell to the York Lions in the provincial championship final to match their program-best OUA silver-medal finish. 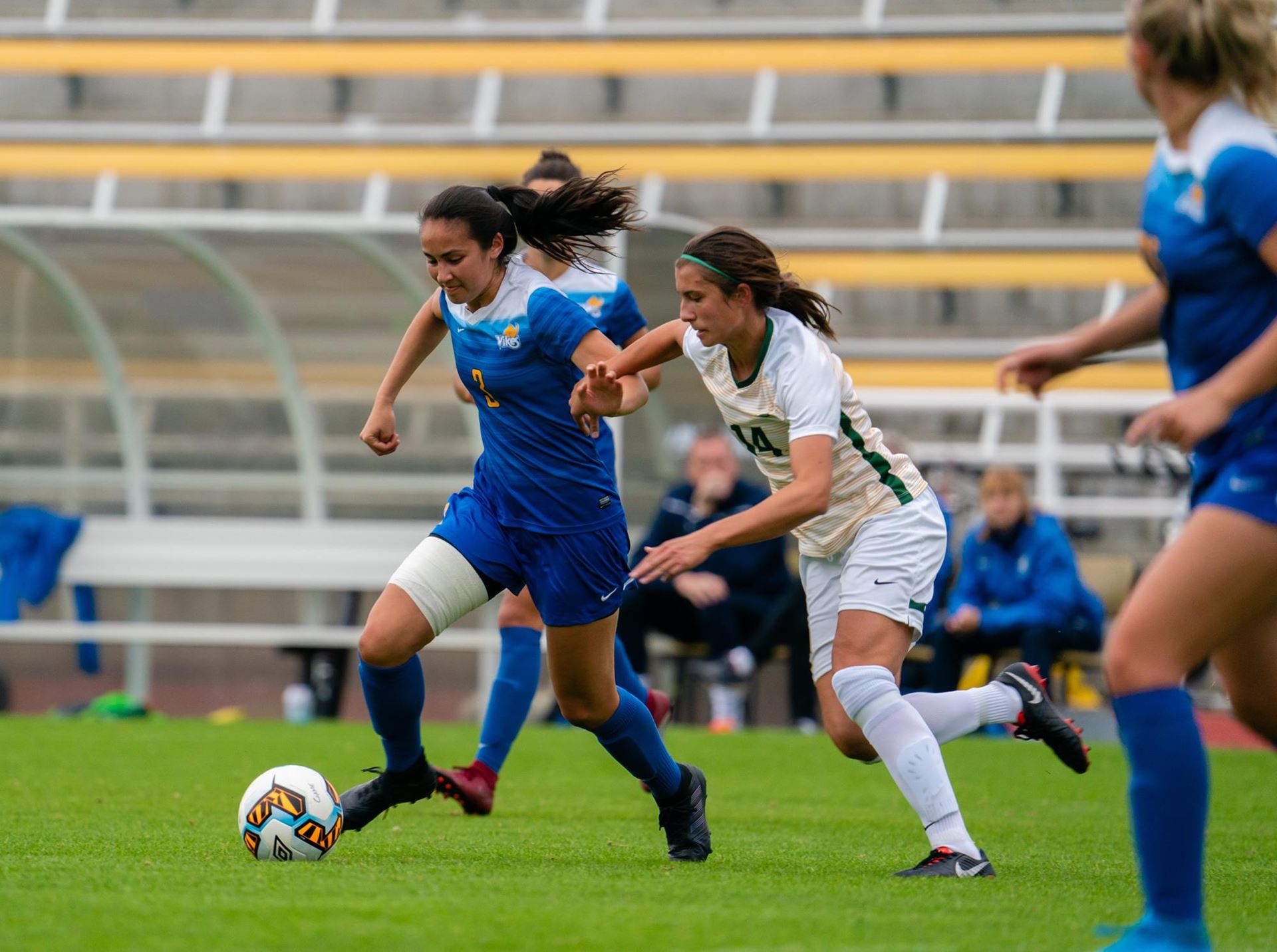 The Vikes finished the season on a 5-1-2 run, including impressive wins against the UBC Thunderbirds on the road, and becoming the first team this season to knock of the Calgary Dinos in the final week of the season.

In the postseason, Victoria eliminated Regina in the play-in round with a 5-4 victory in penalty kicks, before falling to MacEwan 1-0 in the quarterfinals. When the national tournament begins, the host Vikes will have had ample time to prepare, with 11 days between matches. 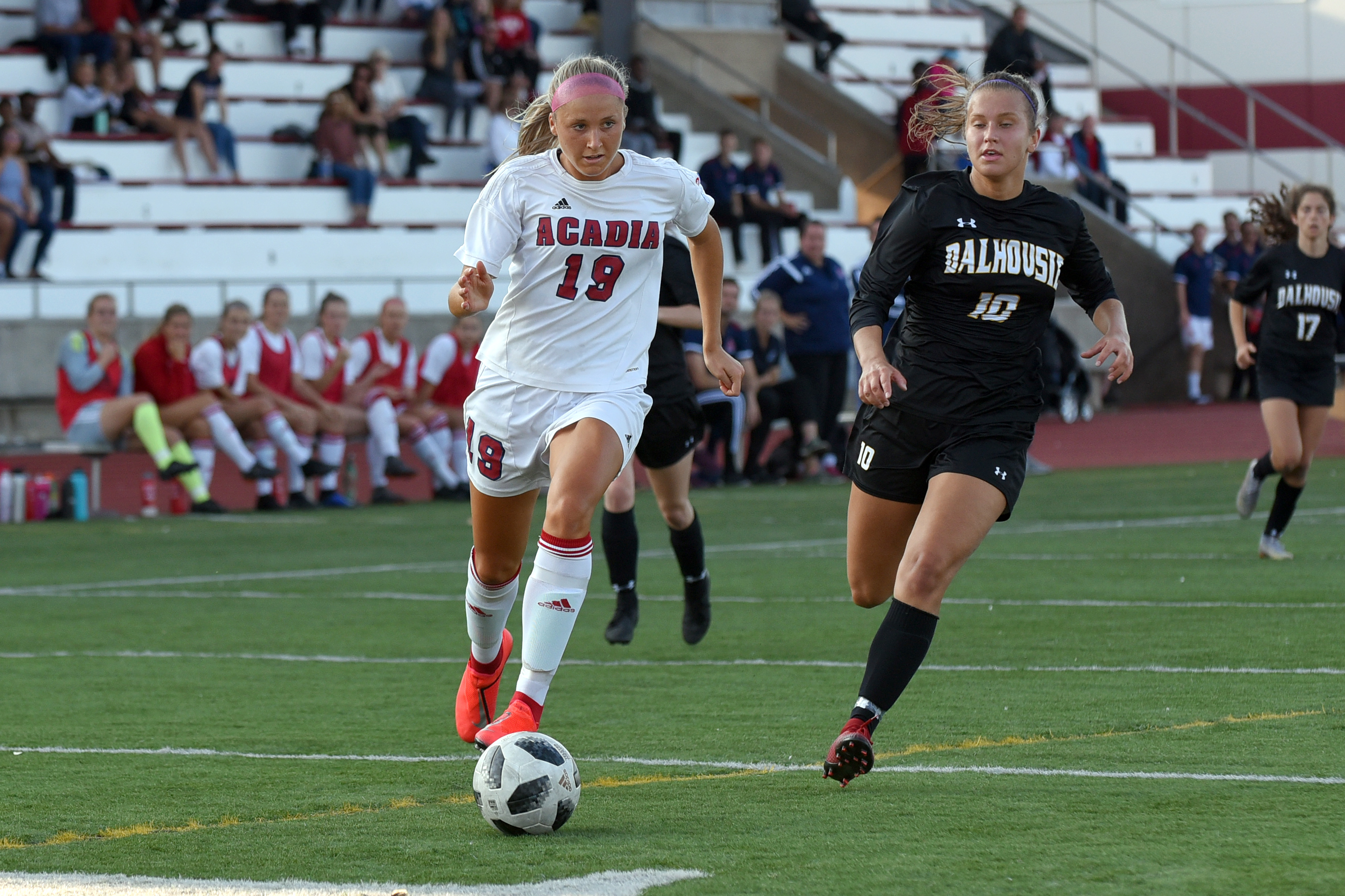 The Axewomen soccer team posted an undefeated 9-0-3 season and finished first place in the AUS standings. The last time the Axewomen went undefeated was in 1996 when the team captured their last AUS championship.

Opening the season with a 4-0 win against Mount Allison, the Axewomen went on a four-game streak without letting in a single goal.

Not until a tie versus Memorial in Newfoundland on Sept. 29, had the Axewomen tied a game in a scoreless battle against the Sea-Hawks. In the five-game winning streak, the Axewomen defeated the nationally-ranked and first place Cape Breton Capers to take over first place in the standings.

A tie against Dalhousie and their final game against StFX that ended in a tie were the only blemishes of a undefeated season.

The Axewomen picked up a semifinal win against UNB and a loss in the championship game versus the host Capers to conclude the historic season. 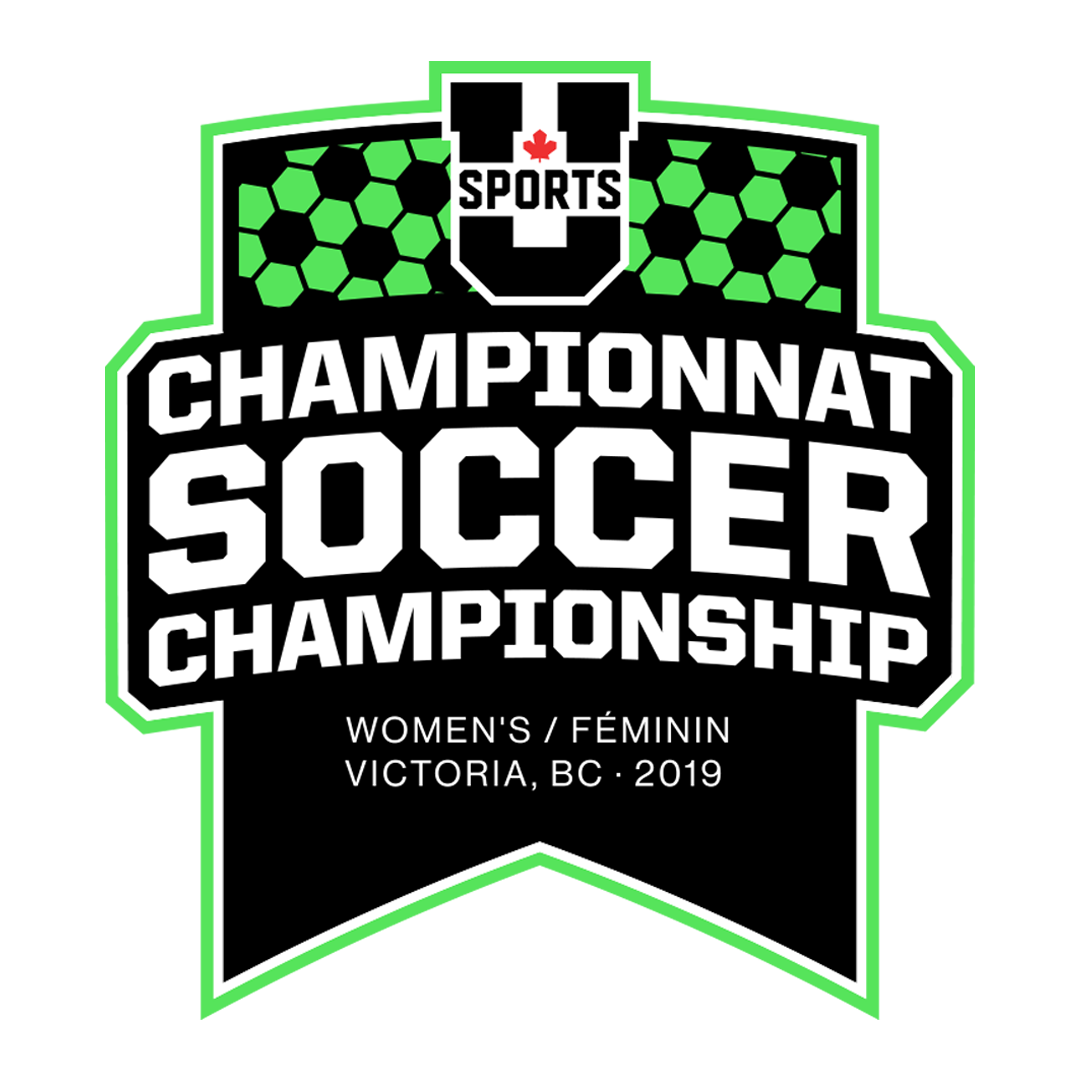