Sydney, NS – It was a golden moment on Sunday afternoon for the MacEwan Griffins.

MacEwan captured the 2021 U SPORTS Women’s Soccer Championships with a thrilling victory in penalty kicks over the Trinity Western Spartans after being tied 2-2 in regular time.

Third-year goalkeeper Bianca Castillo – who came off the bench late in extra time to replace injured starter Breanna Truscott – dove to her right to make the game-winning stop on senior forward Kathryn Harvey of the Spartans.

In the penalty-kick round, the Griffins edged the Spartans 3-2.

In an entertaining and fast-paced first half, the Canada West champions came out strongly, garnering three corner-kick opportunities in the opening 10 minutes.

In the ninth minute, after winning a footrace with Griffin fifth-year senior defender and second-team All-Canadian Samantha Gouveia, Harvey made a nifty cross, but Truscott was able to corral the ball.

Trinity Western was rewarded for its strong start in the 15th minute, when sophomore midfielder Maddie Melnychuk, who was playing with a heavily taped right wrist that was injured in semi-final action, made a stellar cross to Harvey, who put a strike behind Truscott to give her side a 1-0 edge. 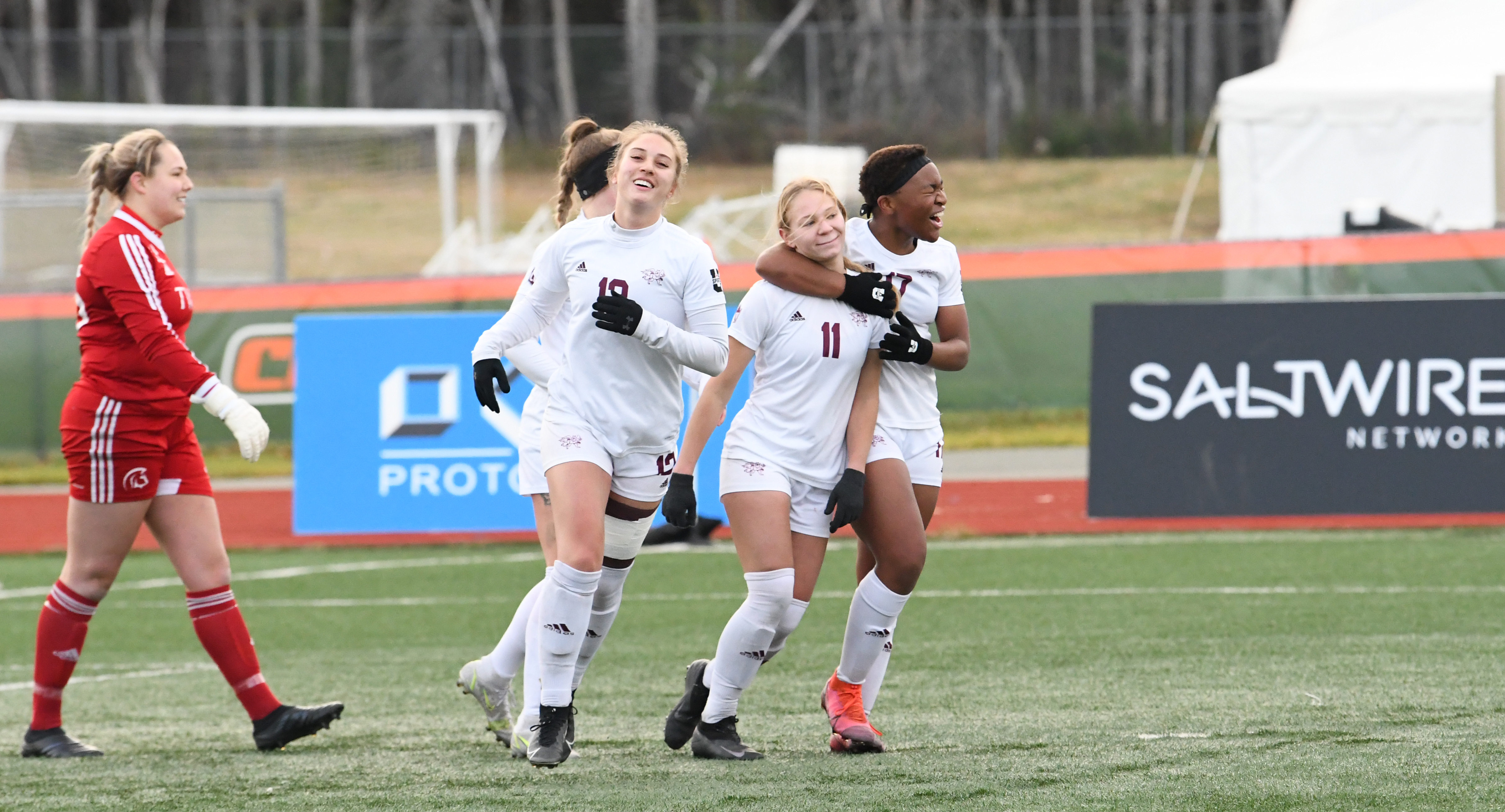 In the 24th minute, off a corner by second-year midfielder Sierra Halldorson, fifth-year defender Elizabeth Hicks, a first-team All-Canadian, rifled a blast, but Truscott was able to keep it at a one-goal deficit.

A short time later – in the 36th minute – McCarthy tied the match 1-1, on a penalty kick, firing a low shot inside the right goal post.

Just before the teams headed to the locker room, the Griffins took a 2-1 advantage, when freshman Grace Mwasalla fought off a defender and then found fifth-year forward Salma Karnel, whose high-end strike found the back of the net from 22 yards away.

Early in the second half, the Griffins garnered a glorious opportunity to extend their edge to two goals, when Mwasalla tested the Spartan keeper from six yards out, but Miller made a spectacular save.

In the 62nd minute, the Spartans notched the tying marker, when senior defender Aliya Coy slid a pass through for Harvey, who made no mistake, collecting her second goal of the match. 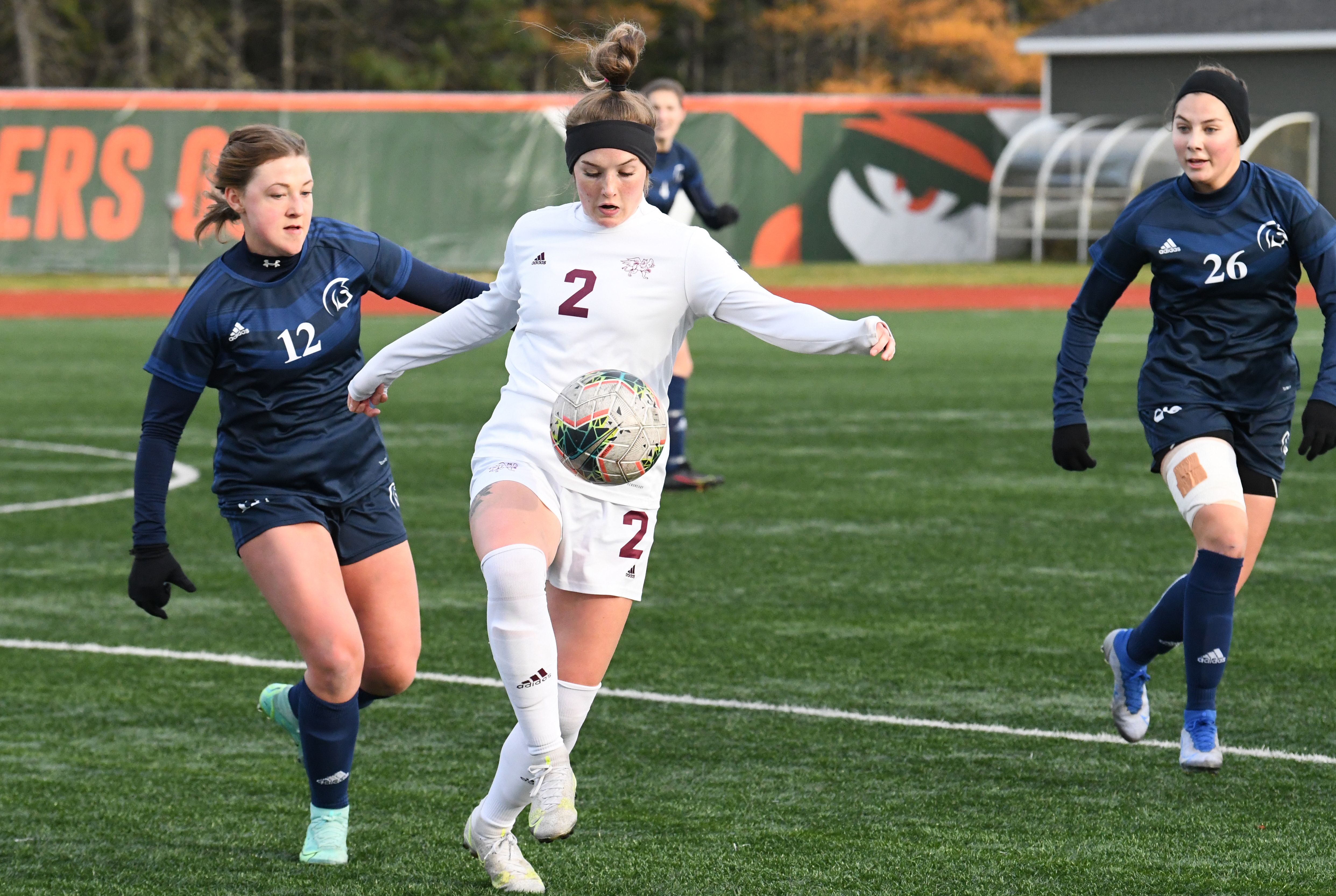 Looking for the go-ahead tally, junior forward Maya Morrell made a stellar cross to Mwasalla, whose quick shot went just wide of the right goal post behind a beaten Miller.

In the 82nd minute, off a corner kick from fourth-year midfielder Erin Van Dolder, the Griffins got a head on it, but they couldn’t generate a dangerous scoring threat.

Five minutes later, the Spartans had a great chance to pull ahead, when sophomore midfielder Grace Van Den Brink lofted a shot that was heading towards the top corner, but Truscott soared to her left to get a hand on the ball and make the spectacular stop.

In the first 15-minute half of extra time, the Griffins had the first scoring chance – in the 99th minute – but Miller made the stop on a strike from Mwasalla. On the ensuing corner kick, from Van Dolder, a MacEwan header sparked a goalmouth scramble, but the Spartans were able to clear the zone.

After receiving her second yellow of the match, Hicks received a red card in the 117th minute, leaving the Spartans one player short for the home stretch.

Neither side was able to generate any chances to notch the game-winner in the second half of extra time.

In the bronze medal match, the Laval Rouge et Or defeated the UBC Thunderbirds – also in penalty kicks – 1-0. 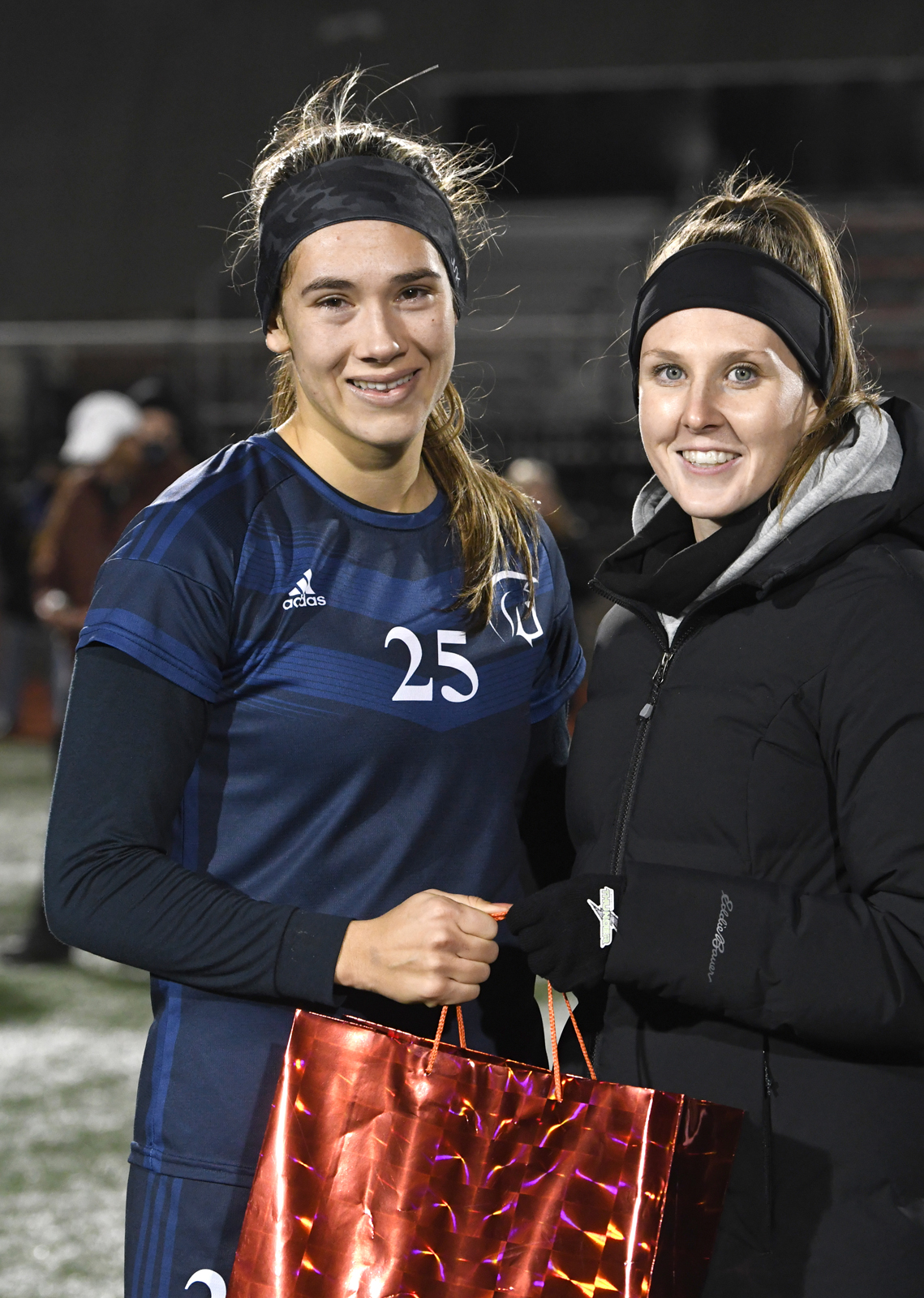 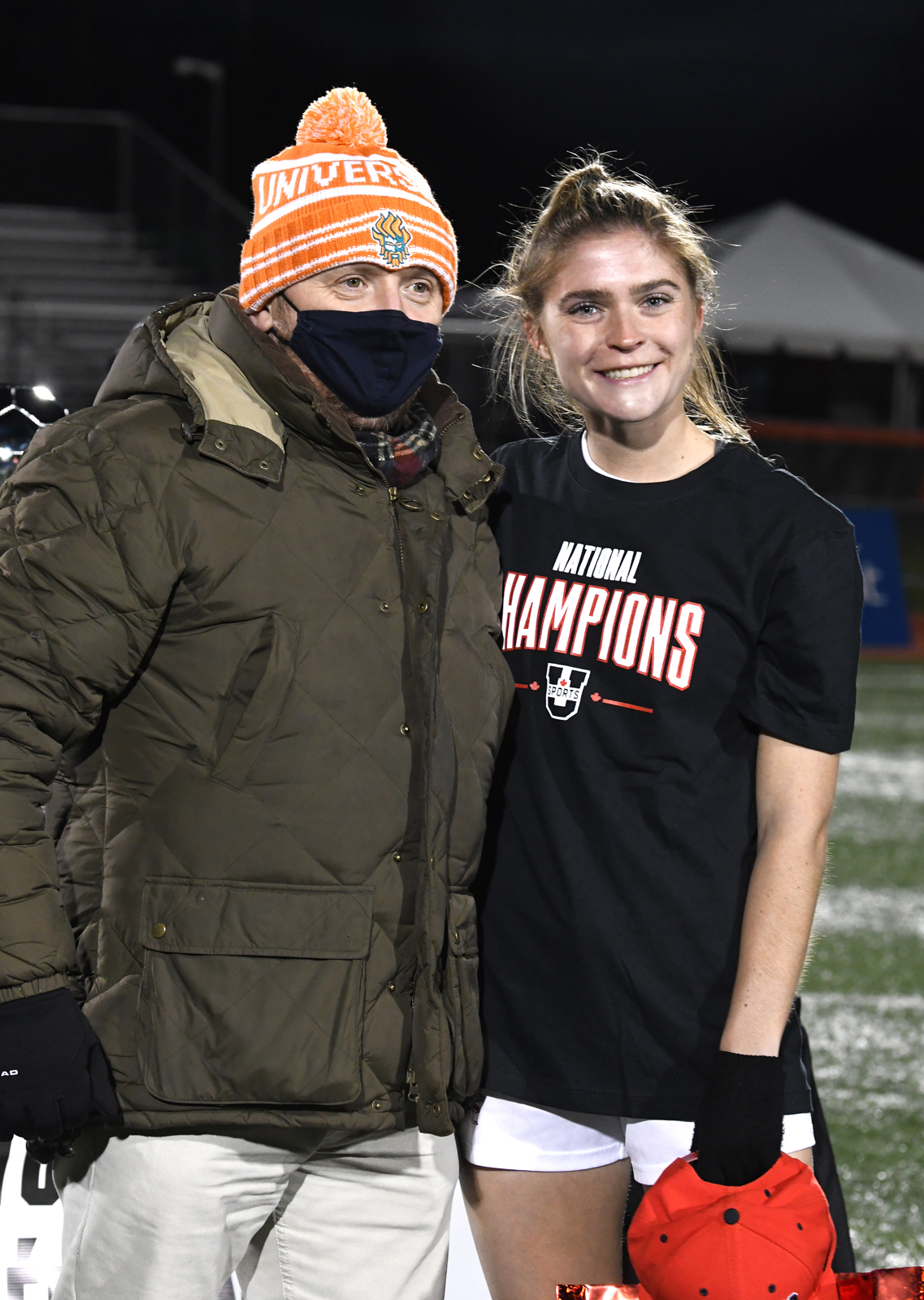 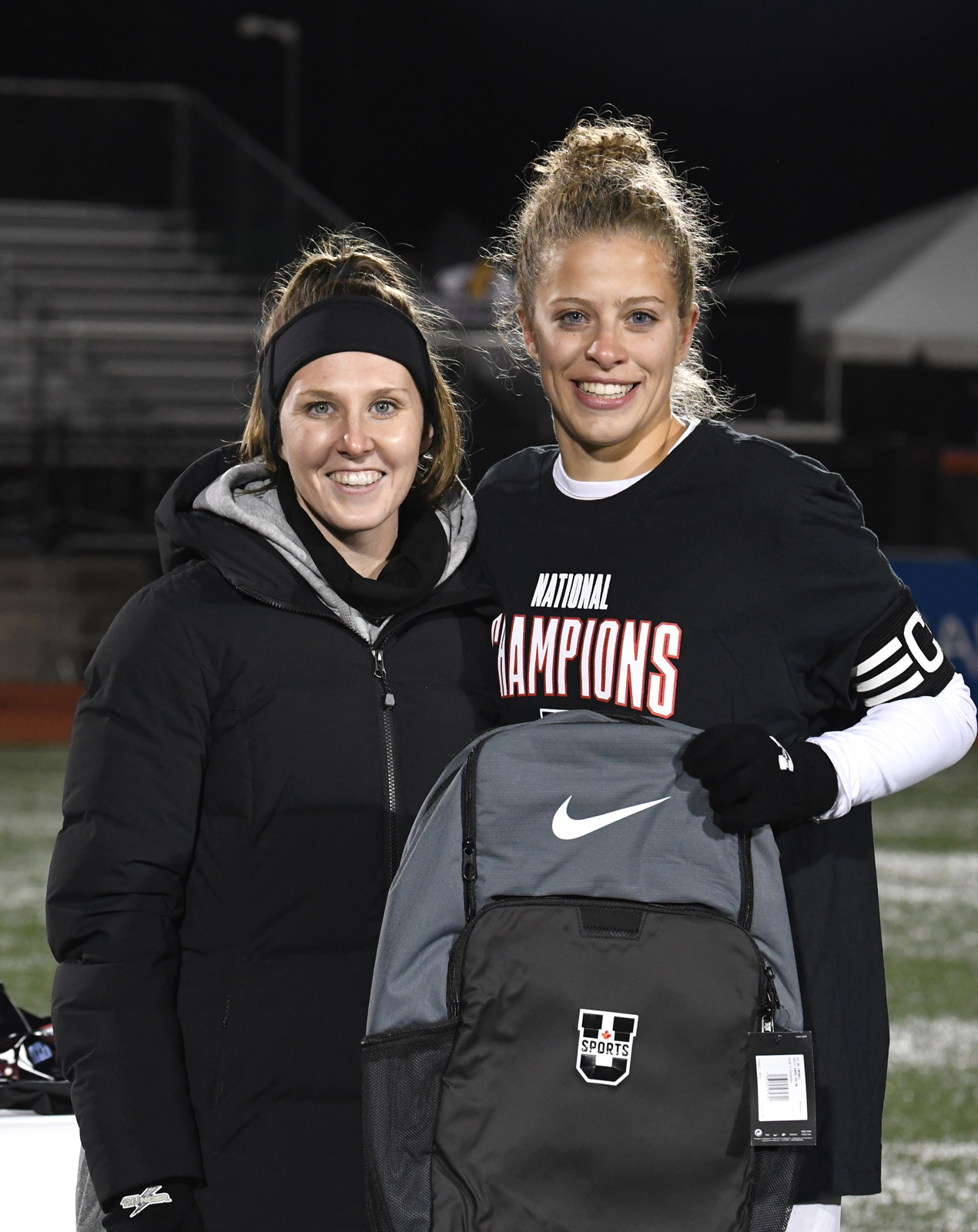