Sydney, NS – The MacEwan Griffins will play for gold on Sunday afternoon at the 2021 U SPORTS Women’s Soccer Championships.

In a battle of Canada West rivals on Saturday, the Griffins punched their ticket to the title match with a 1-0 extra-time victory over the UBC Thunderbirds, powered by a marker from fifth-year forward Meagan Lemoine in the 96th minute.

Off a corner kick from senior midfielder Erin Van Dolder, Lemoine soared with UBC goalkeeper Emily Moore and got her head on the ball; Moore snagged it, but it had already crossed the goal line.

The Griffins carried the lion’s share of the play early in the match, garnering a prime scoring opportunity just three minutes in, but fifth-year forward Salma Karnel’s shot off a free-kick rebound dribbled just wide of the right post behind Thunderbird fifth-year keeper Emily Moore.

In the 17th minute, off a corner kick from Lemoine, Karnel got her head and left foot on the ball, but the UBC defenders were able to clear the zone.

MacEwan collected the best chance of the first half to open the scoring when fourth-year midfielder Raeghan McCarthy laced a left-footed volley, but Moore soared to deflect the bullet over the crossbar.

In the 40th minute, UBC threatened but a header from junior midfielder Janika Sangha – off a corner kick from sophomore forward Vanessa Tome – went wide of the far post.

Off a run by Thunderbirds late in the opening half, junior midfielder Sophie Damian ended up with a chance – just outside the 18-yard box – but her strike sailed wide.

On an early second-half free kick – in the 49th minute – from the UBC end line, and just outside the 18-yard box, senior midfielder Erin Van Dolder curled in a cross, but the Thunderbird defense cleared the zone.

A short time later, freshman Grace Mwasalla made a run – flanked by a pair of UBC defenders – but Moore made the save on her shot from 20 yards out.

Moore then batted away a corner kick from Van Dolder, before any of her MacEwan teammates could get a shot on goal.

Continuing her strong performance in the second half, Mwasalla made a great run down the wing, with her cross deflected out of bounds, which let to a corner kick for her teammate Van Dolder. But, once again, the Griffins could not get on the scoresheet.

On the second of back-to-back corner kicks for UBC, Damian curled in a lovely ball, but MacEwan’s sophomore keeper Breanna Truscott punched it away, bounded forward and then soared to corral it, showing her athleticism to help keep it scoreless.

In the final five minutes of regulation, off a great run from Karnel, the Griffins received another corner-kick chance; on that play, Mwasalla got her foot on the ball, but Moore made another save.

On a late free kick – from about 25 yards out, in the center of the field – sophomore midfielder Katalin Tolnai peppered a strike towards the inside of the right goal post, but Truscott dove to make the stop.

UBC’s best opportunity to score the equalizer in extra time came late, when freshman midfielder Aislin Phillips got a sliding shot away while fending off a MacEwan defender, but Truscott made a sprawling stop. 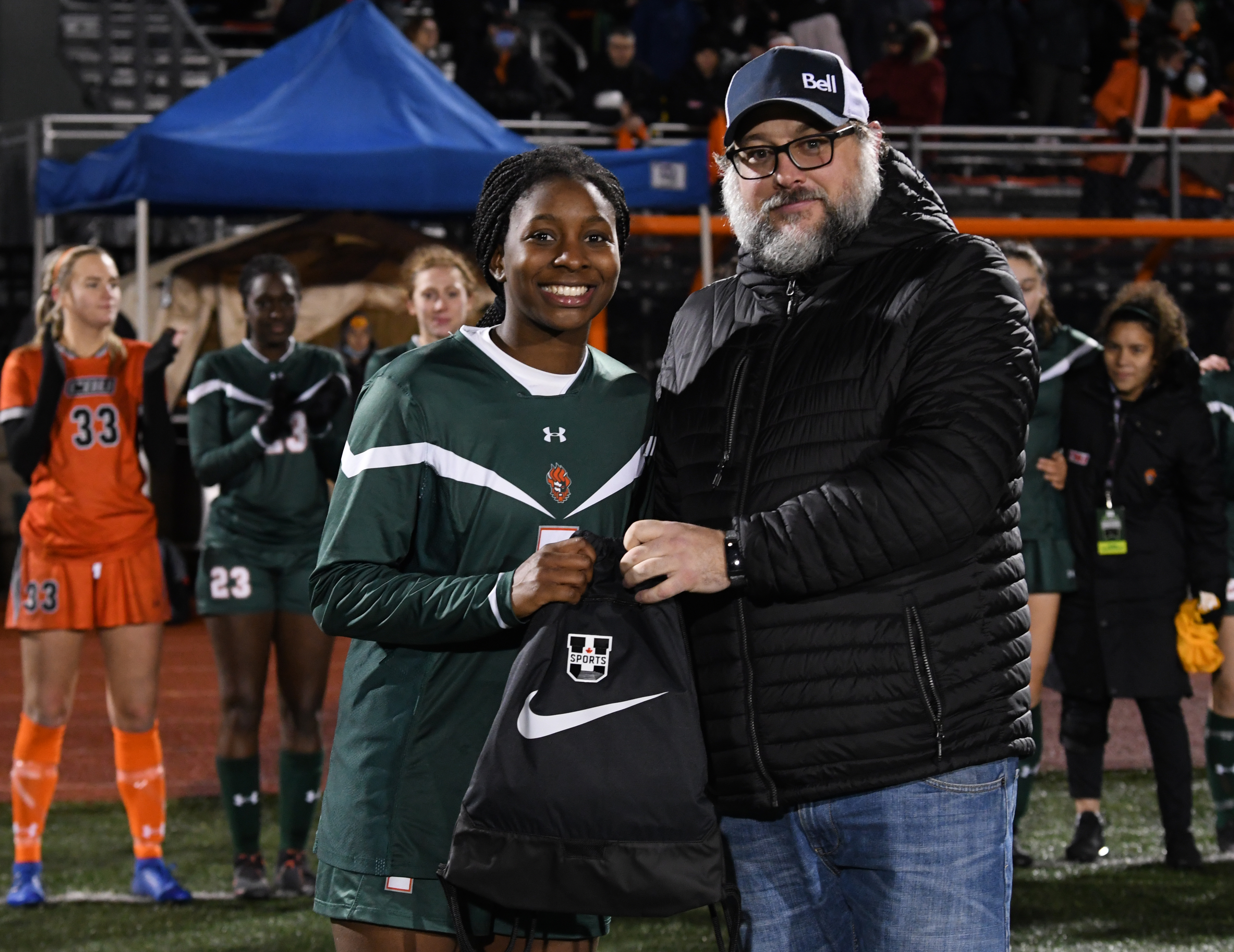 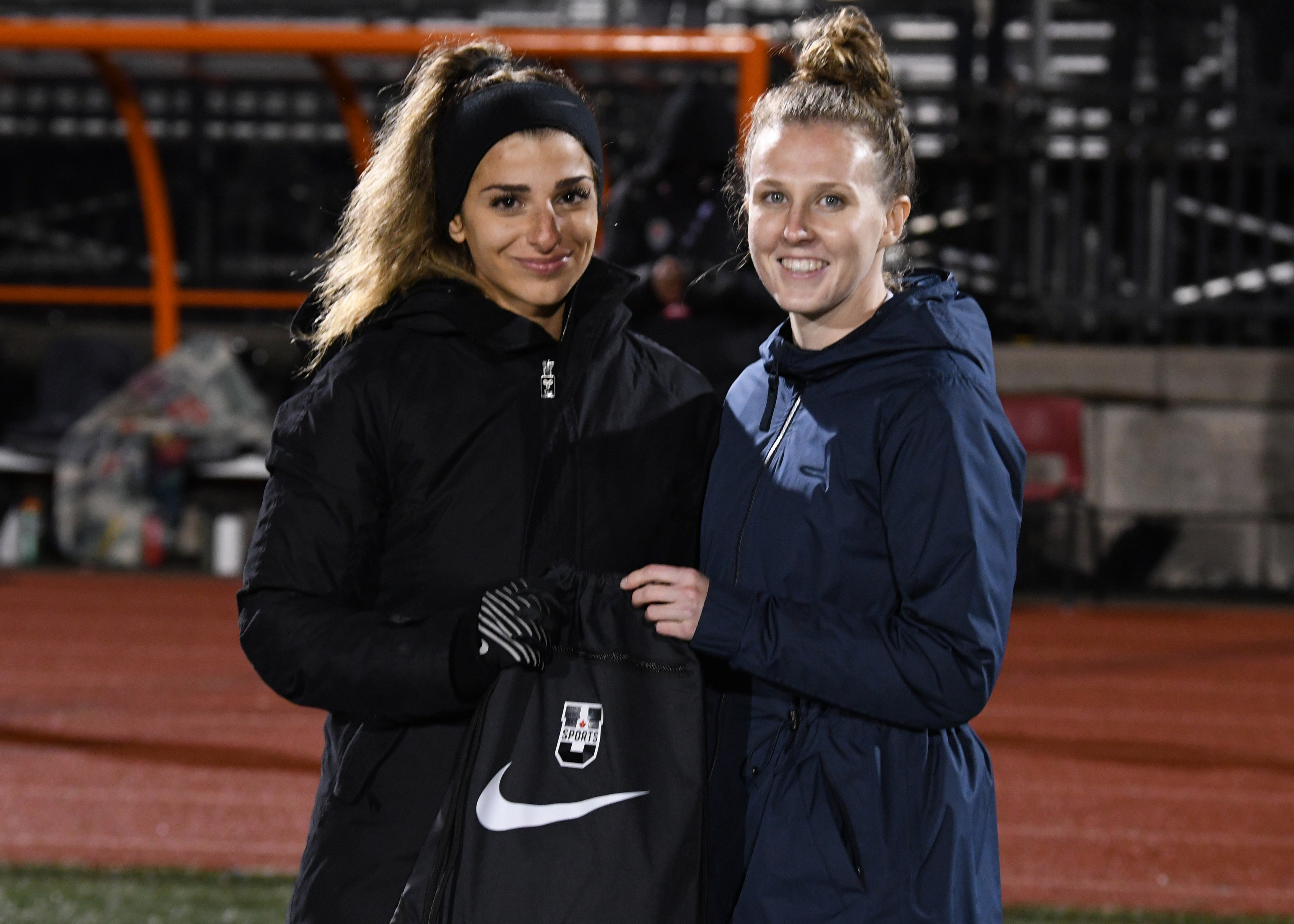