Looking to win their 14th Sam Davidson Memorial Trophy and first since 2013, the UBC Thunderbirds enter the 2017 U SPORTS Respect Group Men’s Soccer championship as the most decorated side in the eight-team field

A championship schedule and team-by-team previews are available below.

The 2017 U SPORTS Respect Group Men’s Soccer Championship, hosted for the first time by Thompson Rivers University in Kamloops, B.C., kicks off on Thursday at Hillside Stadium and concludes next Sunday with the gold-medal final at 5 p.m. ET / 2 p.m. PT. Live-streaming is available on USPORTS.LIVE. 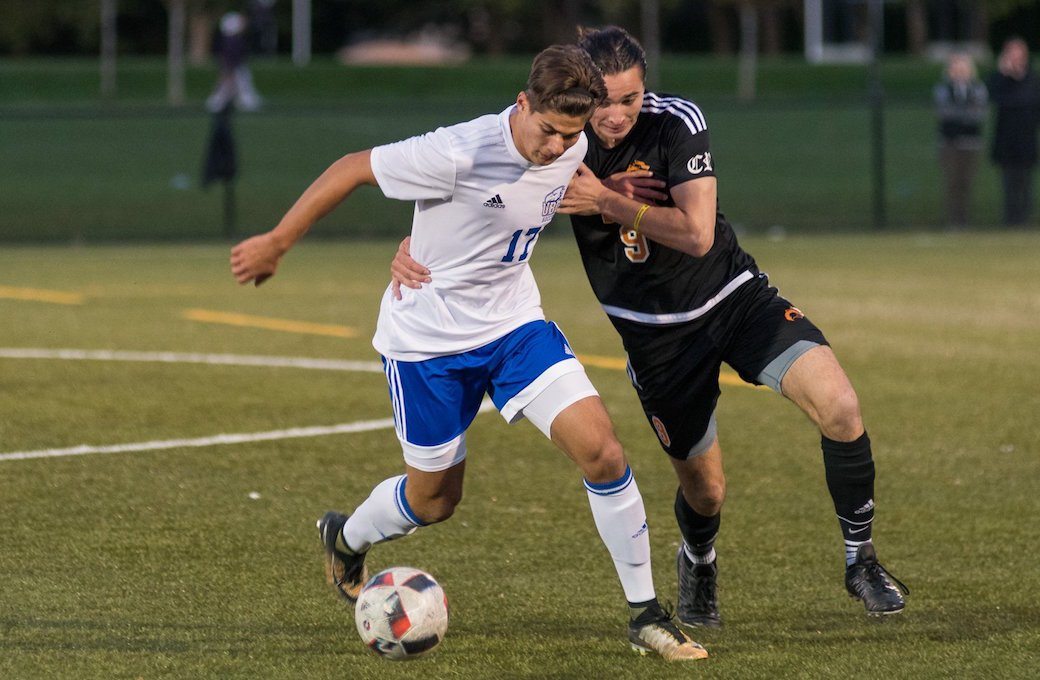 In his 22nd season at the helm of the Thunderbirds, UBC head coach Mike Mosher brings one of his youngest-ever teams to the U SPORTS Respect Group Men's Soccer Championship in Kamloops, B.C. The T-Birds topped the Canada West Pacific Division with a 10-4-1 regular season record. The team then captured the Canada West banner on home turf in Vancouver, despite having just three senior players on the roster. Twenty-one of UBC’s 30 goals in 2017 were scored by either rookies, or players in their second year of eligibility. 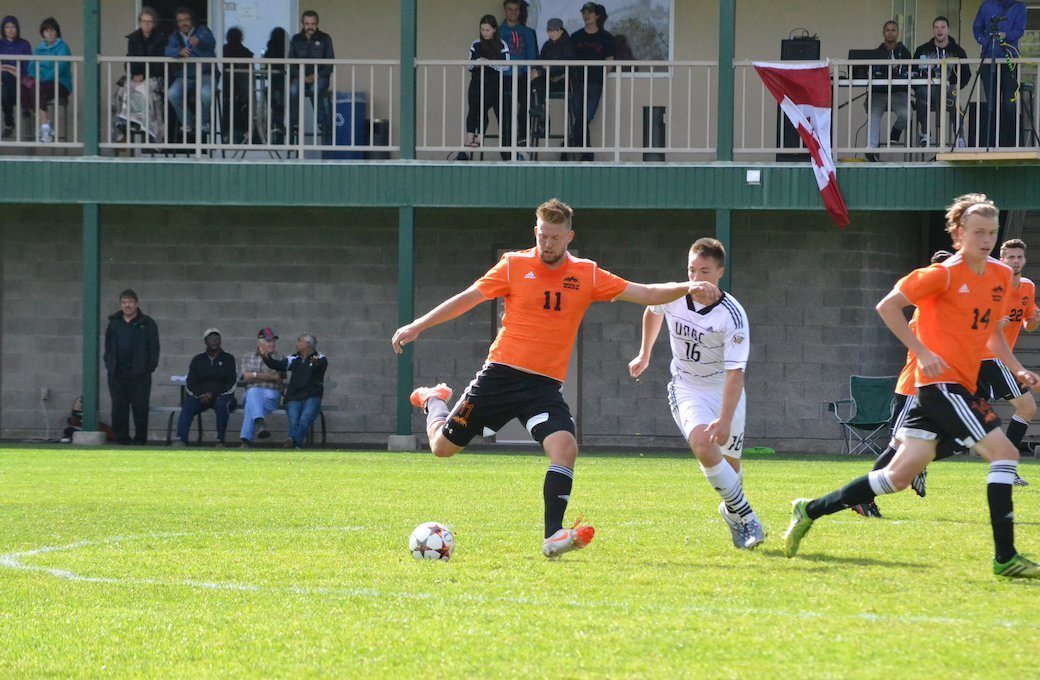 The WolfPack have established a new school standard from nearly the start of the year.

The team finished with their highest point total and position since they joined Canada West four years ago. Along the way, the team had a number of solid individual performances – notably, their third-place finish the Canada West Pacific Division allowed them their first ever postseason berth. In their inaugural playoff match, the ‘Pack found the back of the net four straight times en route to a 5-1 win over Saskatchewan, which helped move them into the Canada West Final Four for the first time.

Mitchell Popadynetz has had a career season, being named the Canada West player of the year and a first team all-star after a 17-point season which included a U SPORTS-high 10 assists.  He wasn’t the only TRU player to be honored with an all-star, as Ryan Glanville earned the honour for the third straight season. He was joined on the Canada West second team by defender Finlay McPhie.

Two of the WolfPack’s European recruits Josh Banton and Jan Pirretes-Glasmacher were named to the Canada West all-rookie team. Both Anatoli Levieille and Koffi Nyavor came off the bench to provide a change of pace to the team’s on field demeanor.  Leveille, the youngest player in USPORTS men’s soccer at the age of 16, turned a lot of heads with his quickness and ability. 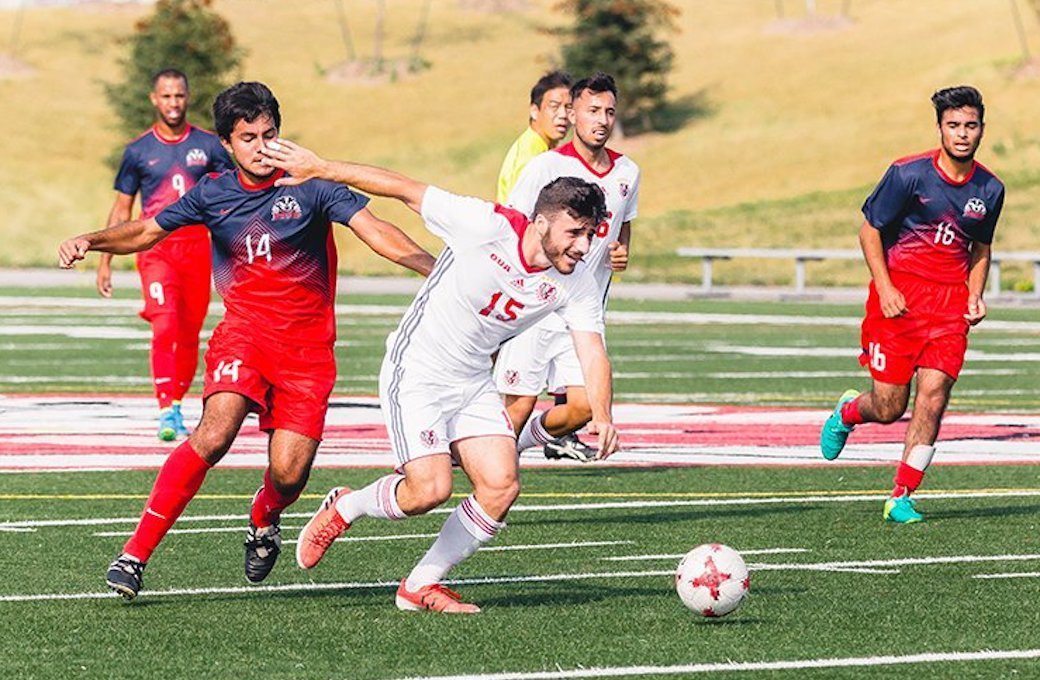 The York Lions are in their fifth straight U SPORTS championship and eighth in the 11 seasons with head coach Carmine Isacco has at the helm. After an uncharacteristically slow start in which they lost two of their first three games, the Lions went undefeated the rest of the way to finish atop the OUA West Division for the 11th straight year and capture their fifth OUA title under Isacco. For the fourth year in a row they allowed the fewest goals in the OUA West, giving up just 11 in 16 regular-season games, and they also scored more goals than the rest of the conference with 50, which ranks second nationally. 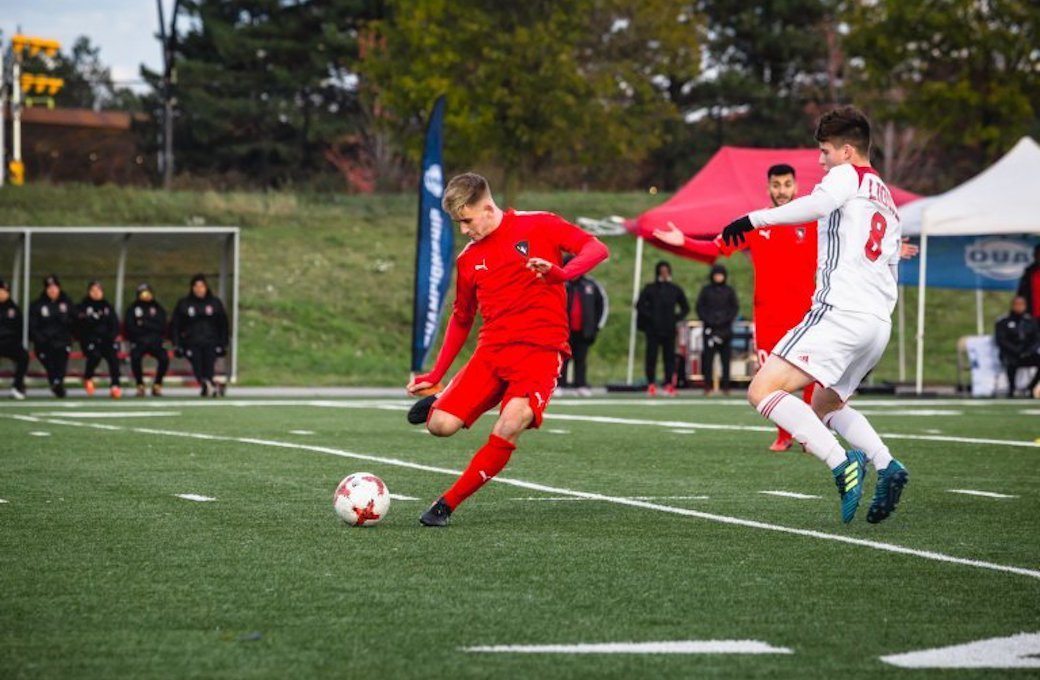 The Ravens men’s soccer team enjoyed a sensational 2017 campaign with a program-best 41 points. Carleton was tops in the nation with 59 goals while conceding only 10 goals in 16 games – the fewest in the OUA. The Ravens won their first OUA East division title since 2011, and the 14th in program history. Carleton was led by dynamic rookie striking duo Gabriel Bitar and Stefan Karajovanovic, who combined to score 31 of the Ravens’ 59 goals – the most goals by any two players from one team dating back to 2004. This is Carleton’s seventh appearance at the U SPORTS championship since the program began in 1982, and its first since 2012. The Ravens have previously made it to the championship final on two occasions, finishing as runner-up in both 1984 and 2002. Carleton holds a 4-7-1 all-time record in the event. 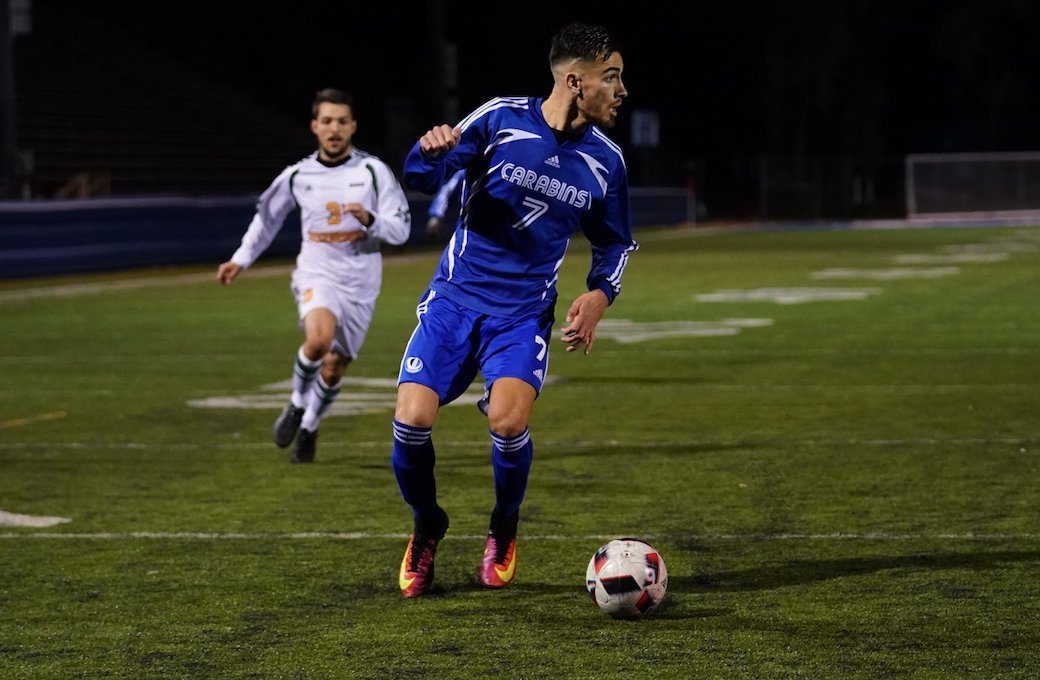 The Montreal coaching staff had high hopes for the 2017 campaign after a good winter of practice indoors, and it’s fair to say that they haven’t been disappointed. The Carabins started the year on a roll and kept that offensive pace going all year long, winning their first nine games with 36 goals scored. Midfielder Omar Kreim was an outstanding force, controlling the ball with ease and creating offensive chances for his forwards at an amazing rate. With only one loss on the year, it’s the best season for the Montreal in program history after earning 10 wins in 12 games, topping the RSEQ standings with 31 points.

The Citadins’ season began with a sign of renewal. Six rookie players, coach Christophe Dutarte and his senior players worked to consolidate cohesion within the group. Over the weeks, training led to experience and victories. With a record of seven wins, four losses and one draw, the UQAM men made it to the RSEQ playoffs, finishing the season in third place. UQAM has participated in the RSEQ playoffs in nine straight seasons – and the Citadins head into the national championship  with composure and confidence. 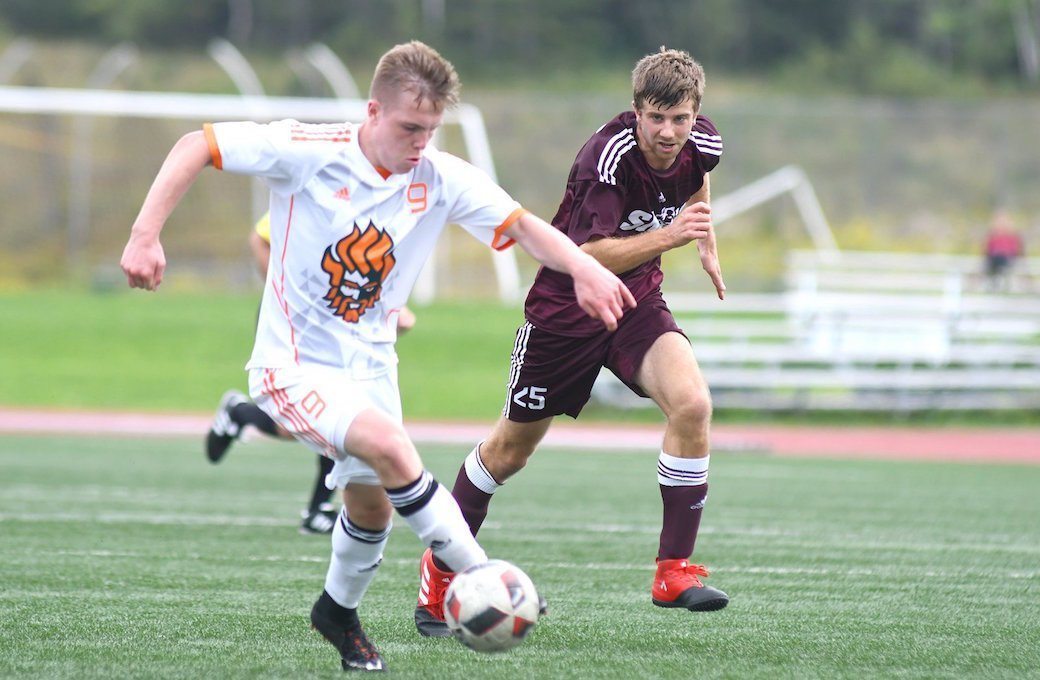 The Cape Breton Capers finished the 2017 season in first place in the AUS regular season standings, with an unbeaten 11-0-1 record and 10 straight wins to cap off the campaign. Cape Breton was led in goals by rookie Charlie Waters with eight, who also tied with second-year Caelan Budhoo team-lead in assists with four. Water also led in total points with 12. Ben Jackson led the team in all goaltending categories with 11 wins, seven shutouts and a .846 save-percentage. Key players to watch on the Capers include Waters, forwards Cory Bent and captain Stuart Heath, midfielder Marcus Campanile and defenders Peter Schaale and Danny Pritchard. 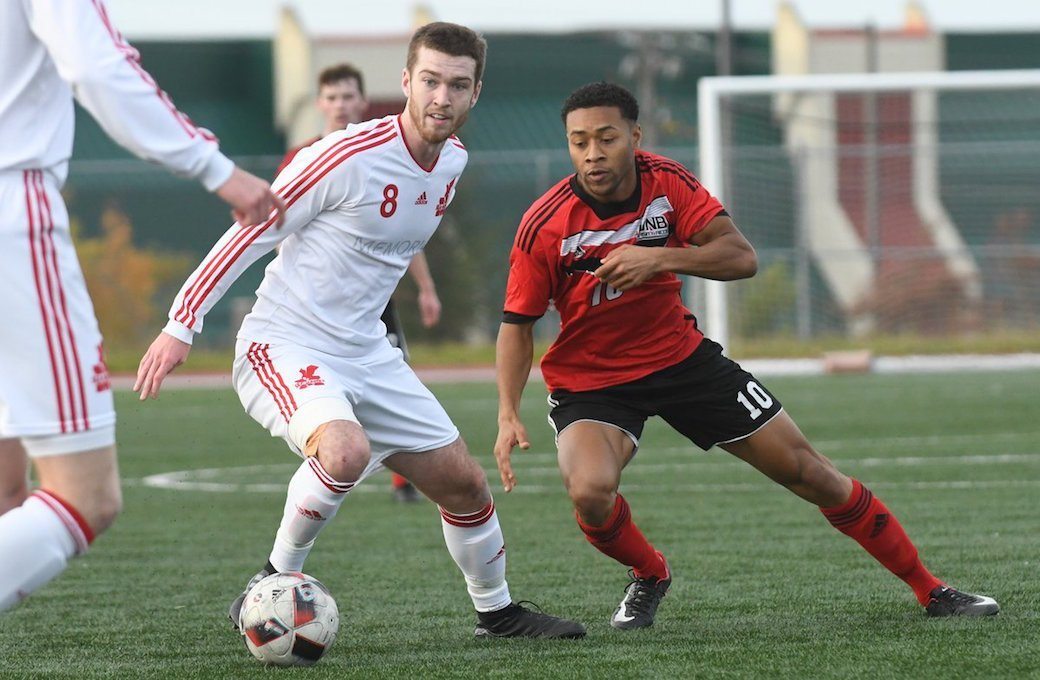 It’s been a tale of two seasons for the UNB Varsity Reds.

The 2017 season began slowly, with two draws and two losses in the first four games. But, through the final eight games, UNB went 7-1, earning third place in the AUS standings. The Varsity Reds’ surge was coupled with striker Dan Walker’s breakout. The third-year kinesiology-major scored eight goals over the final eight games. Three times, he scored more than once in a game. Walker finished third in conference goals.

Freshman fullback Joe Hamilton also assumed a leadership role this season, providing lock-down defence and helped on offence, scoring twice in his rookie campaign. Fifth-year midfield Marcus Lees was his usual reliable self, creating chances for teammates and scoring four goals. Striker Robbie Park, playing his final year of eligibility, returned from an injury-plagued 2016 season and scored four goals as well. Second-year keeper Evan Barker played all but 30 minutes of UNB’s season, posting the third-best save percentage (.863) and the fourth-best goals against-average (0.60) in the country.