The most important seven letter word in sports, and the driving force behind all athletic competition. For the UBC varsity swim team, winning has become habitual because of the team’s intense desire to be the best.

The women’s team title was the fifth national championship banner in the last six years for the Thunderbirds, while the men’s team captured their third U SPORTS gold in six seasons. Success may breed complacency in some cases, but not for Thunderbirds head coach Steve Price.

“I always say winning the championships is hard, and defending is harder,” said Price, who was named men’s coach of the year for the second time in three years. “We’ve already had the debrief and are talking about next season. As we said this week, the road to the championships started last week.”

Yuri Kisil is one of Price’s star swimmers and a huge reason the Thunderbirds came away with a U SPORTS banner last month. Kisil racked up six gold medals at the meet, living up to his Olympic pedigree.

“Steve said he can almost guarantee other teams aren’t doing this. They don’t get right back at it, and I think that’s what sets us apart,” said Kisil. “You don’t want to take a break after the big competition ends and you already want to start working towards the next one.” 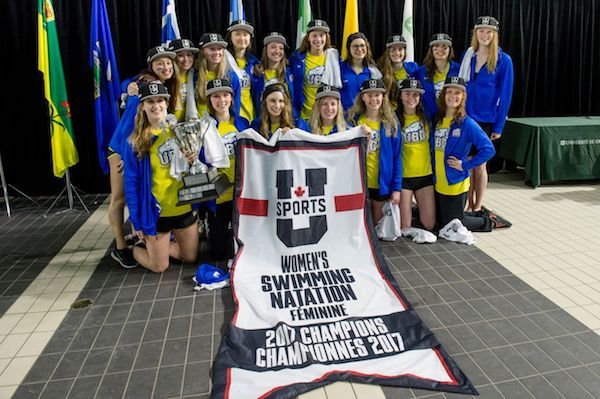 Erika Seltenreich-Hodgson is another UBC Olympian who came home with a pocket full of gold medals from Sherbrooke. She too believes that UBC’s winning culture is unique.

“That’s one of the things UBC prides itself on. Our minimum standard is winning. It doesn’t always happen and we know that if it doesn’t, we did everything that we could,” said Seltenreich-Hodgson, who earned five gold medals to go along with a pair of silvers. “Even if we don’t win, we’re leading the winning lifestyle.”

Outside of relays, the sport of swimming is intensely individual. It’s just you, your lane, and the clock. The team-centric atmosphere of the U SPORTS meet is something you won’t find anywhere else in the swim world.

“It’s refreshing getting that team atmosphere, seeing your teammates win makes you want to do better and up your game,” said Kisil. “Sharing that success with the people you train with every day and are some of your best friends is a really meaningful moment.”

Seltenreich-Hodgson feels the same way, even with her Olympic experience, stepping on the blocks at U SPORTS gives her a feeling she can’t get elsewhere.

“It transcends just racing for yourself,” said Seltenreich-Hodgson. “For once in my life I’m not racing for a spot or for myself – I’m doing it solely for the other ladies in the pool with me or on the side of the pool.”

The Thunderbirds were short-staffed going into the meet. Second-year Carson Olafson broke his wrist a week before competition in a biking accident, Olympian Emily Overholt’s nagging injury from throughout the season forced her to stay sidelined, and rookie Will Dickson remained out with a neck injury suffered skiing.

With some key names missing from the roster, the Thunderbirds knew their younger swimmers would have to step up.

Freshman Warren Mayer won gold in the 50m breaststroke, while on the women’s side, rookie Megan Dalke reached the podium four times over the course of the weekend. These are the swims you need to take home a U SPORTS banner.

“People stepped up and rallied around knowing a major part to the team wouldn’t be there,” said Price. “Instead of it being a liability we used it as a focus point to rally around and everyone stepped up.”

The women’s team was especially unique and inexperienced. The team had 10 rookies on it and it was up to Seltenreich-Hodgson to provide leadership to the young bunch.

“We did our best to provide support to them, but there is a learning curve, and they did so well,” said Seltenreich-Hodgson. “I think we came out on the other side of it as a significantly better team because of it.”

CONTINUING THE PATH TO EXCELLENCE

UBC is already looking towards next year, but the current swim season isn’t over. The Canadian trials for the 2017 FINA world championship this summer are taking place in their backyard in Saanich, B.C. from Thursday to Sunday and several Thunderbirds will be racing.

For Price, like every other varsity swim coach, his work year is only halfway done. If UBC wants to maintain its desired level of excellence, he needs to get the fastest swimmers to come swim for him and the Thunderbirds.

“Recruiting is a year-round job. We’re always looking for the next best kids down the road. It’s a constant process,” said Price. “You get a chance to win the university championships by the work you do in spring and summer and you have a chance to do well on the international scene based on the work you do in the varsity season – both complement each other well.”