QUEBEC CITY (U SPORTS) – Five national university records were set on the opening day of the 2022 U SPORTS Swimming Championships in Quebec City, confirming how fast the pool is at Laval University’s Centre aquatique Desjardins and the high level of the competition offered by the student-athletes on site. In the hunt for a sweep of both men's and women's banners for a fifth-straight season, the UBC Thunderbirds started strong on the men’s side, but are currently chasing after the Toronto Varsity Blues after the first 12 women’s events.

Rebecca Smith of the Calgary Dinos was the first recordwoman of the night, shaving over a second off her own U SPORTS record (1:54.85), winning the 200m freestyle final, the first of the night, in a time of 1:53.19. The 2020 Tokyo Olympic silver medallist later picked up her second title of the night, when she dominated the 100m butterfly final from beginning to end, touching the wall over three seconds ahead of her closest rival.

« Honestly, my team motivates me to perform every day. They are just so awesome, I just love being around them and it motivates me to go fast and make them proud, said the Calgary swimmer. It was my third race of the night, but I just wanted to leave it all in the pool for them. I just love the relays, we got a good place and everyone swam really well. » 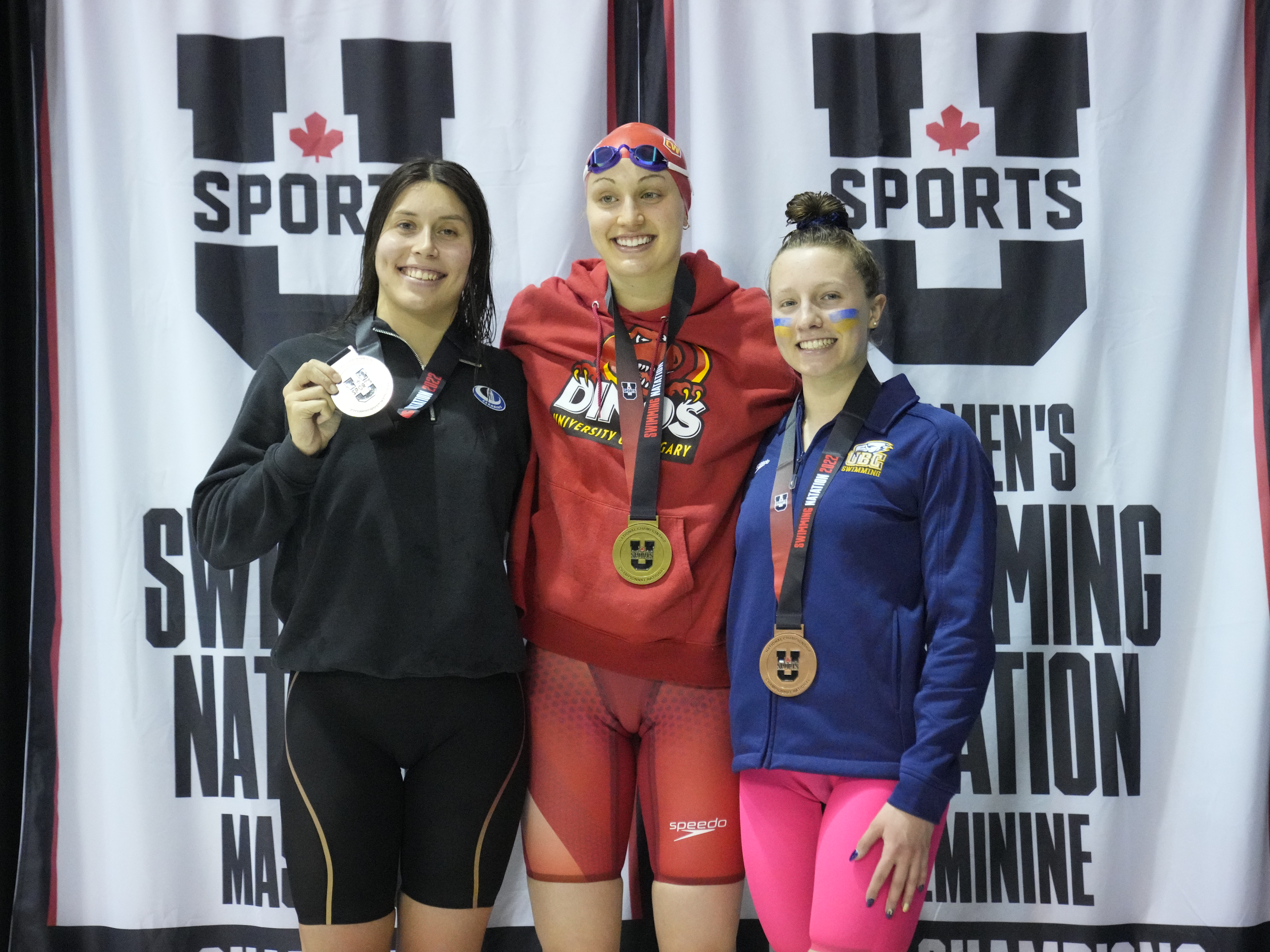 The record of the men’s 100m breaststroke was broken not once, nor twice, but three times on Thursday. First, in the heats, UBC’s Justice Migneault clocked in at 59.07 seconds. Gabe Mastromatteo bested that performance by 0.07 second in the following heat, then again later in the evening, when the U of T athlete dominated the final in 58.51.

« To be honest, I probably should wear contact lenses because I didn’t see it right away, but the gold colour stood out on the screen so I was excited, said Mastromatteo at the end of a busy opening day at the pool. I haven’t raced a short course in quite a while, like since 2020, so I was just looking to see what I could do and I was pretty happy about it ! »

Clément Secchi won the first RSEQ gold medal at these championships and he did it with flair. The McGill Redbird Frenchman stopped the clock at 50.99 seconds to win the 100m butterfly final, improving the record held by Coleman Allen (51.19, 2015).

NOTES: The 2022 U SPORTS Swimming Championships resume on Friday with the heats starting at 10 a.m. while the finals will begin at 6 p.m… The preliminary heats can be followed live each morning on U SPORTS’ Facebook page while the finals are on CBC Sports’ platforms... Results and start lists are available here.

2022 U SPORTS Swimming Championships Preview: Thunderbirds on the “Drive for Five”