For high jump gold medalist, Danielle Delage, it was how the athletes contributed as a team each of those years that made it that much more special.

“It’s amazing to get the three-peat, it’s so great how we come together,” Delage says. “The first year was overwhelming for me, last year was such a great team, and this year was definitely really special being my last year to compete at this level.”

Graduating from the kinesiology program this spring, Delage has reached the podium at each of the last three U SPORTS Championships, ending her university career on top with gold. A former pentathlete, Delage earned a silver and bronze in the high jump while also earing a second-place finish in the pentathlon. The transition to becoming a full-time high jumper has helped her mentally and physically these last two seasons.

“High jump was the event that I liked best out of the (pentatlon),” Delage explains. “When I did the pent, I would sometime get injured and take time off, but now it feels good to put all my efforts into one event. Winning the gold this year kind of re-affirmed that decision.”

With her podium finishes the last three years, Delage and head coach Carl Georgevski believe that there are many factors that go into each championship. 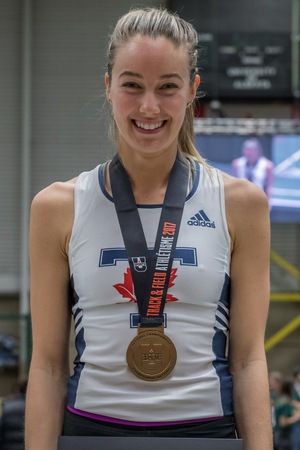 The trio of championship titles will help continue to grow the team heading into the future. Over the last three years, the Varsity Blues have lost and gained talented athletes, while maintaining the level and culture that is needed to win three banners in a row.

“It’s a vision of the program and what’s truly possible for them to achieve both academically and athletically,” Georgevski says. “We use the OUA and U SPORTS (Championships) as stepping stones to something beyond. There are some great programs across the country and it’s very competitive.”

When asked about his third consecutive Sue Wise Award for Coach of the Year, Georgevski emphasizes that he is not alone. Like the championship titles the women’s team has won over the last three years, Georgevski believes it’s a team contribution.

“There is no such thing as Coach of the Year, its Coaching Staff of the Year,” Georgevski says. “The head coach is only as good as the people that he or she surrounds themselves with. It’s not me that coached every single athlete – it’s the collective, and I have some incredible men and women on my staff.”