The stage is set for the U SPORTS football national semifinals on Saturday, when the last four teams still standing will battle for a berth in the ArcelorMittal Dofasco Vanier Cup, scheduled for Nov. 25 at Tim Hortons Field in Hamilton.

Both contests will be televised live on Sportsnet 360 and TVA Sports 2, with coverage beginning on both networks at noon Eastern with a 30-minute pre-game show. The doubleheader is also available online through Sportsnet NOW and TVASports.ca.

The ArcelorMittal Dofasco Vanier Cup follows on Saturday, Nov. 25 at 1 p.m. ET / 10 a.m. PT at Tim Hortons Field in Hamilton... For all the information on the 53rd Vanier Cup, visit vaniercup.com. Tickets are available at ticketmaster.ca, starting at $25.

If Saturday’s games produce half of the drama witnessed during the conference finals – all won by the home side - fans across the country are in for a treat.

While Western soundly defeated Laurier 75-32 in the Yates Cup to avenge a heartbreaking loss to the Golden Hawks in last year’s OUA championship match, Acadia needed overtime to edge Saint Mary’s 45-38 in the Loney Bowl, Calgary escaped with a 44-43 Hardy Cup victory over UBC thanks to a U SPORTS-record 59-yard field goal on the final play of regulation, and Laval downed Montreal 25-22 as, for the fifth year in a row, the Dunsmore Cup final between the RSEQ archrivals was decided by three points or less.

The Western-Acadia matchup in the Uteck Bowl will bring back memories to long-time university football followers. The two storied programs squared off in three Vanier Cup finals over a span of four years in the late 1970s and then battled in a pair of Atlantic Bowls in Halifax in 1986 and 1995, with the Mustangs winning four of the five contests.

The most recent head-to-head meeting 22 years ago at Huskies Stadium remains the highest-scoring national semifinal in history (55-45 Western) and one of only two national Bowl games to be decided in extra time.

Most observers agree that, at least on paper, the Mustangs go into Saturday’s reunion as overwhelming favourites, despite the fact the Axemen are undefeated this fall at historic Raymond Field, which has previously been the site of only one U SPORTS semifinal since it opened in 1966, a 38-13 Acadia loss to Calgary back in 1975.

The only remaining undefeated team in the country this fall, Western dominated their opponents by an average of 35.2 points during the regular season before crushing Guelph and Laurier by 54 and 43, respectively, in the OUA playoffs. Guelph had been the only team to give the London powerhouse a scare during the regular schedule, taking the Mustangs to overtime in Week 2.

Despite this overwhelming domination, long-time bench boss Greg Marshall and his troops face a unique challenge this week as their Uteck Bowl opponents were only confirmed on Tuesday afternoon.

“We had watched a lot of film on Acadia on Sunday morning, and then Sunday night when that ruling came down we kind of started looking at Saint Mary’s, We’ve been kind of splitting up [our time] but Acadia’s a well-coached team. They play solid defence, they like to run the football and throw some play-action passes, they’re a good overall football team. 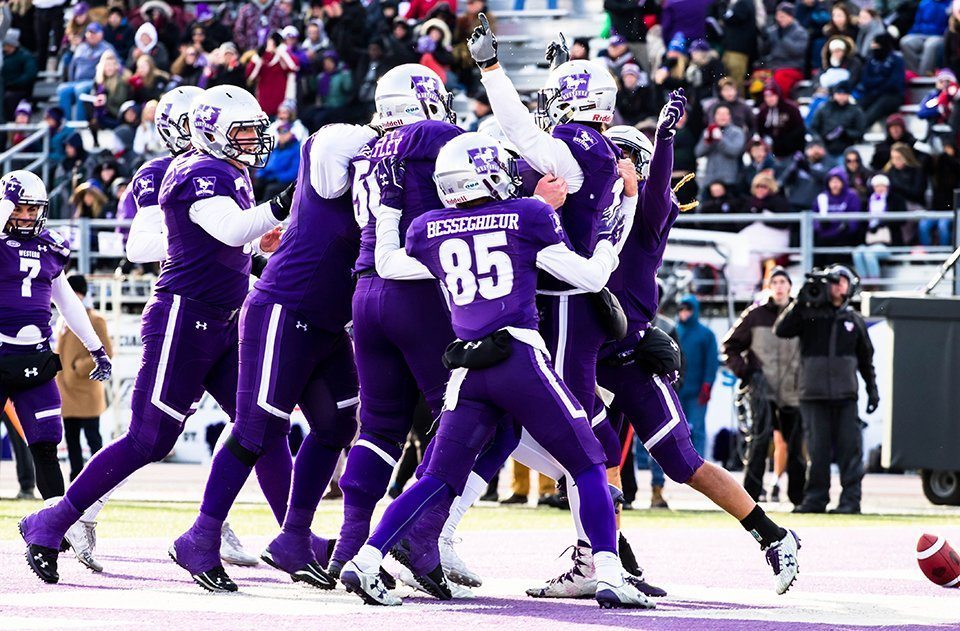 Among the innumerable weapons Marshall has at his disposal is third-year running back Cedric Joseph, who had a 250-yard, three-touchdown performance last Saturday to help Western score a Yates Cup-record 75 points. The Montreal native led the country with 10 rushing majors during the regular season and has added a whopping seven in two playoff outings.

“I’m excited. They look like a pretty solid team, they look like they’re very consistent, and well-coached,” said Joseph, whose 578 rushing yards in conference play were second on the team to Alex Taylor’s 831. “I’m excited to get in the film room and start breaking them down a little bit. Obviously, it’ll be fun to take a flight out there with the boys to be able to enjoy a nice little business trip and take care of business this weekend.”

At the other end of the field, Acadia counters with a solid defensive unit that topped the AUS in total yards (375.5) and rushing yards (117.3) allowed per game during the regular season. On offence, the Axemen boast the nation’s fourth-best rushing attack with a conference-leading 208.3 yards per contest, led by league MVP Dale Wright, who became only the second player in school history to rush for over 1,000 yards. 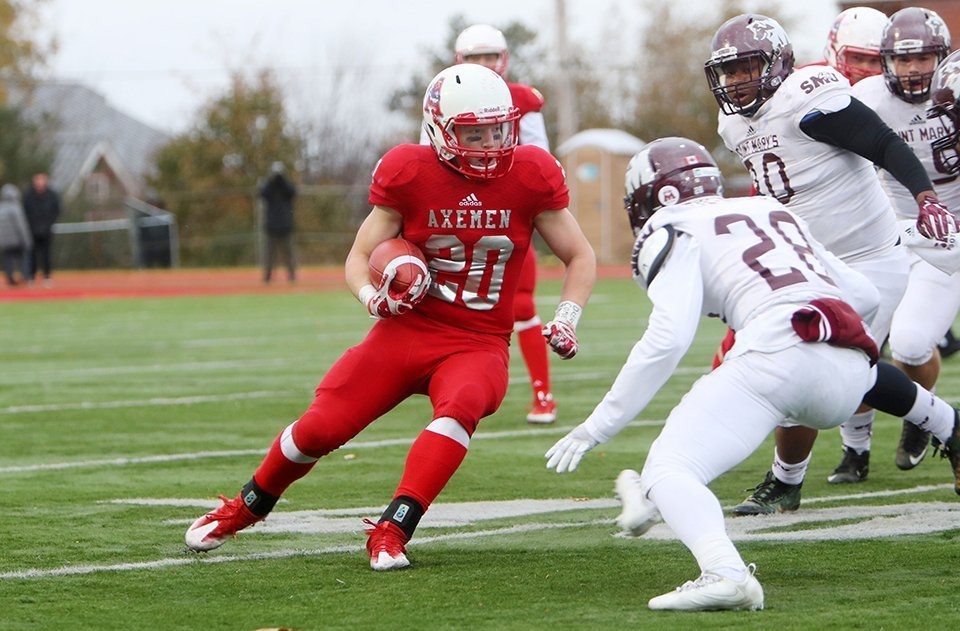 Winners of five straight since a loss to Saint Mary’s that dropped their record to 2-2 in mid-September, the AUS champs also tied for second in the country in league play with 14 interceptions. They added no less than four picks in their thrilling Loney Bowl triumph, including a pair by Rory Kelly, who sealed the win when he stepped in front of a pass in his own end zone on the Huskies’ second shootout series.

On Saturday, the Axemen hope to put an end to a streak of seven consecutive losses in national semifinals since their last trip to the Vanier Cup in 1981. Their last four U SPORTS Bowl appearances have come under Jeff Cummins, who is completing his 15th campaign at the helm.

I’m very proud of my team and the way they battled through this game versus a very tough opponent, Now we are off to another really good team, one that broke a scoring record in their championship game. We are excited about what the next three days have in store for us and believe that by Saturday we will be ready to go.

Running back Cameron Davidson unexpectedly moved up the depth chart in the AUS final after Wright went down early with an injury. The senior from Kentville, N.S., made the most of his opportunity, racking up 152 yards on 22 carries en route to game-MVP honours.

“Absolutely surreal. Growing up locally and watching the team play, it’s been a dream of mine for as long as I can remember. Doing it with this group of guys and in front of our amazing fans in Wolfville is and will forever be one of the best moments of my life,” Davidson said.

While the Mustangs and Axemen are set to rekindle an old rivalry in Wolfville, it will be déjà vu all over again in Calgary, where the Rouge et Or and Dinos will meet on the national stage for the sixth time in 10 years.

Laval’s domination of Calgary since the two perennial contenders first battled in 2008 has been well documented. Thanks to a 31-26 come-from-behind victory in last year’s Vanier Cup, the Rouge et Or lead the all-time head-to-head series 5-0, including a convincing 41-10 Mitchell Bowl win in the only previous duel at McMahon Stadium, in 2011. 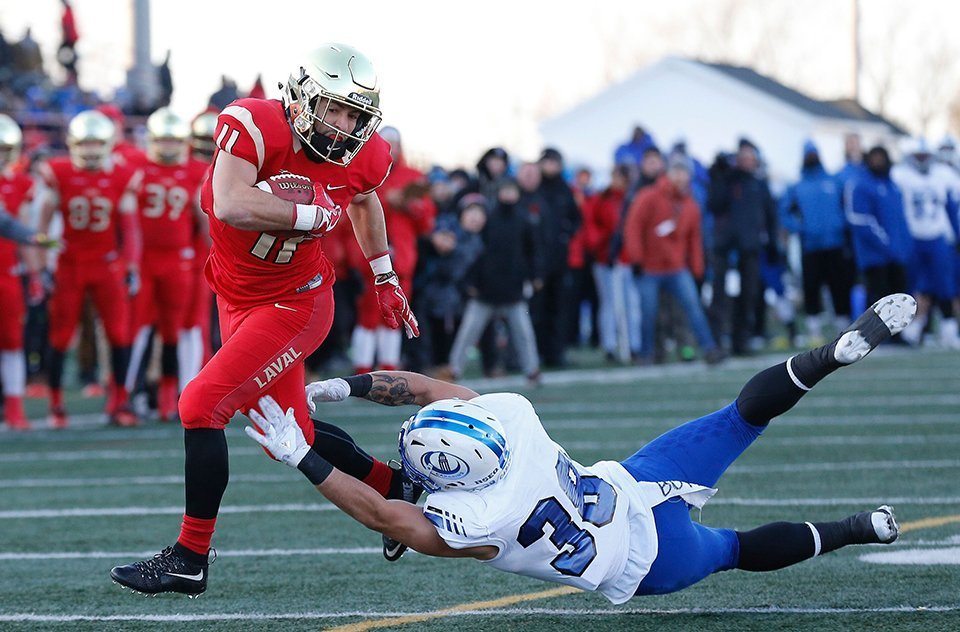 Of course, the Dinos can take comfort in the fact they’re not the only team that has struggled to solve the Laval mystery. The Quebec City powerhouse hasn’t lost to an opponent other than Montreal since the 2011 Vanier Cup against McMaster, which remains the record-setting program’s only setback in 10 appearances in the U SPORTS championship match.

Laval and Calgary have had similar results so far in 2017, both finishing atop their league standings with 7-1 marks before notching emotional wins over their respective archrivals, Montreal and UBC, to claim yet another conference banner. But the way they’ve achieved success has been somewhat different.

As has been the case for the better part of the past two decades, the Rouge et Or have dominated mainly thanks to a suffocating defensive unit that ranked first in the nation during the regular season in points allowed (9.6 per game), finished second in overall defence (304.8 yards per game) and against the run (99.4), and was fourth against the pass (205.4).

The high-flying Dinos, meanwhile, can go toe-to-toe with the best of them on offence. They finished second in the country in both points scored (42.5 per game) and passing yards (347.6), while taking third place in total yards (507.0). 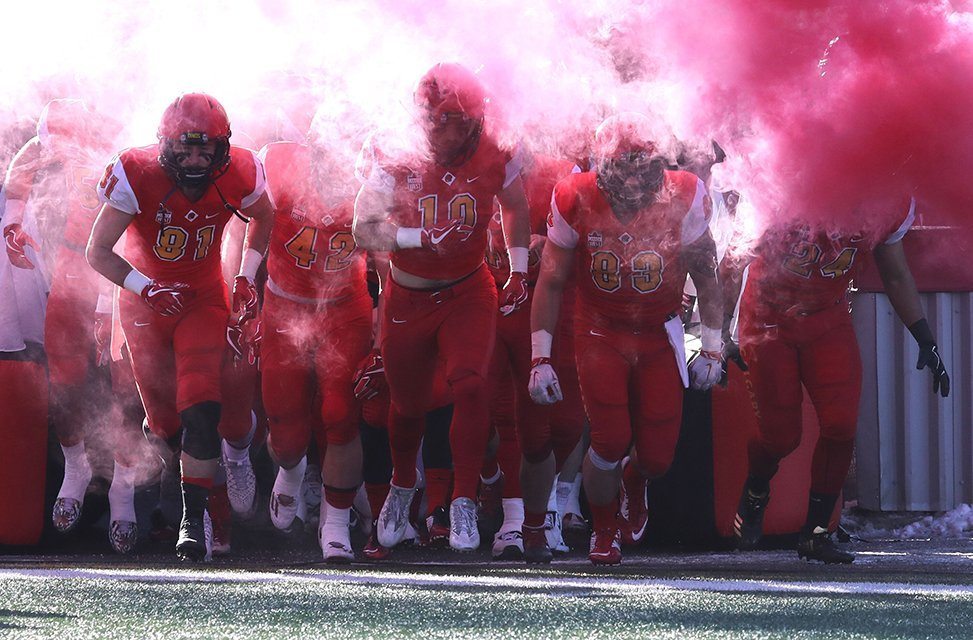 “We’ve had success in all three phases of the game this year, and that's probably why we’re in the national semifinals,” said Laval’s Glen Constantin, the leader among active U SPORTS head coaches with a mind-boggling 164-30 career overall record in 17 seasons at the helm, including 9-4 in Bowl games and 8-1 in Vanier Cup finals. “I am particularly pleased with the way our defence has played in recent weeks. We feel we have managed to develop a good synergy between our line and our secondary, which allows us to make big plays both against the run and the pass.”

Led by defensive end Mathieu Betts, the Dunsmore Cup MVP with two sacks and a forced fumble, Laval has registered an impressive three shutouts in its last six contests. On offence, fourth-year quarterback Hugo Richard, the 2016 Vanier Cup MVP and now a two-time RSEQ player of the year, completed a U SPORTS-best 70.3 per cent of his passes in league play and threw only three interceptions in 269 passing attempts.

“Outside of our conference, Calgary is the team we’ve faced the most in the last 10 years, so we’re starting to be familiar with them,” continued Constantin, whose troops also hosted the Dinos in preseason action in 2013 and 2014. “Despite the fact we’ve had success against the Dinos, we must always be well prepared because they are an excellent football team, very well coached. It’ll be a big challenge, especially since we have to cross the country to play them on their home turf. I’m expecting a great game.”

“It will be a big challenge for us to be able to keep our focus while traveling out West,” added Betts, last year’s J.P. Metras Trophy recipient as the nation’s outstanding down lineman. “Obviously, these are never easy games. The preparation is very important because we’re not as familiar with their trends and their players. It’ll be the exact opposite of the Quebec final, as we played Montreal three times this fall.”

In his third season at the helm, U of C head coach Wayne Harris Jr. likes what he’s seen from his team since the emotional Hardy Cup win against UBC, which ended on the miraculous 59-yard kick by new YouTube sensation Niko DiFonte, who also became the first player in Canadian university football annals with six field goals in back-to-back games.

“We spoke to it Sunday, said we’ve had our celebration and now it’s time to refocus on our next game,” commented Harris, a long-time Calgary assistant coach who claimed his first Bowl victory as sideline boss a year ago against StFX,  at McMahon Stadium. “That’s what’s important right now – they’re into that, they look focused, and now we’ll start preparing like we do for any opponent.”

One player who has been focused all season is second-year pivot Adam Sinagra. In his first full campaign as the Dinos’ starting quarterback, the product of Pointe Claire, Que., passed for 2,447 yards and 18 touchdowns in eight league games before adding 801 yards in two post-season contests.

“Every year is a new year, but we have an experienced group of players, a lot of whom have played Laval twice,” added Harris, who hopes his team can add to Canada West’s stellar 19-3 home record in national Bowl games. “It’s getting the younger guys understanding that it’s again a full 60-minute commitment, and that’s what it’s going to take to beat one of the best programs in the country. We can’t let our guard down for a second.”

Senior linebacker Micah Teitz is ready for this latest chapter of the Calgary-Laval rivalry.

We’re confident – we have a great game plan from the coaches, and we’re going to go in and play our best game.