The Laval Rouge et Or will get the chance to play in the Vanier Cup championship game on home turf next week thanks to a resounding 63-0 Uteck Bowl triumph over the visiting St. Francis Xavier X-Men in the first U SPORTS football national semifinal, Saturday afternoon at TELUS-UL Stadium.

In the 54th Vanier Cup, presented by Promutuel Insurance, next Saturday at 1 p.m. Eastern Time (10 a.m. Pacific), second-ranked Laval (11-0) will host either the No. 6 Saskatchewan Huskies (7-3) or the No. 1 and reigning national champion Western Mustangs (10-0), who face off later Saturday in the Mitchell Bowl in London, Ont.

Fifth-year Laval quarterback Hugo Richard earned game-MVP honours after he completed 22 of 27 passes for 327 yards and five touchdowns in just over one half of action.

Three of his TD tosses went to Vincent Forbes-Mombleau, the RSEQ rookie of the year, who led all receivers with nine catches for 104 yards. 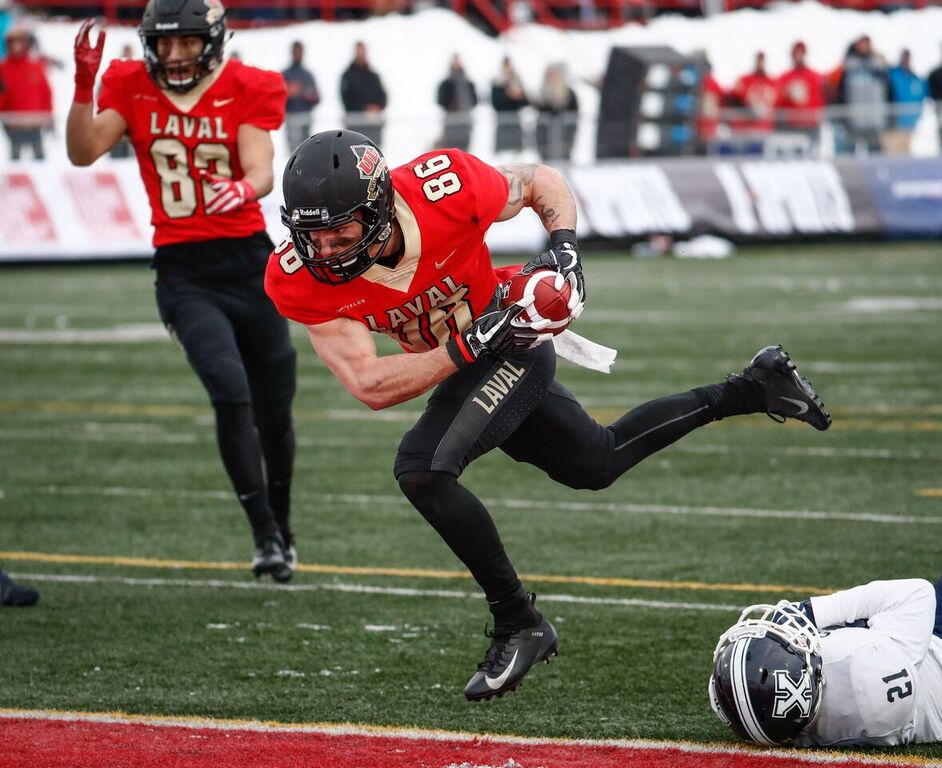 “We’re playing really well since the start of the playoffs,” said Richard, the 2016 Vanier Cup MVP, who was taken out of the game after the Rouge et Or made it 46-0 with a rushing major on their first offensive series of the third quarter. “I have confidence in our offence and our O-line is awesome. We’re well prepared and the team spirit is great.”

According to winning head coach Glen Constantin, the game plan was to attack StFX’s pass defence.

“We saw on film that their pass defence could be exploited and once we got a comfortable lead, we were able to run the football. We weren’t expecting an easy game. It’s hard to evaluate, intensity is a big factor. We were expecting more from their rushing attack.”

StFX head coach Gary Waterman could only tip his hat to a talented opponent.

“We have to give it to them. Their execution was almost perfect. It’s a tough loss for us but I’m proud of my players, they never quit.”

The Quebec conference champions struck early an often against their AUS counterparts, jumping to a 16-0 lead after the first quarter en route to a 39-0 advantage at halftime.

On Laval’s first two possessions, Richard hit Forbes-Mombleau for a 15-yard score 6:07 into the contest and Mathieu Robitaille from 28 yards out to make it 14-0 at the 9:08 mark.

The Rouge et Or defence then forced the visitors to concede a safety and put the exclamation point on a first quarter in which they held the X-Men to one first down and 27 yards of offence.

It was much of the same in the second stanza, with the exception of a crazy sequence where the two teams exchanged four straight turnovers, including a pair of Laval miscues in the red zone.

Following a 14-yard TD pass from Richard to Forbes-Mombleau that made it 23-0, teammate Kevin McGee picked off Wasdal at the StFX 35-yard line but that play was nullified a few moments later when Gordon Whyte intercepted Richard at his own 8-yard line. Zack Fitzgerald got the ball right back for the locals with an interception at midfield which he returned on 42 yards but once again, the Rouge et Or failed to capitalize when Richard fumbled at the goal line.

Things then got back to normal, however, and Laval piled up 16 more points in the final two and a half minutes before the break on a safety and Richard’s fourth and fifth TD passes of the afternoon, a 15-yarder to Mombleau and a spectacular 24-yard strike on the run to Benoit Gagnon-Brousseau.

The second half was dominated by Laval’s rushing attack featuring backup running back Alexis Côté, who racked up 207 yards and three touchdowns on 23 carries after the break.

StFX running back Jordan Socholotiuk, who led U SPORTS in rushing during the regular season with 1,009 yards in eight games, was held to 43 yards on 18 carries, while AUS MVP Kaion Julien-Grant was limited to 29 yards on three receptions.