They are the two most decorated programs in Canadian university football history and, almost a decade after they first battled for U SPORTS supremacy in Hamilton, one of them will add to its impressive trophy collection following the 53rd ArcelorMittal Dofasco Vanier Cup on Saturday.

Kickoff for the championship game between the undefeated Western Mustangs (11-0) and the defending national champion Laval Rouge et Or (10-1) is set for 1 p.m. Eastern at Tim Hortons Field, which hosts the event for the second straight year.

Television coverage on Sportsnet 360, Sportsnet ONE and TVA Sports gets underway with pre-game shows at 12:30 p.m. The broadcast is also available online through Sportsnet NOW and TVASports.ca.

It is the very definition of a heavyweight bout.

In the red corner, Laval comes in as the top-ranked team in the nation, holds the record for most Vanier Cup victories (9) and ranks second all-time in Vanier Cup appearances (11 including this year).

In the purple corner, No. 2 Western comes in as the only undefeated team in the country in 2017, is set to make its record 13th trip to the championship match, and ranks second in number of national titles (6).

The main difference between the perennial contenders? While the Rouge et Or have captured all of their U SPORTS banners since 1999, the Mustangs’ last triumph dates back to November of 1994... a few months before the Laval program was officially launched with an exhibition season the next fall. 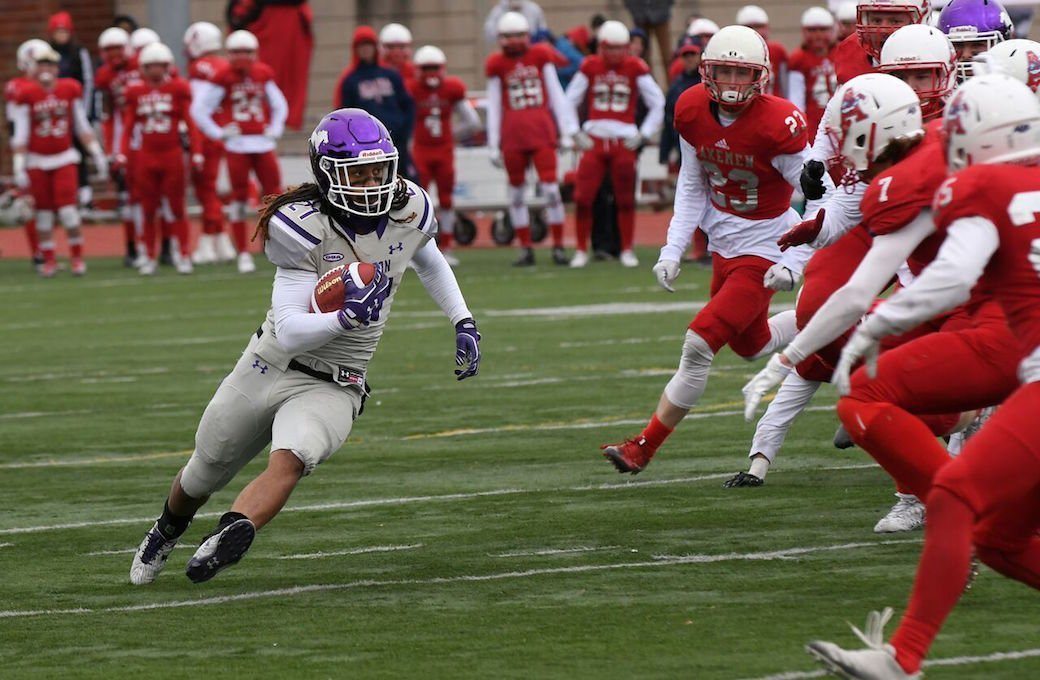 Adding to the hype surrounding Saturday’s duel is the fact the confrontation promises to be a classic battle between Laval’s top-ranked defence (9.6 points allowed per game in conference play) and Western’s No. 1-ranked offence (48.3 points & 608.5 yards per game).

Not surprisingly, both head coaches have nothing but the utmost respect for their upcoming opponent.

“Obviously, there’s something extra special about playing Western. They have a great football program, especially thanks to their coach Greg Marshall,” says 17-year Laval mentor Glen Constantin, who has claimed more Vanier Cup titles than any other bench boss in history, with eight, including last November’s memorable 31-26 come-from-behind win over Calgary at Tim Hortons Field. “He’s someone I respect a lot, a great builder, a great leader and a good friend, and it’s a privilege to be able to go up against him.”

Obviously, there’s something extra special about playing Western. They have a great football program, especially thanks to their coach Greg Marshall. He’s someone I respect a lot, a great builder, a great leader and a good friend, and it’s a privilege to be able to go up against him.

“Laval’s a good football team, and of course they’ve got a lot of experience in the Vanier Cup that they’ll bring with them to this year’s game,” offers Marshall who, in his 18th campaign as a university head coach including the last 11 with the Mustangs, is still looking for that elusive first national crown. “We’re expecting a hard-fought game, they’re going to be the most complete team we’ve faced all year. There are no holes in their armour. We know that we’ll need to play our best football of the season to come out on top, and we’re excited to get on the field this Saturday to play for the national title.” 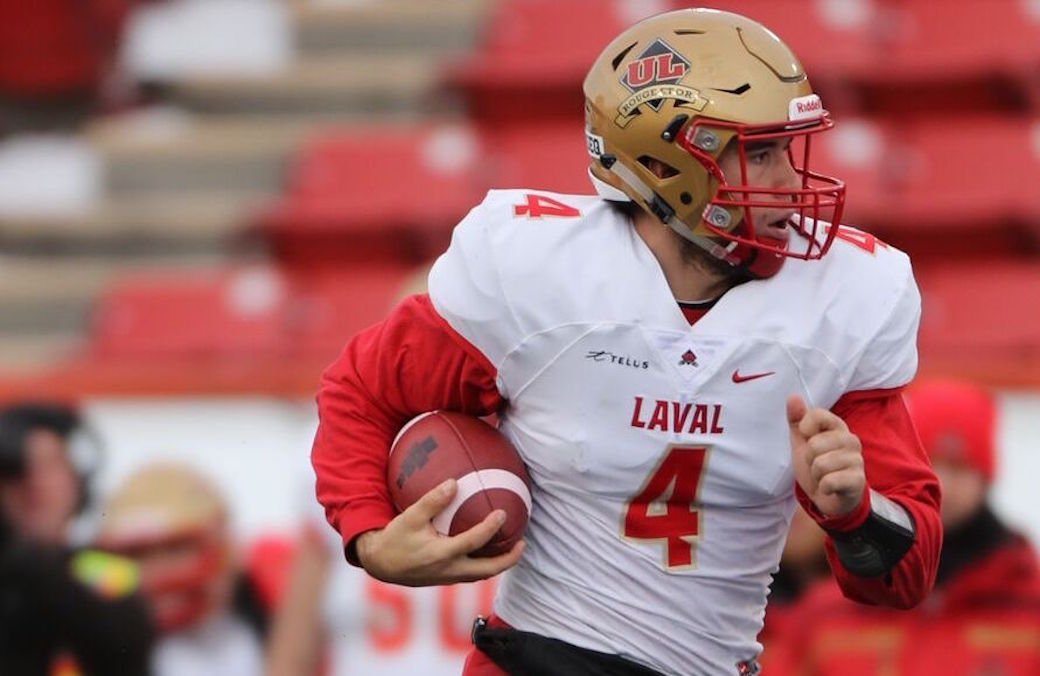 While Western has rolled over its playoff competition so far, scoring a ridiculous 222 combined points in three games and setting all-time records for most points in the Yates Cup (75) and in a national semifinal (81), Laval is battle-tested following a narrow 25-22 Dunsmore Cup win over archrival Montreal and a stressful 35-23 Mitchell Bowl victory against Calgary, a contest the Rouge et Or were leading by only five points until the dying moments.

We’re expecting a hard-fought game, they’re going to be the most complete team we’ve faced all year. There are no holes in their armour. We know that we’ll need to play our best football of the season to come out on top, and we’re excited to get on the field this Saturday to play for the national title.

Constantin sees some good in both situations.

“There are advantages in both. When you dominate so early in a game, it gives you the opportunity to rest some key players for the championship match. On the other hand, when you’re involved in games that are decided at the very end, you gain the experience of adversity, and that’s definitely not negligible. I like having experienced that kind of adversity during our playoff run.” 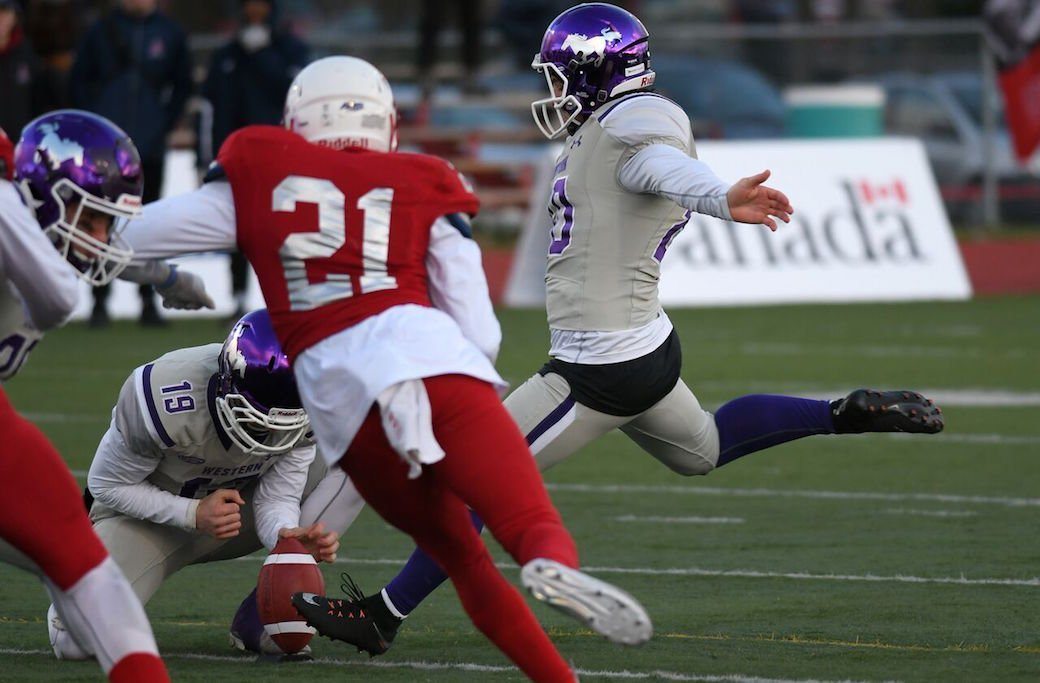 Leading the way for the formidable Laval defence is a foursome of RSEQ conference all-stars comprised of defensive end Mathieu Betts, tackle Vincent Desjardins, linebacker Adam Auclair and halfback Gabriel Ouellet, all first-time Vanier Cup winners a year ago. In addition to allowing the fewest points in the country during the regular schedule, the stingy unit ranked second in the nation in total yards allowed (304.8 per game), second against the run (99.4) and fourth against the pass (205.4).

Betts, last year’s U SPORTS outstanding down lineman who is again up for the award this season, is enjoying a remarkable playoff run with six sacks in three contests, two in each game. Ouellet, who tied a national mark earlier this fall with four interceptions in a single match against Montreal, had a key pick at his own two-yard line in the Mitchell Bowl and scored a game-changing touchdown off a fumble recovery on the first play of the fourth quarter.

On offence, 2016 Vanier Cup MVP Hugo Richard is a seasoned veteran in his fourth campaign under centre. The now two-time RSEQ player of the year, who completed a national seasonal-high 70.3 per cent of his passes in league play, was named Mitchell Bowl MVP after he went 21-of-32 for 258 yards, no interceptions and a pair of touchdowns against Calgary, including a perfect 54-yard strike to favourite target Jonathan Breton-Robert late in the first half. 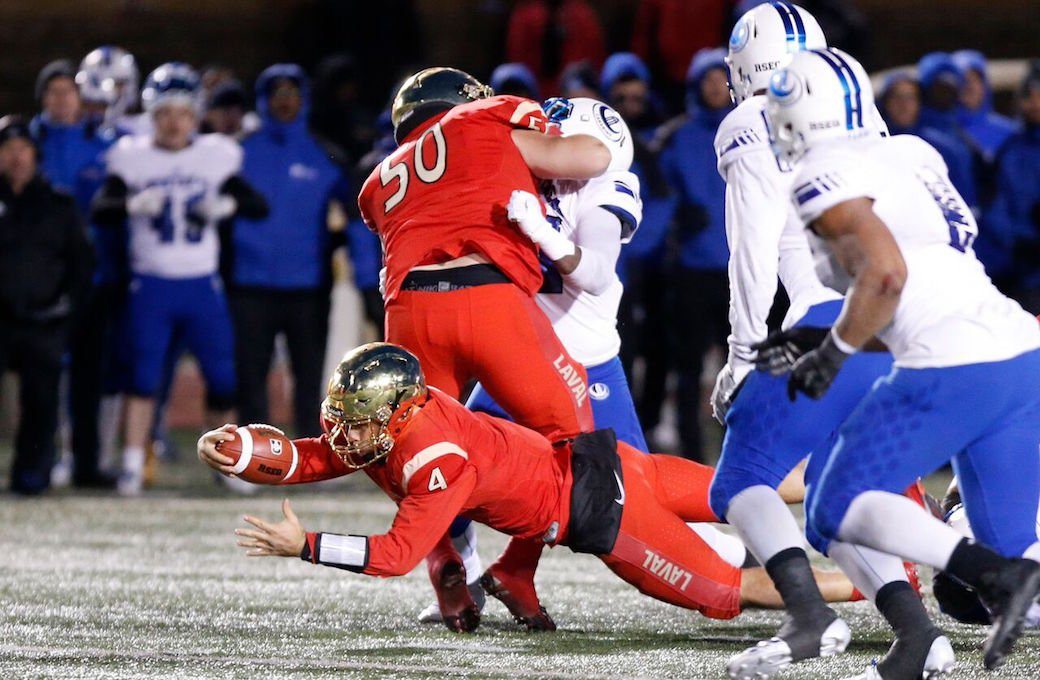 During the regular season, the Rouge et Or were first in Quebec in points scored (33.3) and rushing yards (160.3) per game.

“There’s a lot of hype around Western’s offence, but their defence is also a big part of their success. They ranked second behind us in points allowed,” says Richard, who was 25-of-32 for 339 yards and two majors in last year’s Vanier Cup, while also scoring the game-winning touchdown on a one-yard run late in the fourth frame. “To have success against them, we’ll need to stick to the same recipe: move the ball well, keep mistakes to a minimum, avoid turnovers and give our team good field position.

They have a great offence but we also have a solid defence that showed lots of character against Calgary last Saturday. If our defence contains Western the same way and our offence puts points on the board, I think we’ll put ourselves in a good position to win.

Defensive end Edward Godin, one of only two fifth-year seniors – along with offensive lineman Louis-Gabriel Beaudet - who were also part of Laval’s 2013 Vanier Cup triumph, hopes his final university game will also end in celebrations.

“They run the ball very well and their offensive line is outstanding. They’re big, so we’ll have to be physical at the point of attack,” says Godin, who also had two sacks in the Mitchell Bowl win. “We’ll have to find our keys, stay disciplined, and make our tackles.”

On the other side of the field, Western’s domination this season has been well documented.

After leading the country with 48.3 points per game and prevailing by an average of 35.2 points in league play, the Mustangs have somehow managed to turn it up a notch in the playoffs, crushing Guelph 66-12 and Laurier 75-32 to capture their first conference banner since 2013, before pulverizing Acadia 81-3 last weekend to book their ticket for the Vanier Cup.

Western’s offensive performance in the Uteck Bowl was nothing short of mind-boggling, especially in the opening 30 minutes. Before resting a number of starters in the second half, the OUA champions scored touchdowns on each of their first eight possessions of the contest, before taking a knee as time expired on their ninth and final series before the break. 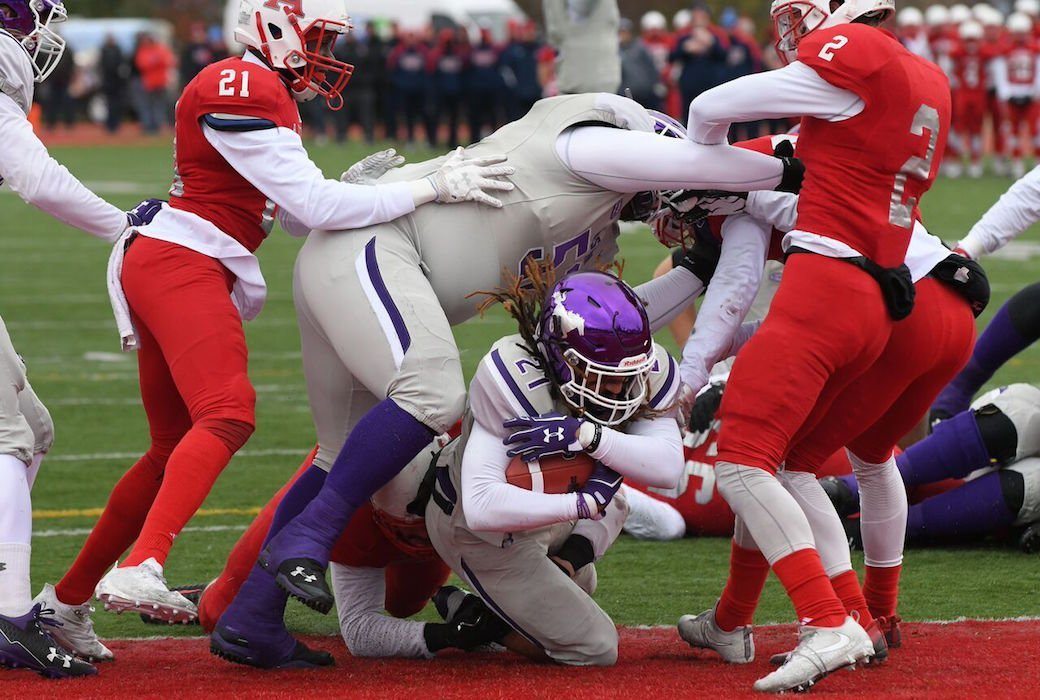 The nation’s best rushing attack in the regular season (309.9 yards per game) racked up an astounding 454 against the Axemen, including a game-high 172 yards on 15 carries by Trey Humes, 100 on 13 runs by Cedric Joseph and 98 on 15 carries by Yannick Harou.

Despite being taken out of the game early for the third straight post-season contest, Joseph found the end zone three times and now has a remarkable 10 rushing touchdowns in the playoffs, after topping U SPORTS with 10 during the regular schedule.

Quarterback Chris Merchant, in his second campaign with the team after transferring from the University of Buffalo, completed 10 of 11 passes for 200 yards, two TDs and no interceptions in two quarters of work, which was enough to merit game-MVP honours. The all-conference pivot also added a pair of majors on the ground and 54 yards on only six carries.

Joseph, a junior from Montreal, and Harou, a fifth-year senior from Gatineau, are two of 11 Quebec-born players on the Western roster, a group that also includes linebacker Jean-Gabriel Poulin of St. Nicolas and guard Grégoire Bouchard of Chicoutimi, both named OUA all-stars this fall. 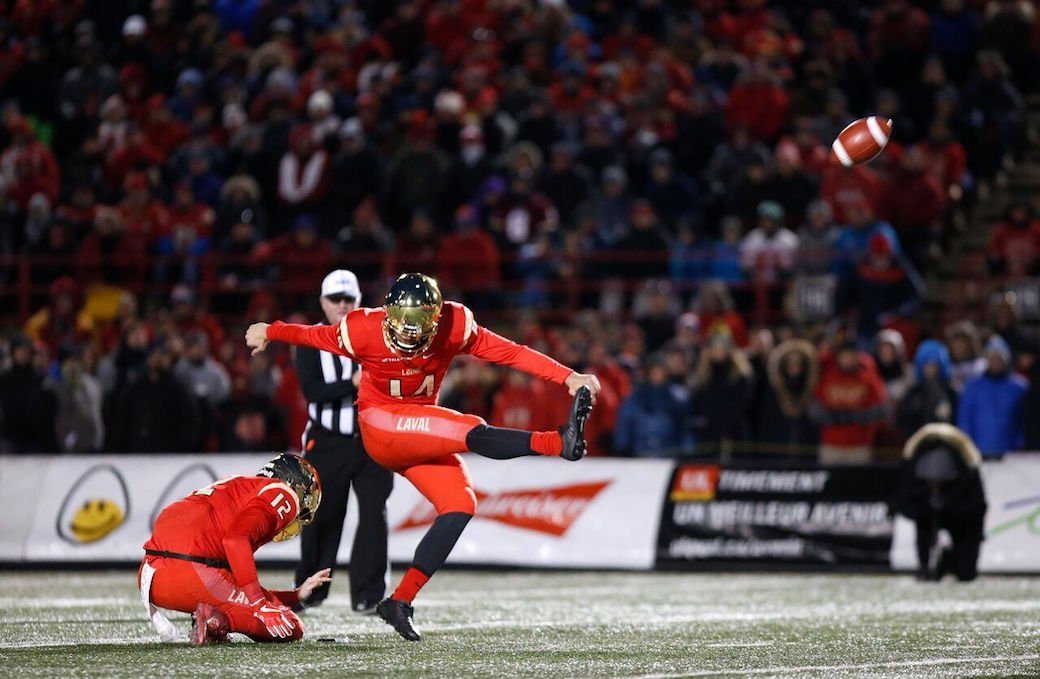 Poulin, a fourth-year veteran who was a teammate of Laval QB Hugo Richard at Vanier College in Montreal, is the leader of a defensive unit that is often overshadowed by the Mustangs’ offensive brilliance, but finished first in the country in total yards allowed (288.0 per game), second in points (13.1) and against the pass (188.4), and third against the run (99.6).

“Overall, I think it’s a result of the team being prepared and doing the work during the week leading up to a game,” says Joseph, who has been Western’s number one ball-carrier since a knee injury suffered by standout Alex Taylor late in the regular season. “And for me specifically, I have to give it up to my o-line, they make my job a heck of a lot easier and are one of the most dominant lines in the country.”

Overall, I think it’s a result of the team being prepared and doing the work during the week leading up to a game. And for me specifically, I have to give it up to my o-line, they make my job a heck of a lot easier and are one of the most dominant lines in the country. 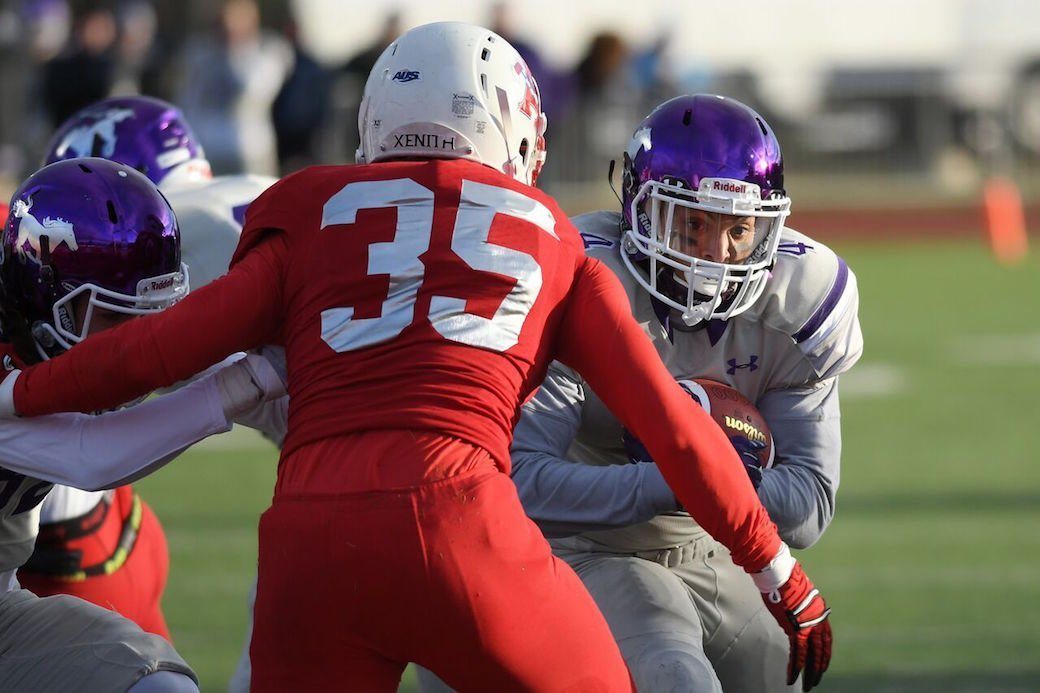 The last word goes to Greg Marshall, himself a former standout running back who won the Hec Crighton Trophy with Western back in 1980. The long-time mentor was the Mustangs offensive coordinator when they last popped the champagne 23 years ago.

“Bringing a Vanier Cup back to London would be very special,” says Marshall, who had head coaching stints with a pair of Hamilton-based teams -- the McMaster Marauders (1997-2003) and the CFL’s Tiger-Cats (2004-2006) – before returning to his alma mater in the fall of 2006. “I’ve been involved with the program for a long time and I remember what it was like when we won the title back in 1994. This is a special group we’ve got here and it would be great for them to have the experience of winning the Vanier Cup and bringing that trophy back to campus.”

53rd VANIER CUP: A LOOK AT THE CONTENDERS