It’s become an annual right of passage for the Laval Rouge et Or – a trip to the Vanier Cup. And for the 11th time in program history, the Canadian university football powerhouse is headed to the U SPORTS football national championship game, after downing the Calgary Dinos 35-23 in Saturday’s U SPORTS Mitchell Bowl at McMahon Stadium.

Laval will now meet the undefeated Western Mustangs on Saturday, Nov. 25 at Hamilton’s Tim Hortons Field in the 53rd ArcelorMittal Dofasco Vanier Cup, after Western’s decisive 81-3 victory over the Acadia Axemen in the Uteck Bowl Saturday in Wolfville, N.S. 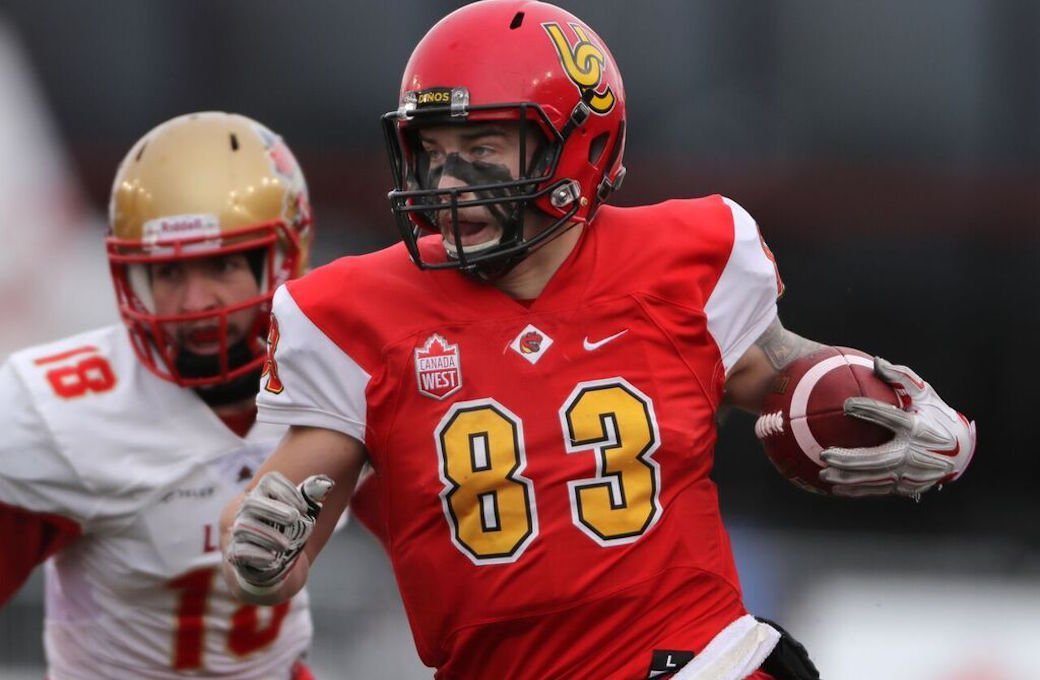 Laval’s win marked the second consecutive year Calgary’s season ended in heartbreak to the Rouge et Or, after the Quebec champions earned a 31-26 win over the Dinos in last year’s Vanier Cup. Saturday’s result also marked the sixth time in as many national playoff matchups that Laval emerged victorious over Calgary, and the second time the Rouge et Or managed a win in the Stampede City after Laval’s 41-10 win over Calgary in the 2011 Mitchell Bowl.

We’ve seen adversity, and I hate to do this, but you have to give a little bit of credit to the University of Montreal. They’re a tough opponent and we face them three times a year, so it keeps us prepared for adversity in big games like this.

“We’ve seen adversity, and I hate to do this, but you have to give a little bit of credit to the University of Montreal,” said Laval quarterback Hugo Richard, who was named the game’s MVP and helped lead Laval to a 25-22 win over Montreal in last week’s Dunsmore Cup. “They’re a tough opponent and we face them three times a year, so it keeps us prepared for adversity in big games like this.”

Just like last year’s Vanier Cup, Calgary headed into the half with a 17-10 lead, intent on ending their winless skid against the nation’s top team. But as was the case in 2016 when Laval used 21 second half points to claim their ninth national title, the Dinos couldn’t find a way to close it out. 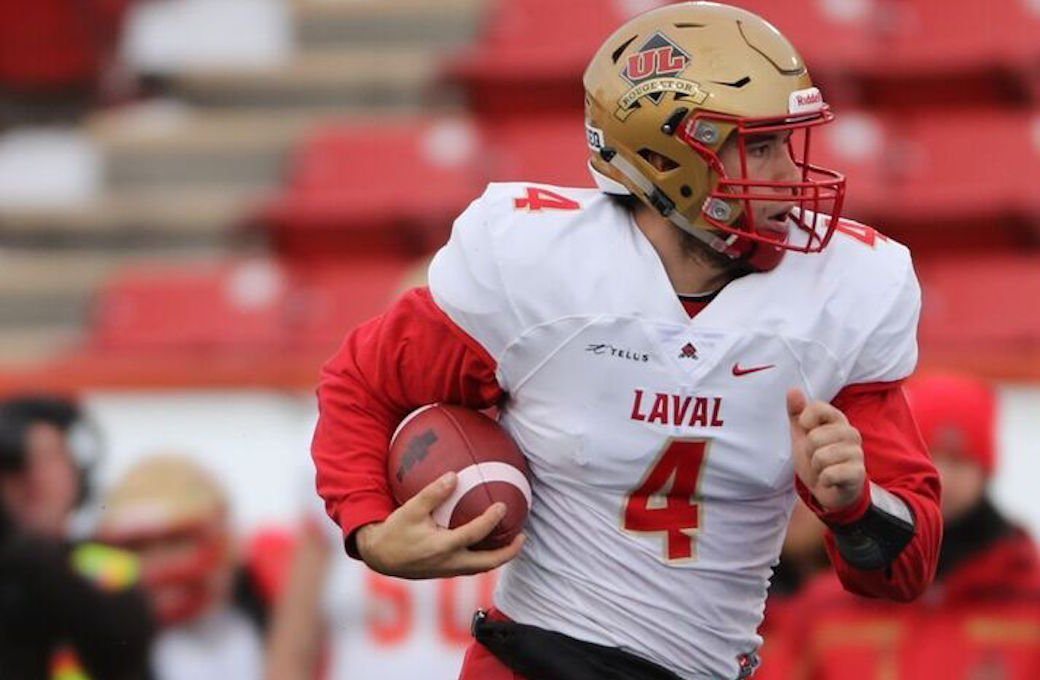 Sparked by a penalty-aided drive in the third quarter, which ended in a two-yard TD pass from Richard to Simon Gingras-Gagnon, Laval made it 20-18 and took their first lead of the game with just under six minutes to go in the quarter.

Down by a pair heading into the final 15 minutes, the Dinos were set to get the ball back on the opening play of the fourth quarter when disaster struck. Rookie Deane Leonard’s miscue on a Rouge et Or punt at Calgary’s 42-yard line led to six quick points for Laval, as Leonard had the ball pop directly into the outstretched arms of Gabriel Ouellet, who ran the fumble into the end zone.

That score stretched Laval’s lead to 27-18 and proved to be the game’s winning score.

We gave them points and against good football teams you can’t do that – you can’t give them special teams touchdowns and you can’t give up penalties that put you into bad situations.

“I don’t want to focus on the reffing, I want to focus on the fact that Laval and Calgary are two great football programs that really battled well today and that’s what this is about. My hat is off to them. They came out here and played the type of game that they needed to win. That special teams touchdown made the big difference and put us behind the ball at the end there, and we weren’t able to come back from that one.”

Despite getting 318 yards of passing from quarterback Adam Sinagra and another 50 on the ground from the third-year pivot, the Dinos offence stalled in the second half, as the Rouge et Or defence ramped up at the right time, holding Calgary to 124 total yards in the final 30 minutes. 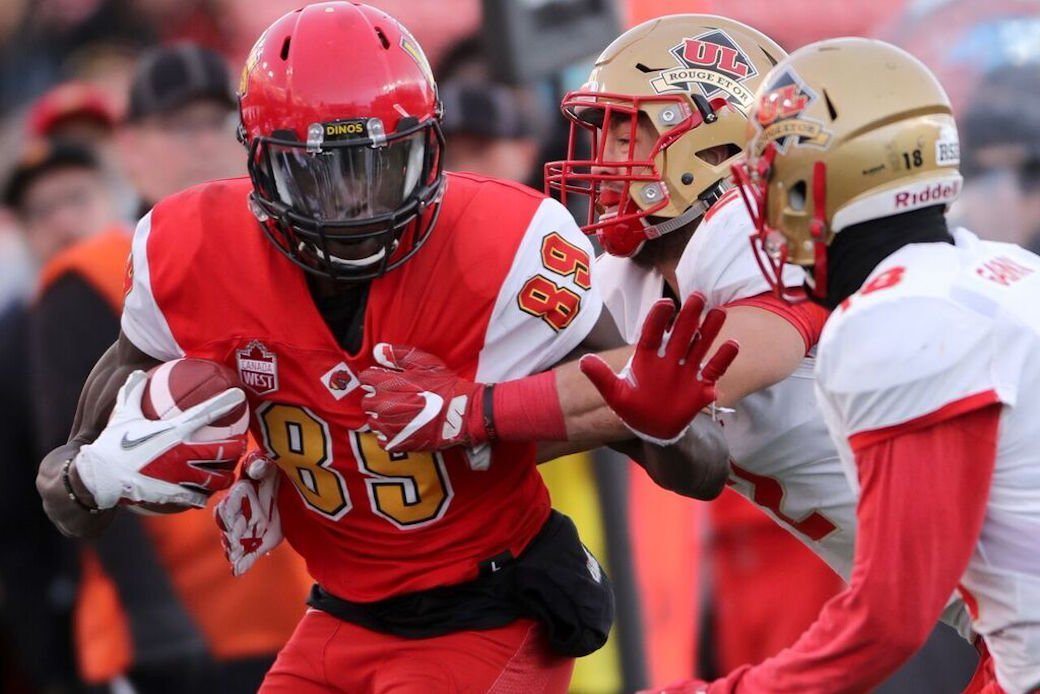 On the other side, Richard ended the day with 258 yards passing on 21 completions, two touchdowns, and no interceptions.

Starting with the ball was a big plus for us. We knew we had to start off strong and build momentum in the second half to come away with the win. I think we did a fairly good job with that and scored some key points, including the turnover on punt coverage for a touchdown. That took a lot of pressure off our offence and helped us bring the game home.

Laval will now meet Western in next weekend’s Vanier Cup, where the Rouge et Or and Mustangs will meet for a national title for just the second time, after Laval earned a 44-21 win in the 2008 edition of the game at Hamilton’s Ivor Wynne Stadium.

“They’re a high powered offence. They’re a bit of an old school (team),” said Richard of next week’s matchup. “They pound the rock a lot, so we’re going to have to study them well. On defence, I really haven’t seen what they can do, but if they’ve made it this far I know they’re a really good team.”

The ArcelorMittal Dofasco Vanier Cup is set for Saturday, Nov. 25 at 1 p.m. ET / 10 a.m. PT at Tim Hortons Field in Hamilton and will be televised live on Sportsnet 360, Sportsnet 1 and TVA Sports, with coverage beginning on all networks at 12:30 p.m. ET with a 30-minute pre-game show. The game is also available online through Sportsnet NOW and TVASports.ca.
For all the information on the 53rd Vanier Cup, visit vaniercup.com. Tickets are available at ticketmaster.ca, starting at $25.