With the 54th Vanier Cup Presented by Promutuel Insurance right around the corner, memories of past national championship triumphs often come flooding back for the thousands of former U SPORTS football players at this time of year.

Enter Julian Hanlon – the only one who can lay claim to one of the greatest feats in U SPORTS history during his illustrious career, some 40 years ago. Outside of being an OUA All-Star centre, Hanlon was a part of two undefeated Vanier Cup-winning teams, with two different universities. 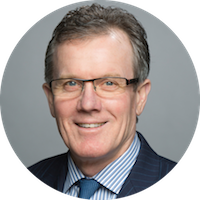 Hanlon played for the Ottawa Gee-Gees from 1974-77 and won the Vanier Cup when the team went undefeated at 11-0 in 1975. After receiving his undergrad degree in physical education, Hanlon decided to transfer to Queen’s University to work towards his Bachelor of Education in 1978. In his first and only season with the Gaels, he helped lead the team to a undefeated 10-0 Vanier Cup-winning season.

Both teams were so focused, so tight-knit; looking back on it now, it was one of the coolest experiences I’ve had in my lifetime.

“Both teams were really special honestly. On both occasions, both teams felt like they should’ve won it the year before, so some of the older guys came back to sort of finish the deal the following season,” Hanlon says. “Both teams were so focused, so tight-knit; looking back on it now, it was one of the coolest experiences I’ve had in my lifetime.”

In his first two seasons with the Gee-Gees, Hanlon was a key backup along the offensive line. In an era where teams could only dress one backup lineman, Hanlon knew versatility was key.

“It was kind of cool actually, because technically I didn’t start the Vanier Cup that year (in 1975) but I ended up playing almost the entire game because guys got hurt,” Hanlon says. “And I played every position along the line during that game too.”

Hanlon prided himself on being versatile but, really came into his own in 1976, when he was named an OUA All-Star at centre for the Gee-Gees.

Having Hanlon as a backup exemplifies the depth that the Gee-Gees roster had in 1975 – the team was so deep that an All-Star-calibre player couldn’t even crack the starting offensive line. The Ottawa squad is also widely considered one of the best in U SPORTS history.

I think his ability to come from a powerhouse program in uOttawa to Queen’s and transition seamlessly says a lot about Julian’s character.

“That ’75 Ottawa team was just littered with talent – we had at least 11 to 12 guys go on and play in the CFL, and four of them got into the CFL Hall of Fame,” says Hanlon. “Yeah, the guys on that team really were something special.”

Following his four years at the University of Ottawa, Hanlon got his CFL shot. In the 1978 CFL Draft, Hanlon was selected in the fourth round, 31st overall by the Winnipeg Blue Bombers. His stint in Winnipeg was short-lived however, later deciding the best thing for his future would be to work towards his Bachelor of Education – a move that led him to Queen’s. 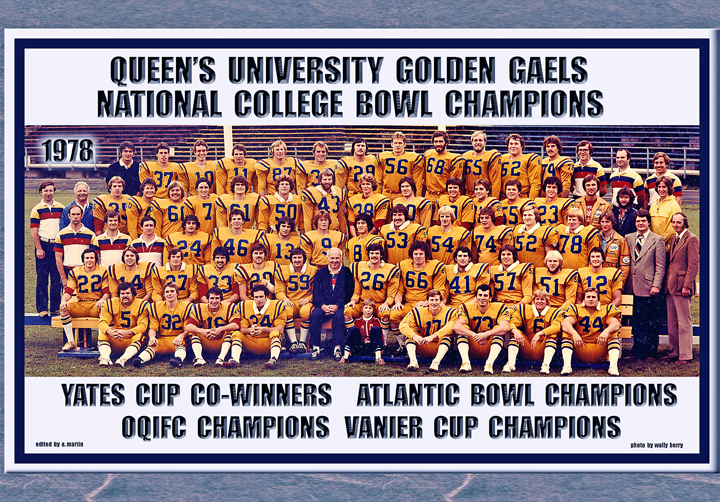 “Queen’s was always known as a great academic institution, and I knew they had a good football team also so the fit just kind of made sense. The coach at the time, Doug Hargreaves, said he would give me a tryout to see what I got, and I ended up starting at tackle for them that entire season,” Hanlon says.

“That ’78 team was something else. Everyone was pulling in the same direction, we really were one cohesive unit. To this day we get together often because not only were we a great and talented football team, but we were brothers and have become true friends for life.”

“Our team in ’77 was good, but I really felt we needed that last little bit to get over the hump,” Best says. “Julian was that help, he brought so much leadership and confidence, with no arrogance at all. He was huge for us the entire year both on and off the field.”

Naturally, being the true offensive lineman that he is, Hanlon would never want to take credit for any of the accomplishments that he’s been a part of.

“I think his ability to come from a powerhouse program in uOttawa to Queen’s and transition seamlessly says a lot about Julian’s character” Best says. “For him to be able to fit in with both crowds says a lot about him. A super talented football player but an even better man.”

With this year being the 40th anniversary of that Gaels’ Vanier Cup triumph, Hanlon has really had the opportunity to reflect on past accomplishments more so now than ever before.

“I feel blessed. I mean, this kind of recognition is odd cause it usually isn’t something that a lot of people know or that I talk about a lot, but it shows the character of the guys on both those teams,” Hanlon says. “A lot of things have to go your way to have an undefeated season, but being able to do it twice was a thrill for sure.”

For a man who spent his career blocking to give other people glory, today Hanlon works every day to ensure that every individual student prospers and can reach their full potential.

In his post-football life, Hanlon has put his background in education to good use - spending 36 years within the Ottawa Catholic School Board. He taught for seven years, then spent time as a vice principal, principal, superintendent, associate director, and director of education. Since 2015, he has served as the executive director of the Canadian Catholic School Trustees’ Association.

For a man who spent his career blocking to give other people glory, today Hanlon works every day to ensure that every individual student prospers and can reach their full potential.