With the Vanier Cup All-Canadian Gala set for Thursday night at the Vidéotron Centre in Quebec City, U SPORTS takes a closer look at each conference’s football major award winners and all-stars vying for national honours and All-Canadian recognition.

Record-setting quarterback Adam Sinagra is the 2018 Canada West Football Player of the Year.

The Calgary Dinos pivot takes home the award after a remarkable 2018 campaign, which saw the Pointe Claire, Que. native break the CW and U SPORTS single-season passing yards record.

Sinagra now moves forward as the Canada West nominee for the Hec Crighton Trophy as the nation's top university football player. Sinagra is looking to become the fifth consecutive CW nominee to claim the honour.

Along with Sinagra's award, the conference handed out six other honours, all of which were selected by Canada West's six head coaches.

Joining Sinagra as winners from Calgary were: receiver Tyson Philpot (Rookie of the Year), defensive lineman Joel Van Pelt (Outstanding Lineman), and head coach Wayne Harris (Coach of the Year). Combined, the four Dinos award winners helped lead the team to a perfect 8-0 regular season, as Calgary finished first in the conference for the sixth time in the last seven years.

Hladik, a second-year linebacker, claimed the title as CW's top defender thanks to a conference-best 10.5 tackles for loss, while finishing second in total tackles with 49.5

Meanwhile, McKoy was named the conference's top student-athlete – and nominee for the prestigious Russ Jackson Award – thanks to his extensive volunteer activities, excellence on the field, and Academic All-Canadian credentials in the classroom.

Rounding out the CW award winners was Sheldon Neald. The Regina Rams offensive line coach is the CW nominee for the Gino Fracas Award, which honours the nation's top volunteer coach.

All national honours will be handed out as part of Vanier Cup week on Thursday, Nov. 22 at the Videotron Centre in Quebec City.

You can watch Sinagra and company in action this Saturday at 1 p.m. MST, as the Dinos host the Saskatchewan Huskies in the 82nd Hardy Cup. For more details on the big game, click here. 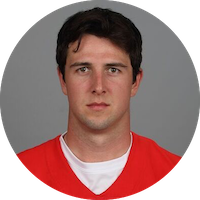 After learning from CFL greats Dave Dickenson and Bo Levi Mitchell during his time in Calgary Stampeders camp this spring, Adam Sinagra proceeded to have one of the best season's in Canada West football history.

His 3,233 passing yards set a new conference and U SPORTS record, as he led the Dinos to a perfect 8-0 season, and the most potent offence in the nation, averaging 570.9 yards per game.

Sinagra topped Canada West in passing touchdowns this season with 23, and led the conference with a passer rating of 126.

After learning from the likes of former Hec Crighton winning quarterbacks Erik Glavic (2007) and Andrew Buckley (2014 and 2015) – who are now coaching with the Dinos, –Sinagra is looking to join his mentors as a Hec Crighton winner. Should he claim the award, it will mark the fifth consecutive season a CW player has taken home Canadian university's biggest individual prize.

“Adam’s confidence level and his leadership have really emerged this season. It’s something we didn’t see a lot of in his first two years where he was more of a quiet leader. Now, he says the right things at the right time and shares the information with his receivers and line. He learned what it’s like to prepare as a professional – the way he watches film, makes notes in meetings on our systems and our opponents has significantly changed. Canada West has its share of fast guys, but it’s nothing like the speed of the CFL and that experience really slowed things down for him and has helped with those reads and adjustments. Everything he has learned has helped him be a better quarterback.” - Calgary Dinos head coach Wayne Harris. 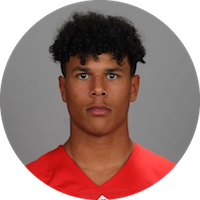 A major aerial weapon this season in the Stampede City, Calgary Dinos receiver Tyson Philpot is the Canada West Rookie of the Year.

Philpot finished fourth in conference receiving yards with 741, and was a major deep threat for the Dinos. The Delta, B.C product had an average target depth of 17.6 yards in 2018, and hauled in eight receptions of 30 yards or more.

Philpot posted plenty of explosive plays this season, including Week 2 when he burst on to the scene with a 107-yard touchdown reception against UBC – the longest catch in Dinos history.

Highly-touted as a recruit after being the 2017 BC high school player of the year, Philpot was the lone rookie named to the conference's all-star team last week.

“Tyson has been a great addition to our program. He has a great attitude and work ethic, and his skill set far exceeds the average freshman. He has been able to learn our systems quickly, and has dedicated himself to being successful. He has made big catches, in big games, at big moments. He continues to work hard in practice and doesn’t take anything for granted. He has been a great addition and a great teammate for everyone in the room.” - Calgary Dinos head coach Wayne Harris. 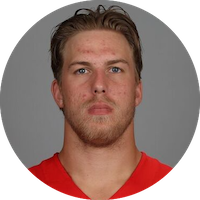 The Lethbridge, Alta. product racked up nine tackles for loss in 2018, with six of those being sacks. Van Pelt played a key role for the Dinos defence, which finished first in the conference in terms of yards allowed, averaging 388 per game.

The fifth-year Science student emerged from a crowded group of candidates to be the conference nominee for the J.P Metras Award, which honours the nation’s top lineman.

He’s looking to become the first Dino to win the Metras since Garret Everson claimed it back in 1988.

“It has been a great year for Joel in every capacity. You’re never quite sure how a player will adjust coming back from a pro camp, but Joel came back and embraced a leadership role. His physical presence and development have come into their own after five years in the weight room, and we’ve seen how it has impacted his play. His understanding of the game and the level of maturity he has developed have positively influenced his success." - Calgary Dinos head coach Wayne Harris.

COACH OF THE YEAR: WAYNE HARRIS 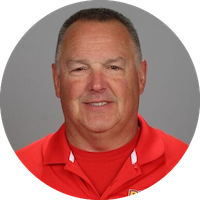 Rounding out Calgary’s award winners is head coach Wayne Harris, who is the conference’s Coach of the Year for the second consecutive season.

The fourth-year head coach has been nearly unbeatable at the helm of Calgary, leading the Dinos to a 29-3 regular season record and a 7-3 playoff mark since taking over the program in 2015.

This marks the third conference award for Harris, who was also named CW coach of the year back in 2015, when he went on to win the Frank Tindall Award as U SPORTS' top coach.

“Wayne and the talented group of assistant coaches he has assembled around him continue to set the standard for coaching staffs in university football in Canada, and Wayne would be the first to say this is a team award. Year in and year out they recruit outstanding student-athletes to the University of Calgary, and the development opportunities they provide are second to none. We are proud to have Coach Harris leading our football program.” - Calgary Dinos athletic director Jason Kerswill. 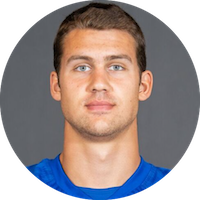 Second-year linebacker Ben Hladik was around the ball all season long for the UBC Thunderbirds, and has been named the conference's Outstanding Defensive Player as a result.

The Vernon, B.C. product finished the 2018 season second in Canada West with 49.5 total tackles and led the conference in fumble recoveries (3), and tackles for loss (10.5) . Hladik also had three quarterback sacks and a forced fumble while leading the ‘Birds with 39 solo tackles.

“Ben had an incredible sophomore season for us, he’s the kind of player that we rely on to make big plays throughout the game and to be a guy that’s in the middle of the defence in almost every key situation. He is a very special football player both physically and intellectually. His acknowledgement by the other coaches is well deserved and I really feel he has an opportunity to become one of the top players in U SPORTS football.” - UBC Thunderbirds head coach Blake Nill. 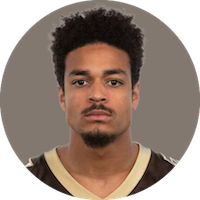 Throughout the last five years, Jayden McKoy has been recognized by his teammates and coaches as a leader within the Bisons football program, both on and off the field.

In terms of community involvement, McKoy has spent no shortage of time volunteering for numerous initiatives around the province, including: Israel Idonije's Inner City Youth Football Camps, and the Winnipeg Blue Bombers “Crunchers” Football Camps.

He’s volunteered every season in Thompson, Manitoba — 800 kilometres north of Winnipeg — at football camps, which are part of suicide prevention programming in the community.

On campus, Jayden has been involved in several University of Manitoba Athletic Council (UMAC) initiatives. This includes the Bisons Against Bullying Program, which has seen Bison athletes visit over 200 schools to speak with youth, sharing an anti-bullying message.

Other UMAC initiatives that Jayden has been part of include: Bison Book Buddies (reading to local school children) and annual visits to Siloam Mission, where McKoy volunteers and serves meals to Winnipeg’s inner city homeless.

Finally, McKoy has continued forward Sam’s Christmas, an initiative started by former Bison football player Thomas Hall. This Christmas, McKoy and others will collect donations of food and other items, which are then distributed to Winnipeg families in need.

In the classroom, McKoy is a three-time U SPORTS Academic All-Canadian in the highly demanding Faculty of Computer Engineering. He is currently taking 32 credit hours in the 2018-19 academic year.

On the field, he has amassed over 180 tackles and started every game for the Bisons in his five seasons. His 14 career interceptions are second all-time in the Manitoba record book.

“Jayden’s nomination for the prestigious Russ Jackson Award is well-deserved. We’re extremely proud that he’s the representative for Canada West moving forward. His career at Manitoba has been outstanding in all respects. He’s been the leader of our program and is certainly the most respected player in our locker room by both teammates and coaches alike. We wish him well as he represents both the University of Manitoba and Canada West at the All-Canadian Awards in Quebec City.” - Manitoba Bisons head coach Brian Dobie. 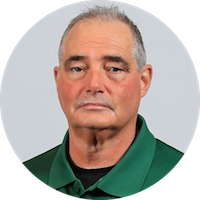 Sheldon Neald has been an offensive line coach with the University of Regina Rams since the 2010 season. Five of his Rams have gone on to be selected in the CFL Draft, including Brett Jones who was named the CFL Most Outstanding Offensive Lineman in 2014 and is currently with the NFL's Minnesota Vikings. Prior to joining the Rams, Neald spent a decade with the Regina Thunder program as an offensive line coach and also has experience at the high school level, at the provincial level, and as a guest coach at the professional level.

"Sheldon is widely and affectionately known in the coaching community as Surl, but underneath a sometimes-gruff exterior lies a man with a heart of gold who cares deeply about his players, their well-being, and their development. He's played a critical role in sending many offensive linemen to the NFL and the CFL over his decade-plus with the Rams." - Regina Rams head coach Steve Bryce.