The stage is set for the 55th Vanier Cup, presented by Promutuel Insurance, Saturday in Quebec City, where the Calgary Dinos and Montreal Carabins will battle for Canadian university football supremacy.

Kickoff for the U SPORTS national final is set for 1 p.m. Eastern (10 a.m. Pacific) at TELUS-Université Laval Stadium, which first welcomed the fall classic in 2009 and is now a six-time host venue.

The championship match is televised live on CBC and TVA Sports. Livestreaming of the Vanier Cup will also be available on the free CBC Gem streaming service, CBCSports.ca and the CBC Sports app for iOS and Android devices - offering coverage both domestically and internationally. Fans can access the French webcast with a valid subscription via TVASports.ca.

While it will mark the first-ever confrontation between the powerhouse programs, both will be in familiar territory when they step onto the field later this week.

The Carabins, of course, are regular visitors to the provincial capital, where they downed the hometown Rouge et Or earlier this month to capture the RSEQ Dunsmore Cup conference title. TELUS-UL Stadium was also the site of Les Bleus’ most recent Vanier Cup appearance, in 2015, a heartbreaking loss to UBC that came 12 months after they claimed their lone national title in Montreal. 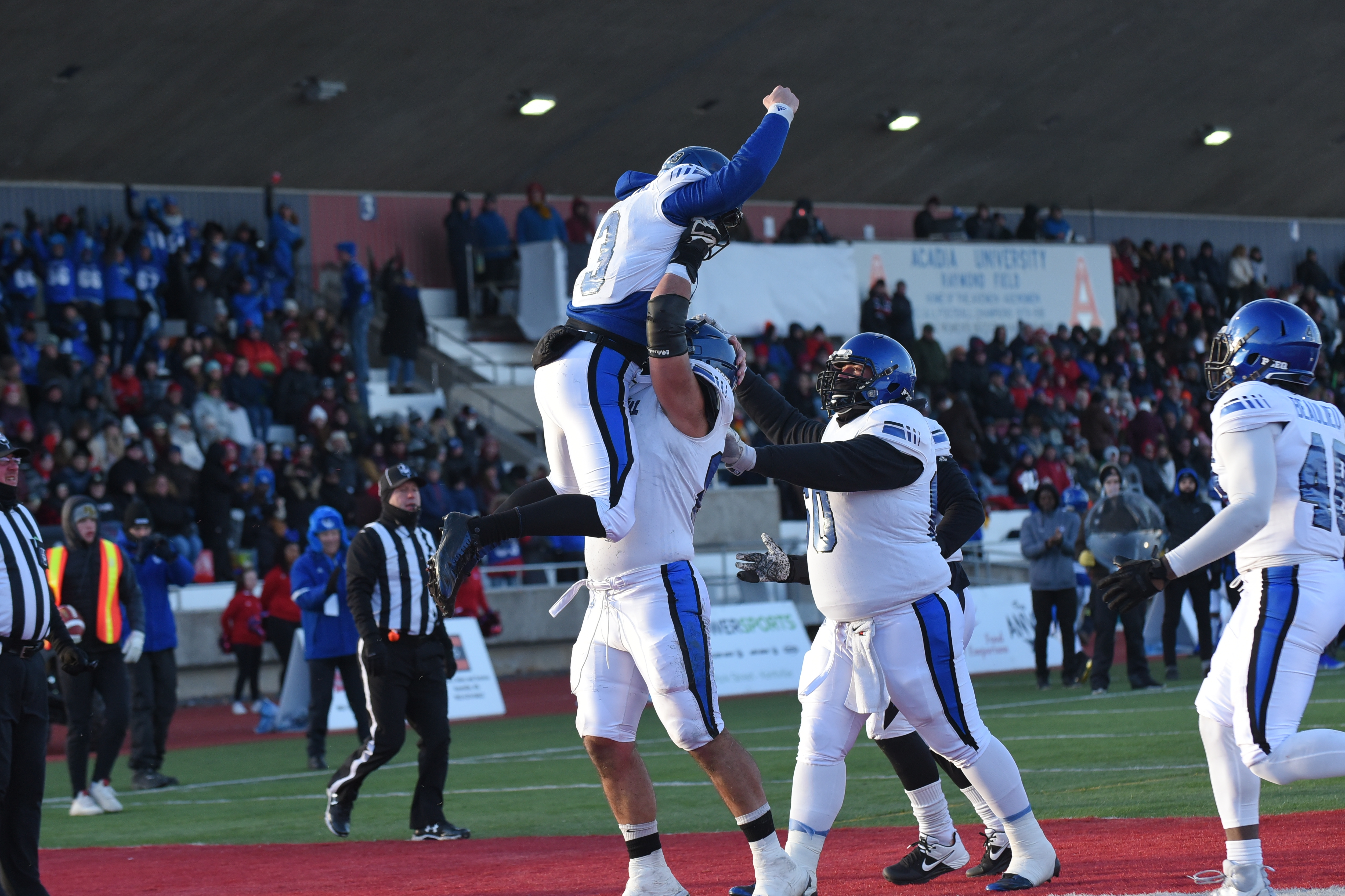 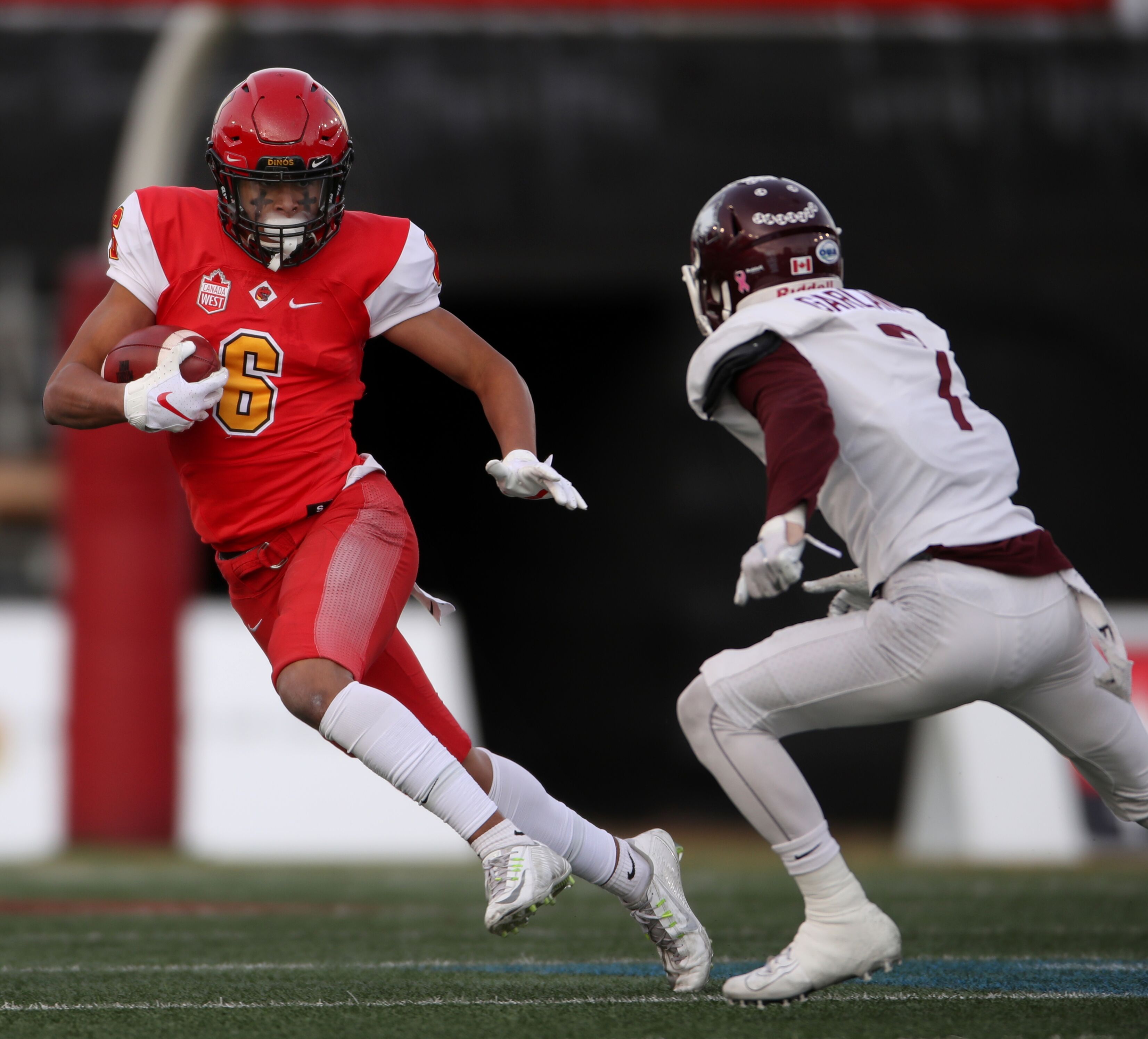 Both contenders enter the duel with identical 9-2 records, and their confidence at a season-high following convincing wins in last Saturday’s Uteck and Mitchell Bowls.

At Wolfville, N.S., Montreal’s stingy defensive unit resumed its domination in a 38-0 shutout victory over Acadia, holding the nation’s top-scoring team (38.6 points per game in the regular season) to 10 first downs and 185 yards of total offence. After finishing second in the country in league play with an average of 11.6 points allowed per contest, the Carabins have managed to step it up a notch in the playoffs, conceding 16 in three outings. 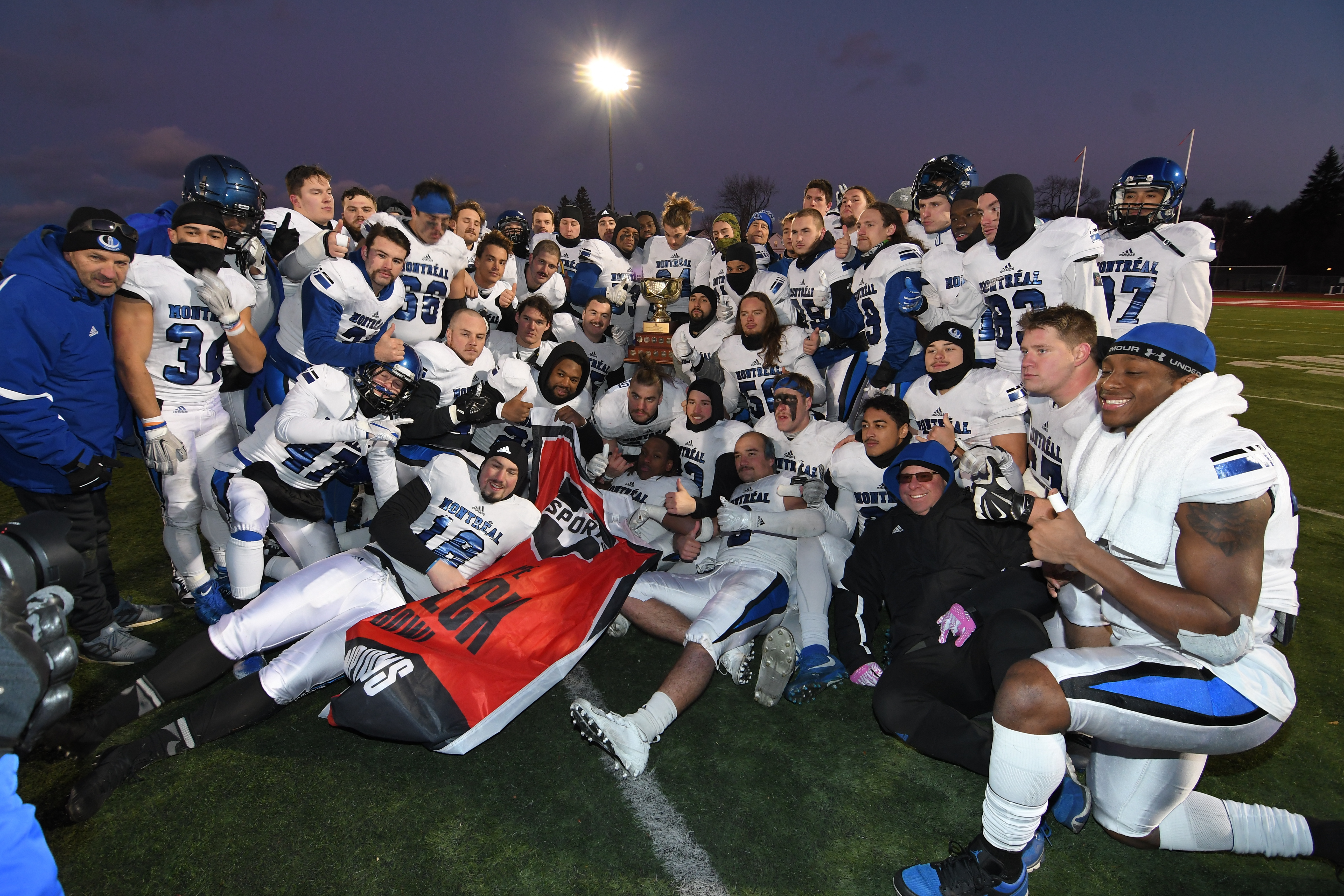 At Calgary, the Dinos were in control from start to finish in a 30-17 triumph against McMaster, a touchdown with 45 seconds remaining in the fourth quarter making the final score more flattering for the visitors. Led by quarterback Adam Sinagra of Pointe-Claire, Que. - the 2018 Hec Crighton trophy winner and a finalist for the Lieutenant Governor Athletic Award as U SPORTS Male Athlete of the Year - the high-flying U of C squad has averaged over 35 points scored per game so far in the post-season. 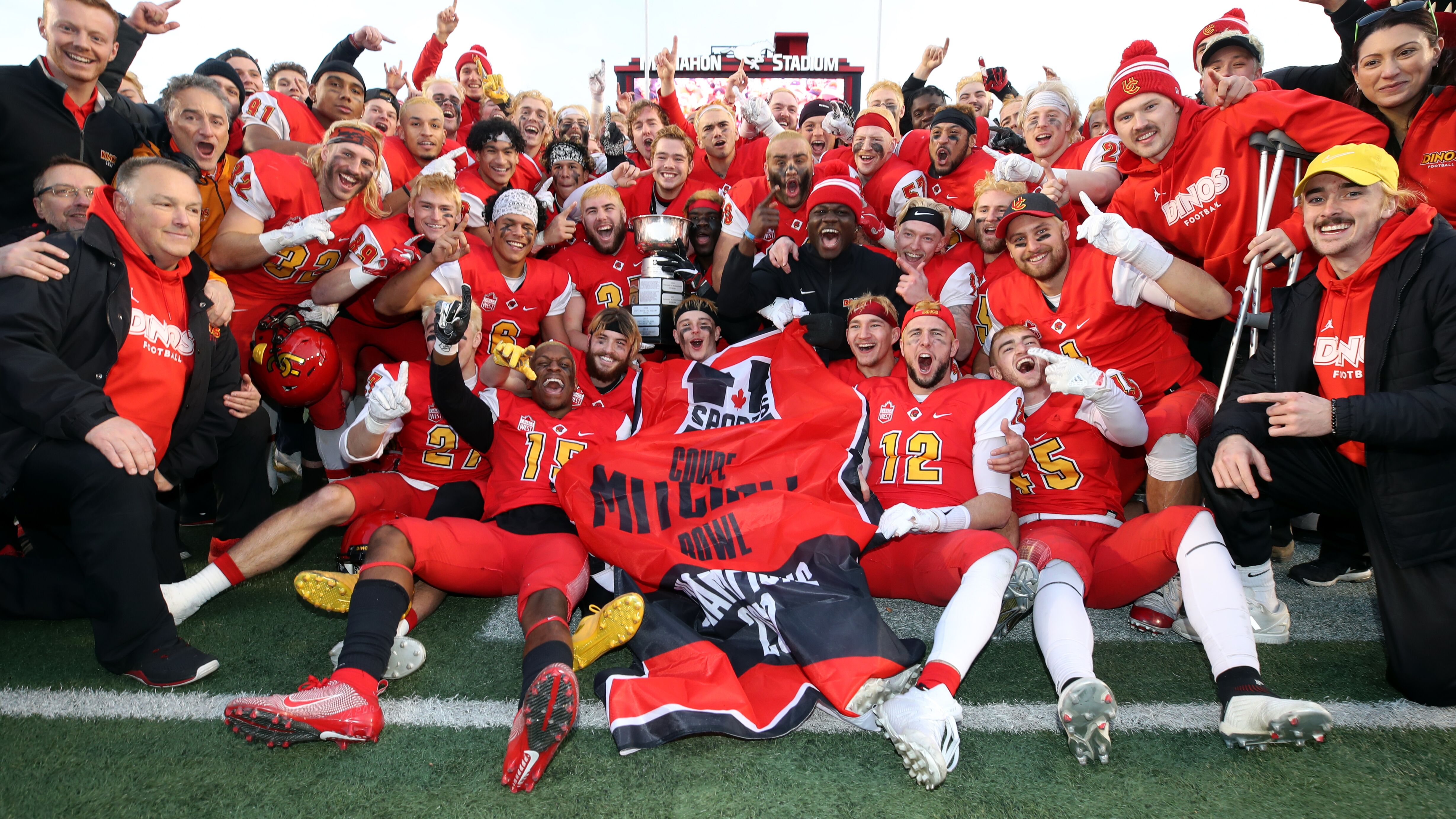 One thing is for sure: both coaching staffs will have their troops ready come game time.

At the helm of the Carabins since 2011, Danny Maciocia is the only head coach in history to lead teams to Grey Cup (Edmonton, 2005) and Vanier Cup (2014) titles. 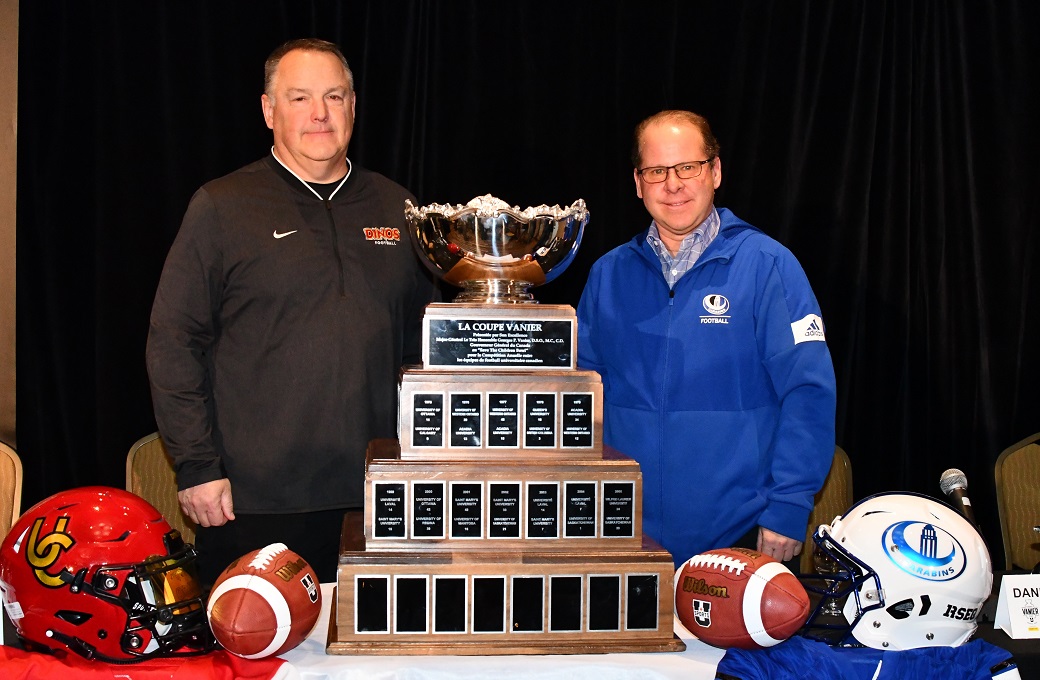 For the Dinos, Wayne Harris Jr., who took over as bench boss in 2015, has been with the program for four decades as a player and coach, helping Calgary capture its fourth and most recent Vanier Cup crown in 1995, when he was in charge of the linebackers group.

“We’re facing the Dinos for the first time in history. We know it will be quite a challenge, they have tremendous size on both sides of the ball, and a star quarterback who has proven he’s among the best in the nation,” said Maciocia, who led his program to its first two Vanier Cup appearances in 2014 and 2015, a thrilling 20-19 win over McMaster followed by a 26-23 loss to UBC. “It will be a very tight game, and our execution will have to be perfect if you want to win this coveted trophy.”

Harris has been part of five previous Vanier Cups, including in 2016, when he guided the Dinos to the national final in his second campaign at the helm (31-26 loss to Laval in Hamilton). 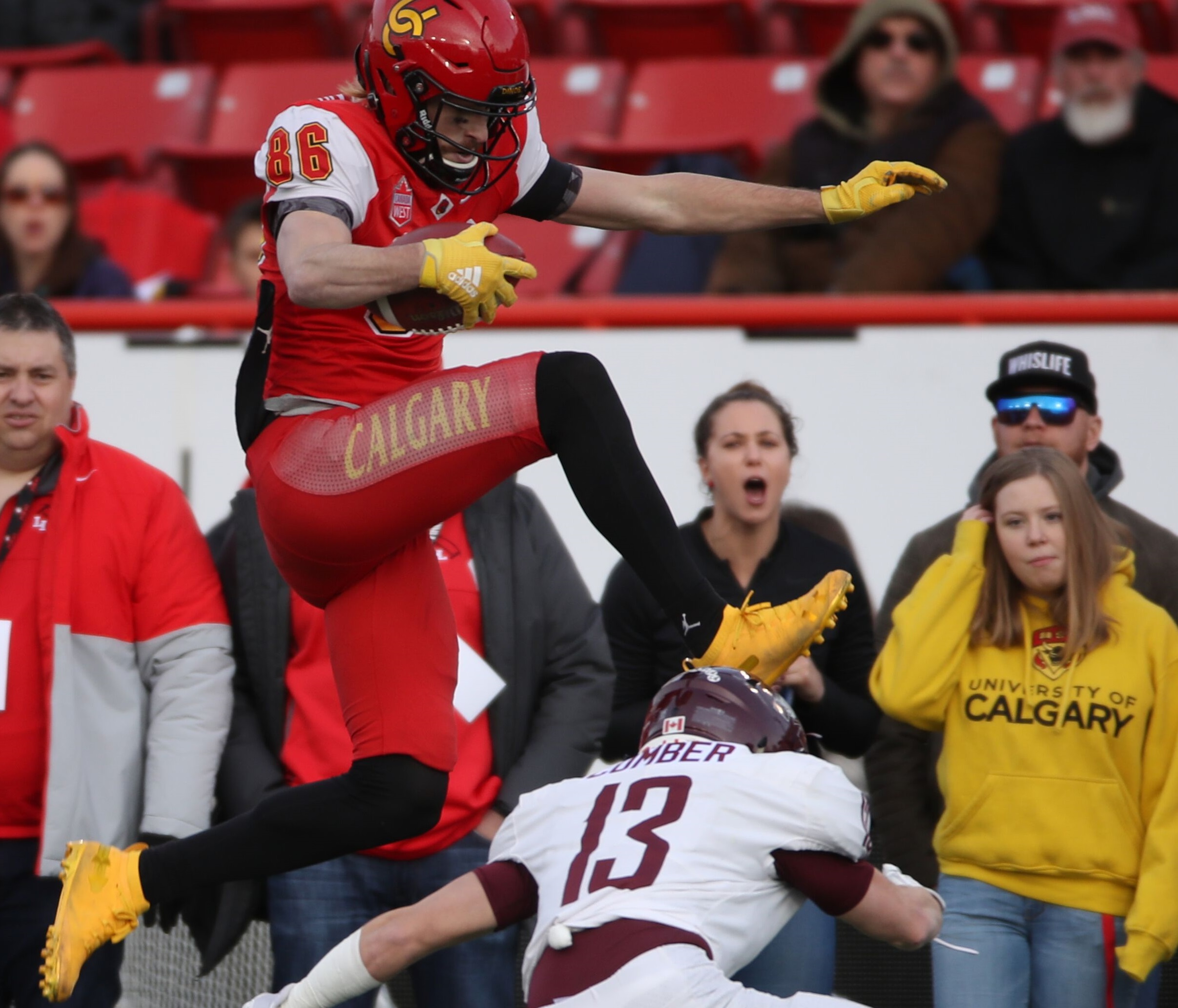 “First time ever against Montreal. They’re a very good team. Any team that makes it to this stage is a very good football team. They have a lot of team speed, they’ve played some great defence through the year. They also have a lot of weapons on offence, a good running game, they’re a very balanced attack. They’ve got some good special teams players as well.

“We’re gonna have to match all of that intensity. Them playing in their home province as well. We have a lot of hard work ahead of us on Saturday.”

For the Carabins to come out on top Saturday afternoon, chances are their suffocating defence will once again have to be at its best.

Stellar defensive play has been a staple of Maciocia’s teams ever since he took over the program. His troops have finished among the top three in the country in fewest points allowed each of the past eight seasons, including an RSEQ-record 46 points in eight conference games a year ago.

In the Uteck Bowl, Acadia quarterback Hunter Guenard, the AUS player of the year coming off a 2,287-yard season, was held to 61 yards on 7-of-18 passing.

“We’ve had some good moments since the start of the playoffs, but there’s still so much work to be done,” said Harelimana, a three-time all-star who racked up a team-high six solo tackles against Acadia. “The Dinos are one of the best teams in the country and we have a lot of respect for them, but we also know we’re capable of playing very good football. We’ll have to contain their explosive offence if we want to have a chance to win.”

On the other side of the ball, saying the Carabins’ offence is peaking at the right time would be a major understatement.

After averaging a modest 18 points per contest during the regular season, which ranked 21st out of 27 in U SPORTS, Montreal has scored 34 per game in the playoffs, including its best outputs of the campaign in the RSEQ semifinal versus McGill (39) and last weekend against the Axemen (38). 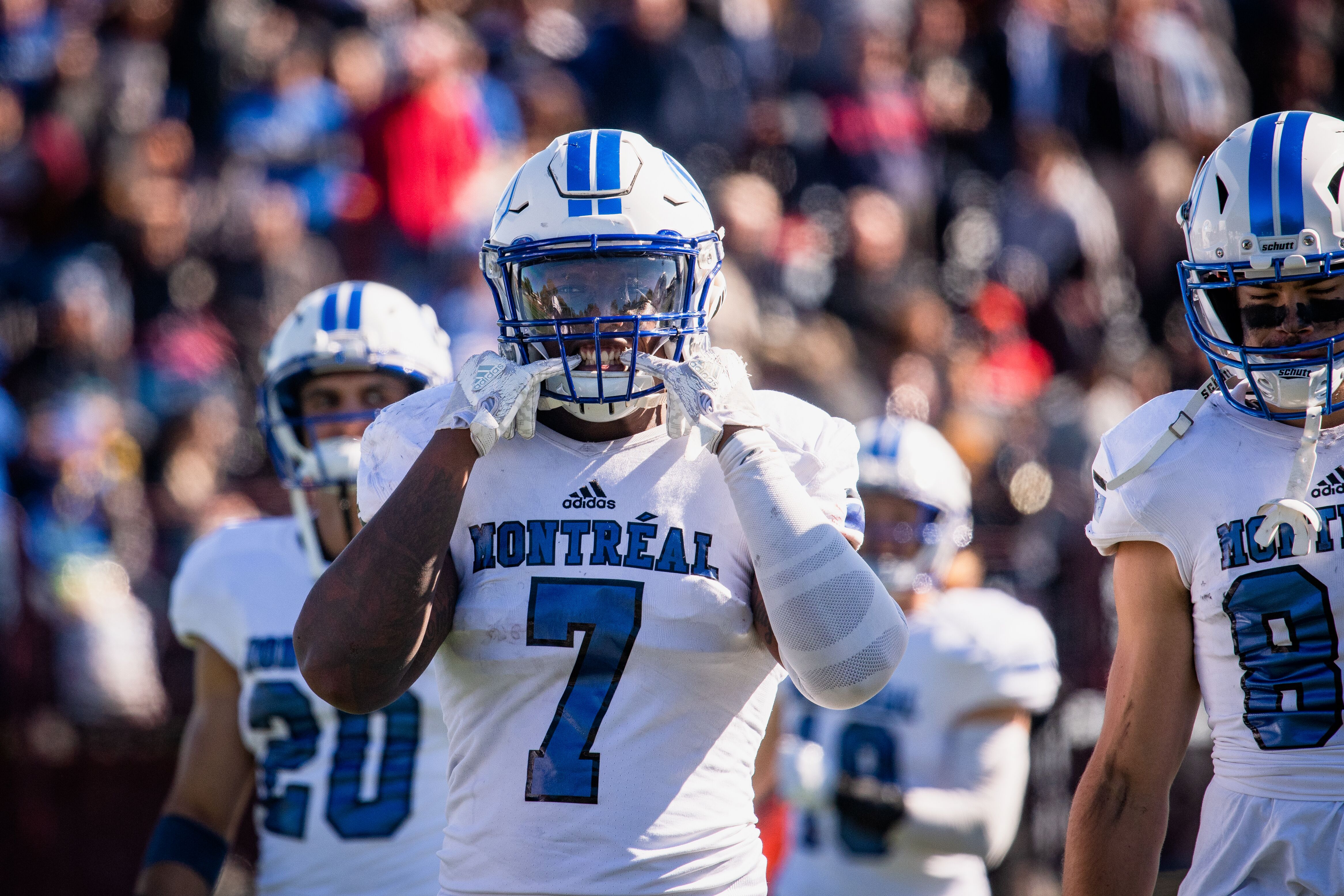 Ryth-Jean Giraud was the RSEQ’s top rusher in league play with 575 yards but it was Reda Malki who stole the show in the Uteck Bowl with 160 and two touchdowns on only 15 carries. For his part, receiver Kevin Kaya, who missed the 2018 season with injuries, made an impressive comeback this fall and led the team with 45 catches and 597 yards in eight conference games.

“It's very exciting to take part in my first Vanier Cup,” said Kaya, a first-time RSEQ all-star. “It will be a great game, and we’re facing a fantastic team. I don’t know them very well, but I know our coaches will do a great job getting us ready. We’ll have to fight for every inch.”

Like Montreal’s defence, Calgary’s attack has been so dominant in recent years that it has often overshadowed the work of a very potent defensive group.

However, while the Dinos still present a formidable threat every time they have the ball, they did see most of their offensive numbers go down this season, especially points scored, dropping from 44 per contest a year ago to 30.8.

Sinagra, for one, threw for 2,014 yards in seven conference games, after setting a U SPORTS record in 2018 with 3,233 yards in eight matches. According to the graduating senior, this drop was mostly the product of the team’s more balanced approach on offence. 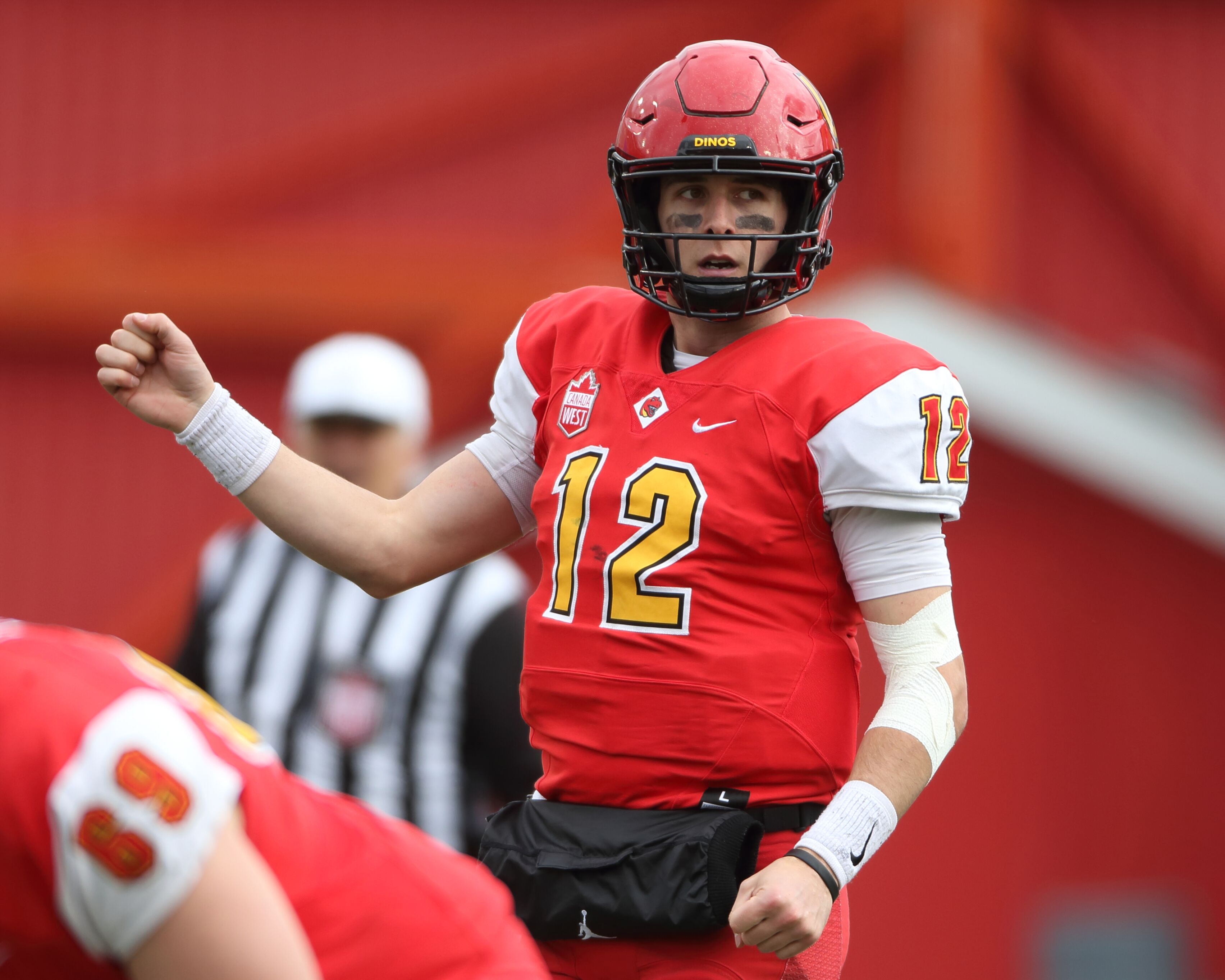 In the Mitchell Bowl, Calgary amassed 263 yards through the air and 237 on the ground.

“It wasn’t all pretty at first. A lot of trial and error. It’s the kind of thing you build for the long haul. It’s not always pretty football but it’s effective,” said the standout pivot, who was a solid 19-of-29 for 261 yards against McMaster. “I think we’ve done a good job of pushing the ball downfield while at the same time being methodical and running the football well. Our offence is complete. We have all the packages that defences have to plan for, and I think that’s what makes us such a tough opponent because there’s so much that we can throw at you every game.

“On Saturday, we’re gonna have to win the line of scrimmage. It always starts there. We have to stay out of second-and-long situations, be able to run the ball effectively, convert on big second downs and punch it in once we get close to the end zone. That’s the recipe to win any football game.”

Sinagra’s favourite target in the national semifinal was once again sophomore Jalen Philpot, who hauled in seven balls for 130 yards and one major after finishing second in the country during the regular schedule with 52 receptions. Running back Robinson Rodrigues contributed 125 rushing yards on 22 carries.

On defence, the Dinos held the OUA champions to 10 points in the first 59 minutes of the Mitchell Bowl, after limiting Saskatchewan to a field goal and a single in the Canada West final. In the regular season, Calgary led the conference in fewest total, passing and rushing yards allowed.

“You have to respect every team. You can’t underestimate anybody, especially in the playoffs,” said defensive back Nick Statz, who had three tackles against McMaster. “Obviously, Montreal is a great team, they wouldn’t be here if they weren’t strong in every facet, offence, defence and special teams. 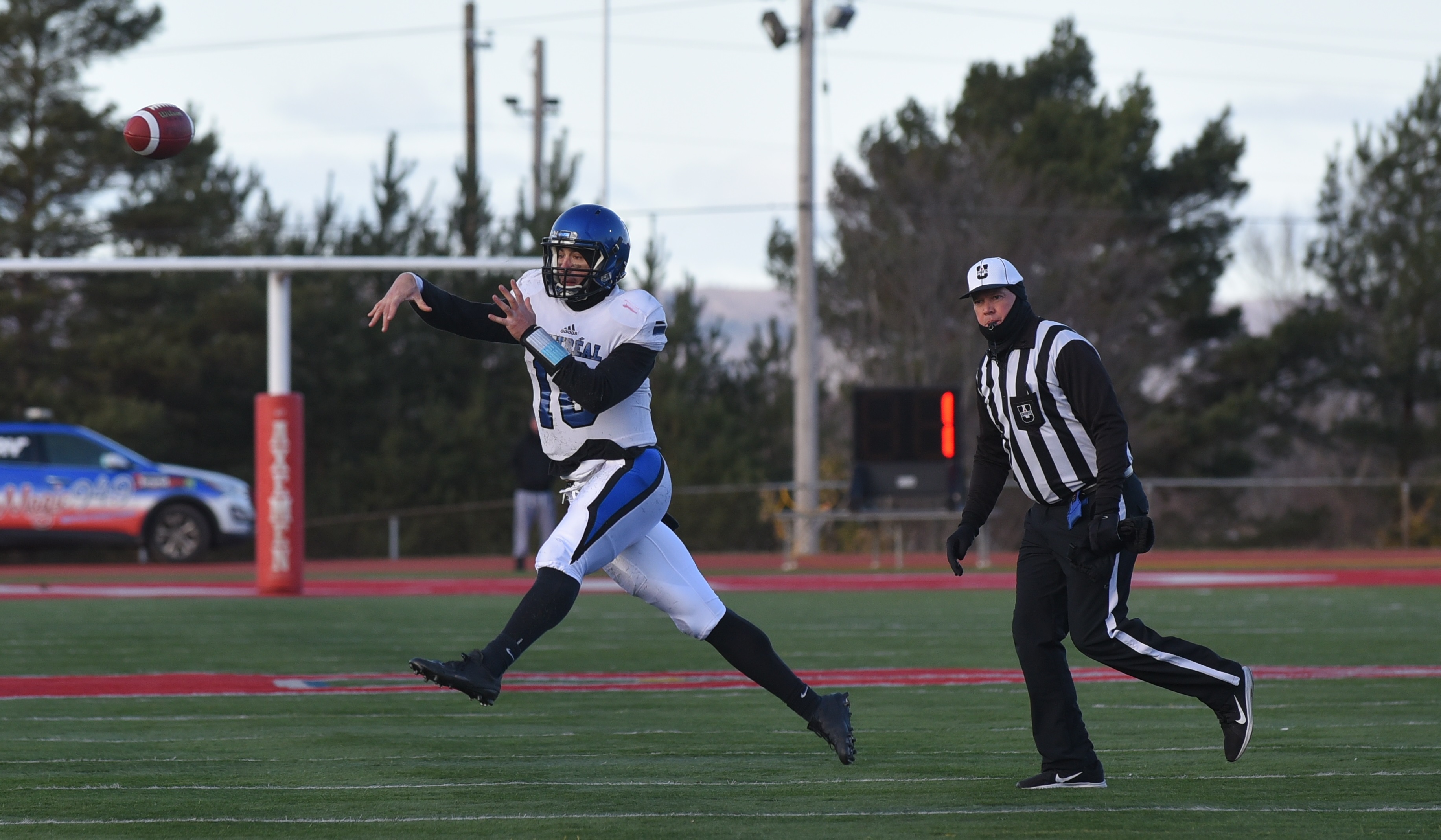 “We just need to continue to do what we do every week and that’s getting prepared. It’s the playoffs. It’s do or die, you don’t try to save anything for next week. If you can look at yourself and say you gave it everything you had, you can look at your teammates and be proud of yourself.”

Dinos or Carabins? The answer on Saturday. 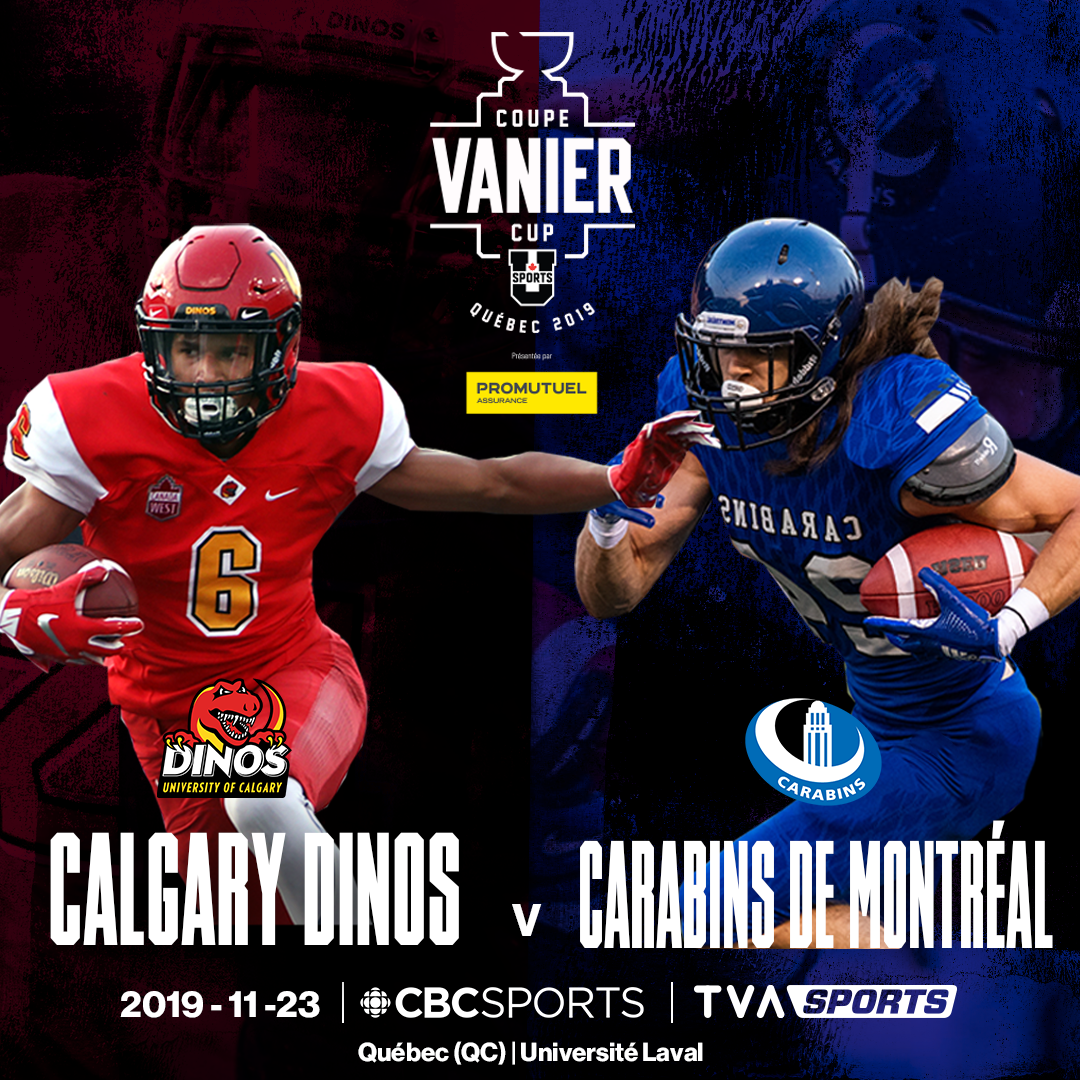 55th VANIER CUP: A LOOK AT THE CONTENDERS