The UBC Thunderbirds are relishing the role as tournament underdogs.

One night after knocking off the No.1 seed Trinity Western Spartans, No. 8 UBC has a chance to win their second national championship in three years after a four-set (25-20, 22-25, 25-16, 25-21) victory over the Dalhousie Tigers Saturday evening at the Saville Community Sports Centre.

Sophomore outside hitter Kiera Van Ryk led UBC with 15 kills and 17 digs, while Tessa Davis chipped in with 12 kills and four aces.

“To be honest, you don’t want to make a big deal about it, but we knew we would have a tough road, but you want to play with that extra fire,” said Thunderbirds head coach Doug Reimer.
“It’s not like we’re defending champions and the No.1 seed like in the past, but this is a fun way of going about it, and we wanted to get after it.” 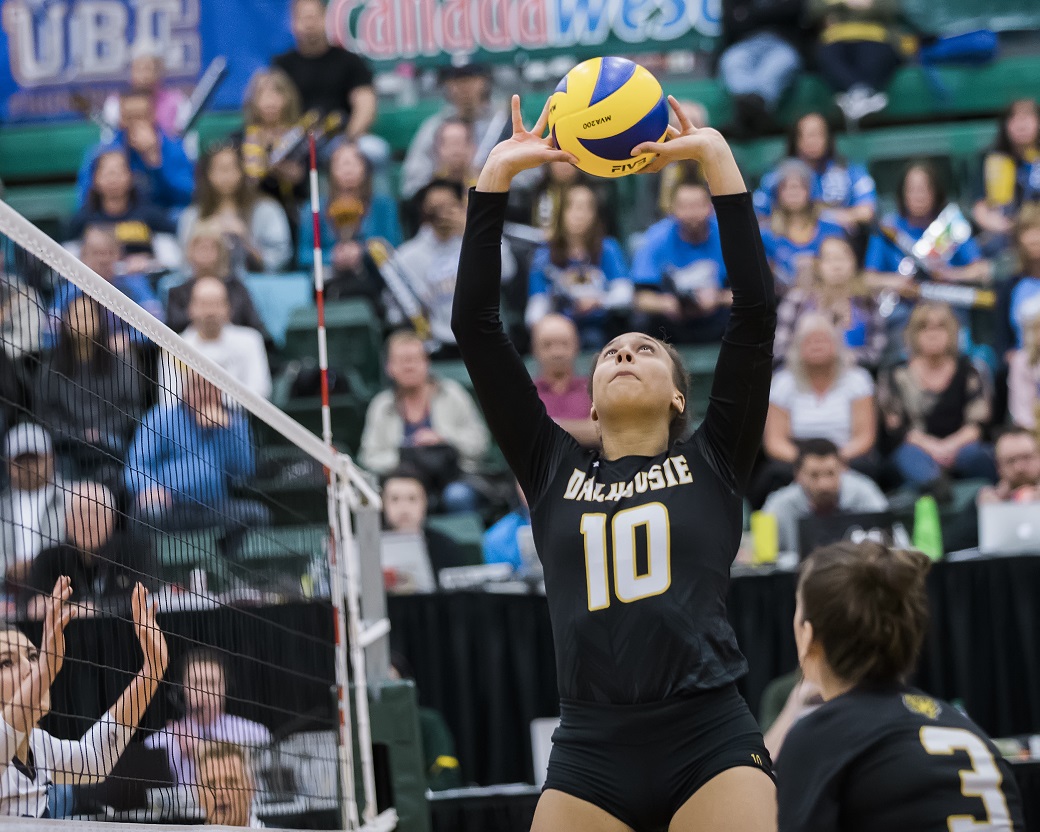 After an emotional win over their rival Trinity Western, UBC kept their momentum in high gear and was in full control in the opening 25-20 set win.

Offensively, UBC spread their attack around the court, making it tough on the Tigers, but the reigning AUS conference champions regained their composure and took care of business taking the second set, 25-22.

“To me, there was a couple of key points. Early in that third we weren’t in good rhythm, but we got it back and that was critical because we were able to get some good runs going,” said Reimer.

“Today at times we let them back in with too many unforced errors. Yesterday we played at a higher level, but at the end of the day, you have to do whatever it takes. 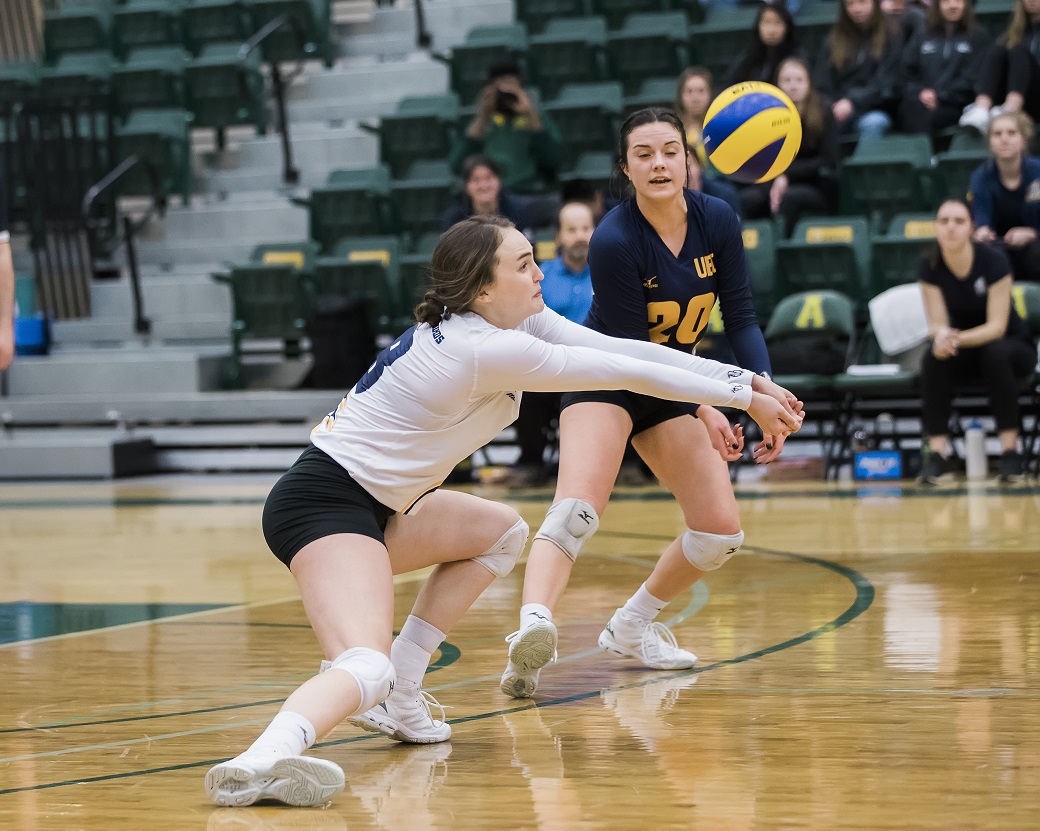 “It was an incredible push back from Dalhousie. They could’ve easily went away, but they pushed us with everything we had.”

UBC and Dalhousie went back and forth battling to wrestle any kind of momentum. On the strength of a couple of aces from setter Courtney Baker, Dalhousie was able to take over a 7-5 lead, but it didn’t take long for the Thunderbirds to answer back with a flurry of their own.

“It was a battle. The second set was a big win, but we had some serving breakdowns in the third set, and it got away from us,” said Tigers head coach Rick Scott. “They’re tough. They’re a good team, but we kept battling, but they always had that response when we pushed back. They had a way to get that key kill.”

UBC went on a huge run and took a commanding 20-13 lead, but Dalhousie showed a lot of fight to close the gap. The Thunderbirds, though, stopped Dalhousie’s bug run with one of Davis’ 12 kills.

“We didn’t quit. In the fourth, if we make another play or two, we could’ve pushed it to five. The girls didn’t give up and they fought really hard,” said Scott. 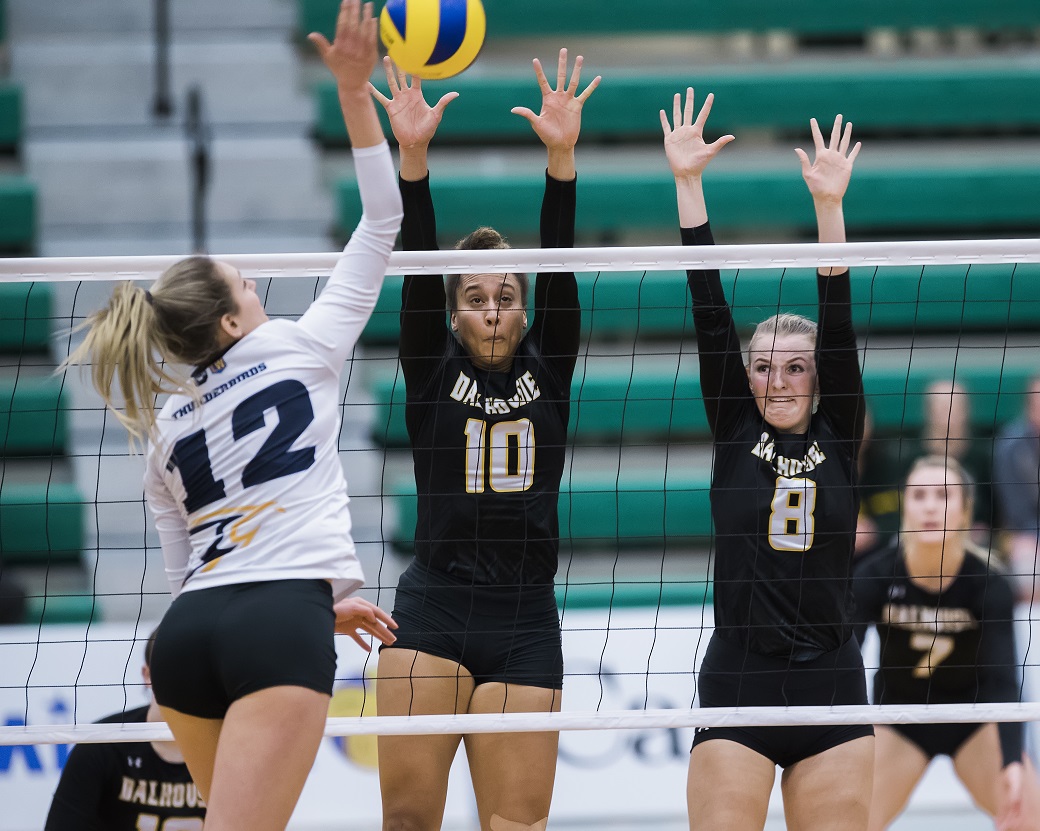 “I can’t say too much other than I’m proud of them. That’s sports though, I’m proud of the way they battled. They kept pushing and that shows a lot of character,” said Scott. “We have to let it go because we’re playing for a bronze tomorrow and we really want to take a medal home.”