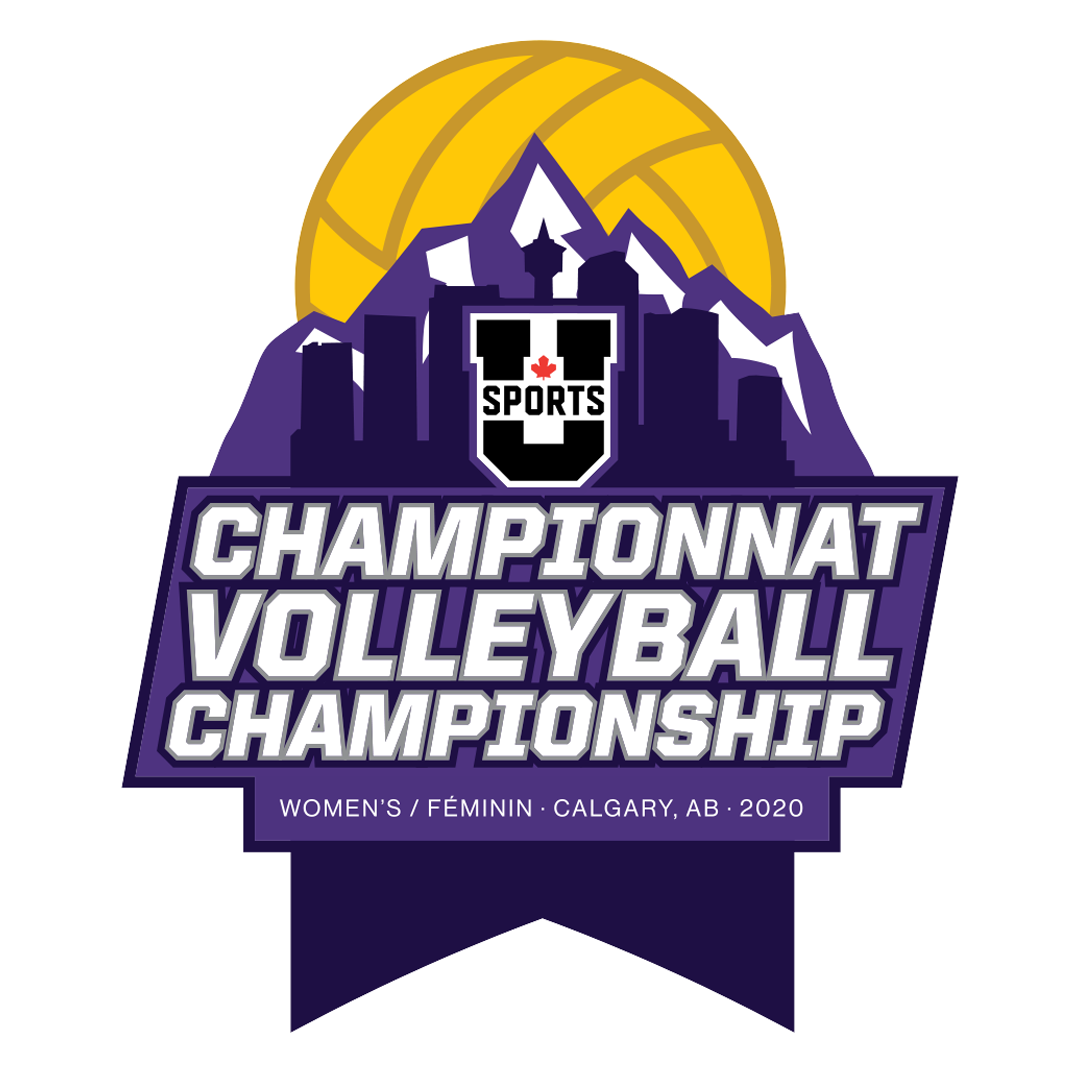 The Trinity Western Spartans were named tournament favourites on Sunday, as the seeding and quarterfinal matchups were announced for the 2020 U SPORTS Women’s Volleyball Championship.

Hosted for the fifth time by the Calgary Dinos, first serve on the tournament flies on Friday and the event concludes Sunday with the gold medal game at 8 p.m. ET / 5 p.m. PT. All games be played at the Jack Simpson Gymnasium

Livestreaming is available via subscription on USPORTS.LIVE. 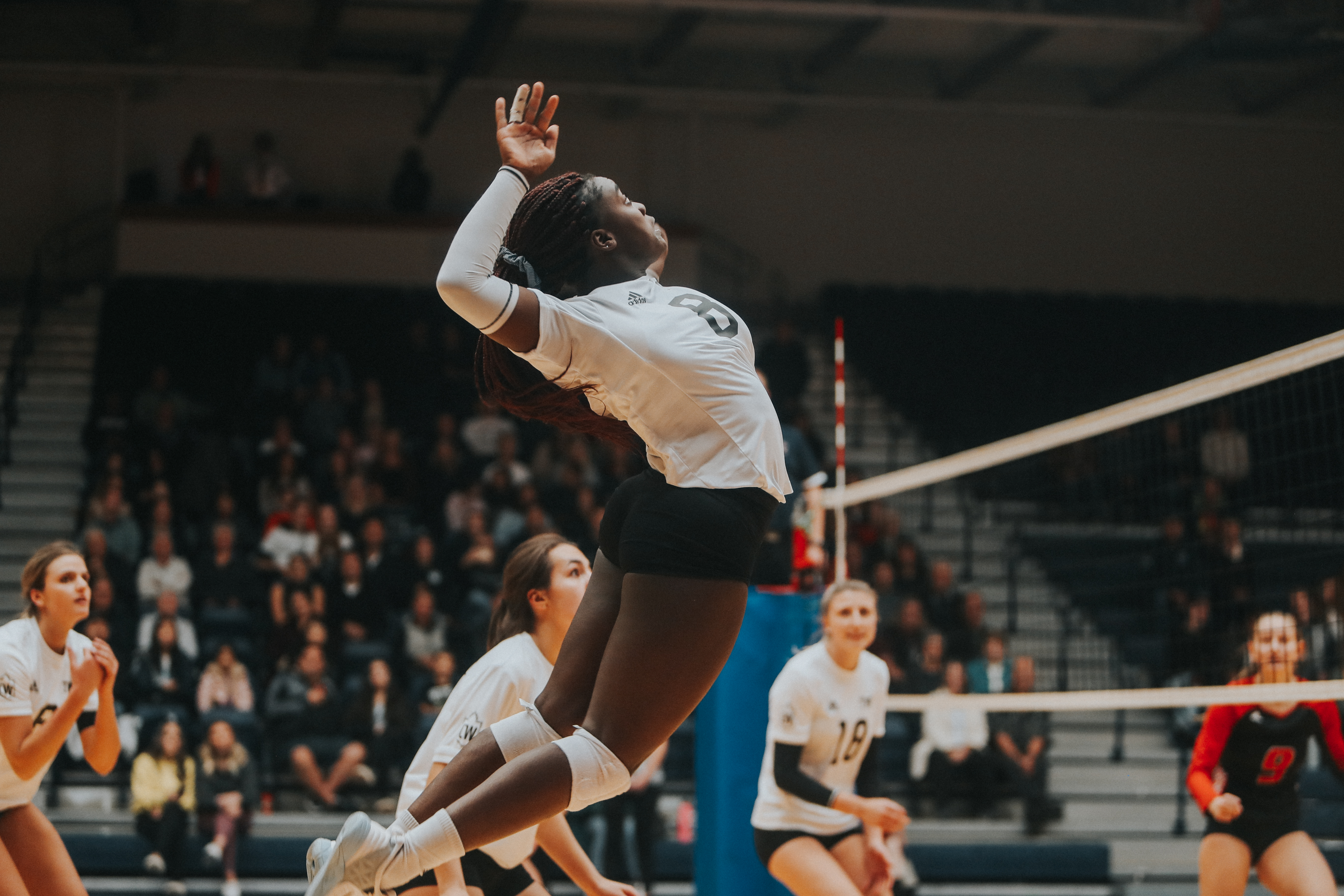 It was a record-breaking season for Trinity Western’s women’s volleyball team, to say the least.

Led by head coach Ryan Hofer, the defending Canada West champion Spartans came out of the gate strong by winning eight in a row and 14 of their first 15 games of the season – ultimately setting a new program-best record of 22-2.

Headlined by first team all-star Hilary Howe, the Spartans boasted at least one athlete within the top five of nearly every statistical category. Howe ranked second in conference kills per set (3.95) and third in service aces-per set (.057), Avery Heppell ranked second in hitting percentage (.348), and Mikaelyn Sych led the conference for the second consecutive season in blocks per set (1.30). 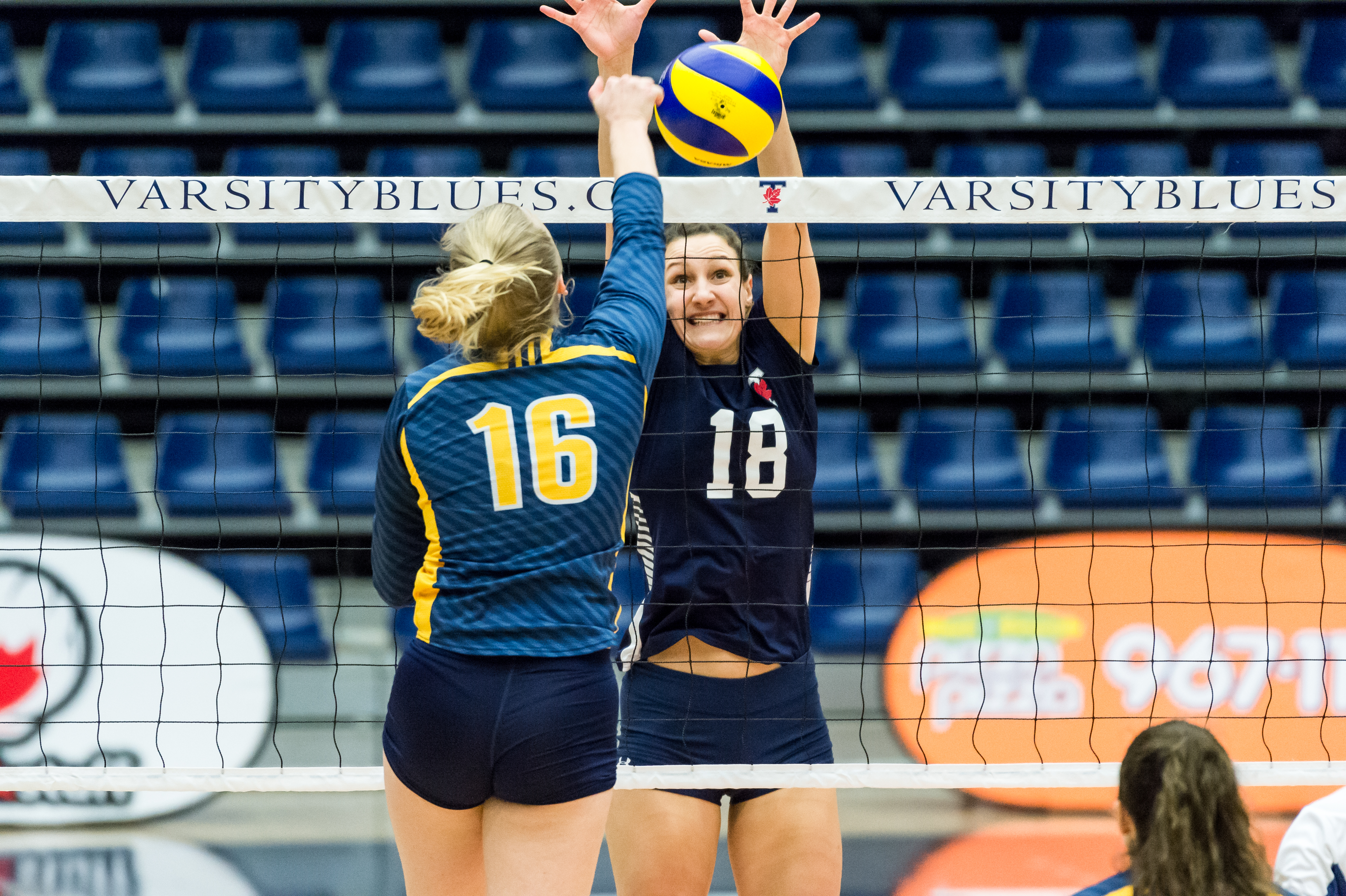 The Toronto Varsity Blues women's volleyball team won their second consecutive OUA title with a 3-0 victory over the Brock Badgers on Saturday night.

The Blues earned hosting rights to the OUA Final Four as the top seed in the East (17-4 record) after defeating the Waterloo Warriors in straight sets in quarterfinal action.

Fifth-year right side hitter Alina Dormann finished the season ranked second in the province with 4.3 points per set and third with 3.51 kills per set. The four-time all-Canadian and fellow fifth-year veteran Anna Licht led the Blues with 35 and 34 serving aces, respectively. Licht highlights U of T's depth, which sees five players averaging over 2.4 points per set. The middle blocker from Toronto topped the Blues with 51 total blocks. She, along with third-year middle Jenna Woock, are vital to the Blues success in the middle.

On the left side, U of T boasts a strong hitting duo in Caleigh Cruickshank and Hope Kotun. Cruickshank, a fifth-year veteran and nursing student, has averaged 2.5 points per set, while Kotun has had a breakout second half for the Blues, averaging 2.4 points per set. 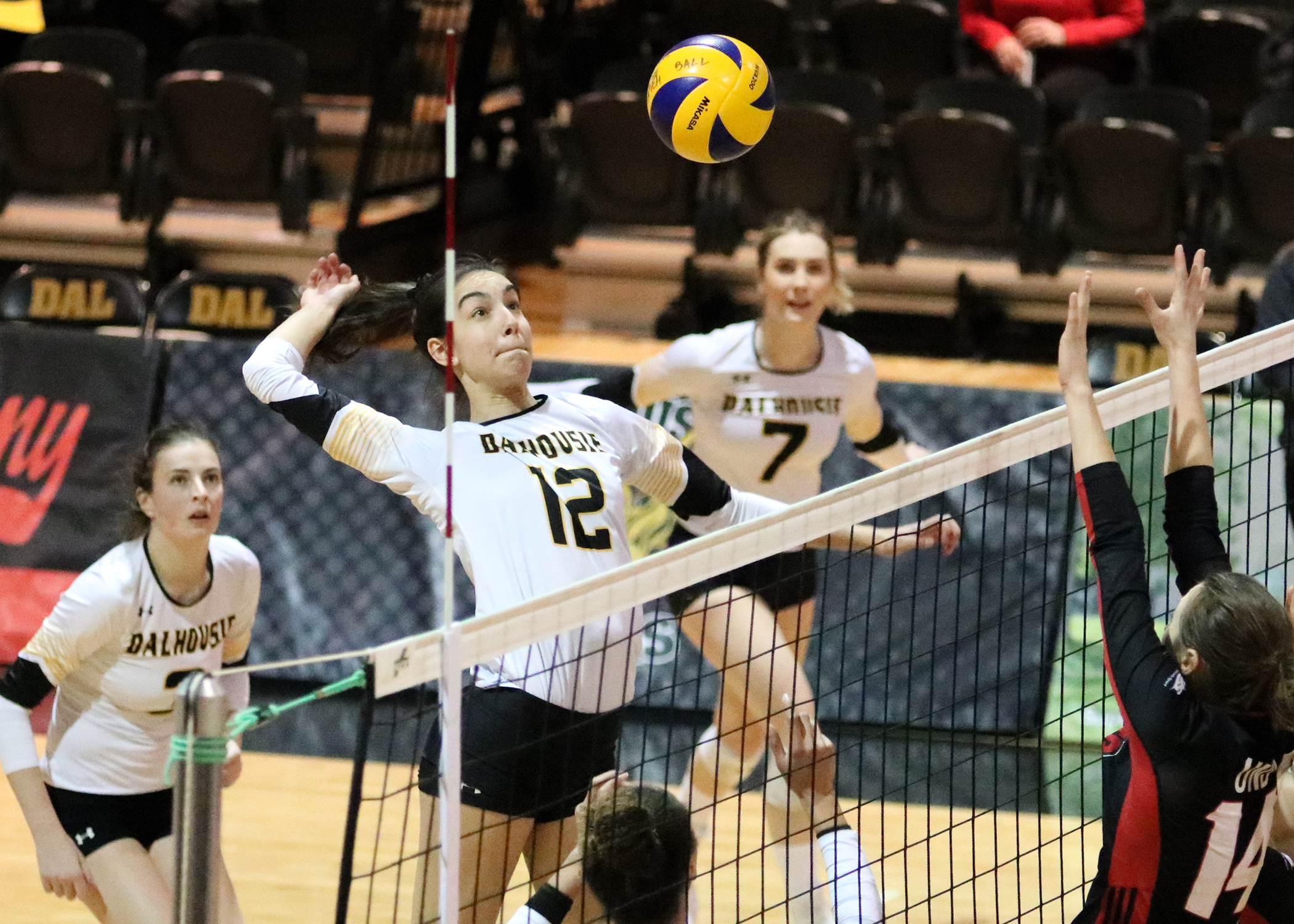 Led by three-time AUS MVP Courtney Baker, the Tigers were a force to be reckoned with in the AUS conference all season long. 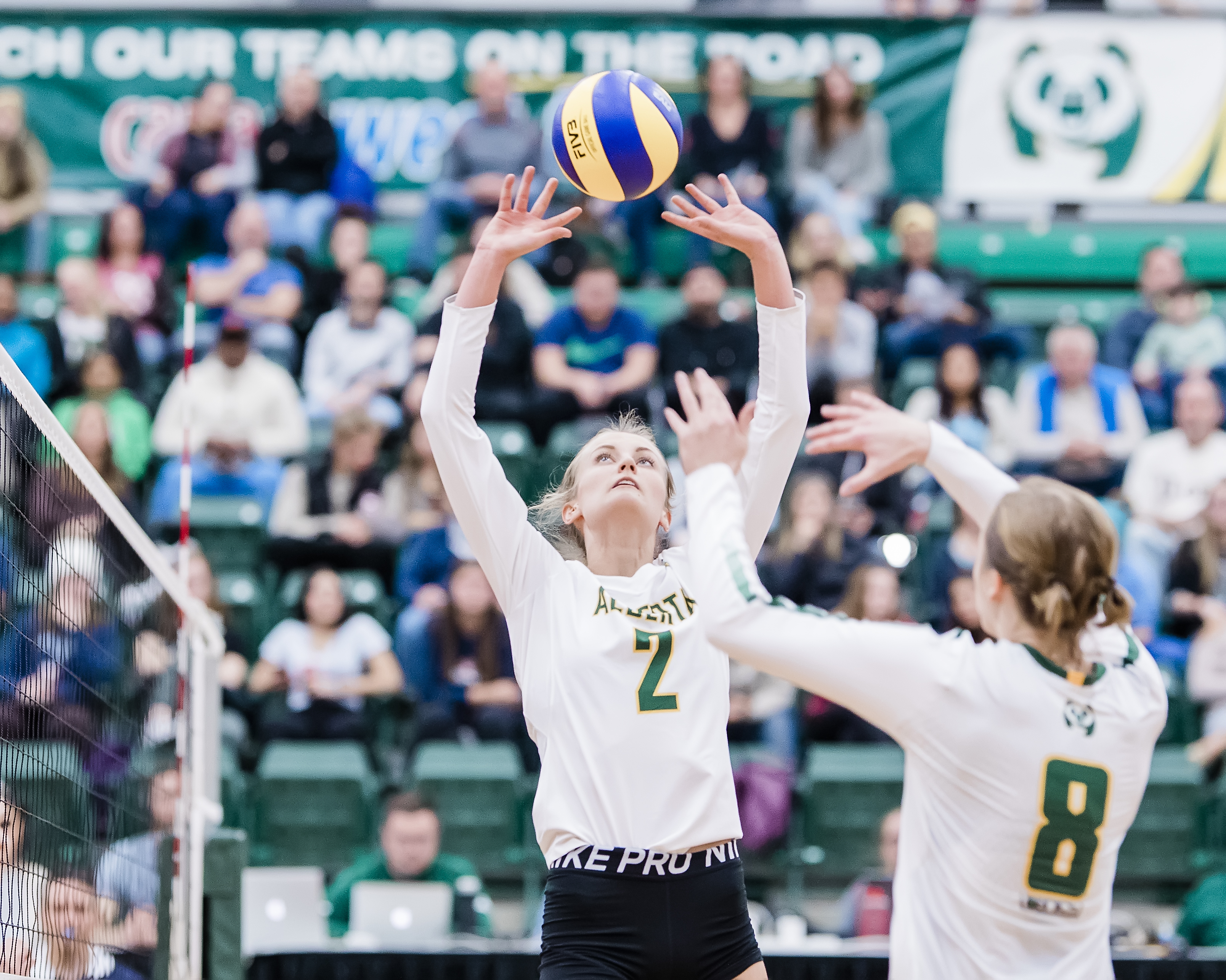 Coming off a Canada West silver medal, the Alberta Pandas head down to Calgary in search of a fourth-straight medal at the U SPORTS Championship, and their first gold since 2007.

Led by Canada West Player of the Year Kory White, the Pandas finished the CW regular season in third, before beating both Saskatchewan and Mount Royal in the conference post-season. The Pandas fell to Trinity Western in the Canada West final, earning the program’s ninth conference silver. 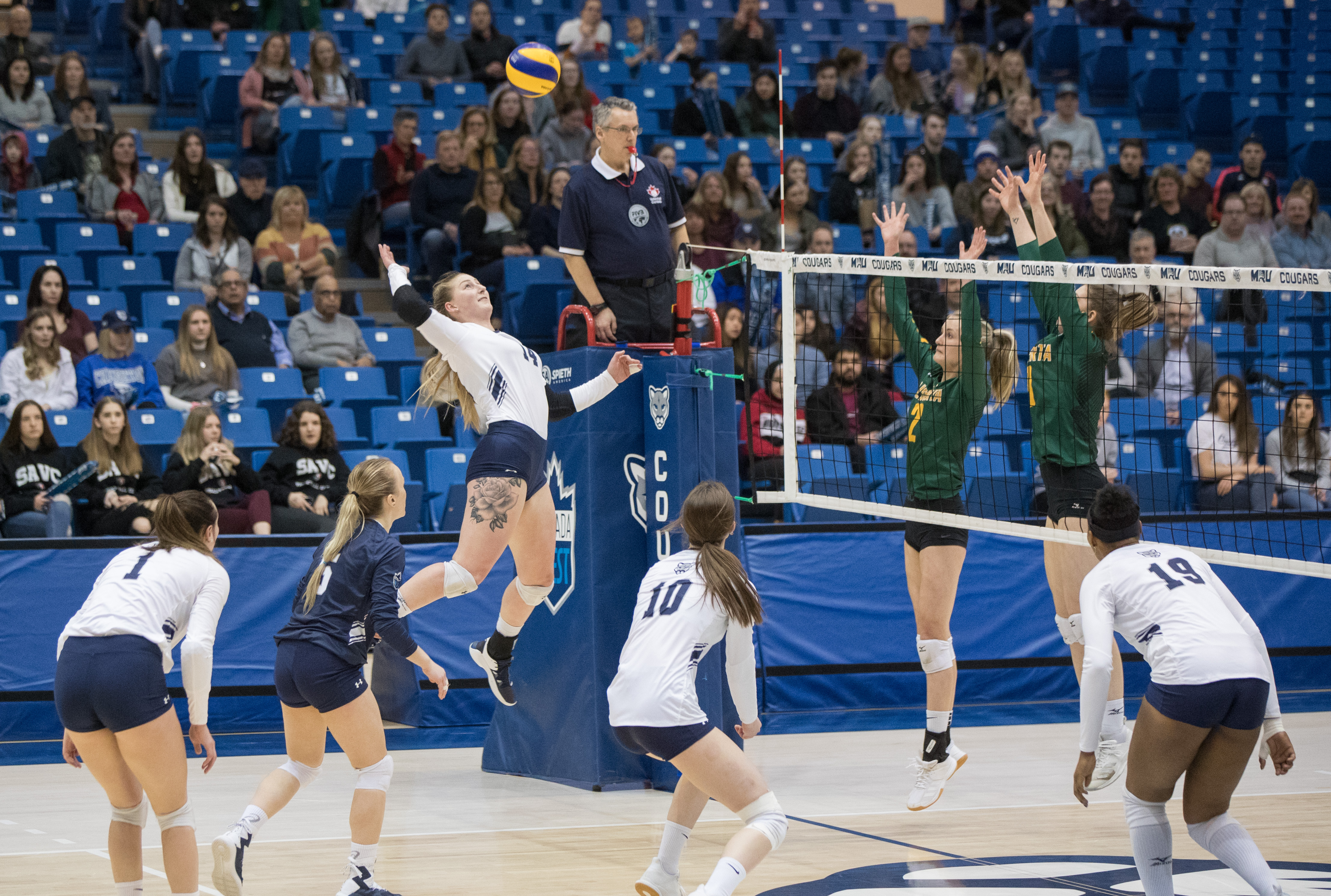 The Mount Royal University Cougars are coming off the most successful year in program history. Their 21-3 record put them second in Canada West and they reached as high as fourth in the country. After capturing the Canada West bronze medal, MRU enters into their first ever National Championship since joining U SPORTS eight years ago.

The Cougars are highlighted by Canada West first team All-Star Dholi Thokbuom who led the conference in hitting percentage (0.386) and was fifth in blocks per set (1.14). Fifth-year Chantel Park was named to the Canada West second all-star team after leading the league in aces (63). She also made history by reaching 159 career aces and becoming the third all-time in the conference. Lastly, team captain and setter Quinn Pelland, was also named to the Canada West second All-Star team as she finished third in assists per set (9.70). 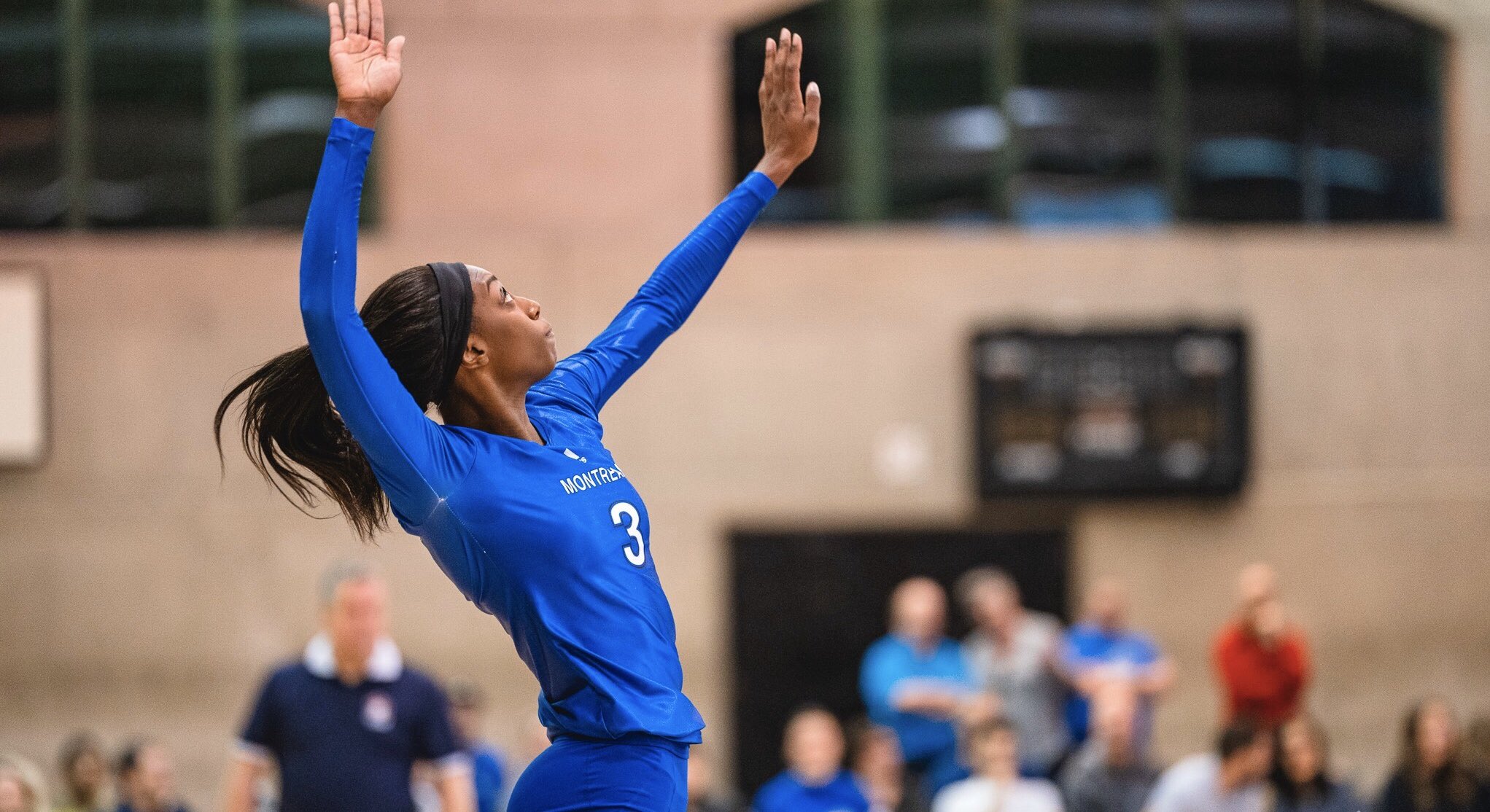 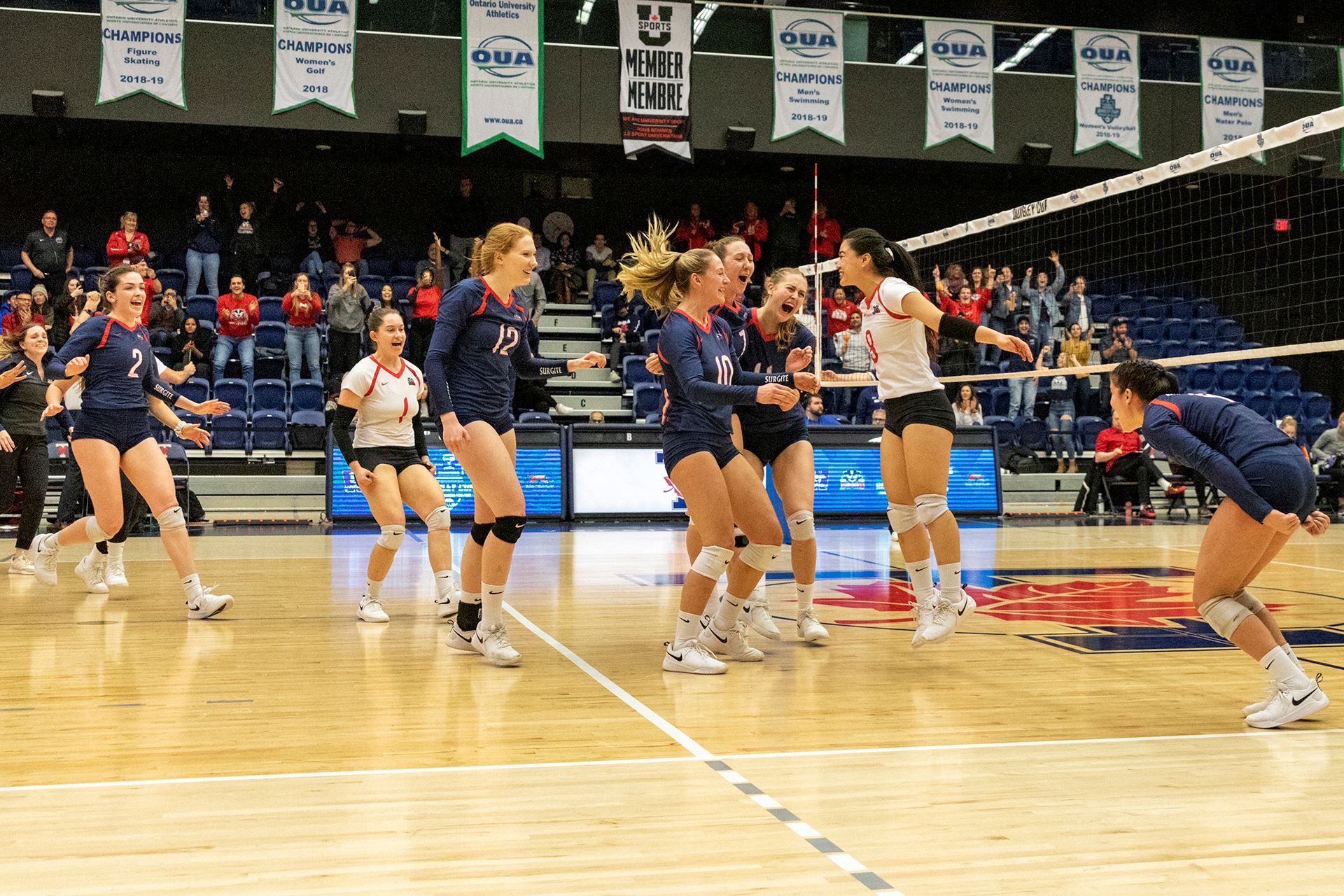 Head coach Steve Delaney’s roster compiled an impressive 14-5 record in the regular season, thanks in part to an attack that was often too difficult for opponents to overcome. The No. 8 Badgers ranked first in the OUA in both kills per set (12.11) and assists per set (11.59), while also finishing second in both hitting percentage (.227) and in total assists (823).

One of the roster standouts was veteran left side Laura Condotta ranked second in the conference with 257 kills. Fourth-year setter Emily Armstrong, the conference leader in assists per set (9.11), was usually the one getting Condotta in the right position to finish. While Condotta and Armstrong showed the poise expected from battle-tested players, rookie libero Aleiah Torres lead way in digs with 182 (tied for 12th in the OUA).

Brock took down the York Lions in straight sets in the quarterfinals, before beating Guelph to qualify for their first national championship. They then fell to the Toronto Varsity Blues in the OUA title match. 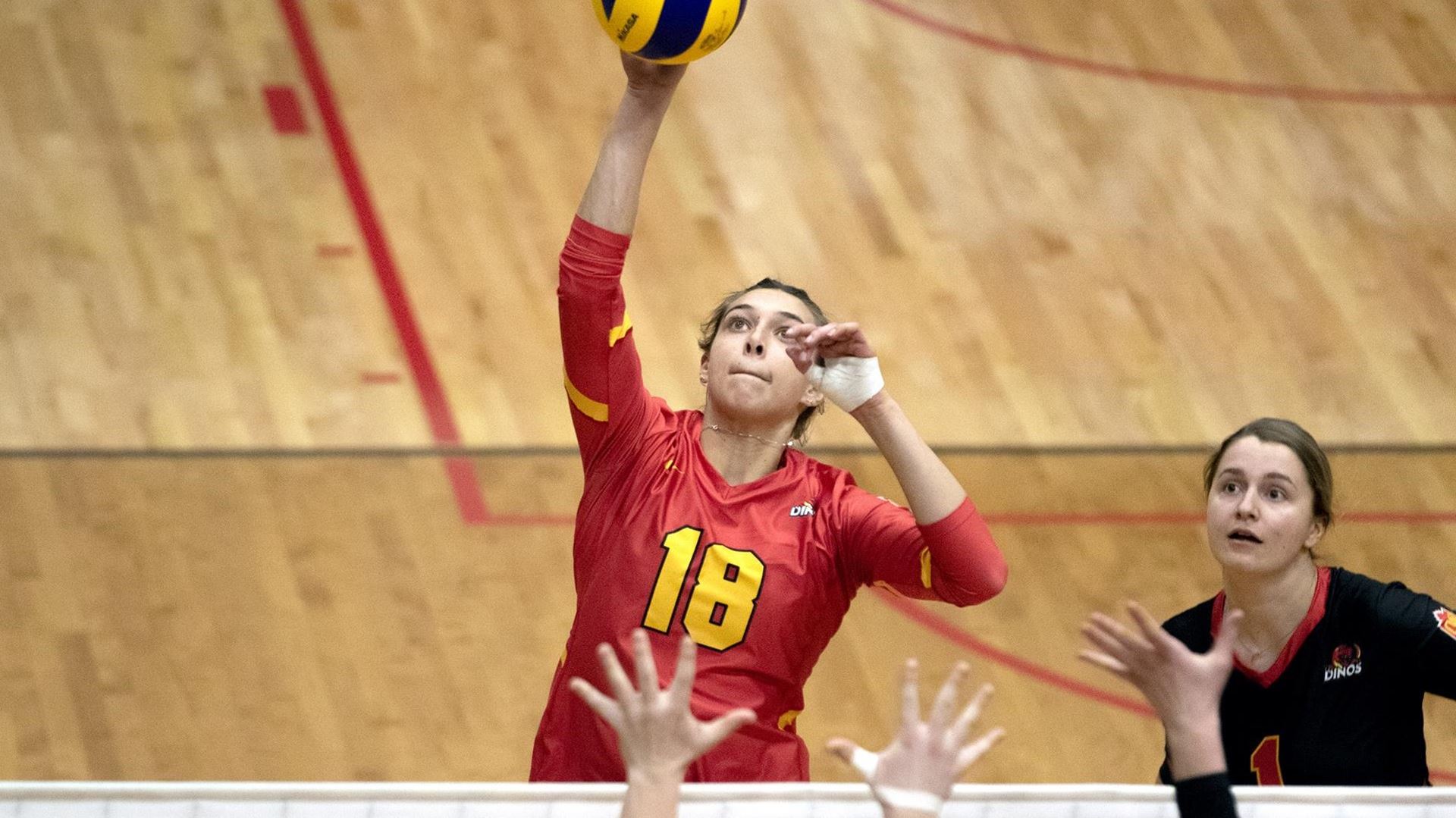 The host Dinos make their third straight appearance at the national tournament after an up-and-down season that saw them finish tied for the final playoff spot in Canada West, which they lost on a sets won/lost tiebreaker.

The Dinos boast plenty of experience with six fifth-year players on the roster, all of whom will wrap up their varsity careers next weekend. That group includes former Canada West player of the year and three-time All-Canadian Kate Pexman, who has moved into a defence-only role this season after sustaining a knee injury late in 2019, along with two-time All-Canadian middle Beth Vinnell. Senior libero Kennedy Snape anchors the defence, with Autumn Davidson joining Vinnell in the middle with Adriel Goodman on the right side. The Solecki sisters, fifth-year Rachel and first-year Trinity, join Kenzie Vaandering on the left side for the Dinos.

The core group has won a Canada West championship and captured two regular season pennants in the toughest conference in the nation, and at their best have pushed the top teams to the limit. They’ll face a familiar opponent in the Spartans, who they went to a tight five-set match with late in November.