The UBC Thunderbirds delivered a huge statement on Sunday, knocking off the two-time defending champion Trinity Western Spartans in straight sets to etch their name on the Tantramar Trophy ending a 35-year drought at the TELUS 2018 Men’s Volleyball Championship Sunday at McMaster University.

“It’s awesome to win one for the program.” said UBC setter and Tournament Most Valuable Player Byron Keturakis. “We have so much support from our teammates, our coaching staff, our trainers, parents and alumni, and it’s really cool to be a part of that bigger family.”

Keturakis thought earning the title against a team of the Spartans’ quality was an extra cherry on top of the championship crown. 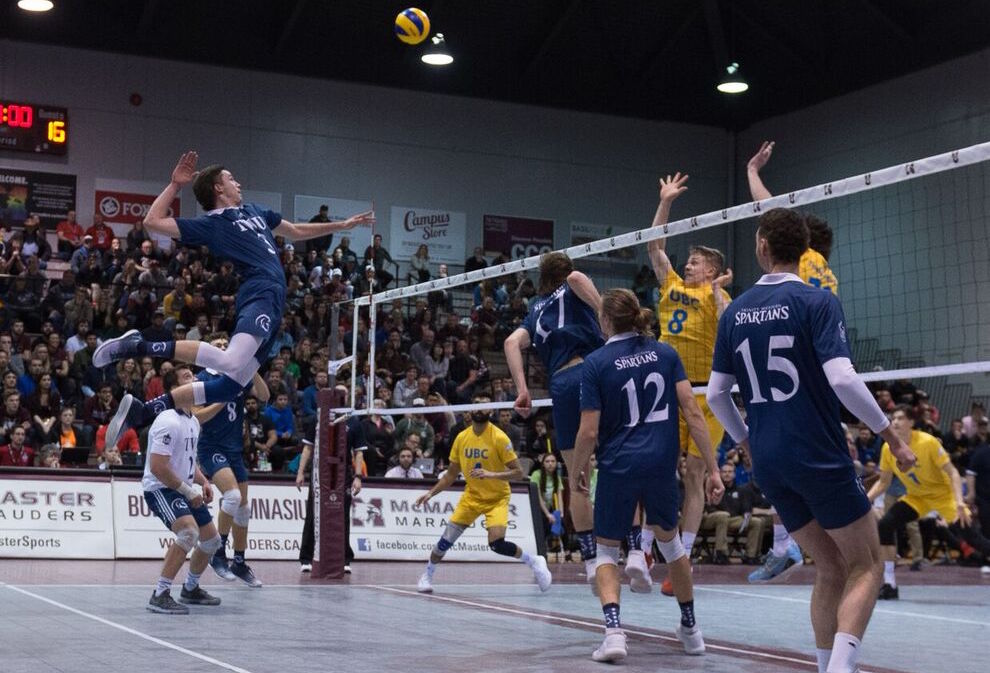 Keturakis was a big reason the UBC offence hit its stride today, as he cycled the ball to balance the Thunderbirds’ attack. He tallied 31 assists in spurring the offence, while Fynn McCarthy benefited to lead the team with 11.5 points in the championship win.

For Trinity Western, Eric Loeppky was the top scorer, recording 13 points, while Jessie Elser posted 11 in the loss.

Trinity Western coach Ben Josephson saw a Spartans team that was denied their rhythm and comfort by constant Thunderbirds pressure.

“They did what they do best and they served with a ton of pressure,” said Josephson. “I thought our receivers did a good enough job of not getting aced, but the problem was that we weren’t really in a position where we could run our middle or pipe offence, which is what we build around.

“Their service game is the one thing in the country that scared me the most, and I think we saw why.” 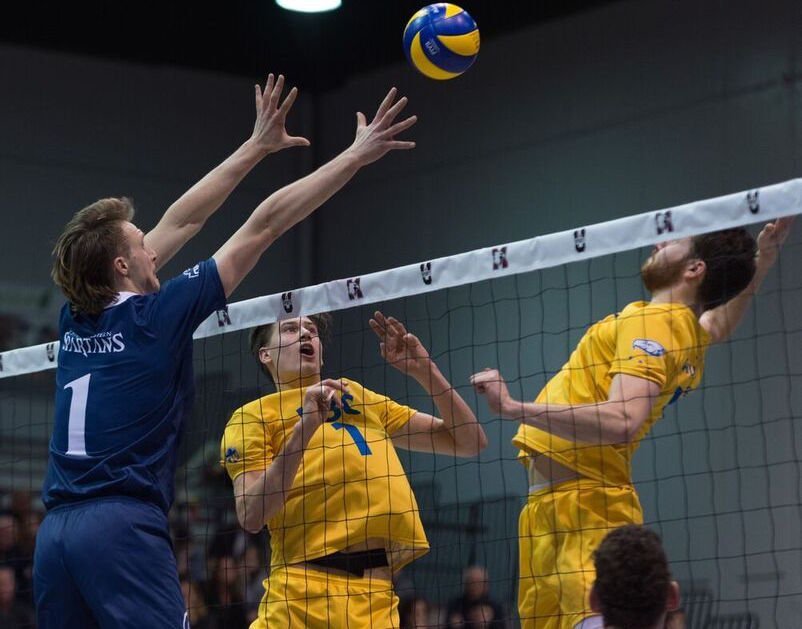 The Thunderbirds roared out of the gates in Sunday’s final, and built a 16-13 lead at the technical timeout in the first set on a kill from Fynn McCarthy. Keeping things interesting as the set moved toward its endpoint, the Spartans closed within two points on several occasions but could get no closer, and UBC ended the set when Trinity Western’s Jesse Elser blasted a serve well long of the back line.

Locked at eight early in the second, the Thunderbirds engineered a crucial 8-1 run with Joel Regehr at the service line to race into the technical timeout with a 16-9 advantage. Much as they did in the first, UBC showed no nerves in holding their well-earned lead, and rode another 4-1 streak to a commanding 20-12 cushion.

The Spartans made their move midway through the third set, ripping off three straight points from 11-10 to force the Thunderbirds into a timeout. The margin was three points at the technical timeout, after Schriemer took matters into his own hands. 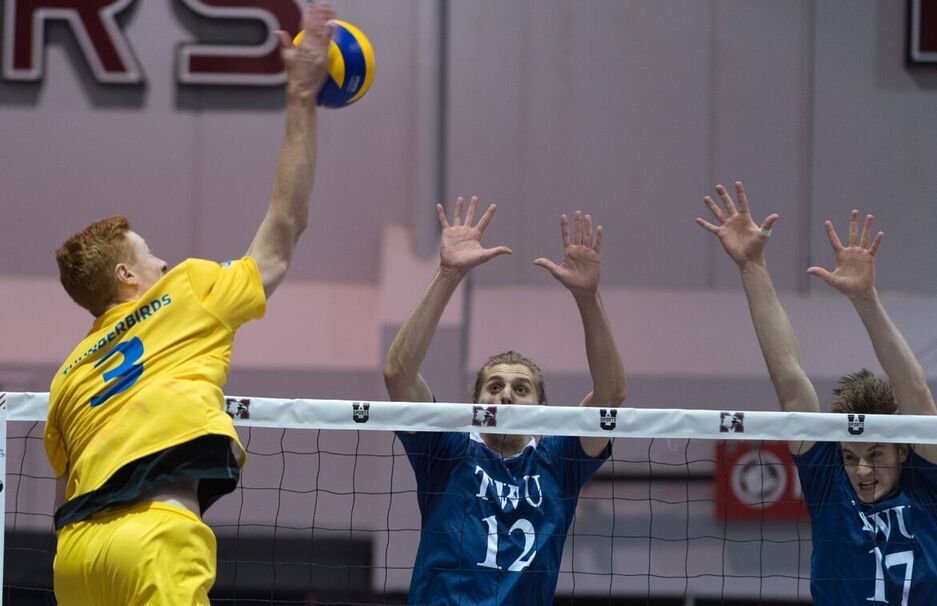 But UBC was not to be denied, and despite trailing 23-21 late, the Thunderbirds struck back to force extra points. A string of three consecutive points brought up a UBC championship point at 24-23 after a service error from Elser, but the Spartans produced an incredible defensive stand - including a diving stab from Schriemer -- to extend the night.

Trinity Western enjoyed a set point of their own before it was over, but saw it erased by a kill from West, and UBC made good on their second championship point when West kissed tape with the attack before it bobbled to the floor.

Brar, who was named to the Tournament All-Star Team, was elated after being told UBC had just erased a 35 year drought. “It’s sweet. We were in a dry spell for quite a long time, and it’s nice to see the progress from last year and into this year’s team, with the addition of a few pieces like Keith West and Fynn McCarthy, and it all came together pretty sweetly.” said Brar.  “Coach K is killing it for us and we’re so happy to get a national championship for him and for us.”

UBC was one of the two teams to hand Trinity Western a defeat in the regular season, the other being Brandon. The Thunderbirds beat the Spartans 3-1 back on Feb. 9

The Thunderbirds’ last appearance in the men’s volleyball final came in 1984, one year after they claimed the national title. UBC’s run to the championship included a straight set victory over UNB in the quarter-final match, and a 3-1 semifinal victory over Alberta.

Prior to tonight's 3-0 defeat, Trinity Western had not been swept by a team in 50 matches. That loss came back on Jan. 7, 2017 vs Saskatchewan in Langley.

UBC head coach Kerry MacDonald expected a fight from the Spartans in set three, as rare as one-sided results are for Josephson’s program. “I knew after we won that second set fairly comfortably what we were on the brink of,” said MacDonald. “The message to the guys was, ‘let’s not expect that to happen again.’”

“We had two fairly comfortable sets there, and lopsided wins against Trinity Western don’t happen too often. We knew that we were in for a battle in that third, but we battled back and were able to take it.