The Brandon Bobcats have been named men’s volleyball tournament favourites in the lead-up to an action-packed weekend of #CHAMPSZN.

First serve of the 2019 U SPORTS Men’s Volleyball Championship Presented by Hôtel Universel Quebec, hosted by the Laval Rouge et Or in Quebec City, flies on Friday at the Amphithéâtre Desjardins-Université Laval. The tournament concludes next Sunday with the championship final at 4 p.m. ET / 1 p.m. PT. All games livestreamed at USPORTS.LIVE. 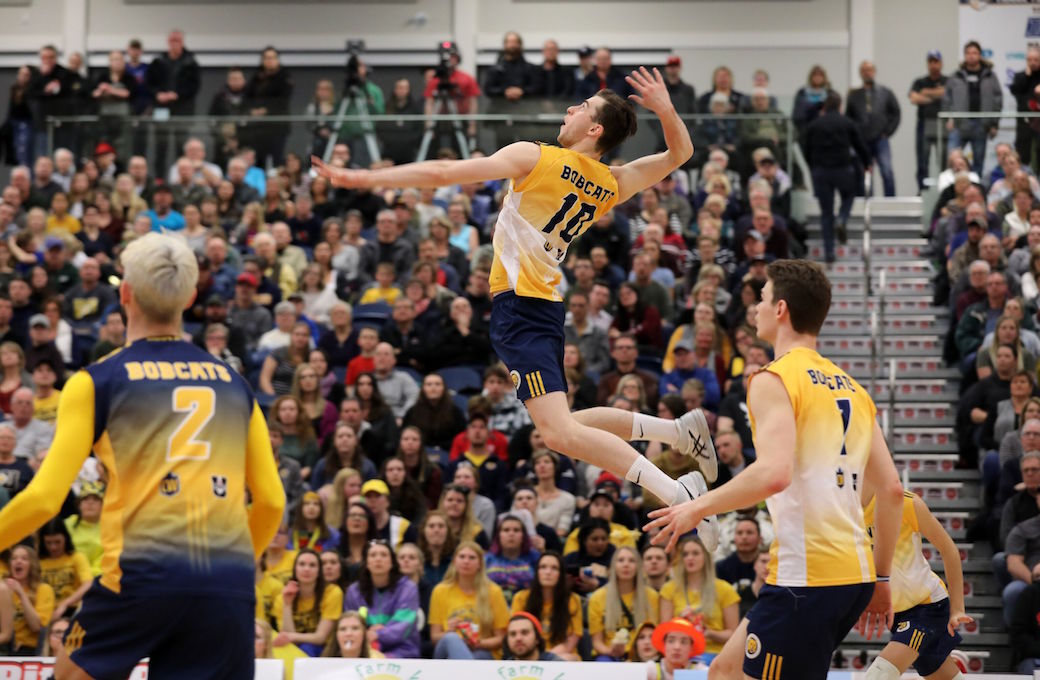 The Bobcats are coming off the most successful season in program history. A 20-2 conference record was punctuated by capturing the No. 1 national ranking following a weekend sweep of the then top-ranked Trinity Western Spartans to start the second half of the year. It was the first No. 1 ranking in program history, which the Bobcats retained for the entire second half of the season.

The Bobcats had an 18-match win streak ended in the Canada West semifinals by Mount Royal, the only team to beat them in conference play. Brandon battle back to take the next two matches against the Cougars to book their spot in the Canada West conference championship as hosts, which was another program first. The Bobcats captured the program’s second Canada West conference championship and first on home court 8 by beating the Trinity Western Spartans 3-2 (25-23, 18-25, 25-21, 22-25, 15-12) on March 8.

The Bobcats won all four major Canada West conference awards as well, as Robin Baghdady was named Rookie of the Year, Seth Friesen won the Student-Athlete Community Service Award, Grant Wilson was named Coach of the Year, and Elliott Viles was named the conference’s Player of the Year. 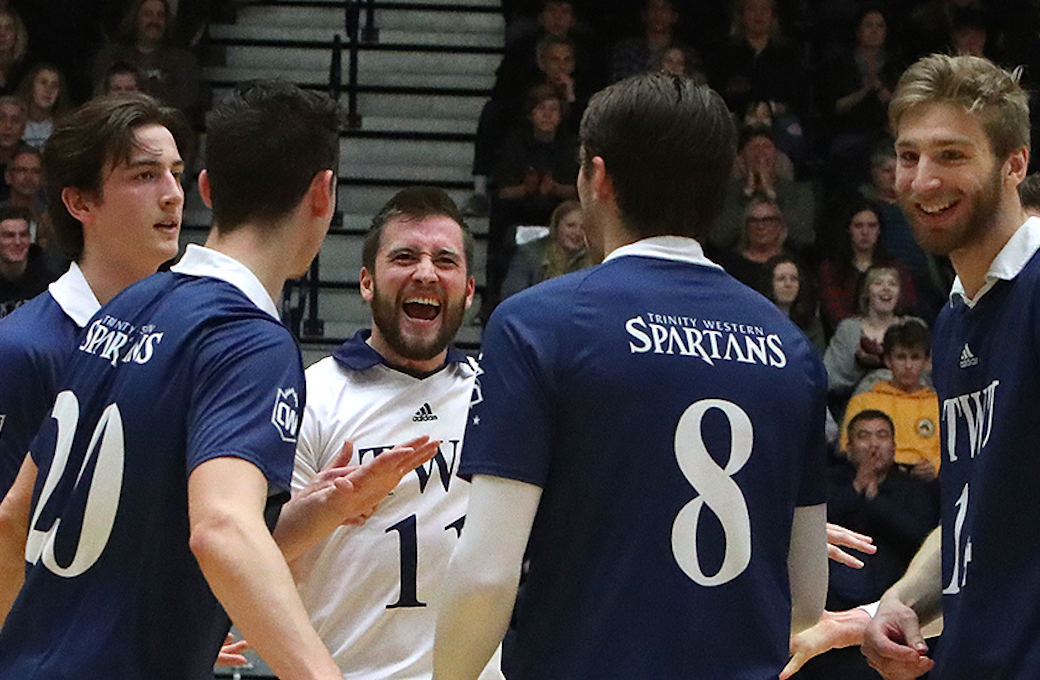 The Trinity Western Spartans will play in the U SPORTS championship tournament for the 10thyear in a row, having also earned a spot in the Canada West title game for the eighth straight season. The Spartans spent three weeks atop the U SPORTS rankings this year. The team dropped as low as No. 4 in mid-January before climbing to No. 2 for the final five weeks of the season.

The Spartans were led by Canada West First Team All-Stars Eric Loeppky and Jacob Kern, as both dominated on the attack and from the service line. Along with TWU’s leading duo, the Spartans middle contingent of Aaron Boettcher, Jackson Howe and Pearce Eshenko proved to be amongstthe most dominant in the country, helping TWU average 2.65 blocks per set (2nd in CW). Setter Derek Epp finished the year third in CW with 9.74 assists per set, while libero Carter Bergen averaged 2.09 digs per set (9th in CW). The Spartans also finished second in CW in hitting percentage (.325), aces per set (1.92) and points per set (16.9). 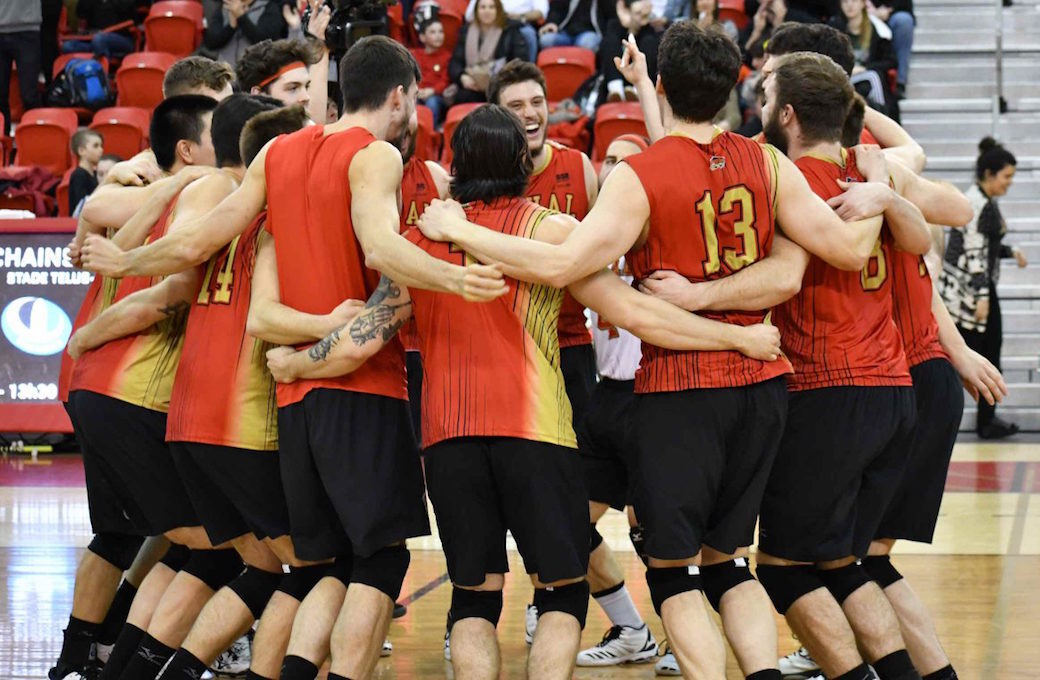 The Rouge et Or men’s volleyball team had their first perfect regular season since the 2012-13 campaign, when Laval won its last national title. On their path to a 16-0 record, the team led by the RSEQ coach of the year, Pascal Clément, has lost four of the 52 sets played in the regular season in a revamped conference with the addition of UNB and Dalhousie from the AUS. Outside hitter Vicente Parraguirre, was named the RSEQ’s most valuable player for the fifth year in a row, a first in the conference’s history. Parraguirre has dominated U SPORTS on offence with an impressive .448 hitting percentage, in addition to being second in kills per set (4.74). During the playoffs, the Rouge et Or easily swept the Dalhousie Tigers in two games. Then Laval got its revenge against the Montreal Carabins, who beat them in last year’s RSEQ final, to earn their 20th provincial title in the past 22 years. 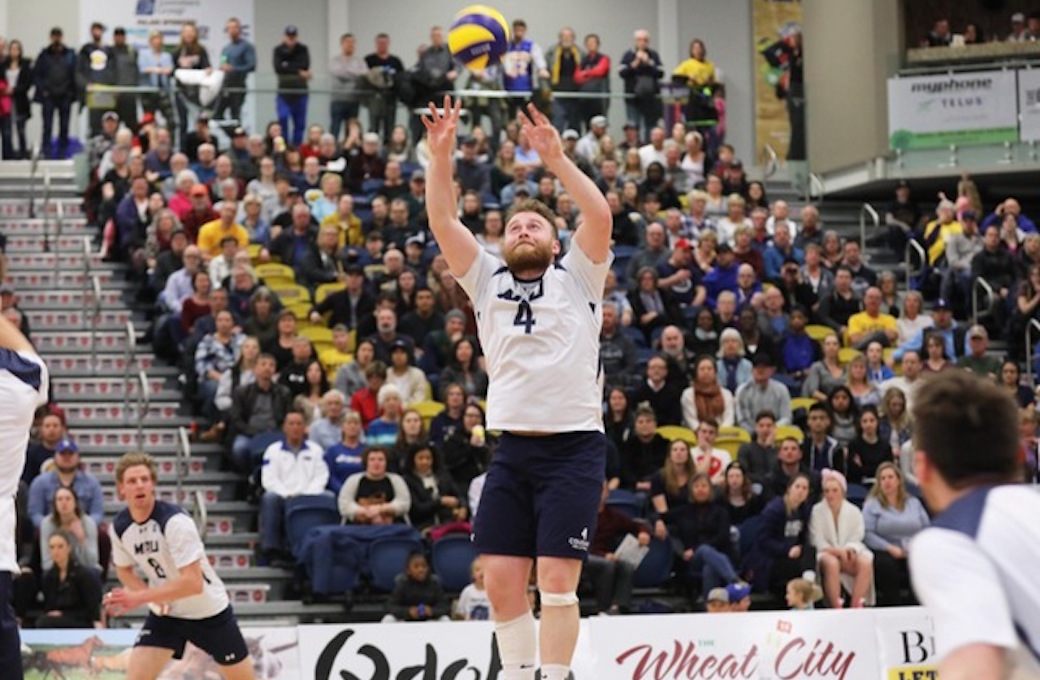 The Mount Royal Cougars put together the best season in program history, finishing fourth in the conference with a 15-7 record. The Cougars were consistently ranked in the U SPORTS Top 10 and got to as high as third in the nation. They had a very consistent year, never losing more than two games in a row. MRU was tough to play at home with an 8-2 record, including a sweep of the No.1 Brandon Bobcats.

Their team was led by fifth–year Tyler Schmidt, who broke multiple Canada West records in the last weekend of the regular season. He became the all-time leader in career points and kills and was awarded a First Team All-Star. MRU’s setter Tanner Greves was a Second Team All-Star and Louis Lange was on the All-Rookie team. Men’s volleyball is the first Mount Royal athletic team to qualify for the U SPORTS national championship ever. 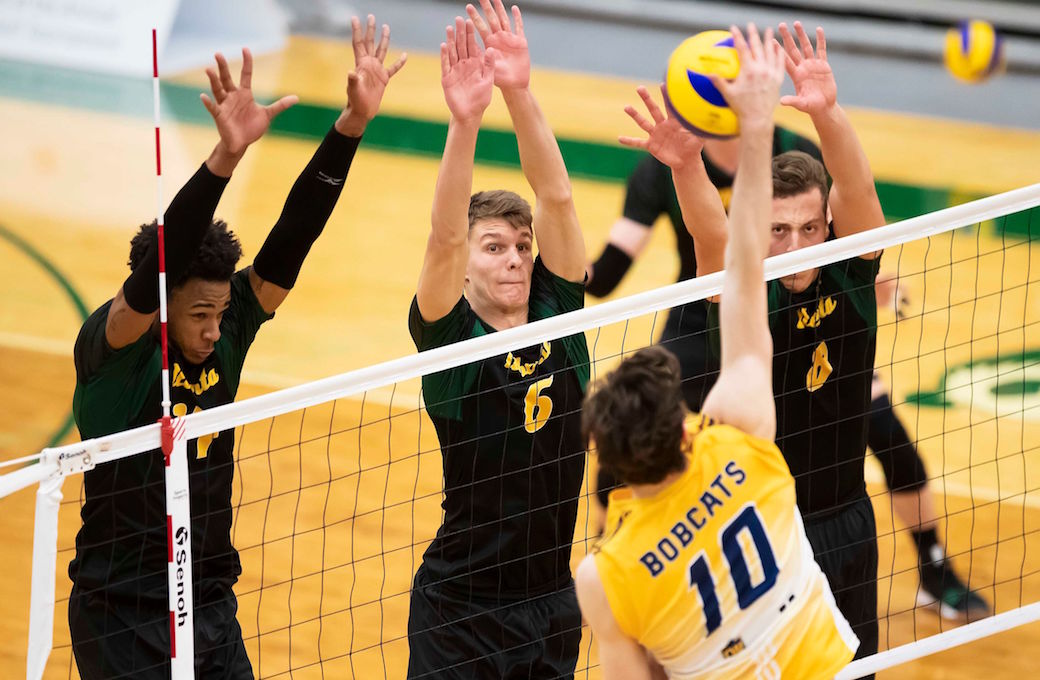 Despite failing to qualify for the conference semifinal for the first time since 1988, the Golden Bears advanced to the U SPORTS Championship for the 19th straight season.

The Golden Bears finished third in Canada West with a 17-5 record, and were continually ranked inside the top seven in the U SPORTS rankings. However a poor showing in the quarterfinal against Thompson Rivers saw them get swept 2-0 at home.

Alberta has captured eight national titles, seven of which under Terry Danyluk, and are looking for their first since winning back-to-back in 2014 and 2015.

The Bears are led by fifth-year First Team All-Star Alex McMullin, who finished the season as one of only five Bears ever to finish their career with 1,000 kills. Third-year Taryq Sani also finished with another all-star season, leading the team with 3.73 kills per set. 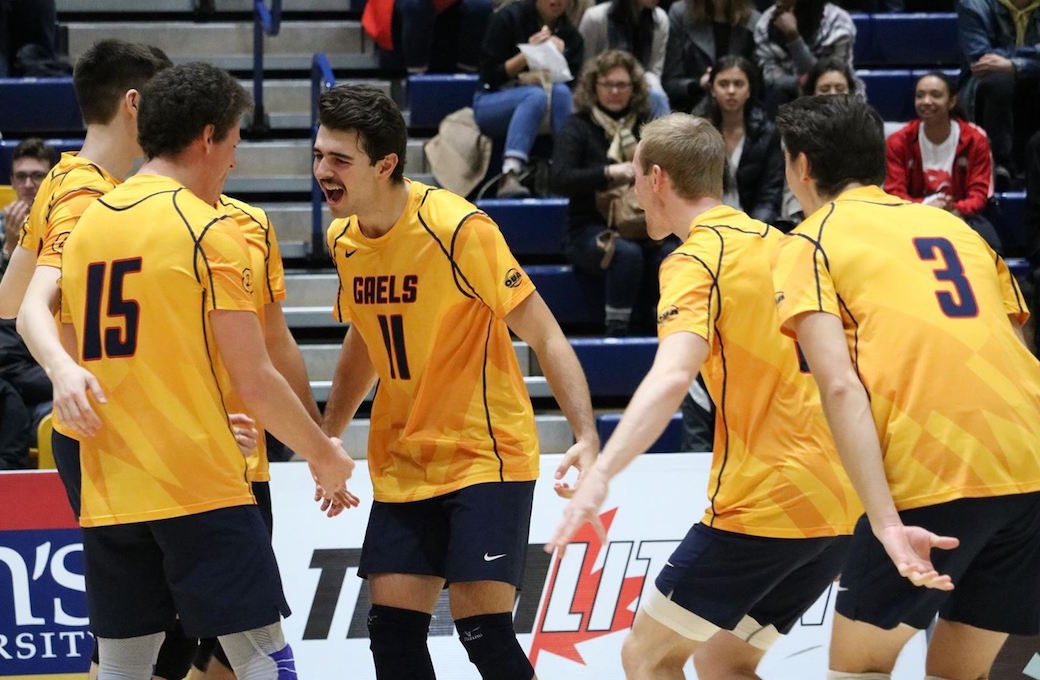 The first season as head coach of the men’s volleyball program at Queen’s for Gabriel DeGroot was a memorable one. The Gaels dropped a tough match to Windsor in his home debut and after the first two weeks of the season were sitting at 2-2 with a date at the reigning OUA champion and then No.1 nationally ranked Marauders next on the schedule. The Gaels finished off a five-set thriller 15-13 to complete the upset and set the course for the remainder of their season. The Gaels nearly ran the table the rest of the way, finishing 13-1 after their 2-2 start to the season.

The Gaels saw DeGroot named OUA East coach of the year, while Zac Hutcheson was the recipient of the East Division's Dale Iwanczko Award of Merit. Queen’s also sported five OUA All-Stars with Zane Grossinger joining Hutcheson on the first-team, Adam Boljkovac teaming up with Dylan Hunt on the second-team and Shane Gabel receiving All-Rookie honours. 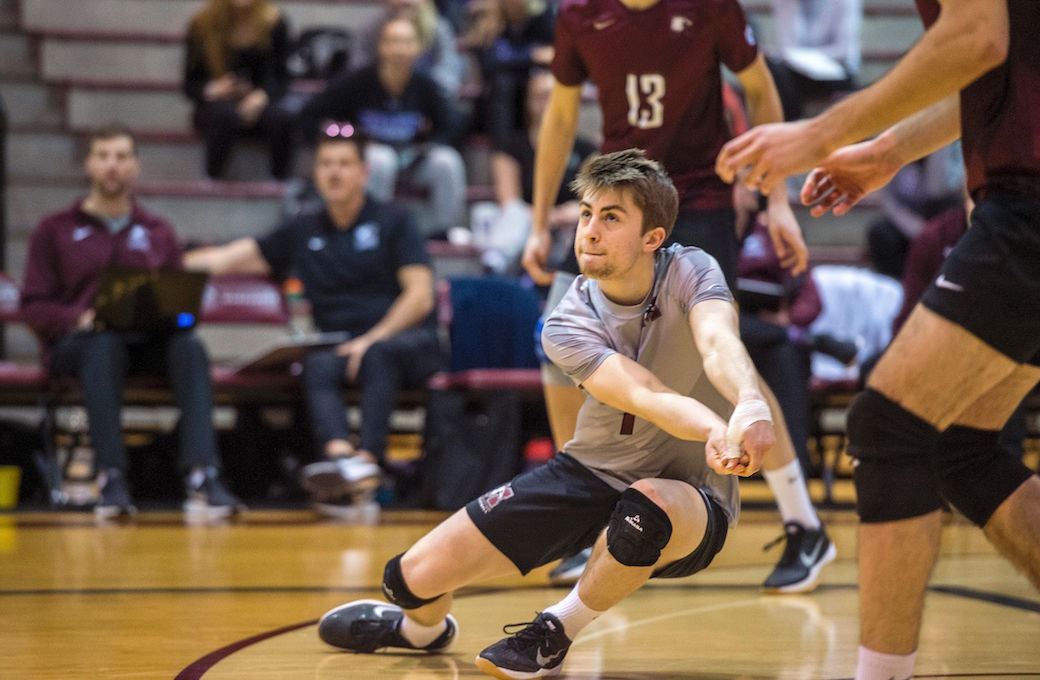 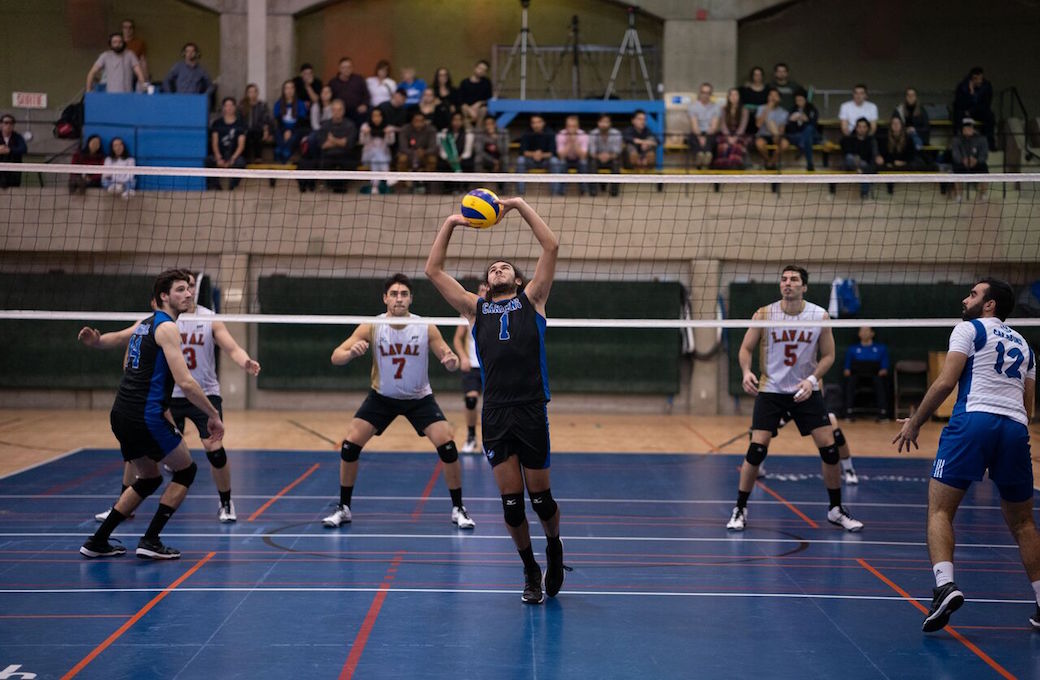 The Montreal Carabins went 12-4 on the season, finishing second in the RSEQ. Setter Gabriel Chancy was once again an important part of the team’s offensive success, with the law student also excelling in several other aspects of the game.

He recorded 16 aces, the second highest total on Montreal. On defence, he tallied an average of 1.94 digs per set, placing him second on the team. Despite several rookies and second-year players in the lineup, the Carabins managed to qualify for the national championship for a second consecutive year. 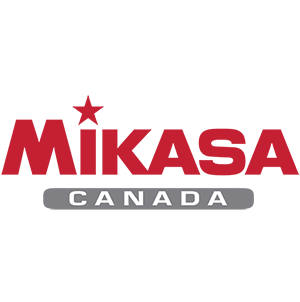