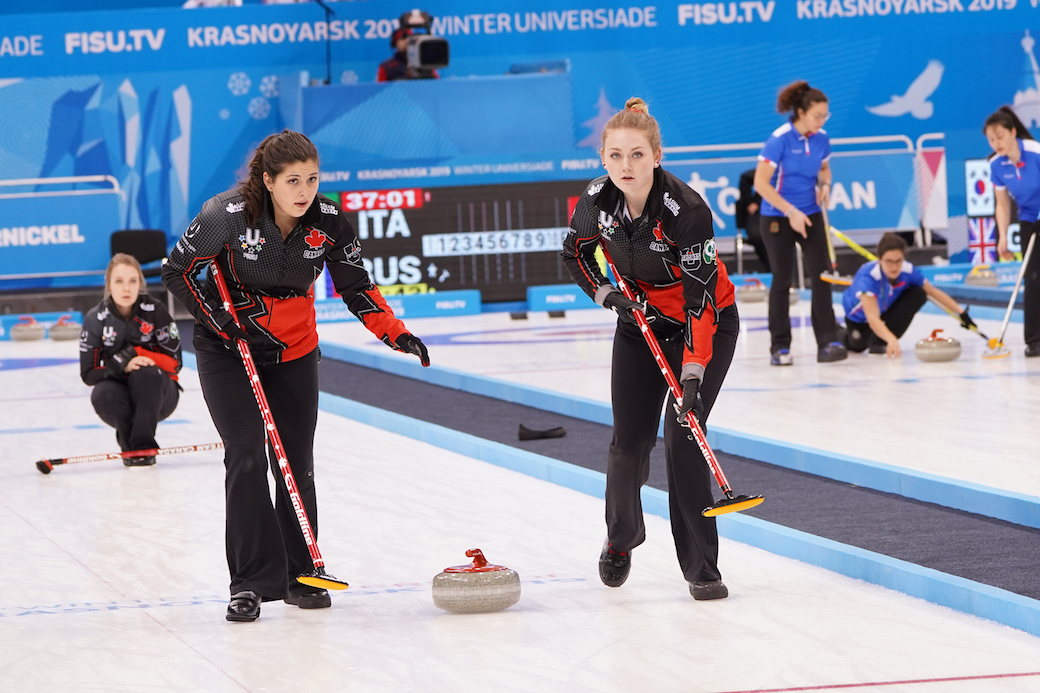 After the Czechs scored a single in the first, Canada took control of the game with a deuce in the second and another steal of one in the third. The big end came just before the break as Team Canada put up a three spot and led 6-1 after five. The Czechs had no response as after the break, they did not score again with steals in the sixth and seventh for the Canadians and the game ended after seven ends.

It was another game with hand shakes before the final ten ends for this squad as four wins at this Universiade have ended early (first win over China in six ends; second win vs. Japan in seven; third win against Switzerland in nine and then seven ends versus Czech Republic).

In addition, in the four wins in Russia, Canada has scored two or more points in 11 different ends.

Against the Swiss, the game was a high scoring affair and the Canucks found a way to score multiple times with the hammer (four ends) and salt away and thrilling victory. Canada had a three in the ninth end and stole one more in the tenth for the final gap.

In the evening, the Canadians made up of skip Karsten Sturmay (Alberta; Leduc, Alta.), third Tristan Steinke (Alberta; Dawson Creek, B.C.), second Christopher Kennedy (Alberta; Red Deer, Alta.) and lead Glenn Venance (Alberta; Kitscoty, Alta.) carried the momentum from the morning into the late draw and seemed ready from the get-go. They jumped out to a 3-0 lead after two and then 5-2 after five ends and continued to apply the pressure throughout on the Swedes and forced them into difficult shot making and controlling the game from the outset. 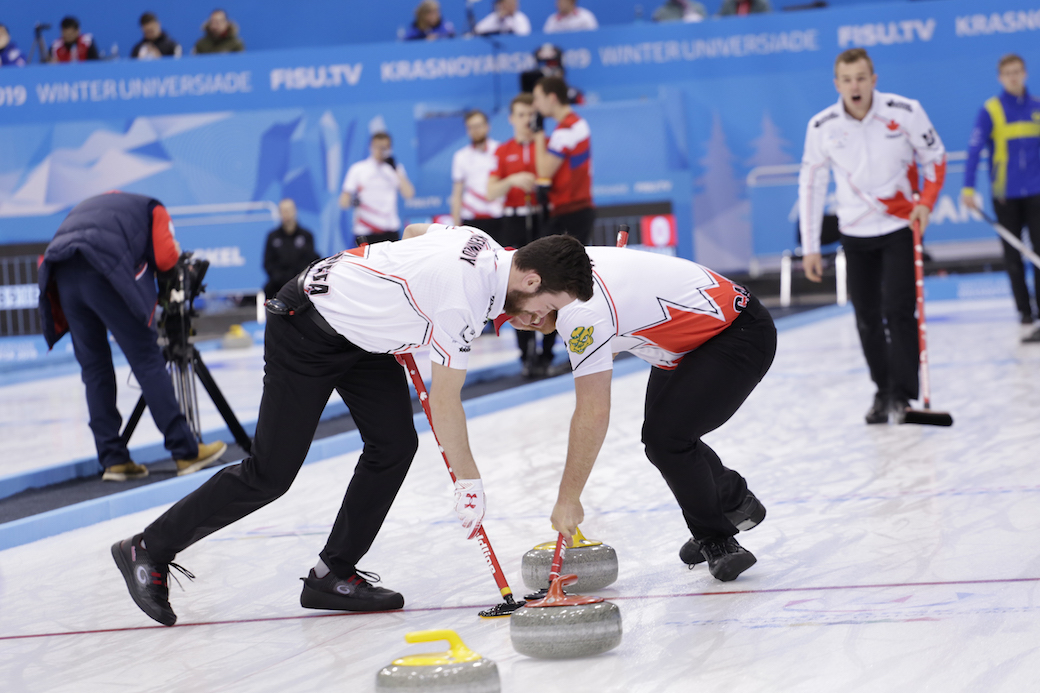 Sturmay was satisfied with the successful day on the ice, “It was a really great day. We knew we had to face two credible opponents today. We had our work cut out for us. I can’t say enough of the boys bringing their ‘A’ game today and can’t really ask for too much more than that.”

The Canadian women’s hockey team have now gone a perfect 4-0 after a 8-2 win over Switzerland (0-4) at the Pervomaisky Ice Arena. It was a big game for forward Katryne Villeneuve (Moncton; Casselman, Ont.) as she netted a hat-trick and an assist for a four point night.

“We didn’t get the start we wanted but we were happy with the bounce back and scoring the goals to extend the lead throughout,” commented a modest Villeneuve. “We are now looking forward to playing the home team in Russia as it will be a big test for us.”

The Swiss actually jumped on Canada early with a goal 3:30 into the game. That snapped the scoreless streak by both Canadian goalies as they had not allowed a goal in the first three games. 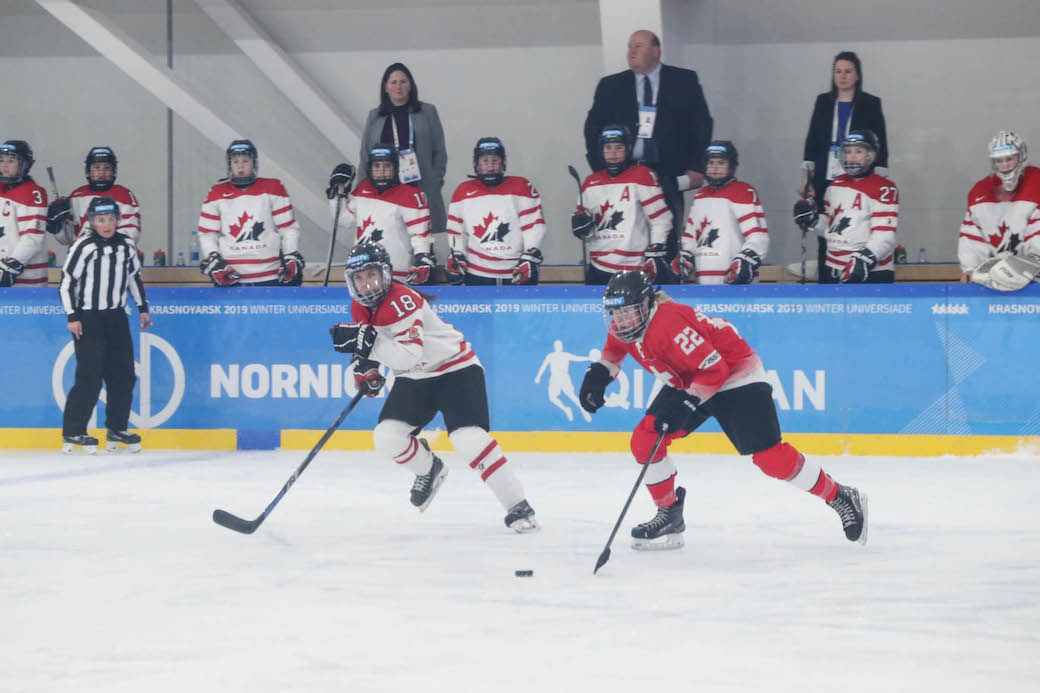 Canada found the net and after a nifty pass in the slot converted by Taylor Weber (Laurentian; Mount Forest, Ont.), they regained a 2-1 lead after the first. The second period had Canada lengthen the lead with a five goal barrage as Villeneuve had her hat trick before 40 minutes were over. After two, the maple leaf led 7-1 and then coasted to the win the third.

Up next is the big test as it is a battle of the unbeaten teams in Group A as Canada will now face the e host Russia on Friday, March 8 at 7:30 p.m. local time (&;30 a.m. ET) in front of a sold out and boisterous crowd.

“This is what we came for. We are excited and hopefully the first of two games against Russia, stated Colarossi. “Hopefully everyone is healthy and ready to go plus we can start to execute some of the things we have been working on and building on.”

Harper explained after the game about the beginning and his scoring prowess in the win, “This wasn’t the start we wanted but we regrouped and faced so some adversity and battled through it. Scoring the two goals was a big relief and big weigh lifted off my shoulders and hope I can keep on scoring.”

The Swiss actually scored first and held a 2-1 lead after 20 minutes. In the second, Canada dominated by scoring all three goals by Christophe Boivin (UQTR; Quebec City, Que.), Harper and Aidan Wallace (Toronto; Toronto, Ont.) with the tallies. This is the third straight game where the Canadians have out-scored the opposition in the middle frame (game one was a 4:1 margin; game two was 7:0 advantage; game three: 3:0) 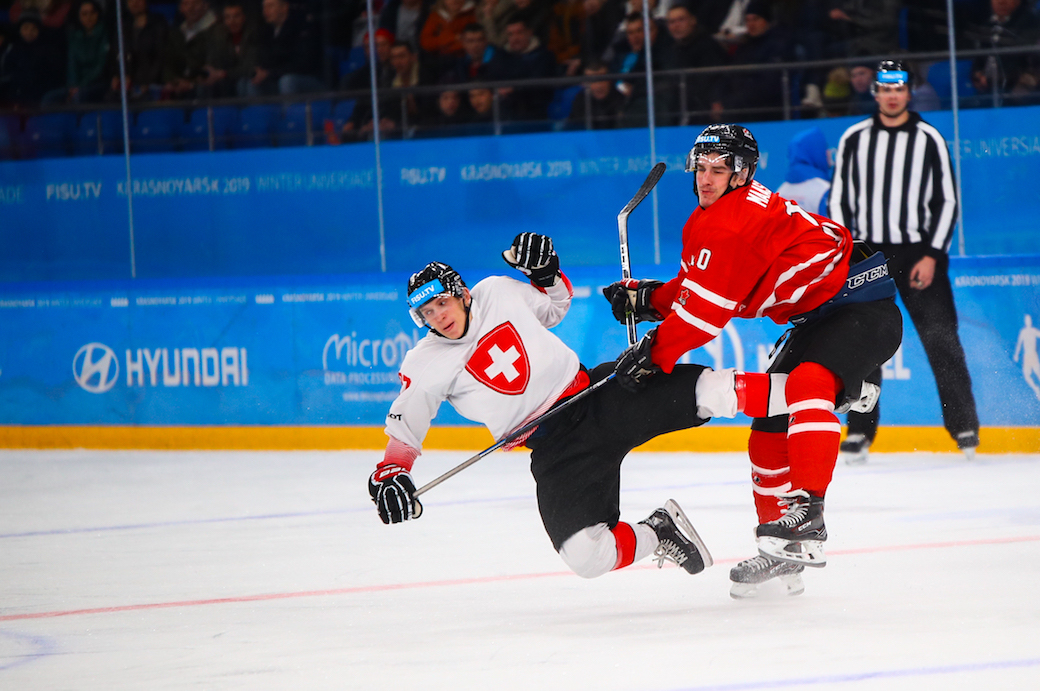 Goaltender Sébastien Auger (UQTR; St-Augustin-de-Desmaures, Que.) earned the win with a 14 save performance as Canada outshot the Swiss by a 43-16 margin.

Harper finished by looking ahead to the next game. “We have to be ready for Sweden as they are a good team. We just need to be prepared and play our Canadian way.”