It was not the result they wanted.

In a spirited affair, the Canadians started slow but found their momentum in the second to battle back and take control of some of the match until the Russians scored on the power play. 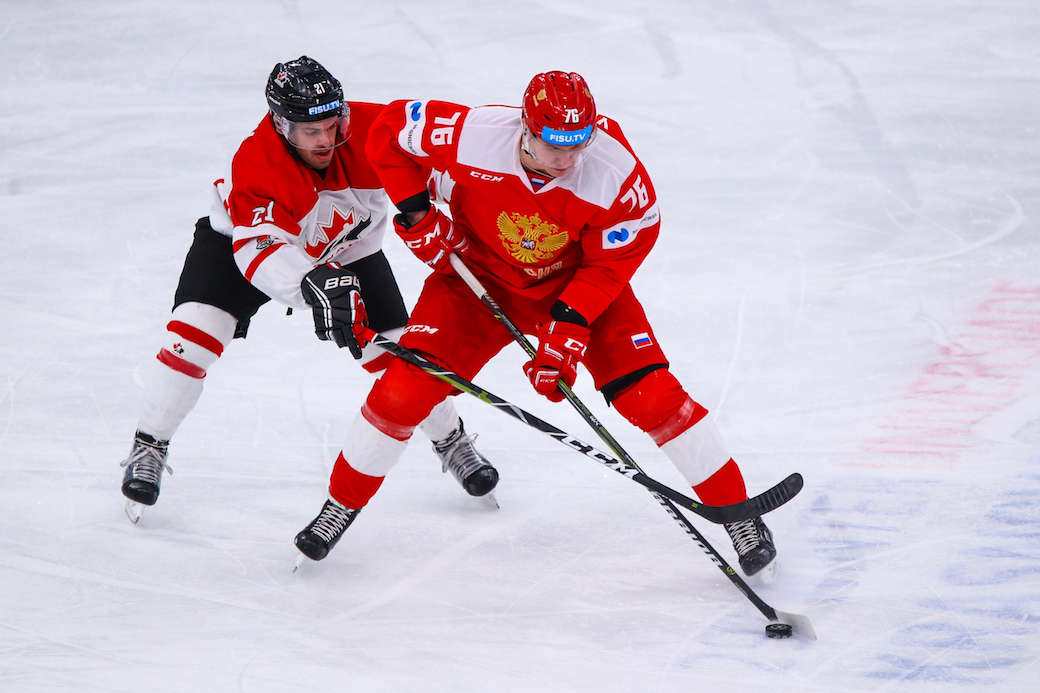 Canada head coach Kevin Hamlin said, “I think it was a good hockey exception for the penalties. It’s tough to play against a team like that and to be in the penalty box. We paid the price tonight.”

Assistant captain and forward Mathieu Lemay (UQTR; Hawksbury, Ont.) concurred, “We came back strong but had too many penalties. At the end, when they are always on the power play, it is tough to kill them all.”

In the first, a loud and boisterous crowd fueled Russia as they jumped to a 1-0 lead in just after the ten minute mark. For the maple leaf squad it looked like they would get out of the first only down one after some solid and sometimes unreal saves by goaltender Sébastien Auger (UQTR; St-Augustin-de-Desmaures, Que.). 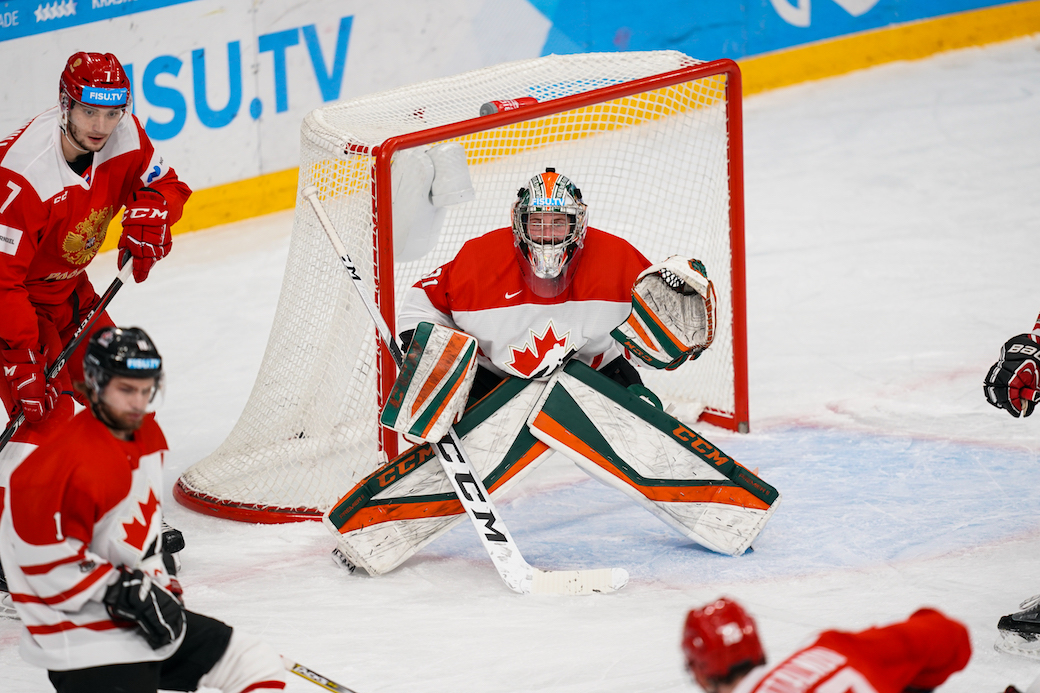 Auger robbed Russian forward Bogdan Yakimov on a semi-breakaway and as the puck popped up and was headed into the net, he swatted it away with Auger’s blocker to put the puck on the top of the net. But alas, Canada surrendered a late 2-on-1 and the host side potted a goal with 0.0 left on the clock. After video review, Russia went into the dressing room with 2-0 lead after outshooting Canada 16-4.

In the second, Russia scored again early with a quick shot in the slot and no chance for Auger and now 3-0. After that, Canada finally started to mountain an offensive attack and sustain momentum s they drew a couple of penalties.

Just after a penalty expired, Lemay found a loose puck off a blocked shot from forward Nick Chyzowski (Waterloo; Kamloops, B.C.) and roofed home the first marker of the contest for the red and white. Canada had a four penalty to end the period and had a couple chances from Lemay and then it was nullified with a late hit call on Canada and after two, Russia 3-1. 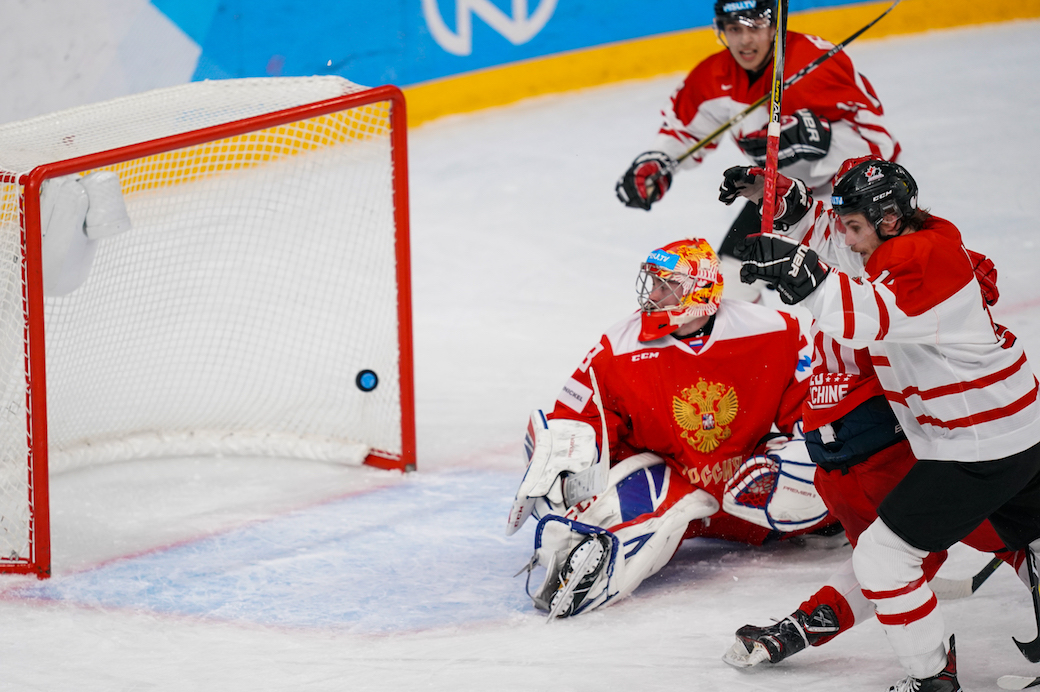 In the final frame, Canada continued their momentum as Lemay and then assistant captain and forward Stephen Harper (Acadia; Burlington, Ont.) fired just wide as the Canucks the pressed the host. Unfortunately, Canada did not find the back of the net and then a back breaker of a goal as Russia scored from the short side down low shot on the goal line that found its way top shelf on Auger for a 4-1 lead.

The Canadians kept coming but another penalty was costly as Auger could not pick up a Seeing Eye point shot through a double screen for the last goal of the game. 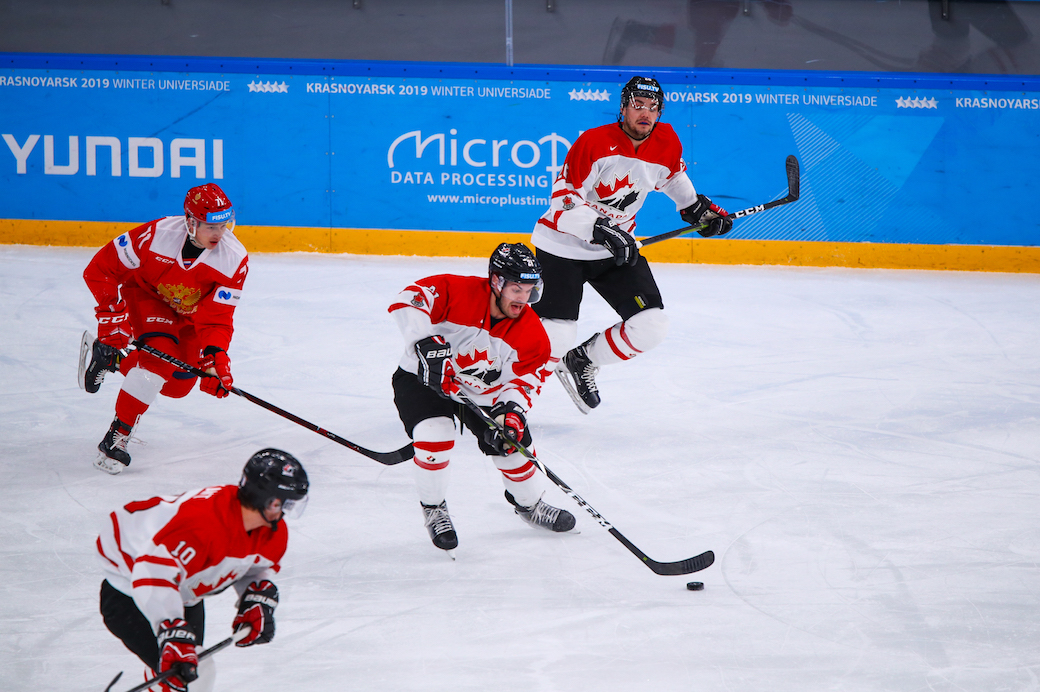 Now Canada has a rematch with Kazakhstan as they met earlier in the round robin and lost 4-3.

“We’ve come a long way. We’ve worked awfully hard in a short period of time. It would be a shame to leave empty handed. We have to flip the script a little, regroup and have a short turnaround time to get it done for tomorrow,” Hamlin stated.