The Canadian women’s hockey team won the fourth medal for Team Canada at the 29th Winter Universiade after capturing a silver medal in a close 2-0 result for host Russia in the gold medal game. At these Games, Canada has won a gold medal in men’s snowboard cross by Will Malisch (Western; Markam, Ont.) and Audrey McManiman (Laval; Saint-Ambroise-de-Kildare, Que.) with a bronze medal in women’s snowboard cross, both on day one of competition along a silver medal performance from men’s curling along with the silver now by the women’s hockey team.

Canada wins silver against Russia for the third consecutive Universiade (3-0 score in Granada, Spain in 2015; 4-1 result in Almaty, Kazakhstan). The U SPORTS all-stars had also previously won gold at each of the first three FISU tournaments in 2009 (Harbin, China), 2011 (Erzurum, Turkey) and 2013 (Trentino, Italy) and now have been in seven straight Universade women’s hockey finals since it was introduced as a medal sport in 2009.

What a nail biter of a game. 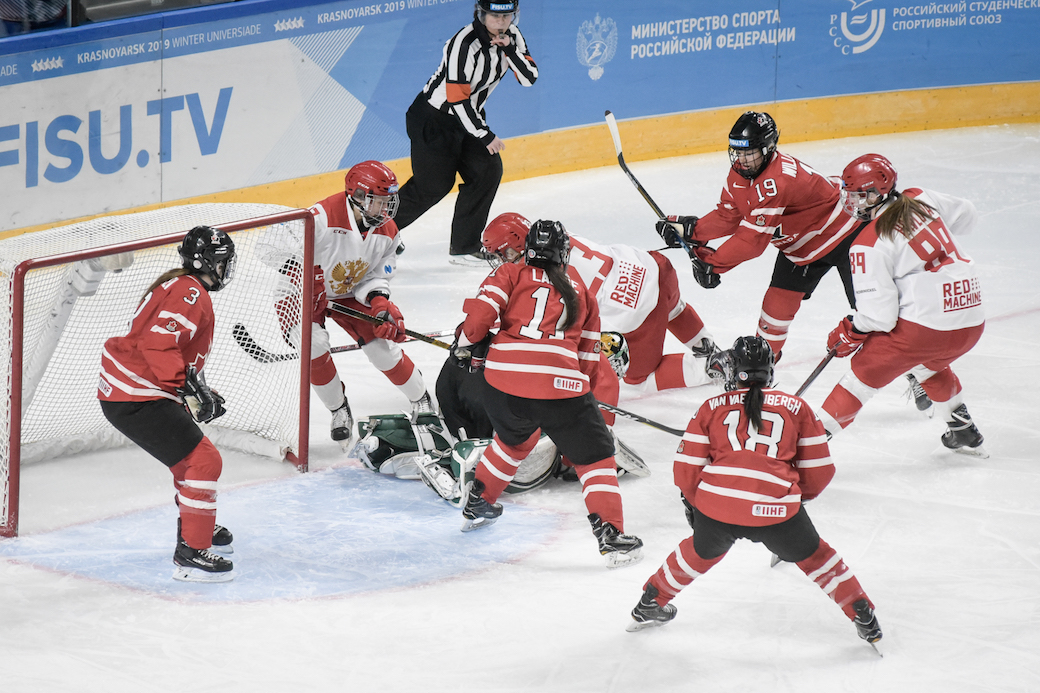 The Canadian women’s hockey team (4-1; playoffs: 1-1) played stride for stride with host Russia (5-0; playoffs: 2-0) but could not find the back of the net in a contest that was 0-0 until almost halfway through the third with an empty-netter at the end.

Captain Kaitlin Willoughby (Saskatchewan; Prince Albert, Sask.) reflected, “Definitely this was the not the colour of medal we wanted. Talking in the room with the girls, I couldn’t be more proud of how hard we worked and the experiences we had together – that’s something we will never forget and really proud of the whole team. 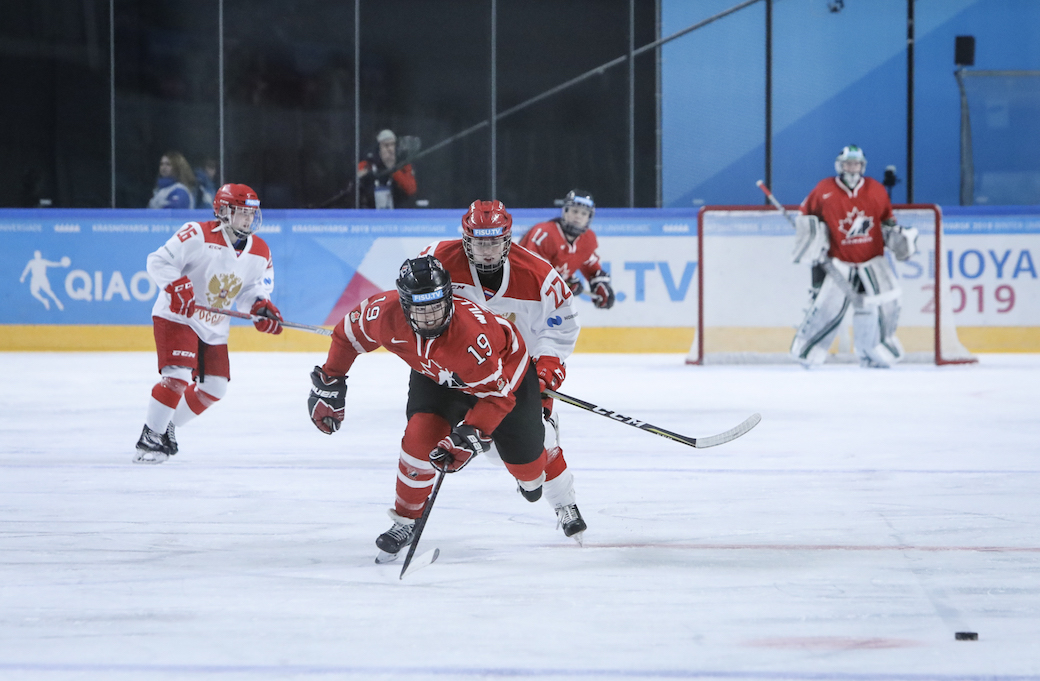 Russia outshot Canada 42-34 and netminder Jessica Vance (Saskatchewan; Prince Albert, Sask.) stood on her head with several tough, close-in stops throughout the game She stated, ”this was an unreal experience as most of us being here at a Universiade for the first time has been pretty cool. We were right in that game and it was disappointing to lose but I think we know that I think we deserved better.”

At the sold-out Arena Sever, the pro-Russian crowd created an electric atmosphere as these teams went back and forth with good scoring chances throughout and had both goalies making tough stops.

In the first, Vance was tasked to make stop after stop as the Russians were looking to pounce early as they did in the round robin game when they won 4-2. Instead it was 0-0 with Russia having a 20-11 advantage on shots in goal. 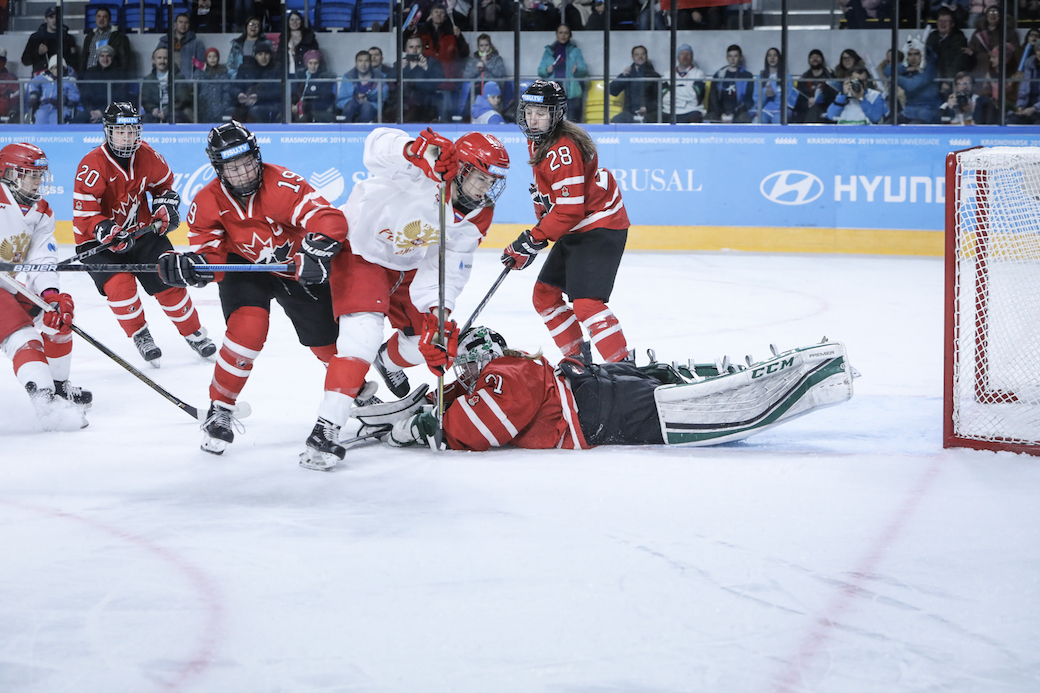 Canada produced their best period of the tournament in the second as the ice tilted as waves of Canadian rushes almost produced the first goal. After killing off an early penalty, forward Katryne Villeneuve (Moncton; Casselman, Ont.) was denied in the slot and stopped on a backhand while when the red and white had a late power play, they tried to jam the puck under the Russian goalie in a goal mouth scramble. A glorious opportunity presented itself at the end of the period. Forward Tricia Van Vaerenbergh (Lethbridge: Picture Butte, Alta.) stripped a defender at the blueline and walked in all alone but couldn’t bury the shot with only 17 second left in the period. After two, still 0-0 but Canada outshot Russia by a 17-7 margin in the middle frame.

The third period was tense. It seemed the first goal might be the game-winner as both teams continued to push. Vance again was big on stopping numerous chances from the slot and her best might have been a sliding point blank save on a cross-ice pass that produced a one-timer. 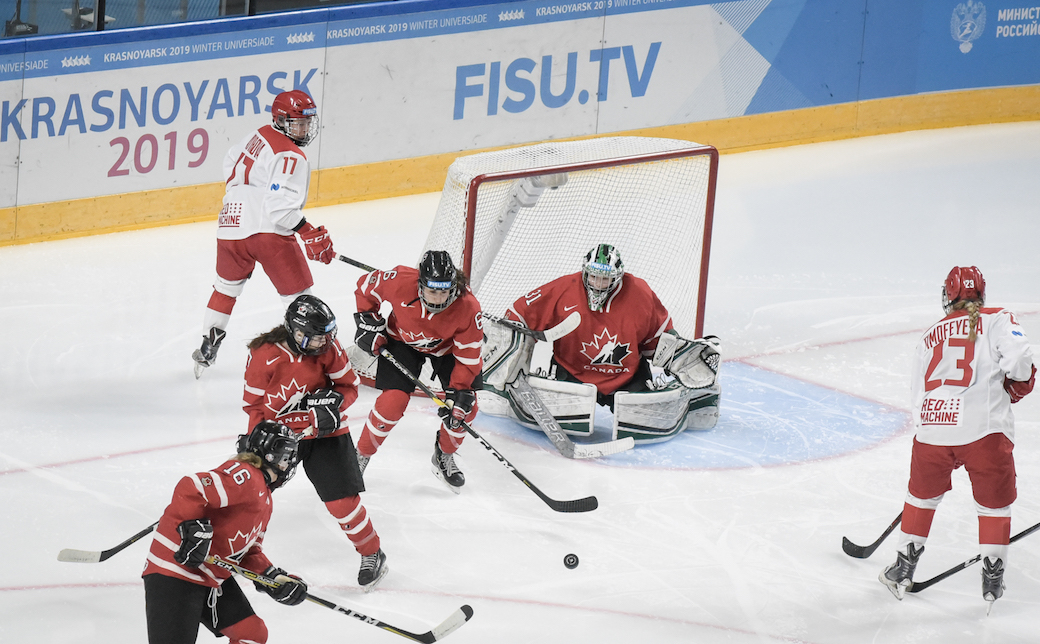 A crucial call of delay of game penalty for shooting the puck out of the rink in the defensive zone resulted in the first goal. Canada was just over 30 seconds away from killing the infraction when Russia scored from the point on a screen shot that Vance could not save this time.

For the rest of the period, the Canadians were desperate for an equalizer but to no avail. The last good opportunity fluttered by on a 2-on-1 with about four minutes left as the Russians locked down the neutral zone and slated away the victory with an empty netter and their third consecutive gold in women’s hockey at the Winter Universiade. 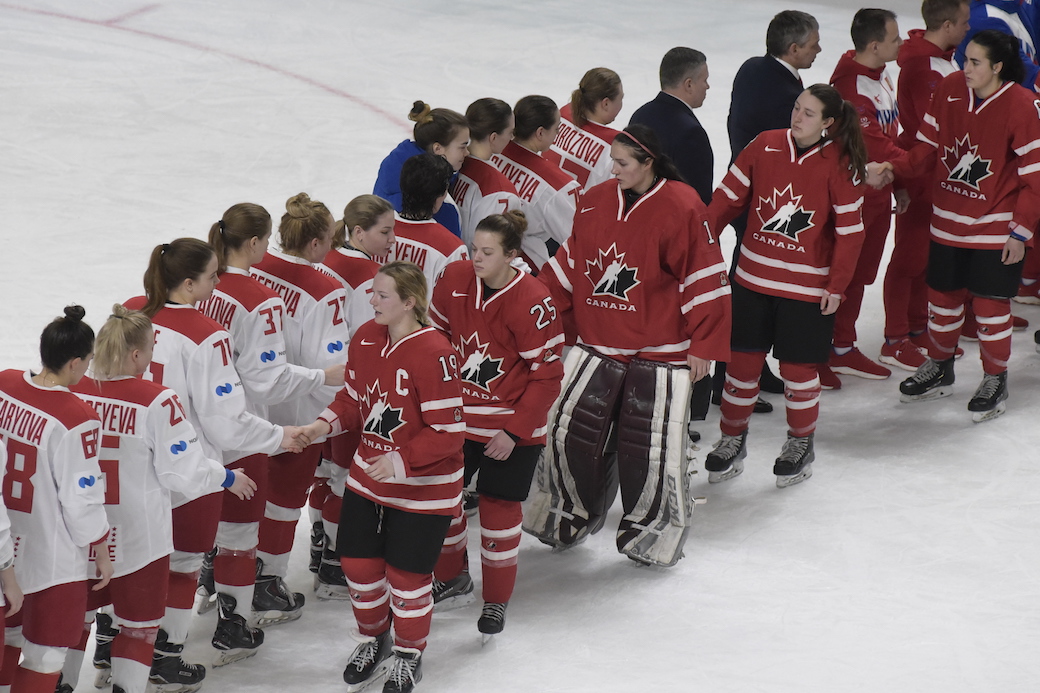 Head coach Stacey Colarossi (Laurentian) summed up the game, “We made some modifications from the last game and the girls executed. They really played a great game and it was back and forth hockey. Definitely, couldn’t ask any more of them. It was going to be a dirty goal and that’s what happened. We outplayed them in the second period and pushed them really good. I think we had them back on their heels and all we needed was one little bounce.” 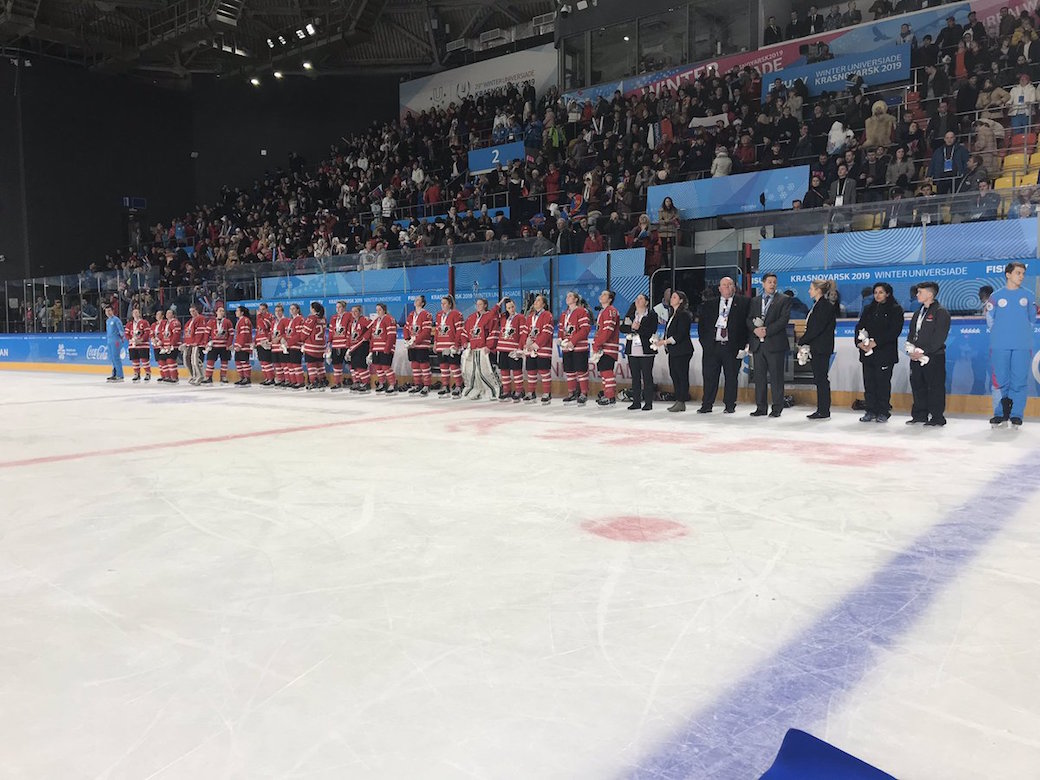 The coach added, “It has been an incredible journey. Exactly where we wanted to end up being in this game today and not the outcome we wanted. But wouldn’t want to spend it with anybody else.”

It was hard for Willoughby and Vance to take the result but they understood the importance of these Games at Russia. “The atmosphere we knew what it would be today as most fans would be against but it made the game more exciting. It was a really fun game to play to be honest just not the result that we wanted.” said Willoughby 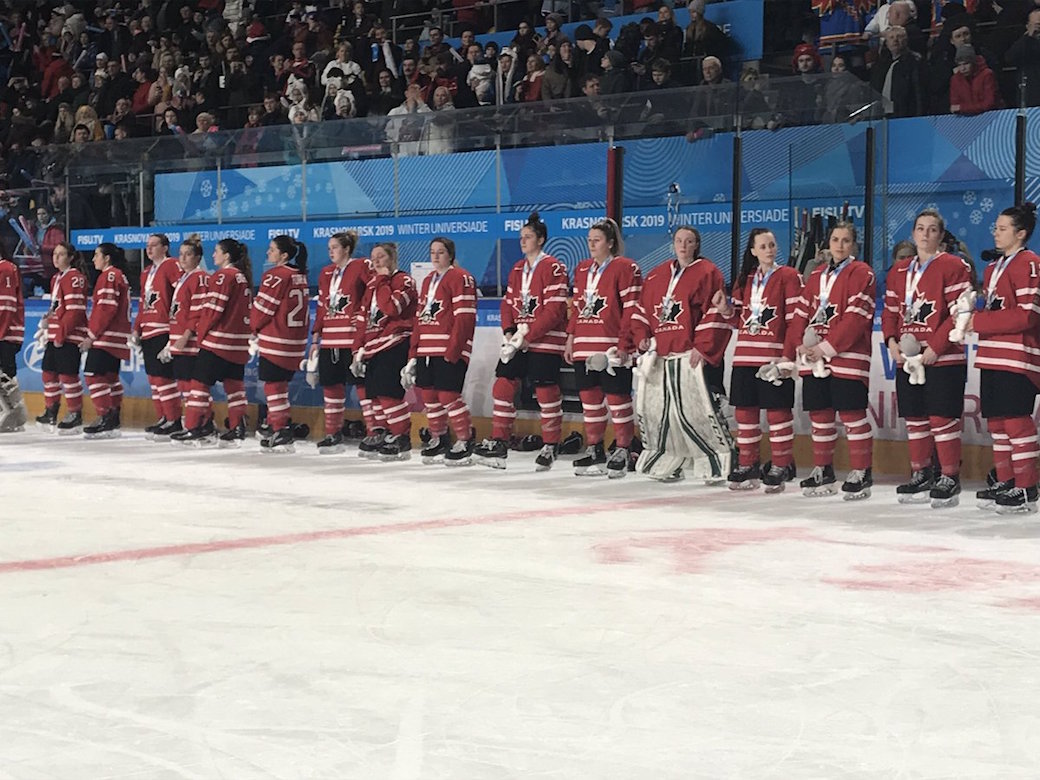 Vance added, “I think as a kid you always dream of playing in front of a crowd this big. It was pretty cool to see that and we did what we could – and just came up short.” 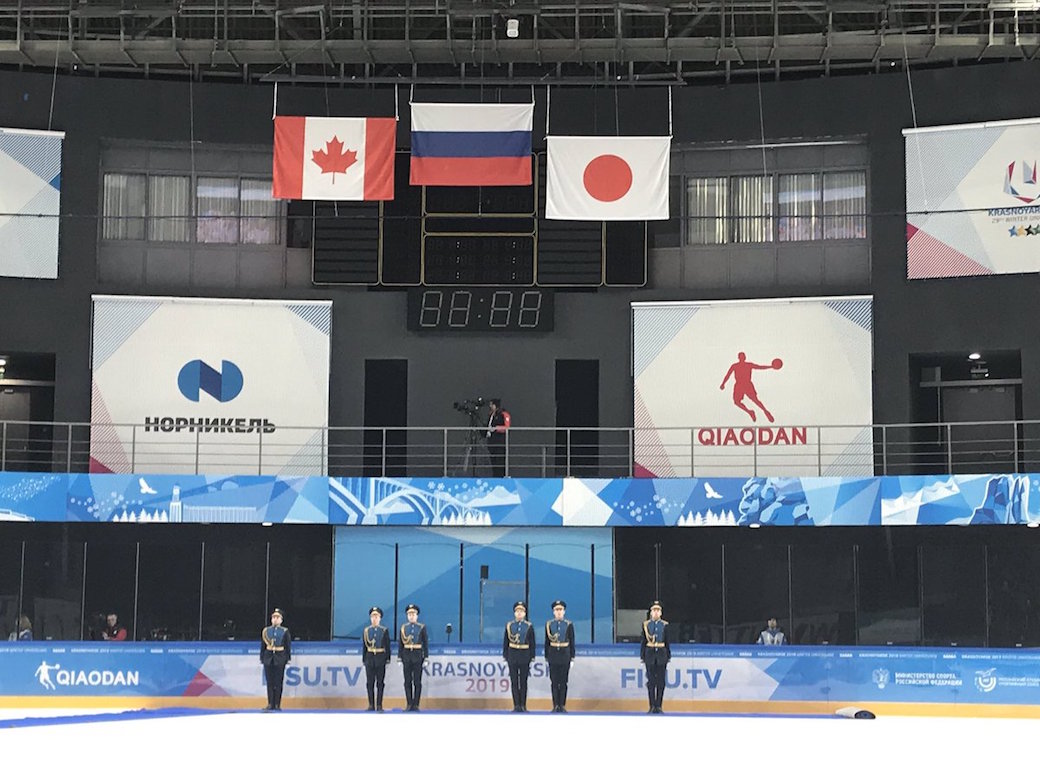