The Canadian women’s water polo team nearly tripled up their opponent with a 23-8 win over the Czech Republic Sunday, highlighting Day 4 of the 30th Summer Universiade in Naples and surrounding area.

Team Canada moves to 3-0 ahead of a big matchup with Hungary on Monday in the final preliminary game of the tournament. Elsewhere Sunday, Canada came tantalizingly close to the podium with fourth-place finishes at both diving and swimming, while the artistic gymnastics competition wrapped up at PalaVesuvio.

At Casoria, Valeria Rojas was the left-handed ace that led Canada to a 23-8 victory over the Czech Republic on Sunday. Rojas scored five goals for Canada, which will next face Hungary for a battle for top spot in Pool A.

In addition to Rojas’ five goals, Peggy Jean Allin and Brianna Utas scored three goals each, while six other Canadians each scored two.

“We wanted to come out with a strong start and I think we just needed to get pace and get our game going,” said Rojas, whose had a slow start to the game. “The back and forth (first half) showed us that this wasn’t going to be an easy game so we need to get our tempo up and work as a team to get it going and get the goals up.”

At Naples, the fourth day of swimming competition wrapped up with Canada picking up a trio of top-five finishes.

In the final event of the night, the Canadian team of Ainsley McMurray, Marit Anderson, Kennedy Goss, and Sarah Watson swam a time of 8:07.42 in the women’s 4 x 200-metre freestyle relay, picking up a fifth-place finish. Goss made a big move on the third leg, bringing the Canadians all the way from seventh into fourth position, and Watson was just out-touched at the wall by Japan to finish fifth. It was a raucous environment at Piscina Scandone, with the host Italians capturing the silver medal to the delight of the packed house.

“Kennedy gave me some clear water which was great for the start,” said Watson. “It is hard in an environment like this to not let the excitement get to you, but I definitely tried to maintain myself and bring it home the last 100.”

It was the second event of the night for both Goss and Watson. In the women’s 100-metre backstroke final, Goss and Ingrid Wilm just missed the podium. Wilm finished fourth in 1:00.77, 34 hundredths off the bronze-medal time, while Goss finished a tenth behind her for fifth place.

In the women’s 100-metre butterfly, Hannah Genich from the University of Toronto qualified for Monday’s final, finishing fourth in her semifinal in a time of 59.59. Watson was also a semifinalist in the event but finished seventh in her heat and did not advance.

In the women’s 200-metre breaststroke semifinal, Miranda Stever touched the wall in 2:29.43 and Sophie Angus finished in 2:31.60, but neither advanced to Monday’s final.

At Naples, the team of Olivia Chamandy and Mia Vallée finished just a sliver off the podium, taking fourth place in the women’s 3 m springboard synchro event.

Canada has another medal chance coming up Monday, however, after Laurent Gosselin-Paradis and Ethan Pitman finished fourth and seventh, respectively, in qualifying for the men’s platform. The semifinal in that event is set for 4 a.m. EDT / 1 a.m. PDT (10 a.m. local) Monday, with the final to follow immediately. And the last event of the Naples 2019 diving competition is set for 8:15 a.m. EDT / 5:15 a.m. PDT (2:15 p.m. local) Monday, as Pitman will join forces with Elaena Dick in the mixed team event. FISU.tv will have live coverage of all the action Monday. 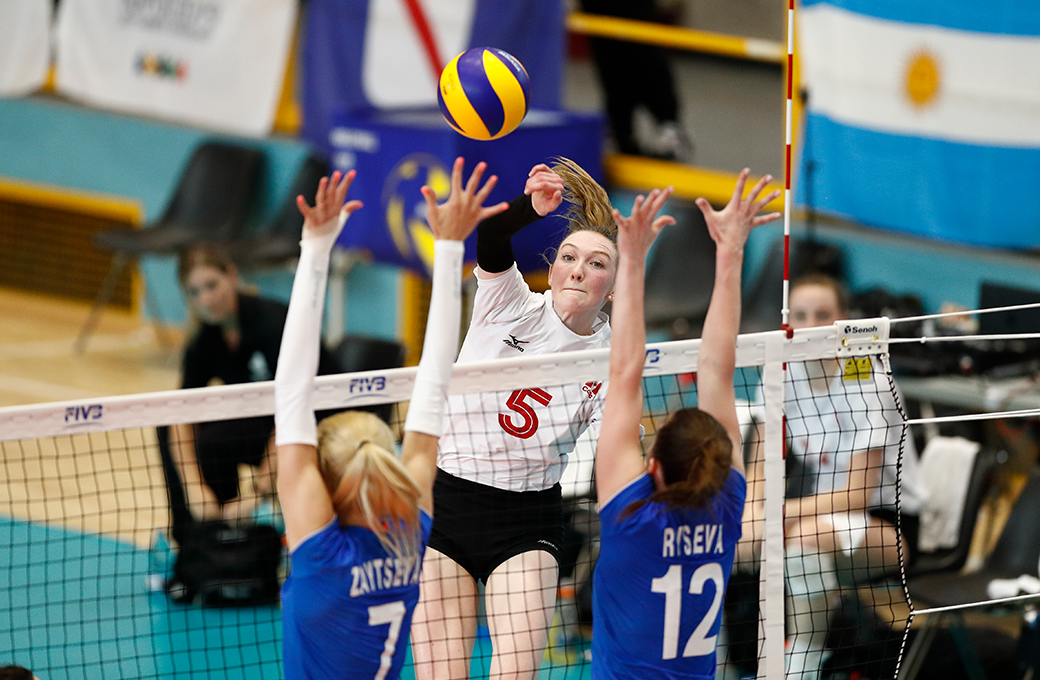 Canada, which opened the tournament with straight sets victories over Mexico and Thailand, wraps up pool play with a 2-1 record and heads into the quarter-final round as the second seed in Group A.

“Once we adjusted to the angles they were hitting and force they were hitting with I think we adapted to their style pretty well,” said Canadian bench boss Laurie Eisler. “You can’t really prepare for that off of video. You have to play it so the first set was rough. I’m really happy with how our team responded and battled. Obviously it wasn’t enough today, but it’s really great preparation for us going into the next match.”

They will take on Hungary (3-0), who finished atop Group C with wins over Taipei, Czech Republic and Argentina, on Tuesday at 2 p.m. EDT / 11 a.m. PDT (8 p.m. local) at Palacoscioni in Nocera.

Craig Ireland and Pierce Johnson were the most productive in attack with nine kills each. Johnathan Moate had four blocks.

“We did better for sure,” said Team Canada’s captain George Hobern without hesitation. “One major thing that we struggled with yesterday was serving and I thought today we definitely improved on that, so it’s a step in the right direction for our team. We got caught not penetrating enough on our blocks and a lot of balls were coming down on our side. But overall, I thought we played a pretty solid match.

At Cercola, women’s basketball were one possession shy of a spot in the consolation semifinal after losing 54-53 to Slovakia.

Sarah-Jane Marois led her side in scoring with 13 points in a game that saw both teams struggle from the field, shooting just 30 per cent. Slovakia won the rebounding battle 48-24 and their explosive third quarter secured the game, despite a valiant fourth-quarter of scoring from Canada.

At Naples, Jessica Dowling and Jacob Bonnay wrapped up the artistic gymnastics competition with individual finals.

Jacob Bonnay, who attends the University of Nebraska–Lincoln, finished eighth overall in the men’s pommel horse with a score of 12.900 points.

At Casoria, Ethan Lippman and Holly Cheuk opened the taekwondo competition by each advancing through the men’s and women’s poomsae preliminaries and placing 13th overall.

A psychology major at Simon Fraser University, Cheuk accumulated a score of 102.5, while Lippman, a business student at the University of Southern California, recorded an overall score of 101.7.

At Baronissi, Tamara Booy, Kirsten Van Marion and Evelyn Zheng finished 17th overall in the women’s team épée relay, falling to Japan 45-36 in the round of 32.