It was an action-packed Day 2 for Team Canada in Italy as men’s basketball and women’s water polo both improved to 2-0 in preliminary play, men’s and women’s rugby 7’s and women’s volleyball opened competition, women’s basketball wrapped up round robin action, and swimming, artistic gymnastics, fencing and table tennis all donned the Red and White.

Sitting in fifth place before the last round, Gosselin-Paradis and Pitman managed to score enough points on their last attempt to leapfrog Russia and South Korea to claim the bronze medal.

“We did well," said Gosselin-Paradis. "We made some mistakes, but overall it was pretty consistent. It was one of our goals to get on the podium, so it's really exciting. We are happy to have won Canada's first medal." 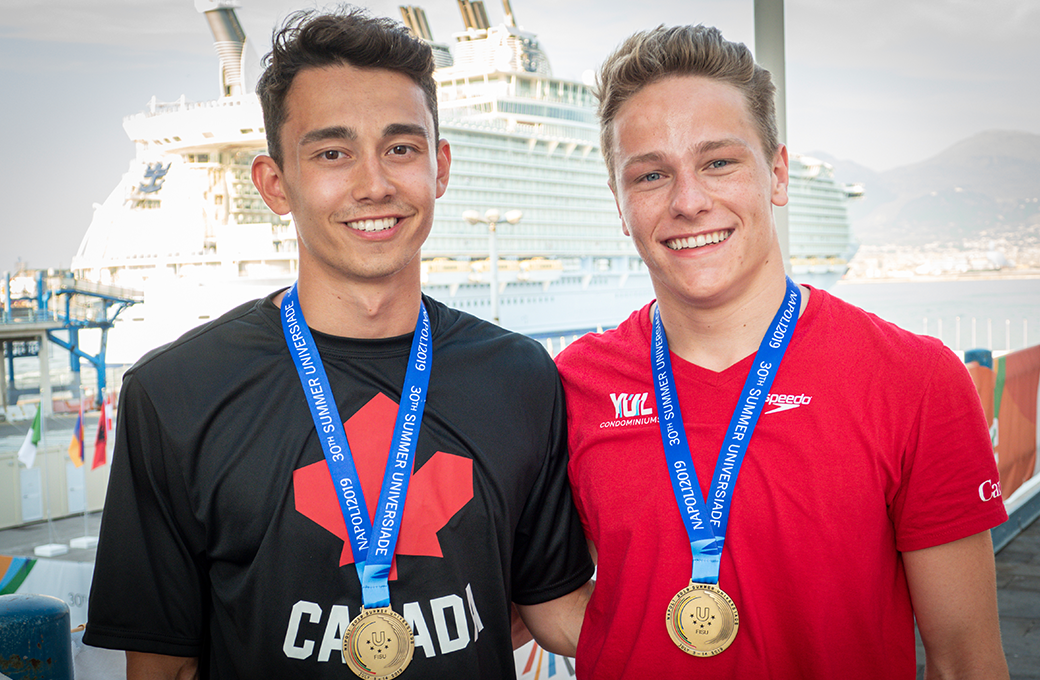 Earlier in the day, Mia Vallée and Olivia Chamandy both earned their ticket for the women's 3m springboard semifinal. Vallée placed sixth in the preliminaries, while her teammate Chamandy finished 19th, but took advantage of the fact that both Russia and the USA had three qualified divers to sneak into the next round. A maximum of two divers per country are allowed in the semis.

At Aversa, the Canadian men’s basketball team exploded for 53 second-half points to defeat Germany 80-61 Friday night to improve to 2-0 at the 2019 Summer Universiade.

Canada struggled offensively in the opening half against a lengthy German squad averaging 6-foot-8, managing just 27 points in the first half. But their defence kept them in it through 20 minutes, and a 33-27 German lead at the half quickly evaporated in the third quarter.

“It gtakes time to get used to playing against that size, and our guys reacted well,” said Canadian head coach Shawn Swords. “But our defence helped us – it took a while for the offence to get going, but our defence was steady throughout the game, and our pace was good for 40 minutes.”

All three sets started as close battles before Canada found its groove and pulled away.

“I like the composure of our team,” said Canadian head coach Laurie Eisler. “We started pretty tight and made a lot of unforced errors in the beginning but we settled into a routine and found ourselves. Overall it was a pretty good performance.”

Kelsey Veltman spread her name across the stats sheet with six kills, three aces and three blocks. She and Caroline Livingstone led all players with 12 points apiece.

“We played unreal,” said Veltman, who recently signed a pro contract will Volley Millenium Brescia in Italy for the 2019-20 season. “You can really tell that our practice is coming out on the court. This game just proved how well we’ve been working together and I think we really came together today for sure.”

At Naples, Jessica Dowling led Canada to a fourth-place finish in the women’s team competition, while also qualifying for three individual events on Day 2 of competition.

Dowling, Alana Fischer and Denelle Pedrick combined for an overall score of 97.700 points, just 5.8 points behind the host and third-place Italians. 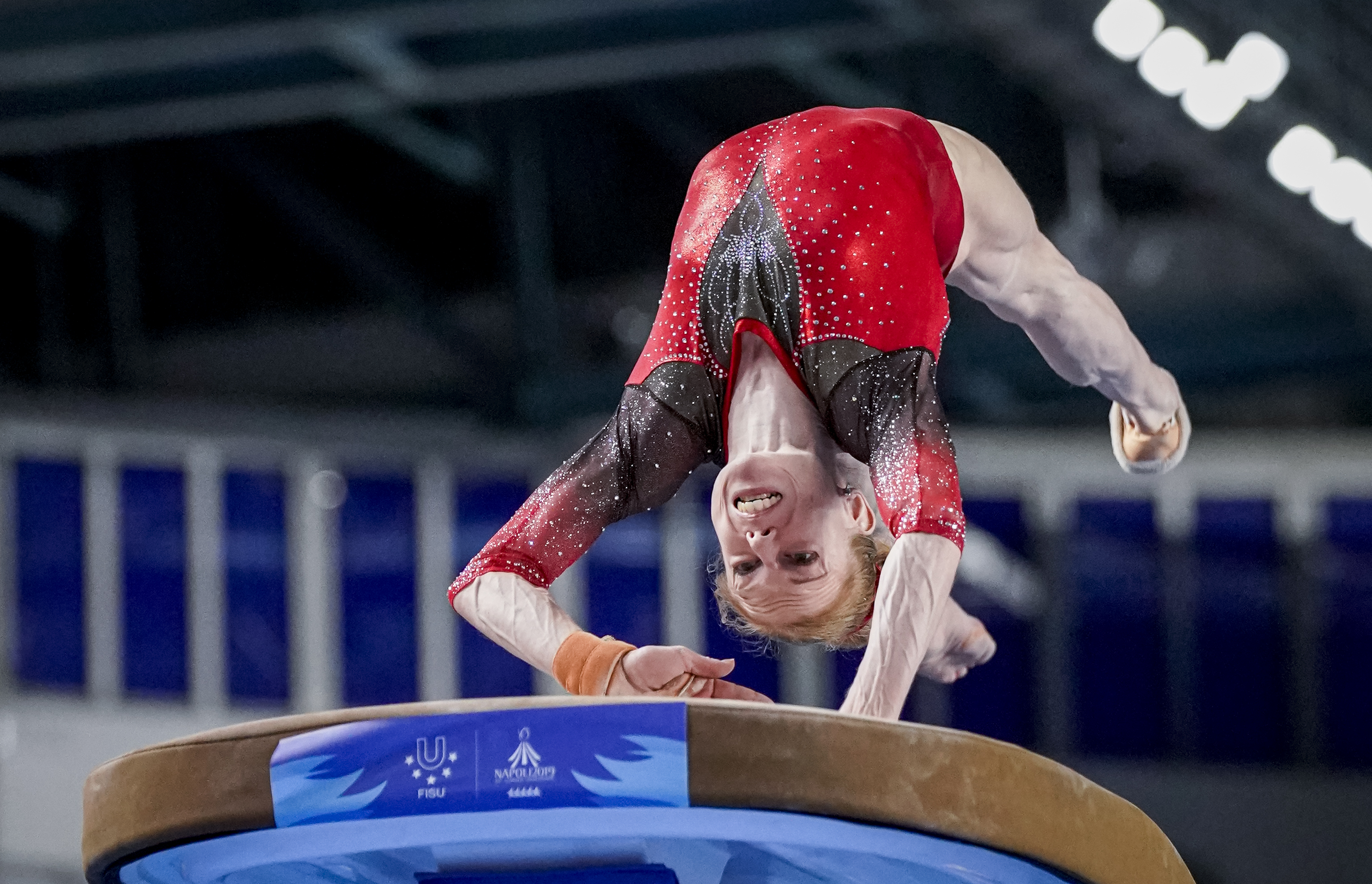 In Casoria, goalie Kelsey Jensen’s performance propelled Canada’s water polo team to its second victory, 8-1 over France, in Pool A play at the 2019 Summer Universiade on Friday.

A second victory leaves Canada in good position to move in to the top three in their pool and avoid an extra cross-over game. Jensen finished the game with 13 saves, while seven different scorers got on the sheet, with Myriam Lizotte notching two for Canada.

“Kelsey stepped up and played very well today,” said Canadian head coach Cyril Dorgigné, noting the depth in Jensen and Toronto goalie Rachel Jaffe. “We are very lucky because Rachel played well in the first game and then Kelsey came in and had a very high level as well. It’s comforting to know that if at some point one goalie is playing a little lower the other one can step in easily.”

At Naples, Canada's women rugby sevens team got off to a good start with a 14-12 victory over the host Italian team in Naples on Friday, while the men’s team dropped both of its opening-day contests against France and Japan.

The Canadian women started the match in a hurry, scoring two converted tries in the first five minutes of play to take a 14-0 lead at the half. Raised by an enthusiastic crowd, the Italians managed to come back in the second half, but finally ran out of time, allowing Canada to claim a first win in Group A.

“Italy was a pretty organized squad, so we knew that we wanted to get up early”, said Canada’s head coach Collette McCauley. “We made a few decisions that we can talk about as a team to make us more efficient, control the game a little bit more and manage our possession better.

“This team has been working really hard for the past two days, but this was the first time that they collectively played together. I think we did a great job supporting each other.”

On the men's side, Canada had a tough start with two defeats of 35-5 against France and 44-5 against Japan in Group B action.

“With the experience I’ve had, I’m just realistic on the results”, said Canada’s bench boss Robin MacDowell. “They are young men. For nine of them, it’s the first time representing Canada and we only had two training sessions so collectively, we’ve had about three hours together on the field.”

Ainsley McMurray touched the wall in 55.93 seconds in the women's 100 m freestyle semifinal. The University of Toronto student is ranked seventh heading into Saturday night’s final.

“We have a fantastic buy-in from this group,” said Canada’s team leader Ken McKinnon. “Thirty two swimmers came to the meet and they have been nothing but a joy to work with for the first few days. Our whole theme is on self improvement, moving up in the rankings and seeing what you can do to set the summer up for a good finish at our summer national championships.”

In Naples, a second half spoiler took away what was a solid start to the game as Canada fell 82-59 to Finland in their third contest of the 2019 Summer Universiade at Pala Barbuto.

Finland’s Sara Bejedi was outstanding through the second half to erase any hopes of Canada earning a preliminary win in this tournament. Canada gave up 48 points in that second half to be forced to move on from pool-play without a victory.

For Canada, Laval’s Marois had 12 points and McMaster’s Harper had 10. The Canadians were held to 36 per cent from the field, relative to Finland’s 40.

At Baronissi, Karina Li of the University of Toronto and Norman Riley of Athabasca University notched Canada’s top results of the day, finishing 45th overall in the women’s foil and men’s épée events, respectively.

The individual competition wraps up Saturday with the men’s foil and women’s sabre events, before the team relays commence on Sunday.

At Monterusciello, Canada’s women’s team (0-3) dropped a narrow 3-2 decision to Mongolia. Justina Yeung won her match 3-0, while Alayna Chan came out on top 3-1.