Nine months ago, Kristian D’Amore was wrapping up a four-year career as a goalkeeper with the University of New Brunswick Reds men’s soccer team. Today, he is overseeing over 1,200 officials at the 2019 FISU Summer Universiade in Naples, Italy.

As the Universiade’s manager of ITO/NTO services, D’Amore leads the department that is responsible for the travel, accommodations, food & beverage, VISA securement, per-diem and reimbursement, uniforms and accreditation of all national and international officials at the major international games.

The Universiade is a multi-sport event, which sees university students from all over the world compete. For relevance and number of participants, the Summer Universiade is just second to the Olympic Games, and it occurs every two years in a different city.

So how did a Mississauga, Ont., native of Italian-Canadian descent come to work for FISU – the International University Sports Federation?

“Soccer and sport has been a passion of mine since as long as I could remember,” says D’Amore. “I played competitive soccer growing up and knew from a young age that sport and event management was what I wanted to do with my life beyond my university years.”

That brought D’Amore to UNB, where he graduated in April with a Bachelor of Recreation and Sports Studies – Management.

“I was determined to find a sport management program at a good school that also allowed me to compete as a varsity student-athlete. After a couple of years looking into the NCAA system, I fell in love with the UNB, Fredericton, and the East Coast. The head coach, Miles Pinsent, urged me to take a risk on something new and at the snap of the finger, I had committed to UNB.”

A four-time Academic All-Canadian, D’Amore and the Reds earned U SPORTS national championship berths in three of his four seasons, winning the silver medal in 2015.

“It was an honour to rep the UNB Reds across my chest for some of the best years of my life,” he says.

Off the pitch, D’Amore worked in the UNB Athletics marketing and communications department for four years. During that time, he helped with the hosting of two U SPORTS men’s hockey and one national women’s basketball championship.

“While working for athletics, I focused my energy in connecting with our students – brand development, fan engagement, and building more pride in the university. Nick Zildjan and I steered the recent re-brand of UNB Athletics - a new look and name, uniting the university, students, and bringing our identity to the 21st century.” 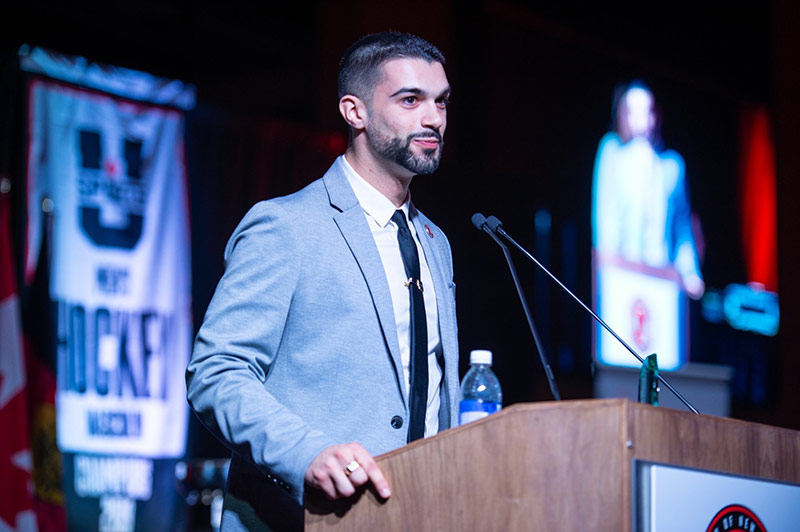 D’Amore, who also volunteered at the 2015 Pan Am Games and the 2017 North American Indigenous Games – both held in Toronto – first worked for FISU at the 2018 World University Beach Volleyball Championship in Munich last summer, where Canada’s Megan and Nicole McNamara won the gold medal.

“Dr. Burk and I stayed in touch after the Games, exchanging a few emails. She told me she would pass my name along to help get me a job in Naples. Though hopeful, I was never really sure it was going to happen.”

After not hearing back about the job in Naples, D’Amore accepted a position with as a business consultant with the Hamilton Honey Badgers in the new Canadian Elite Basketball League (CEBL).

However, just one month later, the phone rang.

“One random morning, I received a phone call from FISU Summer Universiade Director Marc Vandenplas, saying that Naples needs some help and that Dr. Burk spoke very highly of me. He asked me to take the first flight from Toronto to Naples and get started right away. So I did.”

D’Amore is thriving in his role and credits his team for a well-run Games thus far.

“It's been an incredible experience. I have a very challenging and demanding client group, given that many of our technical officials have been to Olympics and world championships and expect an especially high level of service.”

So what’s next for the former U SPORTS keeper?

“I’m not sure. I’m definitely going to take some time to travel Europe and recover after the Games. Who knows – maybe Tokyo 2020 or the next Universiade! I'm a Games junkie now!”