In 2009 when the Stittsville, Ont., native claimed U SPORTS gold in the 72kg weight class, an Olympic title was still a dream. Taking the national title as a member of the Calgary Dinos after making the move from Stittsville to her new home would prove to be an instrumental factor in Wiebe’s climb to the top of the women’s wrestling world. With her first gold medal, her uniform read “Calgary.” In her most recent, it read “Canada.”

At the 2016 Rio Olympics, Wiebe became the third Canadian to win Olympic gold in wrestling. The journey to success would begin with her cross-country move to train in one of the most successful programs in U SPORTS wrestling. The 27-year-old quickly climbed the ranks of the Canadian university wrestling system, affording her the opportunity to volunteer and train with the Canadian Olympic squad. Ultimately, her drive to make the move to train in one of Canada’s top wrestling program opened major international opportunities.

“I moved across the country to be at the University of Calgary,” Wiebe explains. “I would not be where I am today were it not for the coaches, Dinos administration, and teammates who supported me.”

This coaching staff includes head coach Mitch Ostberg as well as assistant Paul Ragusa, who also serves as Wiebe’s personal coach. Both have been instrumental in the progression of Wiebe’s career, and remain vital as heads of the Calgary Dinos wrestling program. The pair also remain key components of Wiebe’s training and competition, as she continues to work daily in the University of Calgary wrestling room.

Beyond the opportunity to continue training with her familiar coaches and alongside fellow Olympians in Ragusa, Leah Callahan, and fellow gold medalist Carol Huynh, who are also part of the Dinos coaching staff - the current roster of Calgary wrestlers reap the benefits of training with this level of mentorship.

“Having inspirational sports figures right in the training area with developing athletes gives them a clear vision that those athletes came through the same system they’re in,” says Ostberg. “I think they train harder, and work better because of the presence of athletes like Erica and (former Dinos wrestler and Rio Olympian) Jasmine (Mian), and other athletes we’ve had… All those people make it clear that U SPORTS is a path to high performance.” 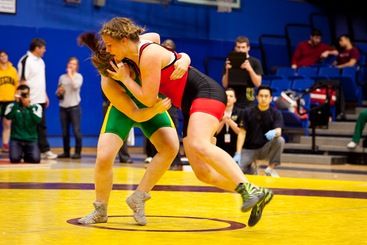 Wiebe is familiar with the draw of Olympic experience to the Calgary Dinos wrestling program, as it was one of the major factors in her own learning experience at the University of Calgary.

“I was inspired by my teammate Carol Huynh when she became Olympic Champion in 2008, the summer after my first year at U of C,” she recalls. “I had trained along beside her every day and watched her struggle and fail but ultimately keep pushing onward.”

In this transition from varsity to senior athlete, Wiebe has seen herself go from student to teacher as a role model to the current Dinos. The experience and prestige that originally drew her to the Calgary wrestling program is now felt by those wishing to further their wrestling careers as Dinos. This has been especially true since Wiebe’s Olympic victory last summer, as Ostberg acknowledges a major spike in interest from young female wrestlers across the country.

“To be honest, it’s been a bit overwhelming,” he explains. “There’s lots of interest out of the high school ranks to consider Calgary as an institution and consider the Dinos as the team to wrestle for.”

Alongside this view of the Dinos as a powerhouse of U SPORTS wrestling, there is the desire to train with the reigning Olympic champion. Ragusa notes that Wiebe’s star power alone is not what attracts and influences these new wrestlers. Rather, it is Wiebe’s relatable journey and natural leadership skills that truly elevate the program.

“She’s had quite an impact,” he says. “Erica’s seen as a leader in our club and as part of our program. She’s come up the ranks in terms of being a varsity athlete and having gone through our system. And now as a senior athlete, is a leader and sets a great example to our young athletes.

“We’ve built a real culture of success and grit there,” adds Ragusa, noting that with Wiebe continuing to work with new wrestlers, this strive for excellence continues.

As the 2017 U SPORTS Wrestling Championships begin in Winnipeg this weekend, the leadership and guidance of Wiebe and others with the Dinos is paramount. Ten wrestlers will compete for Calgary, including six men and four women. The 72kg weight class that Wiebe claimed gold in is now in the hands of rookie Sydney Summach, who will carry the torch forward. All 10 who train under the Olympic champion will now begin their own journey of success, starting with trying to achieve the same U SPORTS title that was the foundation for Wiebe’s winning ways.

As the Calgary Dinos head off to Winnipeg to try to knock the defending champion Brock Badgers off of the throne that they have held for three consecutive years in men’s competition and five in women’s, the impact that Wiebe has had will begin to take shape on a national level. Wiebe is aware of this power to influence the team, and strives to assist their fight to follow in her footsteps by establishing herself as a leader.

“I believe my greatest impact is simply leading by example,” she says. “Every time I step on the mats, I challenge myself to be my best and push myself out of my comfort zone.

“I can only hope one day that I can show my teammates that anything is possible.”

From Team Canada to the Carabins: Olympians Savard and Mainville bring experience to U SPORTS Swimming Championships