As the Ryerson Rams senior players reflected on their time with the team at Senior Night, colour commentator and former player Jaime Hills was also reflecting. A cross-town rivalry match with the University of Toronto Varsity Blues set the tone for a tribute to the Ryerson Rams’ senior basketball players. As these veterans were contemplating the end of their time as Rams, Hills has already passed this milestone.

In 2018, the North Vancouver, B.C. native would have been receiving the same farewell ceremony as a member of the women’s basketball team. Instead, she watches the ceremony from the broadcast booth as an analyst for Rams Live, Ryerson’s broadcast team. Seeing her friends and former teammates honoured on the court impacted her greatly.

“I was really emotional,” Hills admits, post-game. “But it was more happy emotions and pride. Which is a new feeling for me, to be proud of my friends. But I’ve been feeling it a lot lately.”

Hills’ journey to this point began in her home province of British Columbia. As a lifelong fan of the UBC Thunderbirds, Hills was an easy commit to the school’s basketball program in 2012.

“As soon as (head coach) Deb (Huband) talked to me, I was like ‘Yup, I’m committing,’” Hills explained. “I wanted to go there. So I actually committed before my Grade 12 year even started.”

With her future in U SPORTS basketball secured, Hills began the kinesiology program at UBC. She would remain for two years as a member of the Thunderbirds until another opportunity arose.

When the Sport Media program began in the RTA School of Media at Ryerson, Hills applied, having been interested in a broadcast journalism career in sports even before committing at UBC. Upon being waitlisted for the full program, she had a decision to make.

“I decided to take a year off, which was the best year I’ve ever had,” she says of her year of traveling, having left UBC while waiting for the Sport Media program to open up. “I think when you go travelling, especially when you go by yourself, like I did, you just figure things out about yourself.”

Among what Hills figured out was that she was certain of her wish to work in sports broadcasting, Ryerson was her destination, and she was going to be a Ram. 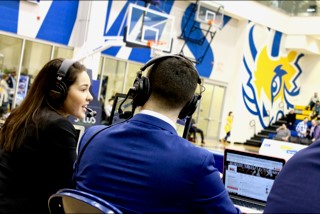 The Ryerson Rams had gone through a complete athletic overhaul in these years, and were inching closer to becoming a perennial OUA powerhouse. But an OUA title continued to elude them. Hills joined the team for the 2015-2016 season, a breakout year for the Rams in both the men’s and women’s basketball programs.

“I was on this team that was just so determined to get it,” Hills said of the team’s drive to the OUA title last March, the school’s first in program history. “I’ve never really seen a group of that many people so committed to one thing.”

Claiming the title in her first year with the Rams left a major impact on Hill’s career, listing it as at the top of her achievements in U SPORTS women’s basketball.

Despite the success she found with her new team, Hills was feeling the strain between the world of athletics and sport media.

After discussions with Rams head coach Carly Clarke, Hills chose to leave the team in December of 2016, partway into the season. With her career path on her mind, she found the support of her coaches and teammates in her decision to turn to commentating for the team. Despite no longer being at practice or alongside teammates on the bench, she has found a new strength in the personal ties she has to the team as an analyst for the Rams.

Alongside Hills in the broadcast booth every game is play-by-play commentator Adam Jenkins, another student of RTA’s Sport Media program.

“Having a broadcaster who played for the team makes for a good broadcaster about that team,” Jenkins says of Hills’ strengths as a commentator. “She really is able to articulate herself from the court to the broadcast booth and it’s been a huge add for us - and for me. I learn from her all the time.”

“I think (Jenkins) was worried that it would be too soon to ask me,” Hills explained of her being offered an opportunity with CUSN. “But I really appreciated it because that was exactly why I stepped away: so I could spend more time working on my career.”

Through CUSN, Hills is looking to highlight those senior players such as the ones Ryerson honoured before the game against the Varsity Blues. Through a new weekly column Senior Spotlight Sunday, Hills explores the playing careers of those who are about to move on from their years in U SPORTS. 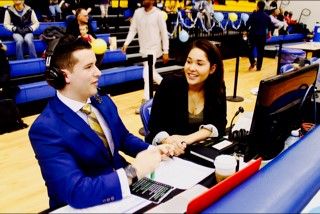 “I think a lot of the times we talk about people playing their five years and what great leaders they are, but we don’t actually go in-depth into these leaders,” Hills explains. “When you spend five years on one team, usually with one coach and some of the same people for four or five of those years, it becomes a part of who you are.”