The Brock Badgers look to continue their dominance on the mat this weekend at the 2017 U SPORTS Wrestling Championships at the Axworthy Health and RecPlex on the campus of the University of Winnipeg.

The two-day meet, which will be hosted by the Wesmen for the first time after the University of Manitoba last welcomed the national championship to the provincial capital in 1993, gets under way on Friday with the preliminary rounds and concludes on Saturday with the placement matches (11 a.m. CT), bronze-medal bouts (12:30 p.m. CT) and finals (2:30 p.m. CT). Selected matches from all sessions – including all finals - will be webcast live on SPORTSCanada.TV

A year ago on home turf at Brock, the Badgers swept both the men’s and women’s banners for the third straight season. The Brock women set a new mark for consecutive titles, capturing the last five, and could tie the all-time mark of six overall set by Simon Fraser with another triumph on Saturday. In men’s competition, the Badgers have claimed a record 16 banners since the inaugural national championships in 1969.

Brock dominated the OUA Championship two weeks ago at McMaster University’s ThérèseQuiqley Sport Hall, sweeping both the men’s and women’s banners for the second straight year – and third in the women’s competition – with 17 medals, 14 of which were gold. 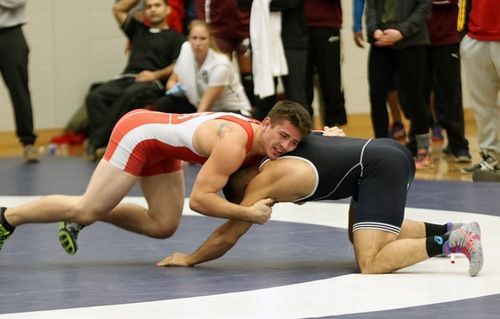 At last year’s national championships, Brock took home seven medals (4-3-0) in eight women’s events and 10 podium finishes (2-6-2) in 11 men’s categories to win both team titles by an average of 29 points. Three individual gold medalists return for the Badgers from 2016, including third-year Tina Mclaren in the 51 kg, third-year Emily Schaefer, who moved up to the 59 kg division after garnering U SPORTS rookie of the year honours in 2015 in the 51 kg, and fourth-year Jevon Balfour, who competes in the 82 kg weight class.

The Badgers will be represented in each of the eight women’s weight classes this weekend, with Alberta Saskatchewan and Guelph next each with five. One the men’s side, OUA champion Brock will compete in nine of 11 divisions, edging Western and McMaster (eight each), along with Saskatchewan, Alberta and Concordia (seven each).

“We are excited about the opportunities that lie ahead for us next week, both individually and as a team at the U Sports Championships,” said Brock head coach Marty Calder. “We expect to have to be at our best to achieve our goals and look forward to the challenge.”

Several new U SPORTS gold medalists will be crowned at this year’s national championship, as only four additional reigning champions are set to compete aside from the Brock trio of Mclaren, Schaefer and Balfour, including Josh Bodnarchuk of the Saskatchewan Huskies (57 kg), Vince de Marinis from the Concordia Stingers (65 kg), Ahmed Shamiya of the McMaster Marauders (2016 champion in 72 kg, competing this year at 76 kg) and 2016 co-wrestler of the year Finn Higgins of the host Winnipeg Wesmen (100 kg) on the men’s side.

No other women’s defending champions are set to compete.

A total of 15 schools will take part in the 2017 U SPORTS Wrestling Championships.

At the Canada West championships held two weeks back in Saskatoon, the Huskies claimed their first women’s banner in program history at home, while the Alberta Golden Bears won their fourth title in five years, and 10th overall after conceding the 2015 championship to Saskatchewan.

“It was an exciting weekend for the Huskie family!” said Huskies head coach Daniel Olver on the historic victory. “Winning our first conference team title at home in front of family, alumni and supporters was an incredible experience for our team. We are excited to showcase our skills at the national championship in Winnipeg.”

“Our Golden Bears and Pandas wrestling teams, compared to the No.1 ranked Brock University Badgers are small in numbers, however, we're looking to wrestle hard against the national champions when it comes to our head-to-head matches,” said Alberta head coach Owen Dawkins. “Our Bears and Pandas have trained very hard all year, have gained a ton of confidence with our showing at the Canada West Championship, and we are ready to wrestle our best at this year’s U SPORTS Championships.”

PAST U SPORTS WRESTLERS OF THE YEAR (last 10 years) - Women

PAST U SPORTS WRESTLERS OF THE YEAR (last 10 years) - Men