On an international stage, the support of your country is everything. For the U SPORTS Women’s Hockey All-Star Team and Canadian Women’s Futsal Team, they are feeling the support before even taking to the field of play.

Both teams will be showcasing their prowess in their respective sports and will be representing Canada and U SPORTS this summer. The U SPORTS Women’s Hockey All-Star Team are to attend 2018 Hockey Canada Summer Showcase in Calgary to go head to head with Team Canada and Team Japan, while the Canadian Women’s Futsal Team heads to Almaty, Kazakhstan to represent their country in the 2018 FISU World University Futsal Championship.

While the opportunities are significant, the costs involved can be daunting. The teams accepted the cost to prove their skill, but knew that they would need some help along the way. For this, they turned to the online sports fundraising program RallyMe.

“The RallyMe campaign is a fundraising tool set up to assist the team - athletes and team officials - in promoting and raising funds to participate,” U SPORTS Manager of International Games Operations Charonne Thomasos said. “The fundraising initiative will help offset some of the travel costs with regards to travel and accommodations.”

The Canadian Women’s Futsal Team, in particular, faces a heavy financial burden to represent their country in the World University Championship. Consisting of top U SPORTS athletes, the individuals have had to fight their way to the national team and are not ready to let anything stand between them and international competition.

Having to travel across continents for a growing sport, the team also carries the weight of the country and the future of futsal on their shoulders. Traditional sponsorship has aided the team, but they needed something more innovative. 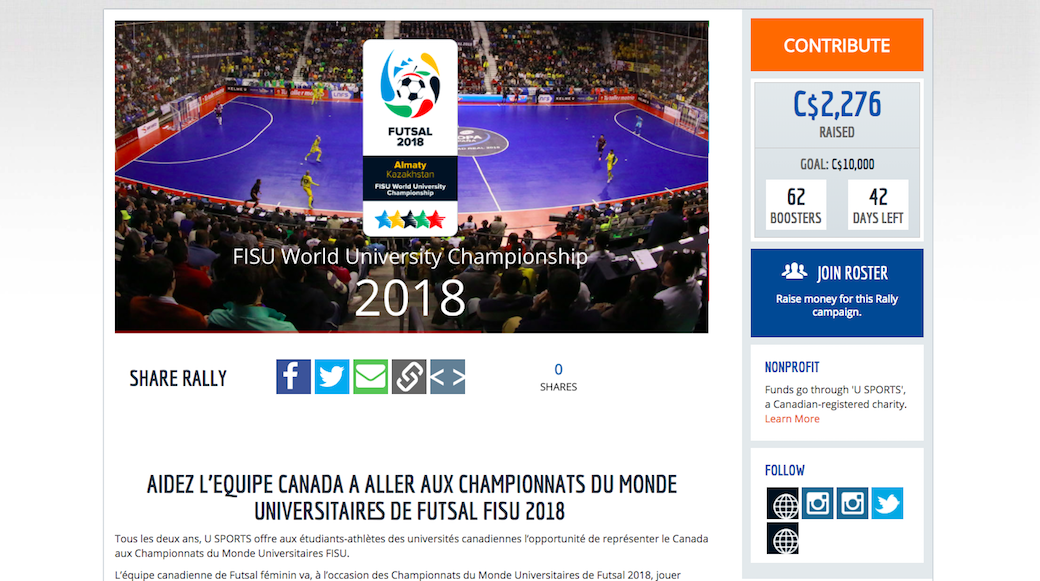 “The original cost per player, and staff, was around $5000 initially,” said head coach Alexandre Da Rocha, who also coaches the UQAM Citadins women's soccer squad. “We’ve got a few sponsors to help us, especially with equipment.”

As the tournament rapidly approaches, the team’s focus has to remain in competition rather than hunting for funds.

“We have to find ways to save money that will not effect our preparation.”

While the teams have primarily relied on family and friend donations to this point, they turn their attention to Canadian sports fans. Having just begun looking for outside support, the team has been humbled by the interest and generosity they have experienced before truly reaching out on a large scale.

“Seeing the reaction is pretty cool,” Da Rocha said. “Canada likes to support amateur sports or any kind of groups or athletes that are trying to participate in a world event. I know people are very generous in our country, which is great.”

For the team, the process has only just begun.

“Now that we’re ready to get into camp and we’re getting closer to competition, I feel like it is going to be easier to fire up the campaign.”

Teams will continue to accept donations throughout the tournament to aid their costs and ensure they can provide the top level of competition. In the meantime, the call is for support to the teams as they exemplify the level of sporting talent in Canada by any possible means.

“Donate, share and support Team Canada in any way you possibly can,” Thomasos said. “The focus of a student-athlete should be just that - academics and athletics - so any support to elevate financial strains in order for Canadian student-athletes to participate in international competition and represent Canada is greatly appreciated!”

In return, Da Rocha promises that the Canadian Women’s Futsal Team will deliver only the highest level of performance.

“These girls have all of my admiration just by saying ‘We would like to go, we know we have to pay, and we will do whatever we need to do to represent our country,'” he said. “We are going into this world championships to finish on top of the podium, we’re not going just to participate. We really want to do well and start something for futsal in Canada.” 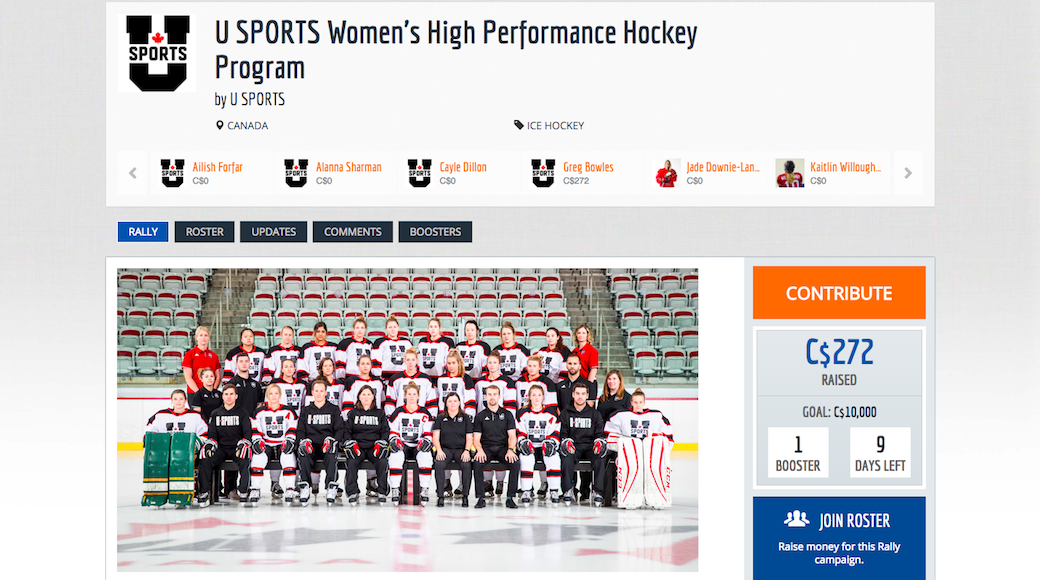 While the programs intend to move towards a model to fully and actively support these initiatives, they are currently reliant on the support of their fellow Canadians and sports enthusiasts. They are fully qualified and prepared to represent their country, they just need some national teamwork.

“Being able to represent Canada in your sport of choice in international competition is a once in a lifetime opportunity and honour for any athlete,” Thomasos said. “Until U SPORTS can move to a sustainable program where athletes do not have to worry about expenses, U SPORTS will continue to look for ways for the sports community to “rally” together in support of university student-athletes on the international stage.”

You can provide donations to the U SPORTS Women’s Hockey All-Star Team and Canadian Women’s Futsal Team here and here to contribute to the growth of these programs on major stages.

Getting to know your U SPORTS coaches: Steven Johnson, Ottawa Gee-Gees