On Thursday, U SPORTS celebrates the third annual International Day of University Sport (IDUS), established in 2016 by the International University Sports Federation (FISU) and proclaimed by UNESCO. IDUS formally recognizes and commemorates the role that sport and education plays in fostering personal and collective development of individuals in this community. For student-athletes — past and present —the relationships and success they experience during their university career is deeply rooted within their communities, identities, and souls. For some, this period in their lives represents the first time they felt a sense of belonging or an opportunity to make history for their school. In their own words, several U SPORTS alumni share what IDUS means to them.

Five years ago, Javon Masters was in his final year of high school in Kitchener, Ont., getting ready to make one of the most important decisions in his life, one that would affect the trajectory of his academic and athletic career.

“There were a couple of schools interested in me all over the country,” Masters says. “But my trainer, at the time, got me in touch with (UNB) coach (Brent) Baker and I came out for my visit in April.”

It was his first time visiting the east coast and the five-story Richard J. Currie Center – University of New Brunswick’s athletic center – with its enormous glass windows, 1,400 stadium seats, and flashy new basketball court caught his eye. Situated along the St. John river in Fredericton, this was a school far from the sports-crazed city of Toronto, but he saw the potential and a few weeks later he committed.

“I took it as a challenge to go to a school that wasn't necessarily known for basketball,” he says. “That was one of the main things that drove me.”

His impact was immediate. In his first year wearing the red and black, he averaged 35.5 minutes and 27.4 points per game, capturing the national scoring title in the process – a rare feat for a rookie. It was 2014, and for the first time in a decade, the Reds had finished with a .500 record. 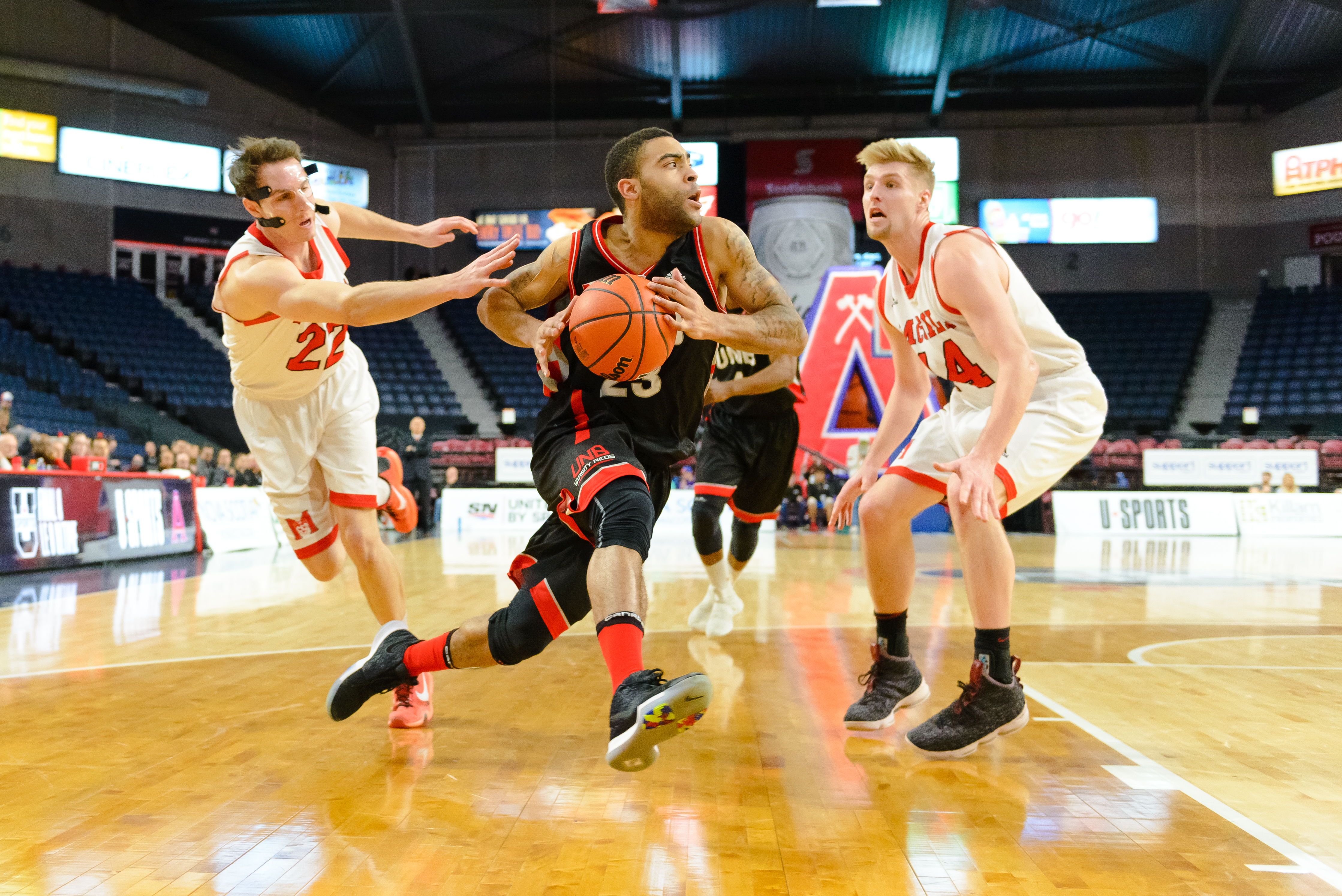 For the next five years, Masters and his coach swiftly built a team that would lead them to the school’s first AUS championship since 1967 – putting UNB on the basketball map in Canada.

“My relationship with him has grown to a point that he's a father figure to me and we can talk about pretty much anything,” says Masters of Baker. “It doesn't necessarily have to be basketball, just certain things in life that we can talk about and discuss.”

Whether it was the support he received after the death of a close friend in his second-year, or difficulty with classes, he says Baker was there every step of the way.

“He is a person who will go to bat for you about anything, whatever you are going through, because he cares about you,” he says.

When he walked away from the UNB campus for the last time as a student-athlete in May, he capped his university athletic career with 2,407 points to earn the U SPORTS All-Time Career Scoring record.

“All the work I put into getting to that number, and just being able to call myself the all-time leading scorer in university sports history here in Canada, is just a phenomenal achievement that I'm proud of.”

It was his success on the court and in the classroom, that has led him to becoming a professional basketball player. In August 2018, Spanish basketball club, Rio Ourense Termal announced they had signed Masters for the upcoming season. Once again, he finds himself in new territory, having never been to Europe before. However, he won’t be alone. A few times during the year, he will be facing off against former Ottawa Gee-Gees guard Caleb Agada, who plays for Melilla Baloncesto, another Spanish club.

Like many athletes, success didn’t always come early or easily for Erica Wiebe. The Stittsville, Ont., native began her wrestling career Calgary Dinos in 2007 at the encouragement of then Dinos assistant coach, and women’s wrestling pioneer Christine Nordhagen.

“I was wrestling at the university club level for the first time, and I was completely and utterly point less. Literally,” she wrote in her blog. “I had not scored a single point in the past two months, I was sore in places I never knew existed, tired, worn out, and questioning everything I knew about myself.”

Her struggle continued when she failed to make the varsity team in her freshman year, losing a wrestle-off to a fourth-year veteran of the team.

“I learned, and I showed up every day hungry for more,” she says. She spent the next year on the mat training alongside women that she describes as ‘”a tribe of strong, fierce women.”

The training motivated her as she grinded away on the mat, her studies, and at work to afford her schooling. The hard work paid off. In her second season with the Dinos she won the U SPORTS wrestling individual freestyle title in the 72 kg class, which helped her team win the overall women’s wrestling team championship.

“That was an incredible feeling to stand on the podium together,” Wiebe says. “We had an insanely strong team from top to bottom, and it was such a proud moment to be a Dino.”

Her success at the university level quickly translated internationally. She made her international debut at the 2013 FISU Summer Universiade in Kazan, Russia. It was there that she got to experience for the first time what it was like to live alongside elite Team Canada athletes in the village and compete against athletes from around the world.

“I won a bronze medal and it was my first realization that I could compete on the international stage,” she says.

At the three FISU events she competed in on behalf of Canada, she won a medal in every colour including a gold at the 2014 World University Championships. That year she dominated her opponents, winning every individual tournament she entered, going undefeated in 36 matches.

It was all preparation and practice to ultimately make the Canadian Olympic team. For eight years she had fallen short of earning a berth on the squad, patiently training, and supporting her teammates by going to the London Olympics as a training partner for Leah Callahan, a fellow Dino teammate. Her time came when she was named to the team after qualifying at the Pan American Olympic Qualifier in Texas. Buoyed by friends, family, and her team she put on a dominating performance in the finals, defeating Guzel Manyurova of Kazakhstan 6-0 to win the gold medal in the women’s 75 kg freestyle. She became the second Dinos alum to win an individual Olympic gold medal and third Canadian to win an Olympic gold in wrestling.

Despite wrapping up her studies and graduating from the University of Calgary, her ties to the school remain strong.

“I still train every day in the Dinos wrestling room and I look forward to training alongside these up and coming studs,” she says, adding her focus is now on the World Championships in October in Budapest and the Tokyo 2020 Tokyo Olympic Games.

Kevin Chief grew up in Winnipeg’s inner city in the 1990s. He was one of nearly 45,000 Indigenous people living in Winnipeg at the time, according to census data. Among indigenous families in Winnipeg, the incidence of poverty was estimated at 60 to 70 per cent and his father, a single parent, did his best to shoulder the economic burdens they faced. Chief came of age in an era before the Truth and Reconciliation Committee existed — where the colour of his skin and his last name served as visible reminders that he was indigenous. There were many influences and enormous barriers that threatened to pull him back into the fold of poverty — his father passed away when he was 18 years old — but basketball gave him the support he needed to aim higher.

“The University of Winnipeg removed one of the biggest barriers I had in my life which was economic – I was poor,” Chief says. “I got an athletic scholarship to be a student-athlete.”

It was a tremendous achievement considering three out of four indigenous people in Winnipeg had less than a Grade 11 education. By attending the University of Winnipeg, he joined one of the top-ranked basketball teams in the country.

“At a very young age, I remember Bill Wedlake, basketball coach at the University of Winnipeg, was always reminding us that booster club people and people in our community were contributing to the University of Winnipeg so they could give me a scholarship so I could go to university and be a student-athlete,” he says. “It was never lost on me, that part of that support that I constantly received, I would have to give back in the same way.”

Community involvement and striving for academic and athletic excellence were just a few of the principles that Wedlake instilled in the young Chief.

“The people who had the biggest influence on me were the people who wanted me to be proud of who I was both as a student and as an athlete, but also my cultural identity as well,” he says.

After graduating from university, Chief maintained his commitment to bettering the community through civic participation. He co-founded the Winnipeg Aboriginal Sport Achievement Centre, an organization that uses sport, recreation and culture to engage children and youth.

People began to take notice of his involvement in the community and encouraged him to pursue politics to make an impact at a policy level. He was elected to the Maintoba Legislature in 2011 where he spent the next six years representing the electoral district of Point Douglas.

“The best job I ever had was being a representative for a neighborhood that had given me so much and being able to represent those values and principles in the Manitoba Legislature,” he says.

Since leaving politics, Chief has found a new purpose as vice president of the Business Council of Manitoba helping youth, the fastest growing segment of the population, achieve their potential and play a greater role within the economy. He attributes his personal and professional career success to “the network and opportunity that the University of Winnipeg” gave him through the athletic scholarship and emphasizes the importance of supporting student-athletes.

“Every time someone contributes to a university scholarship or university bursary or give back to an athletic department in some way,” he adds, “What they are doing is investing in role models and ambassadors to go out and be great community members.”

Getting to know your U SPORTS interns: Matt Sakala, Events and Awards