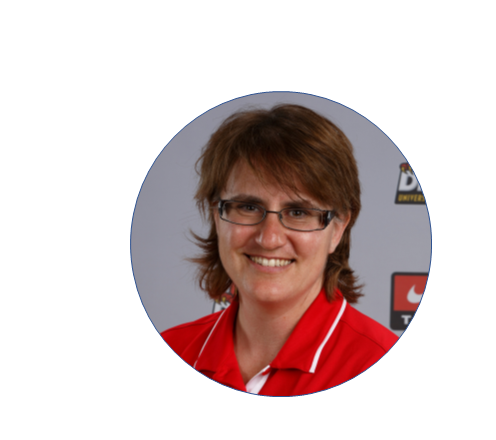 1.How did you get to your current position, and what do you enjoy most about our job?

In 1993, there was a small advertisement on the bulletin board of U of M’s Athletic Therapy clinic that advertised for an assistant athletic therapist.  I was just starting the exam process for the CATA and thought I would not be qualified.  Three months later, my supervisor Glen Bergeron suggested I put my name forward as no one had accepted the job.  I found out why: it was eight months of work, roughly 80 hours a week, for $10, 000. I valued the experience more than money, so I took the job.  Each year the salary increased a little until they made me full time in 1997.  In 2004, I became the head therapist for the Calgary Dinos.

My job is truly about Ying and Yang. There are days I absolutely hate my job. I hate it because it is so challenging physically, mentally and emotionally.  But that is also why I love my job.  I never know what is going to come through the door.  I don’t know if I am going to break bad news or good news. I might take someone out of the game or return them.  I don’t know if I am going to deal with tears of frustration or joy. My job is to work with sport, but the job parallels it too.  Highs are high, and lows are low.  That is what keeps the job real. It is an absolute privilege to walk the path beside an athlete and try to help them achieve their goals.

A coach I once worked with once told me to always surround myself with people who believe in you. There are two people who have had the most influence on my career.  Early on, it was the head athletic therapist Dale Butterwick who had the most influence on me in the first 12 years of my career. He embodied hard work, high standards and strong ethics.  He encouraged me to develop my skill base and even financially helped me out every now and then to take courses.  He valued research, encouraging me to work with various projects that brought great incite to the delivery of care. Most of all, he taught me that conflict was not a bad thing and encouraged me to always work through conflict collaboratively.  This of all things created confidence in my professionalism.  He was responsible for a lot of my personal growth.

All professionals need mentors even when they have been in the game for 25 years!  Preston Wiley has been the other important influence in my career. After becoming the head therapist, I worked closely with Dr. Wiley as he was the head varsity physician.  His no-nonsense, politically correct, calm yet blunt meeting savvy is legendary. He is passionate about sport but did not let that bias his decision-making process. The athlete’s best interests are always in paramount. He is a sought-after committee member in sport medicine, risk management, or research committees. I have developed as a professional because he has been kind enough to bring me along on these projects.

3.What is your greatest sporting moment or achievement?

My answer is probably not what you would expect. I have been on the bench for national championships, world championships, and world record performances. As wonderful as they were, they were never my greatest sporting moment.

My greatest sport achievement was a family affair.  For Canada 150, my husband and two kids aged 8 and 10 backpacked from Mount Norquay (Banff) to Lake Louise.  The trip was eight days, 79 km, and over three mountain passes. My pack started out well over 80 pounds.  We had a few nervous minutes when we encountered a curious grizzly bear, but overall, arriving at Lake Louise, greasy, stinky, and with only a few blisters, was a fulfilling experience. I have told athletes about this and many of them remind me it is only a 40-minute ride by car.  I find this odd and remind them they compete in sport; something they could just watch on TV. Like them, I do it because I am pushing myself out of my comfort zone to do something many cannot.  Most of all, I own the experience.

4. How would you define a Dinos student-athlete?

I would describe a University of Calgary athlete as smart and high achieving. First of all, they have to be, as the University of Calgary has high academic standards. These are two qualities that you have to possess in order to get in and then stick. They are curious yet very analytical, and always striving to be better.  I believe U of C athletes really discover their potential because of this.

Recent alumni Andrew Buckley and Hayley Wickenheiser are examples of that drive. On the flip side, I think this also leads to a bit of a high-strung group. Over the past five years, the department has recognized this and worked to create opportunities for the athletes to interact and socialize to combat this. It has been fun observing the community feeling that has developed within this group. It is not just teams interacting amongst themselves, they are supporting one another as athletes.

5. What does success look like for the Dinos athletics program?

There are many coaches, athletes, and administrators who believe metric for varsity success revolves solely around the championships won. I don’t see it that way. I believe success is more about the type of culture you create. When you foster strong healthy habits such as work ethic, time management, problem solving, conflict management, honesty, integrity, accountability, etc., athletic success will follow. These are foundational skillsets for all facets of life not just sport. To me, the metric of success of a varsity athletics program actually is found within its alumni and the support it receives from them.

6.What’s the biggest challenge you face in today’s sports world?

The biggest challenge in the sport world that I face is meeting expectation. Sport medicine has advanced incredibly in my career. There is so much more information about injury management that it is hard to keep up and more importantly, fund. Twenty-five years ago teams were happy there was someone around who could tape them and do first aid.  The appetite for service from sport medicine professionals has grown exponentially to the point there is a seven-day-a-week, 24-hour-a-day expectation of service.  Universities are having difficulties managing this growth with a limited number of staff therapists and large number of undergraduate students.  Something is going to give, I am just not sure what.

I started back when U SPORTS was the CIAU. There were no scholarships. Athletes had to work in the summer and sometimes during school, to make ends meet. There were no mandatory practices in the summer. Since scholarships have been introduced, the demands on student-athletes time have increased.  Many teams train all year round with some athletes putting in 40-plus hours a week training and preparing for their sport, which when managed well leads to success. Not managed well, it leads to injuries, drop outs and mental health issues.

I would like to see U SPORTS become leaders in athlete development. To do this, they will have to put money into employing the experts in physiology, psychology, biomechanics and sport medicine to educate coaches, and athletics staff about training loads, recovery and injury prevention.

I would like to sit down with Ron MacLean. He has made a career out of celebrating the stories behind sport.  I would ask him what athletes or coaches in his career that have inspired him the most and why. I am certain he would give me incite into athletes that I have not been privilege to know.

Be prepared to be surprised. The caliber of the sport is fantastic. I often buy tickets to Dinos games as birthday presents for their friends. Their parents are always impressed (sometimes shocked) with the quality of the sport.

As you already know I am an outdoors person. We canoe and backpack a lot in the summer.  I am also a very creative person. I like to draw, paint, sew and quilt. The only problem is, I don’t have a lot of time for these pursuits as I used to prior to having children.

Now, most of my energy is put into gardening. I have a large garden - growing flowers is just a different way to mix and match color and texture. The large vegetable and fruit garden are poured into jars and freezer bags to be consumed in the winter. I joke that I am the purveyor of 1950s housewife knowledge. I take great satisfaction in feeding my family healthy, homemade food.