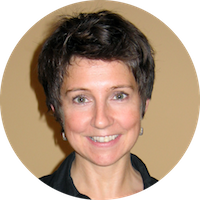 My position began as part-time contract work back in 1995. Over the course of that year, my skills were highly sought after and as a result, the position became full time. I have been here ever since. As an in-house graphic designer there are many challenges. The balance between staying on brand and keeping things fresh is a constant struggle. My favourite aspect of this position over the years has been seeing the student-athletes grow and mature, seeing them succeed and gain confidence, and ultimately being able to help them in small ways.

There are many people who have influenced me over the years, including fellow designers, athletic directors and colleagues. A past boss taught me much about planning, time management and being an effective leader, which has allowed me to make the most of my skills in this environment.I don’t really read trade magazines or frequent art galleries; I don’t engage with the culture in a traditional way that maybe a lot of designers do. I get influence from everyday life – going to the market or seeing something by accident. I think my influences are more to do with my mood or character and general culture like books, TV and film that can’t really be ignored.

Not applicable unless you want to count my beginner ballet class this past autumn!!

4. How would you define a Dalhousie University student-athlete?

Hard-working, community oriented and passionate about the Tigers program.

5. What does success look like for the Dalhousie University athletics program?

We are here to support our student-athletes first and foremost, so of course we all want to see the banners indicating a championship win at the end of the season, but we also look beyond that obvious indicator. We try to recognize the daily and weekly small successes that ultimately contribute to the big ones, and we embrace a sense of family that keeps us motivating each other.

In the world of marketing & communications for sport, video is our biggest challenge. Finding the talent, the time and the resources to achieve any sort of consistent video presence is something we struggle with.

I’d like to see it continue to move forward to becoming more and more inclusive and diverse.

Clair Williams, Deputy Team Principal, Williams Racing F1 Team. She was promoted over her brother in a male dominated family business, against the wishes of her father. With a keen knowledge of communications and marketing, along with a learned knowledge of racing and finance, has kept a struggling company in the mix in a very expensive and very competitive F1 lineup. She has a long way to go but shows determination and heart when discussing the challenges ahead for the company/team. I would particularly want to ask her and discuss the challenges of being in a leadership role in a male dominated sport.

I would tell them to give it a try and expect to be pleasantly surprised! After the Final 8 basketball tournament that just took place in Halifax, I have nothing but admiration for the student-athletes who give it there all on the court. It’s a shame it is not more accessible via streaming. That may be the key to getting people interested in following university sport, in such a large country.

Away from work I enjoy travel, reading, hiking the trails of HRM, playing video games, and watching Formula 1.

Getting to know your U SPORTS athletics staff: Suzanne Fenerty, Ryerson Rams