Brett Layton of the Calgary Dinos men’s basketball team and Kylie Schubert from the MacEwan Griffins women’s volleyball squad are the U SPORTS Male and Female Athletes of the Week for the period ending Jan. 5, 2020.

It was another record-setting weekend for Calgary Dinos forward Brett Layton.

The Faculty of Law student set a new Canada West record on Friday night with 14 offensive rebounds, breaking the previous mark of 13, set by Tony Richter of the Winnipeg Wesmen on Nov. 30, 2002.

Those 14 offensive boards were part of a 24-rebound night for Layton, who also collected 19 points, two assists, two blocks, and four steals in a 94-70 win over the UNBC Timberwolves.

Earlier this season Layton became the first player in Canada West history to record 40 points and 20 rebounds in a game, when he did it on Nov. 23 against the Trinity Western Spartans. 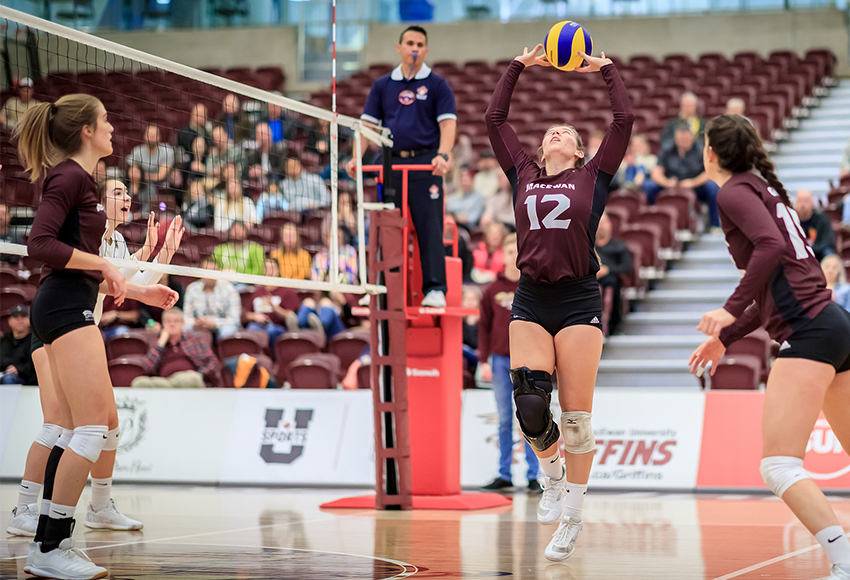 With 53 assists in Friday’s 3-1 victory over the Saskatchewan Huskies in Saskatoon, Schubert tied the MacEwan single-game record for most in a Canada West contest.

Her total matched the mark that Rebecca Martin had in a five-set MacEwan win over Calgary on Jan. 24, 2015.

Only three players have had more assists in a match this Canada West women’s volleyball season, but all of those have come in five-set games, not the four that Schubert accomplished her mark in.

Schubert’s ability to spread the ball around was evident in the Friday night’s victory as MacEwan had four players in double digits for kills (Hailey Cornelis -17, Haley Gilfillan – 16, Mckenna Stevenson – 13 and Lauren Holmes – 11).

In Saturday’s 3-0 loss to the Huskies, Schubert still managed to produce 32 assists.Combined in both games, Schubert added 20 digs.