The Bronze Baby and an Olympic medal. Lisa Thomaidis is big-game hunting.

For the head coach of the Saskatchewan Huskies women’s basketball program and the Canadian women’s national team, the next six months have the potential to transcend her career, as she continues to build on her already lengthy coaching resume.

Along with an impending chase towards a podium finish at the Tokyo 2020 Olympic Games, Thomaidis has guided the Huskies to a 15-1 record this season coupled with a No. 1 ranking in the nation and appear ready to make yet another run at the Bronze Baby at the U SPORTS Final 8 in Ottawa in March.

But her success story in Saskatoon isn’t a tale composed overnight. Thomaidis came to the Huskies program prior to the 1998-99 season, becoming the head coach of a team holding a 24-176 record in their previous 200 regular-season contests in Canada West.

“Early on, there were many days that I thought ‘How are we ever going to make playoffs or have a winning record or build a program that was going to be respectable?” Thomaidis recalls.

“At the time there were only six teams in Canada West, and competing against the likes of Deb Huband, Kathy Shields, Trix Bakers, Shawnee Harle, they had powerhouse program. We learned very quickly and got to measure ourselves against the very best in the country, and I think that was a big reason for our improvement and trying to figure out what it was going to take to be a strong program.”

Slowly but surely, Thomaidis changed the culture with the Saskatchewan program. In 2000-01, she guided the Huskies to their first postseason appearance in 18 years, foreshadowing the future of an impending hoops powerhouse on the prairies.

Fast forward to the present day, and Thomaidis’ concerns are a thought of the past. The Huskies program has bloomed into a national powerhouse and are chasing after their 11th U SPORTS Final 8 appearance in the last 12 seasons. Under her tutelage, Saskatchewan has qualified for the playoffs in 15 consecutive campaigns, winning six CW championships in that span, including three conference banners in the last four seasons. 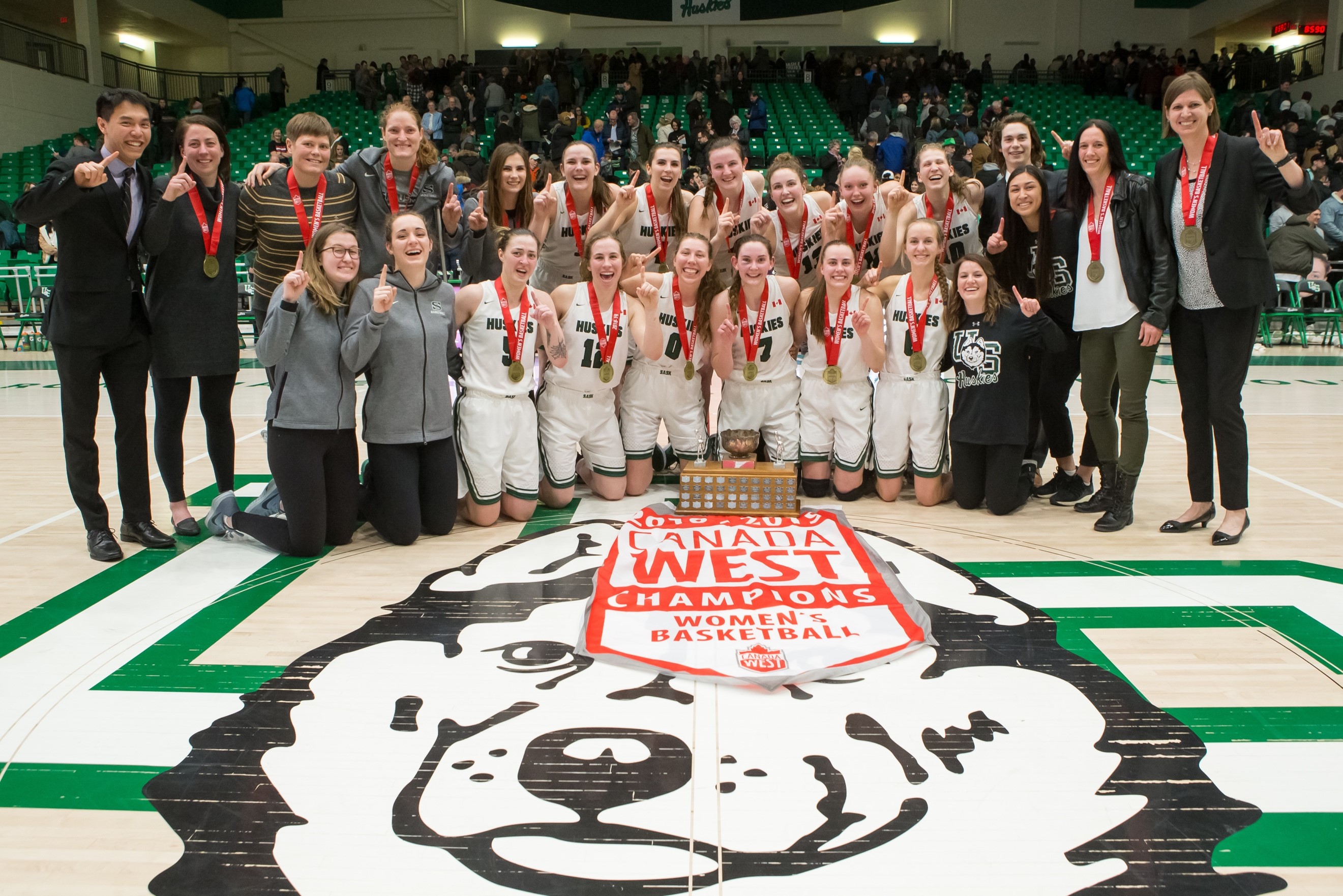 “I had no idea this was going to be possible when I first came here,” Thomaidis explains. “I had very little knowledge of the program before I was hired. I was so young, but there was nowhere to go but up.”

Her presence and stature on the national stage, coupled with the program’s success in U SPORTS, has transformed Saskatchewan into an attractive destination for recruits not only in Canada but across the world. The Huskies have brought in players such as Sabine Dukate, a fifth-year guard from Latvia, and Claudia Lomba Viana, a first-year guard and native of Portugal– helping bolster their program’s reputation across the nation. Dukate was also named CW Player of the Year and a U SPORTS First Team All-Canadian last season.

“When you hear of players that are wanting to come - whether they are local and have passed up Division I scholarships (or) whether they’re coming from another province or another country to be a part of this – I think that’s the ultimate compliment,” adds Thomaidis. “I think it says a lot about our program, coaching staff, continuity and the culture we’ve been able to build here. I certainly take a lot of pride when those are the types of people who want to join our program.” 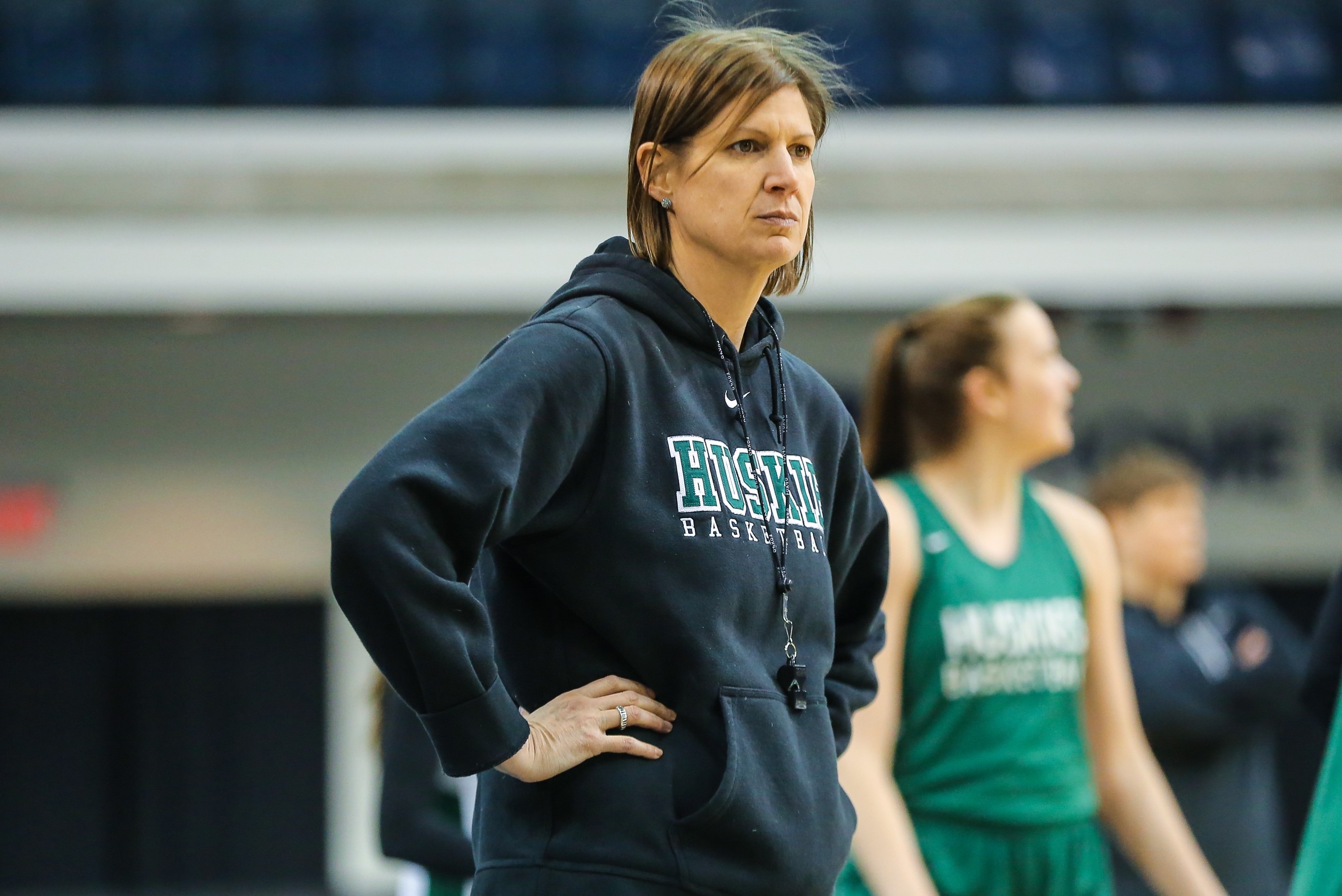 The Huskies, who have fallen just short in back-to-back seasons of winning it all – including reaching the semifinals last year, this season the focus is on instilling a different mindset. The hope is that this time around, the team will peak in stride and re-reach the pinnacle of Canadian university women’s basketball.

While Joel Embiid may be known for “trusting the process,” in Philadelphia, Thomaidis is hoping to make “enjoying the process” her team’s motto this season.

“We’ve spent a lot of time talking about that and having a bit of a lighter attitude, A lot of our players recognized that,” says Thomaidis. “They are very driven, but you can lose sight of some of that joy along the way if you’re only focused on the end result. For us, we don’t talk a lot about the end result. We talk a lot about getting better every day; we talk a lot about improvement, where we see growth and can grow and from there, the results take care of themselves.”

However, Thomaidis’ change in philosophy with the Huskies this season hasn’t been the only adjustment for the long-time bench boss. Balancing two high-profile positions is even trickier in 2019-20 thanks to the in-season commitments from Canada Basketball because of FIBA’s new Olympic qualifying format.

Thomaidis anchored the Huskies sideline over the weekend in a pair of highly-anticipated clashes in Saskatoon against the No. 2 Calgary Dinos, before handing over the reins to lead assistant coach Claire Meadows and officially shifting her attention towards the Canadian national team for their Olympic qualifying tournament in Ostend, Belgium, set for Feb. 6-9.

“A lot of time, energy and focus have been directed on that goal (of getting to the Olympics),” says Thomaidis. “But at the same time, our Huskies team has been doing really well. Having three fifth-years on our team, we certainly don’t want to take time away from them. We want to see how well they can do as they finish their career here. We have a pretty special group right now. I’m splitting time and definitely devoting lots to the national team, but at the same time, still making sure I’m around for this team here as well.”

For Thomaidis, who was an assistant coach for the Canadian program for several years before ultimately being named the head coach in 2013, a podium finish is the end goal this summer in Tokyo.

While there is still work to do as Canada attempts to improve off a seventh-place finish at Rio 2016, this time around feels different. Thomaidis has elevated Canada into an undisputed national powerhouse. At No. 4 in the FIBA world rankings, the country is higher than ever before, with expectations to match.

“More and more of our players are getting to the WNBA or playing on the top teams in Europe, playing in Euro League, and they’re dedicated and have always come back to our national team, which has been amazing,” says Thomaidis. “But with that comes higher expectations. Being ranked fourth in the world isn’t good enough. Now it’s all about medalling at a world championship or Olympic Games. The pressure only increases as you ascend the rankings, and again, we’re relishing that challenge and pressure.”

“The saying goes, ‘Having that pressure is a privilege.’ Being in this position where we do have this pressure and that expectation on us to medal is a great thing. To be actually in that conversation, and to be at a point where Canada is considered a medal hopeful in women’s basketball is a huge accomplishment, but it’s a little of unfinished business. Until we get that medal, we won’t be satisfied.”

With that said, qualifying is still at the centre of mind for Thomaidis. The Canadians were drawn into a group with host Belgium, Sweden and Japan, who have already qualified as host, meaning only two qualifying spots are up for grabs.

With Japan and Belgium each entering the tournament ranked ninth and 10th respectively, along with Sweden sitting in 22nd, Thomaidis is quick to point out the week overseas won’t be a walk in the park for Canada.

“We basically have to finish in the top two out of three,” explains Thomaidis. “We’ve got a tough draw; there is no doubt about it. But for the Olympics, it should be really tough to get there. For us, we’re going to need to be playing our best, and we’ll be ready.”

With rigorous schedules, comes potential rewards. In the case of Thomaidis, that begins with checking an Olympic medal off her career bucket list, along with her desire to bring home the second national championship in Huskies program history.

As for the immense potential of the coming months, the Dundas, Ont., native pointed to a similar stretch of success for comparison that began in the summer of 2015. That’s when Thomaidis guided Canada to gold at both the 2015 Pan American Games in Toronto and the 2015 FIBA Americas Championship in Edmonton, and a few months later, led the Huskies to the 2016 U SPORTS title.

“That was pretty unbelievable,” adds Thomaidis. “This year is setting up to be a really special year as well.”

Thomaidis’ presence in Canadian sport is impossible to ignore. In a column from this past September that ranked the 20 most significant figures in Canadian hoops, Thomaidis was listed No. 6, trailing only Raptors president Masai Ujiri, head coach Nick Nurse and Canadian national team star Kia Nurse.

“I’ve been in this position for so long and been involved for so long, but it’s humbling for sure to open that up and see my name there was something I never even thought would be in the realm of possibility,” says Thomaidis. “Again, anytime there are women on those lists, that can impact our game and the game of basketball and women playing the sport, it’s great. The fact that there were a few women on that list, we just need to continue to get more and more.”

Thomaidis’ continued presence in women’s sport has allowed her the opportunity to witness many transcendent moments within the game. However, while landmark moments such as the recently announced WNBA collective bargaining agreement, and marketing opportunities like Kia Nurse serving as a March Madness analyst, Thomaidis makes clear there is still a long way to go for women in sport.

“Those are really big stepping stones in the growth of the women’s game and women’s sport in general. We’re a far cry from equity for sure, but any of these stepping stones along the way are a step in the right direction,” explains Thomaidis. “The more we can continue to grow the game, to expose the game to mainstream media, to have our athletes in the media in the forefront of the conversation…those are all really important steps that need to happen sooner rather than later.”

While much of the focus regarding the growth of Canadian basketball has centred around the men’s program, Thomaidis and company have an opportunity to reshape that narrative in the coming months, as they’ll attempt to craft a story impossible to ignore.

“There is lots of excitement on the horizon.” 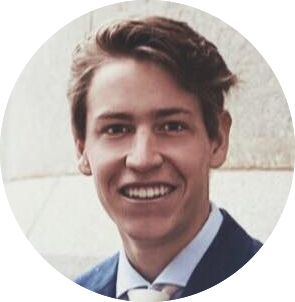 Matt is a third-year english student at the University of Saskatchewan in Saskatoon, where he serves as the Sports Information Assistant with Huskie Athletics. Previously, Matt was a sportswriter for the campus newspaper, The Sheaf. His portfolio also includes bylines in the Saskatoon StarPhoenix, Regina Leader-Post and SCOREGolf Magazine.