But the former student-athlete, coach and athletic director with ties to three different Canadian university athletic programs has trouble pinpointing her career highlight.

“It’s just so hard to do it, I can’t compare them,” said Dufresne. “Each one of them are a completely different field. Winning a national championship as a player, as a coach and as an athletic director are not the same.”

The retired athletic director would know well, following a four-decade career that culminated on June 7, 2017 when she was presented with the Austin-Matthews Award – given each year to an individual who has made an outstanding contribution to interuniversity sport. Dufresne, a graduate of the University of Ottawa, McGill and the University of New Brunswick has a long resume of accomplishments in university sport. She was a national team basketball player who represented Canada at the 1976 Olympics in Montreal, and also played for the Gee-Gees as a student-athlete.

The Halifax native then embarked on a highly successful coaching career, first at UNB in the early 1980s where she was U SPORTS Coach of the Year in 1983.  A year later, Joyce Fromson – the only other Manitoba winner of the Austin-Matthews Award in 2002 – recruited Dufresne to coach the Bisons women’s basketball team.

“At the time it seemed like a very good career move for me,” Dufresne said. “I thought I’d be there seven or eight years.”

She ended up staying for 17 and taking the Bisons to new heights, winning five Great Plains Athletic Conference (GPAC) championships, and was named GPAC Coach of the Year five times. She also made it to five U SPORTS national championship finals with the Herd winning three banners, including back to back titles in 1996 and 1997. Each championship was special for Dufresne, but the 1996 team held a special place in her heart.

“The first (national championship) was with a team that wasn’t expected to win, so pulling together and winning was fabulous,” Dufresne said.  “Then I lost my mom when my son was seven weeks old in 1995 and that was the year we won our second national championship. Seeing what our players did for me to help me get through it – they were unbelievable. In spite of the heartache of losing your mom, it was an incredible year.”

The three-time U SPORTS Coach of the Year then spent 15 seasons as Manitoba’s athletic director, and by that time, her roots were firmly placed in Manitoba. 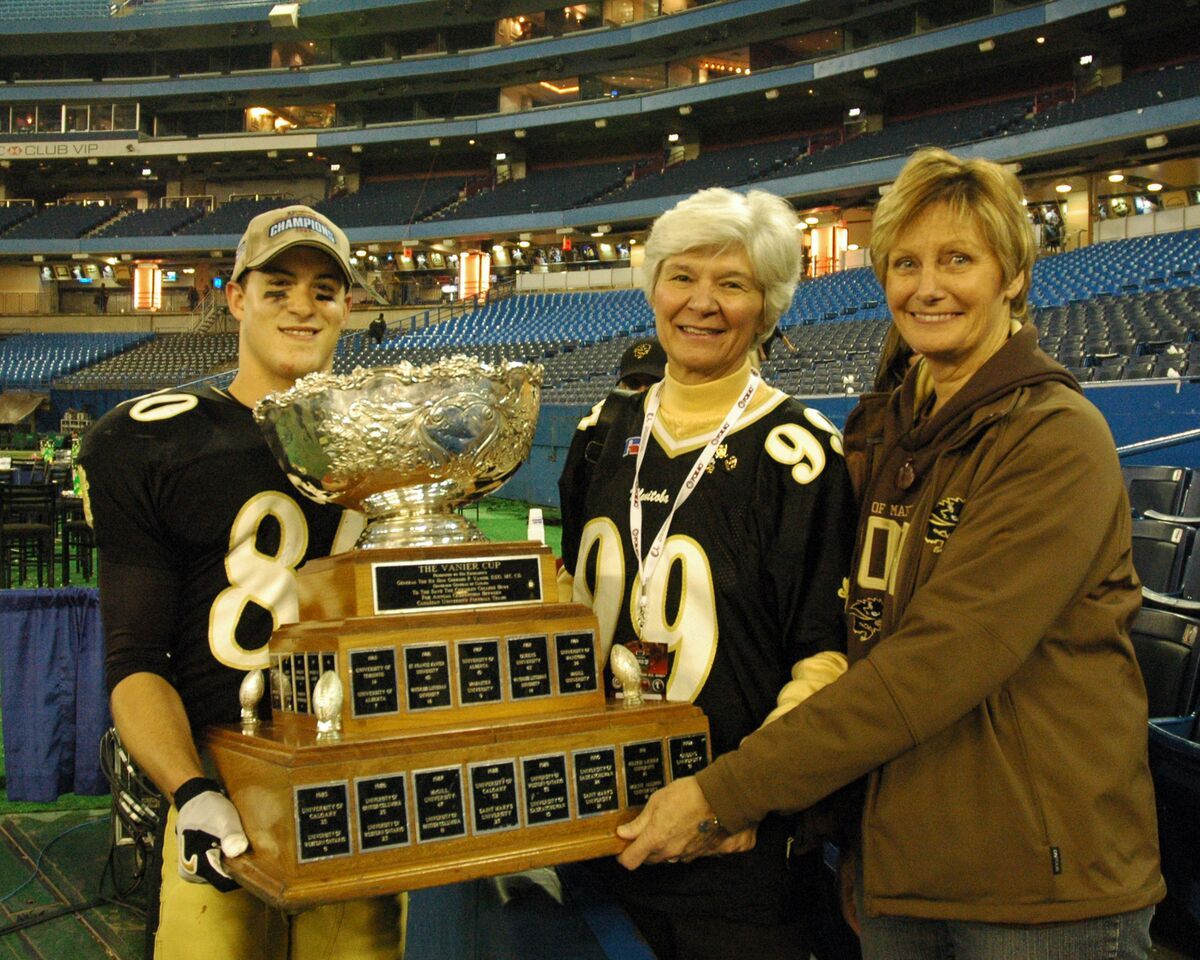 “I did have an opportunity to leave,” Dufresne said. “My husband is from Manitoba, so family was there. By that time my brother had moved to Winnipeg, and Winnipeg’s a great city raise your kids in. I don’t like the winters, but the summers are fabulous.”

The Austin-Matthews Award is a special honour for Dufresne, but the real honour was hearing from her former competitors and colleagues and knowing she left an impact on university sports in Canada.

“It’s special to me because I look at the people who have won it before,” she said. “Especially the woman who recruited me to the University of Manitoba, Joyce Fromson. Being recognized for doing something that you love is great, it’s a bonus. To have people you worked with, coached with, played with, and coached come back and say such nice things – it doesn’t get any better than that.”

At the Bison Brown and Gold banquet in April of 2016, Dufresne’s last as a Bison, the outpouring of kind words and support was on full display. One could clearly see the mark left on the university by Dufresne during her time not only as athletic director, but as a coach.

“I think as a coach you see the impact you have on the young women that you’ve coached, and that is gratifying” she said. “As an athletic director, it’s harder to see what kind of impact you had until you’re leaving. A lot of people have said that I impacted them and saw me as a role model. I did the best I could and I supported them all the time. They know how much I cared about them, and that was important.”