“After an extensive and thorough search, we are pleased to welcome Dianna Ros to the Bishop’s Gaiters coaching family,” said Matt McBrine, Director of Athletics and Recreation at Bishop’s. “She is an impressive person who has high values, outstanding character and is highly respected.  Her basketball resume both on the court and bench speak for itself and she comes highly recommended.  This is a big win for Bishop’s and our women’s basketball program.”

Ros, 30, is a fluently trilingual (English, French and Vietnamese) native of St. Laurent, Que., who graduated from McGill in 2014 with a science degree in physical therapy. She then completed a master's degree in the same field, which led to a physiotherapist position at several Montreal-area clinics.

Her coaching career began in 2017 as an assistant with the Basketball Québec under-15 program and since then, spent four years as an assistant at Vanier College. In 2021 she joined her alma matter as the Women’s Basketball Associate Coach. She was also appointed bench boss of the Québec U-15 squad and continues to sever in that role. She is NCCP certified.

“I am excited for the opportunity to be a full-time head coach at a University in Quebec that empowers women, prioritizes sport development and that is heavily involved in the community,” said Ros. “I can see the impact that sports have in the community, and I can’t wait to be a part of that.

“I want to create a safe environment for young female student-athletes to develop, grow and compete in. I believe in transformational coaching and so building relationships with these athletes are going to be important to me.”

Ros played five seasons at McGill, from 2011 to 2016, where the Martlets won the league championship every year under the guidance of head coach Ryan Thorne. She served as a co-captain in her last two seasons and guided the Martlets to a silver medal finish at Nationals in her fourth year. 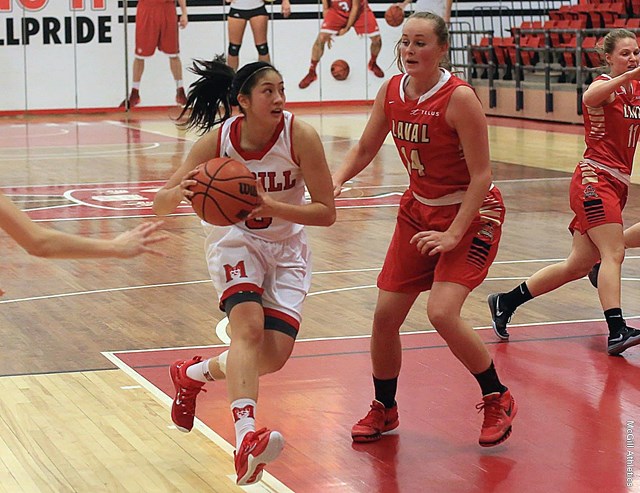 In 2013, she played with the Canadian national development team at the FISU Summer Games in Kazan, Russia, in addition to a stint with the Quebec provincial team at the worldwide Francophone Games in Nice, France.

During her freshman campaign, Ros earned RSEQ and CIS all-rookie honours, in addition to being named as the Quebec conference rookie of the year. She also merited second-team all-star status in each of her final two seasons. In 69 career regular-season contests with the Martlets, the 5-foot-7 point-guard tallied a school-record 235 assists in addition to 81 steals.

During her time at McGill, Ros was a multiple bursary recipient from the Quebec Foundation for Athletic Excellence, including awards for recruitment, athletic excellence and perseverance for overcoming adversity. In her final season as a player, Ros was the co-recipient of the McGill Martlets Leadership Award, presented to the player who best exemplifies the characteristics and qualities of being a member of the team.

Ros began playing organized basketball at the high school level with Ecole Secondaire de Saint-Laurent, where the Express won a civil league championship in her final year. She then played for the Québec U-17 provincial team. At the CEGEP level, Ros starred for College Montmorency, where she helped lead the Nomades to a perfect 25-0 season in 2010-11, en route to a Canadian Collegiate Athletics Association national championship.

Ros will make the move to Lennoxville and start her duties as women’s basketball head coach immediately.

The Bishop’s Gaiters will begin training camp in August with their first RSEQ regular season contest scheduled for Thursday, Nov. 3 against McGill in Mitchell Gymnasium.