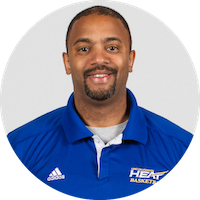 1. How did you first get involved in coaching? What was your path to your position as head coach of UBC Okanagan?

I first got involved with senior boys at Fraser Heights 2001 but the season was cut short due to a strike. In 2003, I moved to Vernon and a co-worker asked if I would help out at Vernon Secondary with the senior girls’ team. I said no for about two months but he was relentless and eventually I said yes.

I spent the next nine seasons at VSS and during that time I started coaching club basketball out of Vernon which after five years of running a club program, I joined forces with Jr. Heat and began to run the U17 program. In 2013, Heather Semeniuk asked me to join her and the coaching staff with the women’s program as an assistant. I wouldn’t be here without the opportunity she gave me 6 years ago.

Bill Conway, my teacher and first Basketball coach; my three high school coaches Glen Spurrell, Fran McHugh, and Tom King. One of the biggest influences was David Munro who really talked to me about what it met to be a professional at this level.

Passionate, intense, and a bit of a players’ coach.

Vince Lombardi, because of his hard work and he always knew how to get the most out of his players.

Also, he coached a senior boys’ basketball team (knowing nothing about basketball) for eight seasons going 105-57 - he just knew how to coach.

I would have to say running the “barking dog endline play” in a high school game.

Becoming a head coach at this level.

7. What’s the best advice you can give to an athlete and/or athlete’s parents

Hard work will pay off, focus on the things you can control, and never stop having fun.

I think the biggest thing that has changed is my understanding of the importance of building relationships with each player.

I didn’t fully understand that 10 years ago. Hard work and accountability has remained, and will be there for the rest of my coaching years.

Family time, watching a show/football, and listening to music.