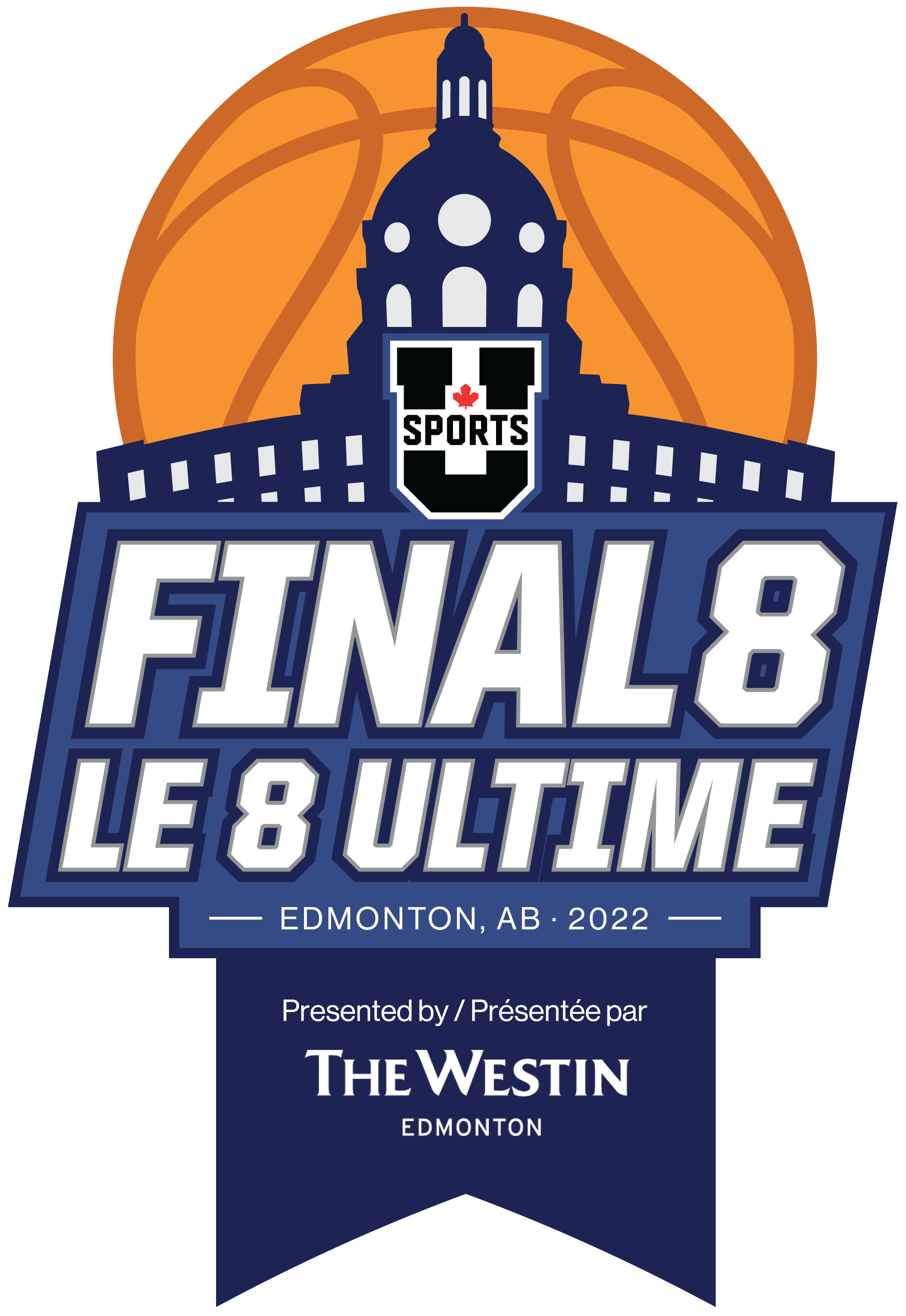 The reigning champion Carleton Ravens look to retain their title at the U SPORTS Men’s Basketball Championship Presented by the University of Alberta which opens in Edmonton later this week.

The Ravens, who lost in the OUA semifinals, are eyeing their third straight and sixteenth overall U SPORTS banner.

The 2022 U SPORTS Men’s Basketball Championship, kicks off on Friday at Saville Community Sports Centre and concludes next Sunday with the gold-medal game at 8:00 p.m. ET / 5:00 p.m. PT.

English digital coverage can be accessed on cbcsports.ca the free CBC Gem streaming service the CBC Sports App and usports.ca and in French on usports.ca. 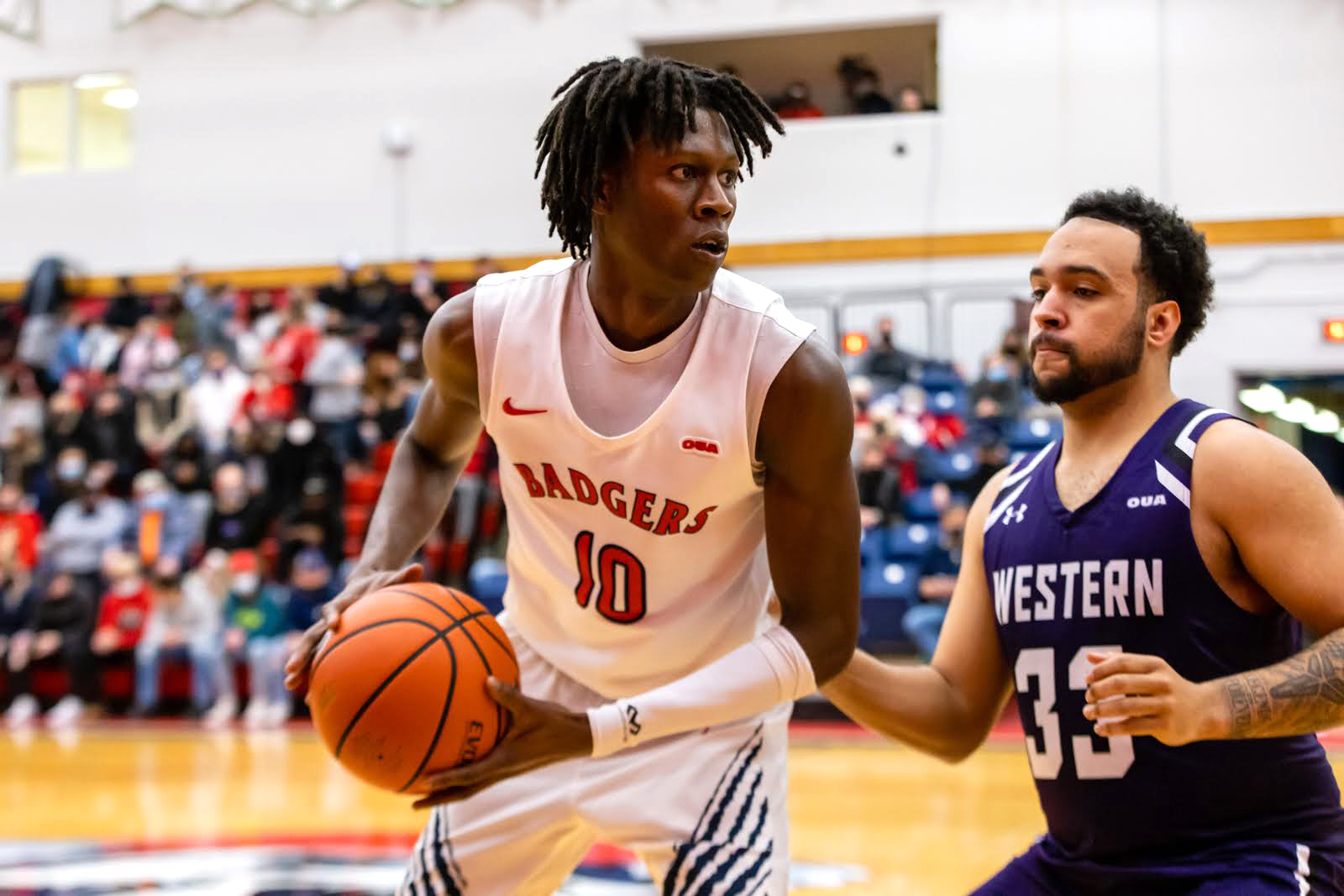 The Brock Badgers men’s basketball team is making its first trip to the U SPORTS Final 8 since 2018, when it finished fifth after a heartbreaking first-round loss to eventual-champion Calgary.

With coach Willy Manigat at the helm, the Badgers went 14-1 in the regular season this year, taking only one loss to McMaster in February. It gave Brock the Ontario University Athletics (OUA) West Division regular-season title and resulted in the No. 4 ranking in Canada.

Second-year guard Isaiah Bujdoso had a career-high 17 points as Brock opened the OUA Wilson Cup playoffs with an 82-58 win over Wilfrid Laurier on March 19. In the semifinal four days later, the Badgers ousted the No. 10 McMaster Marauders 88-75 in front of a home crowd at Bob Davis Gymnasium in St. Catharines.

It secured the Badgers their first trip to the U SPORTS nationals since going to Halifax, N.S. in 2018, and set up a Wilson Cup championship match at home against Queen’s on Saturday, March 26. It was Brock’s first appearance in a Wilson Cup final since 2005.

"Because we don't think of anything as big moments, we just focus on the current moment, every possession matters, every practice matters, every rep matters. That's been our message all year,” said Manigat, who was named OUA West Coach of the Year. “Our message is about staying locked into every moment. There was no nervous energy because we were just treating this like any other game, we wanted to put our best foot forward and play Brock Basketball.” 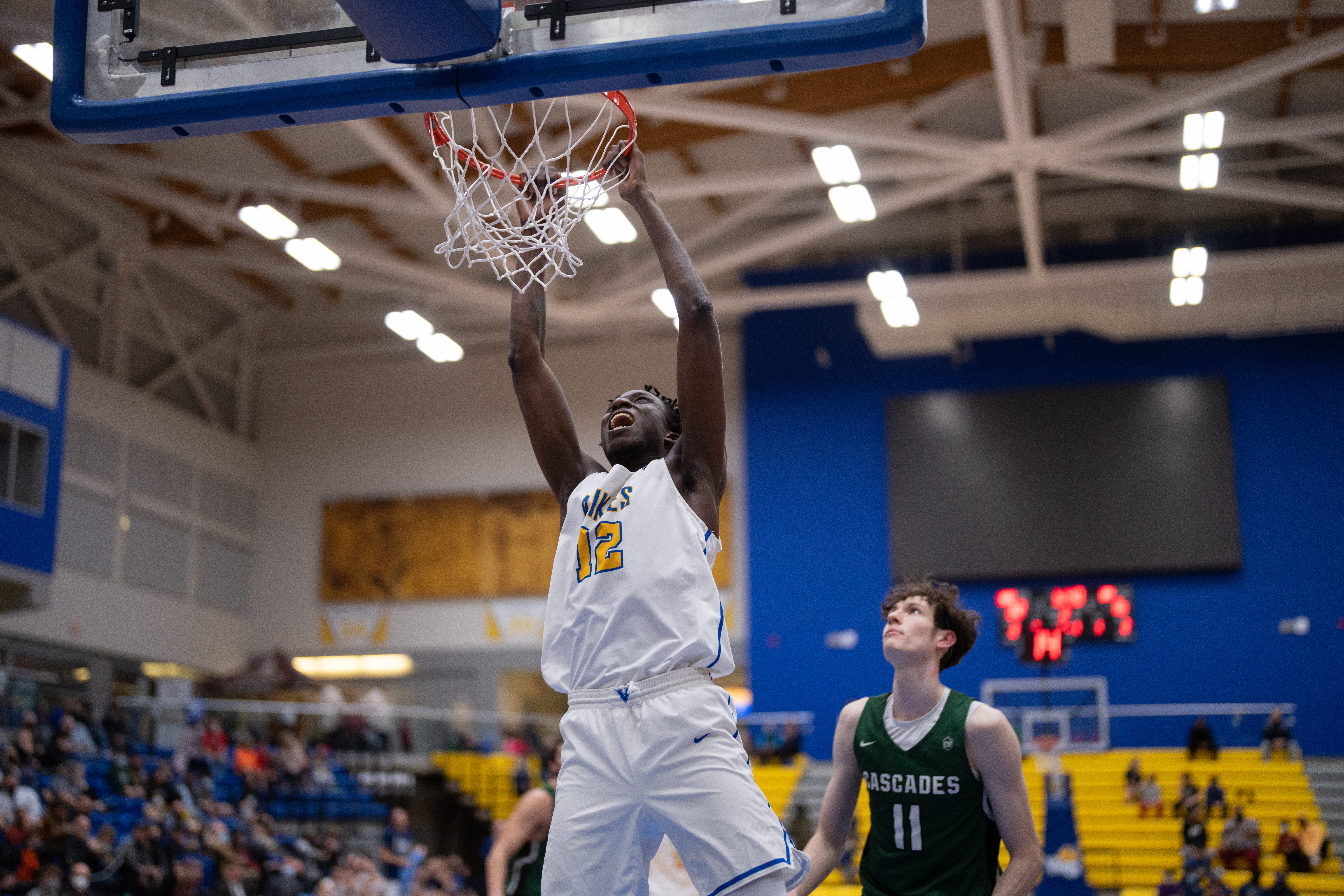 Picked to finish third in the Canada West Preseason Coaches Poll, the University of Victoria men’s basketball team came away from opening weekend with a 1-1 record, defeating Trinity Western and falling to UBC.

Despite the loss, the Vikes would bounce back, winning their next 16-straight games to finish with a 17-1 record, good for first place in the Canada West west division and capturing the second-overall seed in the Canada West tournament.

Holding the best team scoring average in Canada West, and second-best in U SPORTS (92.3 points per game), UVic recorded a season-high 107 points at Fraser Valley, Feb. 18. The Vikes finished its 17-1 regular season campaign with the best three-point shooting average in the nation, 37.6%.

On the court, the Vikes are led statistically by Canada West Second Team All-Star Diego Maffia (17.2 points per game) and Dominick Oliveri (9.0 rebounds per game). However, fifth-year floor general Scott Kellum has an impactful presence for the Vikes, with his 16.2 points per game average ranking second on the team. His 45.3% three-point percentage (39-for-86) ranks second on the team. 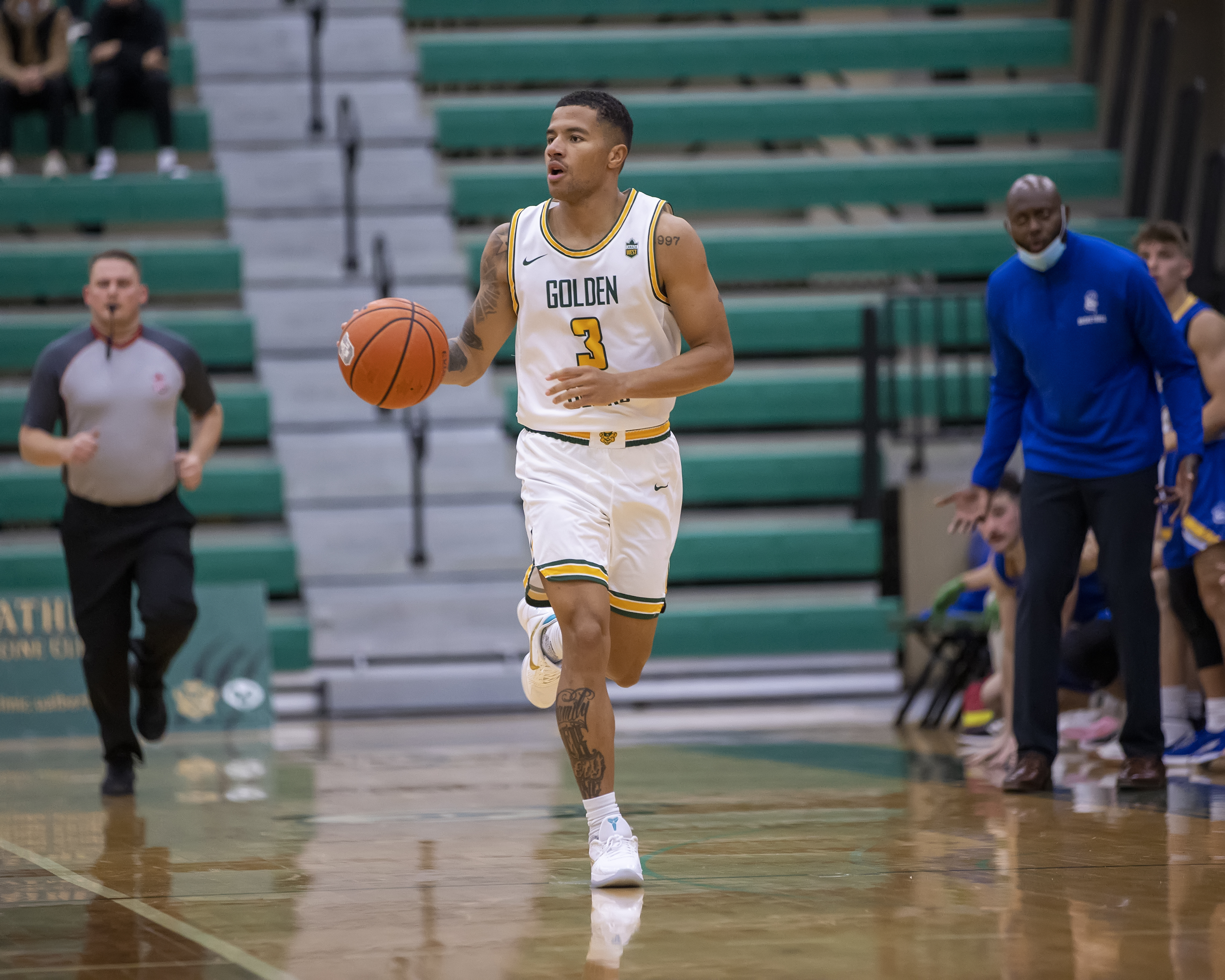 Hosting the U SPORTS Final 8 for the first time in school history, the Golden Bears welcome the nation’s best to Saville after completing one of the best regular seasons in program history.

Ranked 2nd in U SPORTS for a majority of the season, the Golden Bears went 16-0 during conference play, finishing with an undefeated record for the first time program history. Their only blemish this season came in the Canada West Final, losing to Victoria 70-64 in Edmonton.

The Bears will be looking for their fourth national title this weekend, and first since 2002. Leading Alberta is fifth-year guard Tyus Jefferson, who became the first male in conference history to be named both the Player of the Year, and Defensive Player of the Year this season.

Led by 2022 Canada West Coach of the Year Barnaby Craddock, the Bears boast both a top-five offence and top-five defence, and should be considered one of the tournament favorites this weekend in Edmonton. 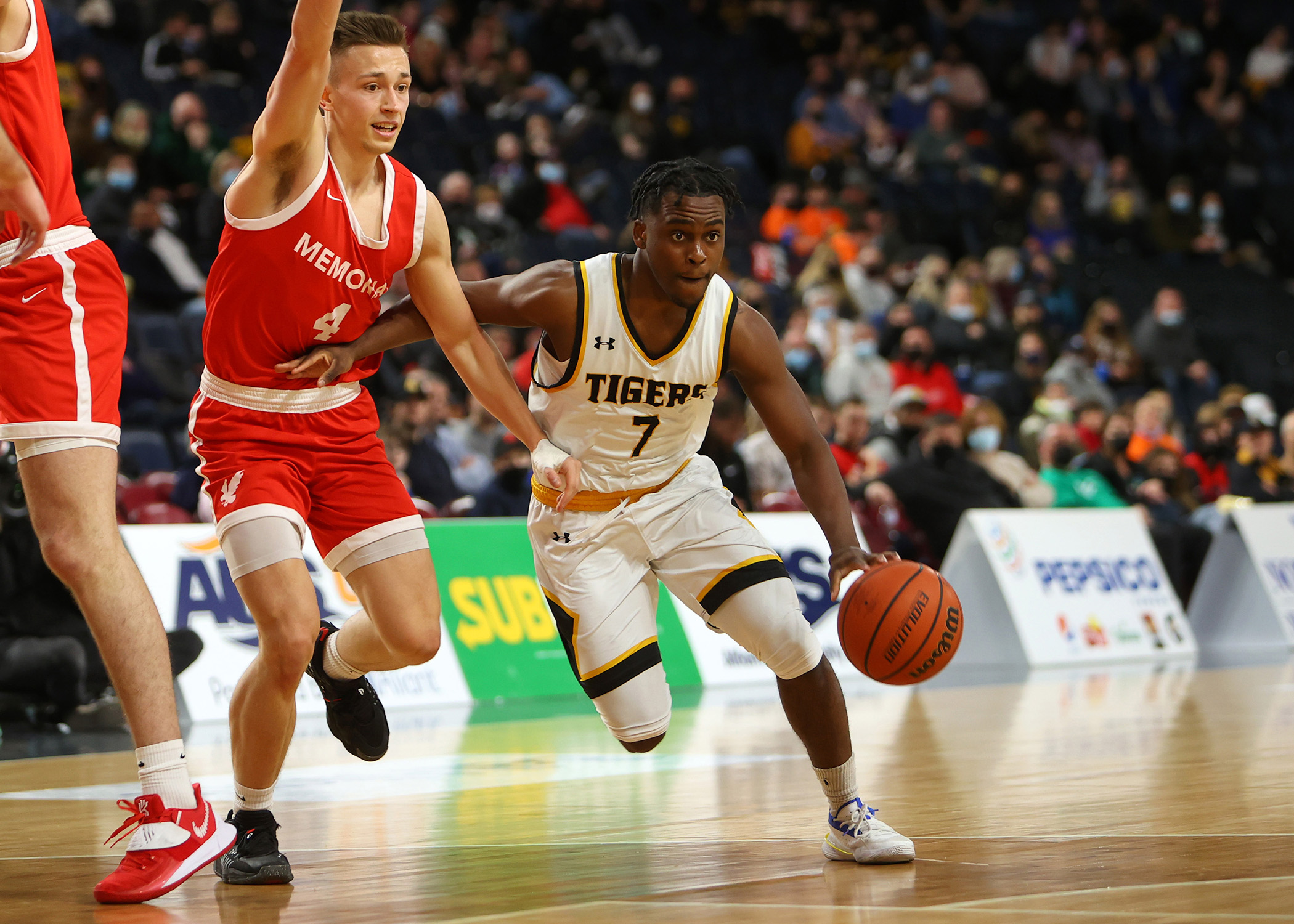 The Tigers went 7-2 in exhibition play to kick off their 2021-22 campaign. They went 3-1 in the first two weekends of competition and improved to 7-2 heading into the holiday break. Competition paused in early 2022, but when play resumed, the Tigers came out focused and won all five of their remaining regular-season games. They finished with a 12-2 record and the first place seed heading into the conference championships.

Led by fourth-year guard Keevan Veinot, the Tigers defeated the Acadia Axemen in the quarter-final round to face the Memorial Sea-Hawks in one of two semifinals. Dalhousie came out on top to advance to the championship final. The Tigers ended the weekend with an 84-78 win to capture their third-consecutive AUS championship banner. 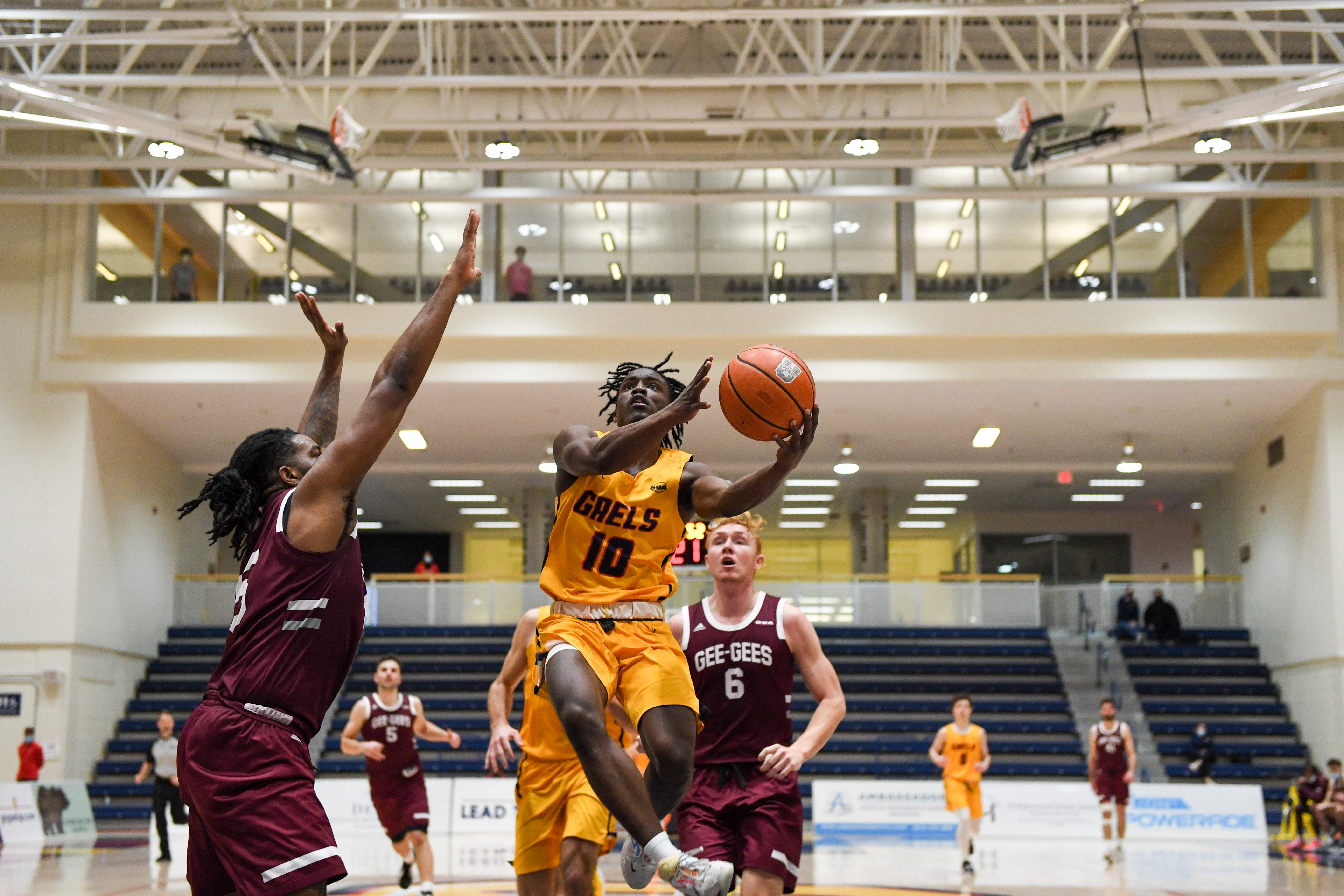 Queen’s Men’s Basketball is heading to nationals for the first time in program history. The Gaels defeated the No. 1 ranked Carleton Ravens 86-80 in the OUA East Final to advance to the OUA Wilson Cup and book their ticket to the U SPORTS Men’s Basketball Championship. The win came after defeating the Ottawa Gee-Gees 59-55 and the Nipissing Lakers 69-59 in the OUA Playoffs. 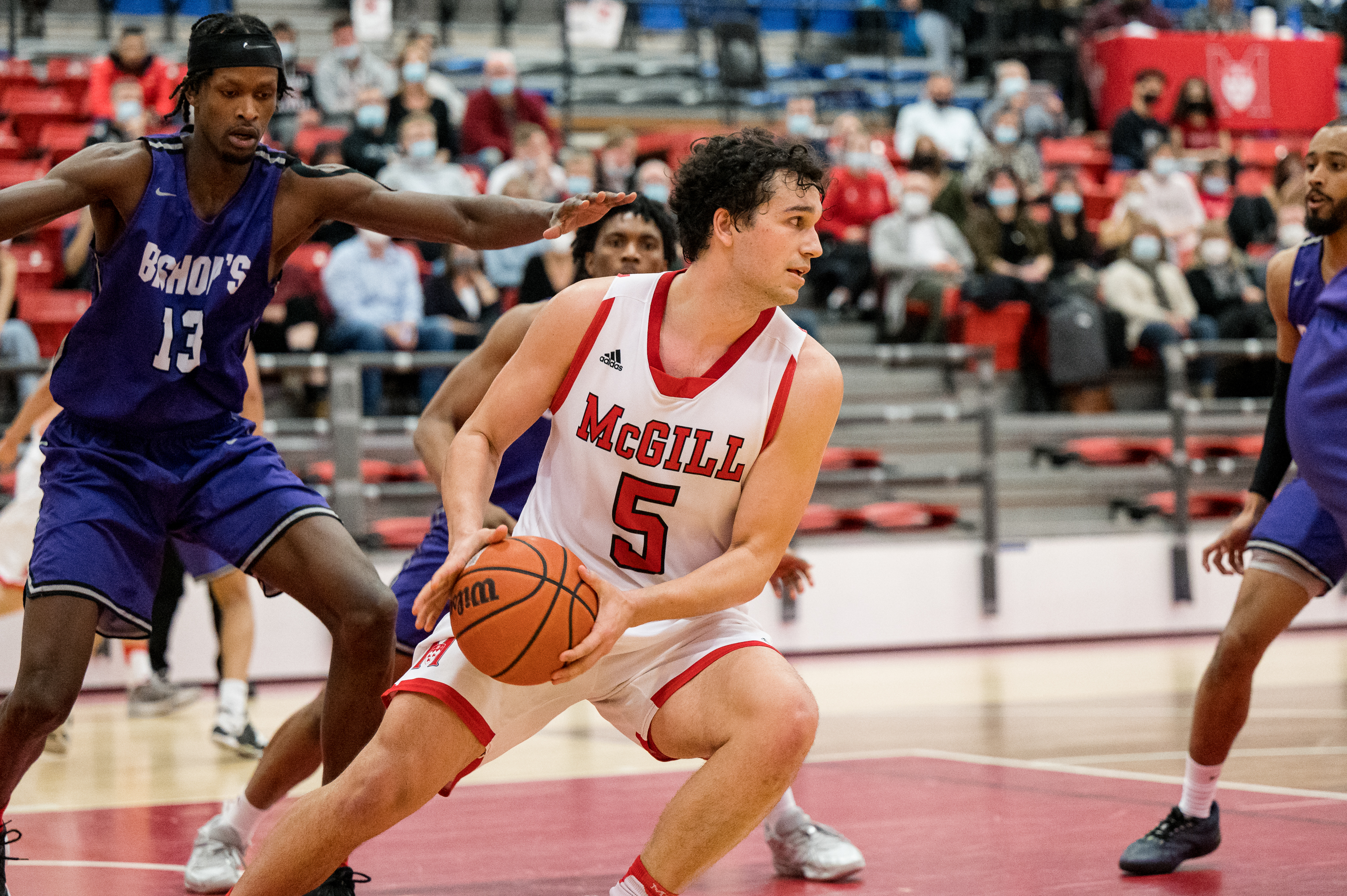 The 120th season for the McGill Redbirds has proved to be a fruitful one: after going undefeated in regular season play, they will be seeded sixth in the U SPORTS Final 8 to mark their ninth-lifetime appearance in the tournament and their first since 2018.  The last time that the Redbird’s were undefeated was 1934; this time they carry a 14-game winning streak and twelve conference wins to the tournament for their matchup with the Alberta Golden Bears.

The Redbirds come into the tournament with a top-five scoring defense that allows only 66.8 points per game. Seemingly loving the arc, the Redbirds have top-ten numbers in both three-point percentage (34.9) and three-point defence (27.3). The Redbirds also thrive on sharing the ball, ranking 3rd in assists per game (16.5).

A thriller was needed in the RSEQ Championship to edge out Concordia. The game featured the conference’s top two defenses and resulted in the lowest-scoring final in Quebec men’s league history. After Concordia hit a layup to cut the lead to two points with 13.4 seconds to play in the final, McGill needed a stop from its dominant defense. 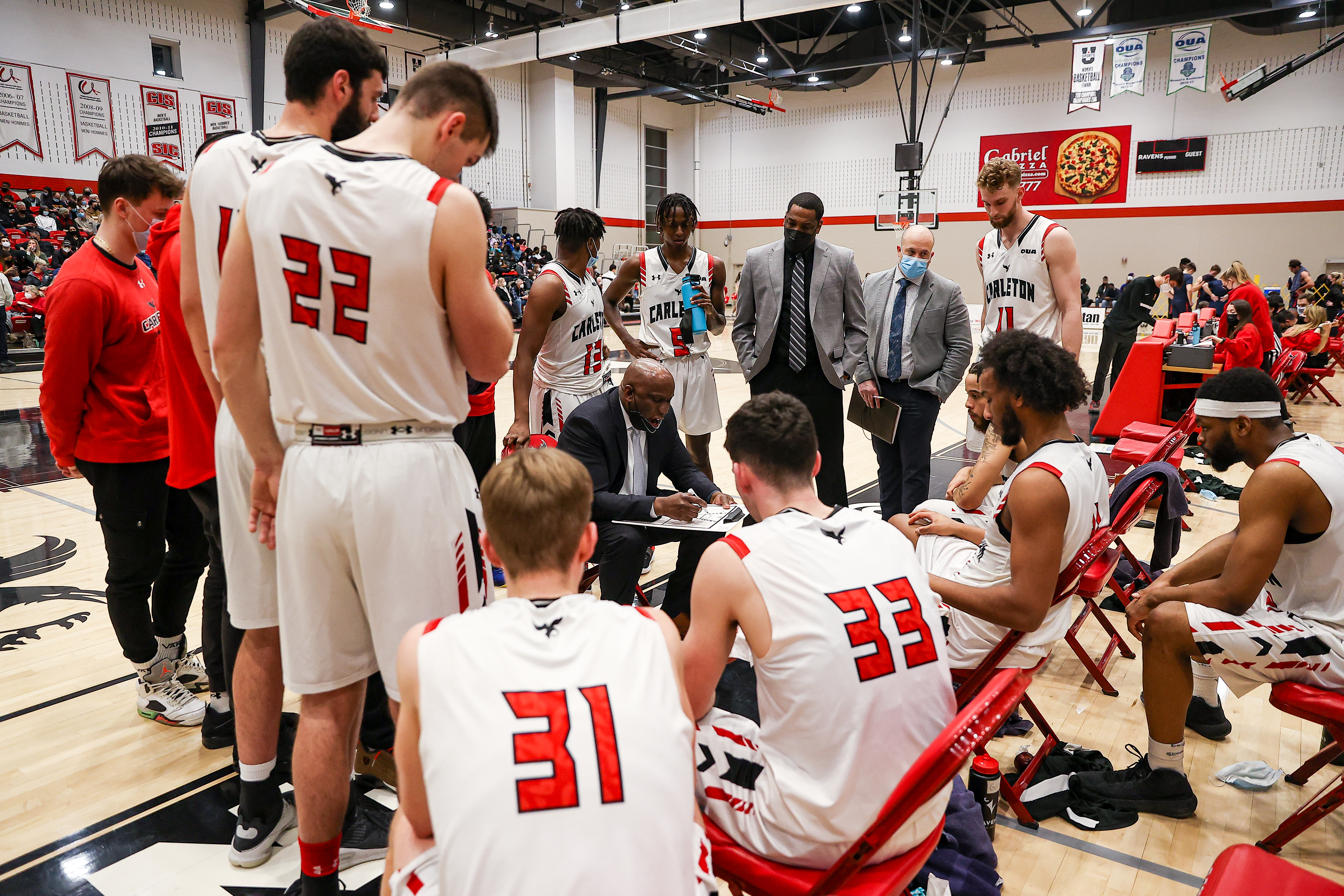 The 2021-2022 season marked the Carleton Ravens’ 9th undefeated regular season and first since 2017- 2018. After starting with a pair of weekend series at home against the Nipissing Lakers and Ontario Tech Ridgebacks the Ravens started the regular season winning four straight while scoring over 100 points on three of four nights.

After an early-season bye week, the Ravens travelled to York for their first road games of the season where they beat the Lions on back-to-back nights 92-71 and 87-48 before encountering an extending holiday and COVID-19 break.

When the season resumed the Ravens started the second half of their schedule on the road at Laurentian where the Voyageurs proved pesky competitors, despite the Ravens sweeping the weekend series 80-57 and 88-69. The Ravens would return home to continue their February schedule with a single game against the uOttawa Gee-Gees in what would be the 2022 Capital Hoops Classic. In front of an intimate crowd at the Ravens’ Nest, the home team used a hot second quarter to run away from their crosstown rivals on route to a 71-58 victory and 12th rivalry game victory.

The Ravens would resume their schedule the following weekend with a pair of victories of the UofT Varsity Blues, 75-70 and 80-63. After the weekend set against the Blues, the Ravens would face the GeeGees for a second time during a midweek encounter at Montpetit Hall. In another crosstown classic the Ravens would prevail 64-59 entering the season’s final weekend.

At the culmination of the OUA schedule, the Ravens would meet the Queen’s Gaels in a home-and-home and take the advantage early winning the first encounter 86-46. On the second night, this time at the Ravens’ Nest, the two teams would put on a shooting contest in the second half, lighting up the scoreboard as the Ravens prevailed in front of a sellout crowd 94-75.

After receiving a first-round bye as the top seed in the OUA East, the Carleton Ravens hosted the Ryerson Rams in the OUA East Semifinals. Lloyd Pandi narrowly missed out on a triple-double as the Ravens hit 12 three-pointers while the bench scored 21 points and the Ravens rolled past the Rams 87- 68. OUA East Finals After a thrilling back and forth game at the Ravens’ Nest on Wednesday night, the Queen’s Gaels are off to their first Wilson Cup Final. The Gaels got the best of the top-ranked Ravens in a wild 86-80 finish. 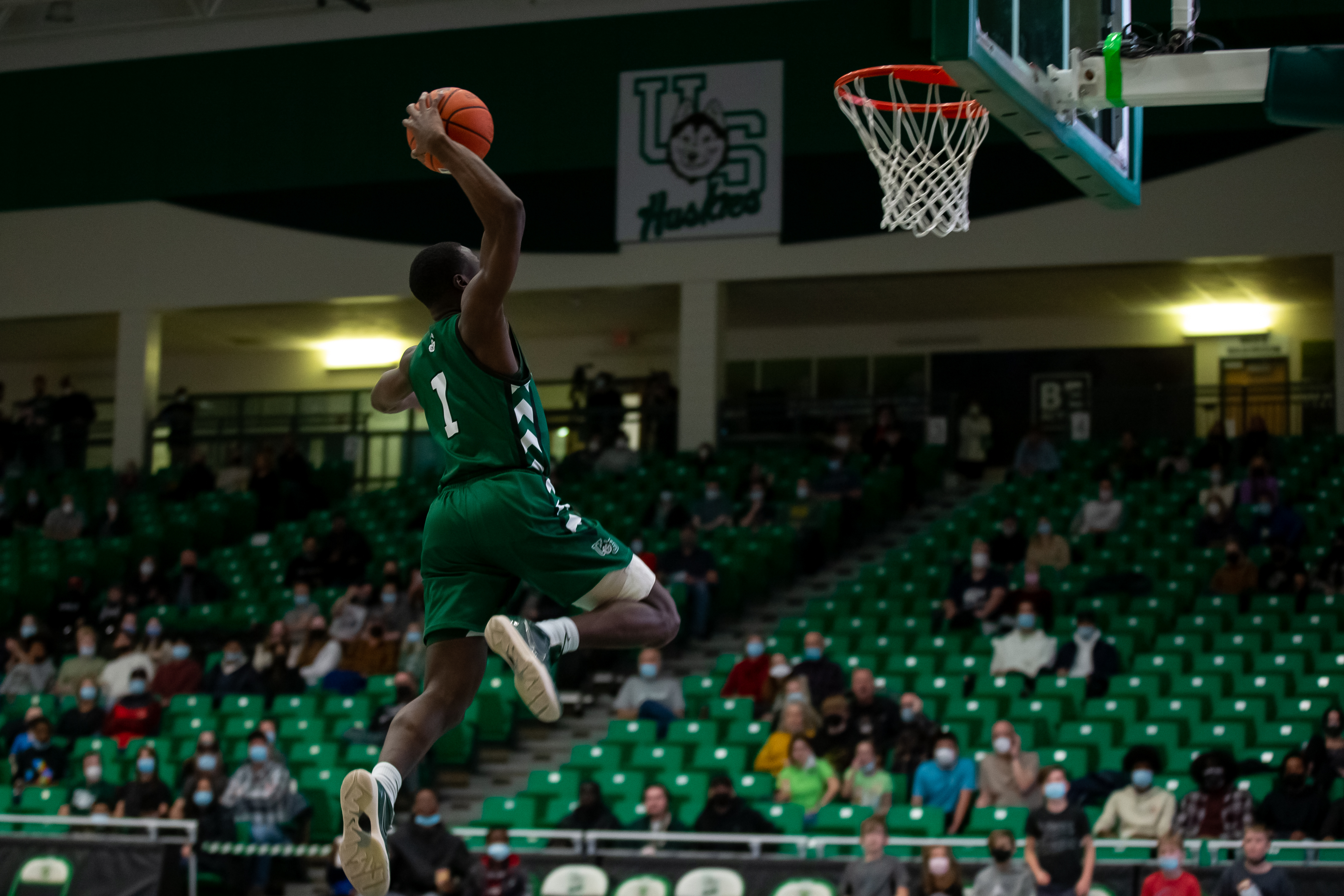 After a slow start, the Huskies found their groove. A starting lineup that consists of a pair of transfers in Nervens Demosthene and Marquavian Stephens took some time to gel with a trio of returnees in Maxwell Amoafo, Emmanuel Akintunde and Alexander Dewar.

Saskatchewan lost three of their first five games, but from there it was off to the races. The Huskies closed the regular-season as winners of nine of their last 11 and entered the playoffs as one the hottest teams in the nation. Marquavian Stephens was a big reason why, as the Fliint, Mich. product made an instant impact, leading the team with 19.4 points-per-game. Stephens went on to be named a Canada West second-team all-star after finishing third in the conference’s scoring race. The turnaround can be traced back to a weekend sweep of the Manitoba Bisons on home court, with Stephens recording 28 and 19-point performances.